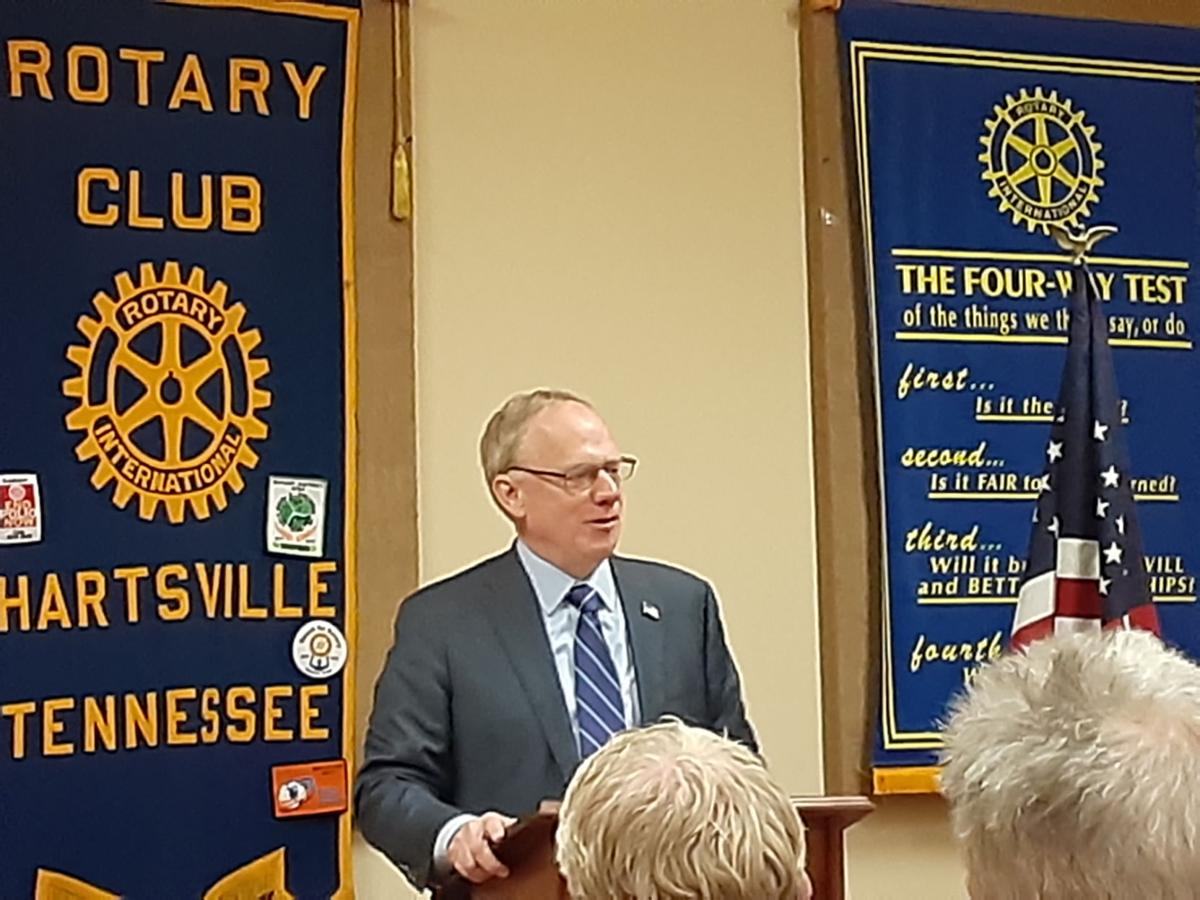 U.S. Congressman John Rose addresses the audience during last week’s meeting of the Hartsville Rotary Club. Rose spoke on legislation currently before Congress and his reasons for seeking elected office. 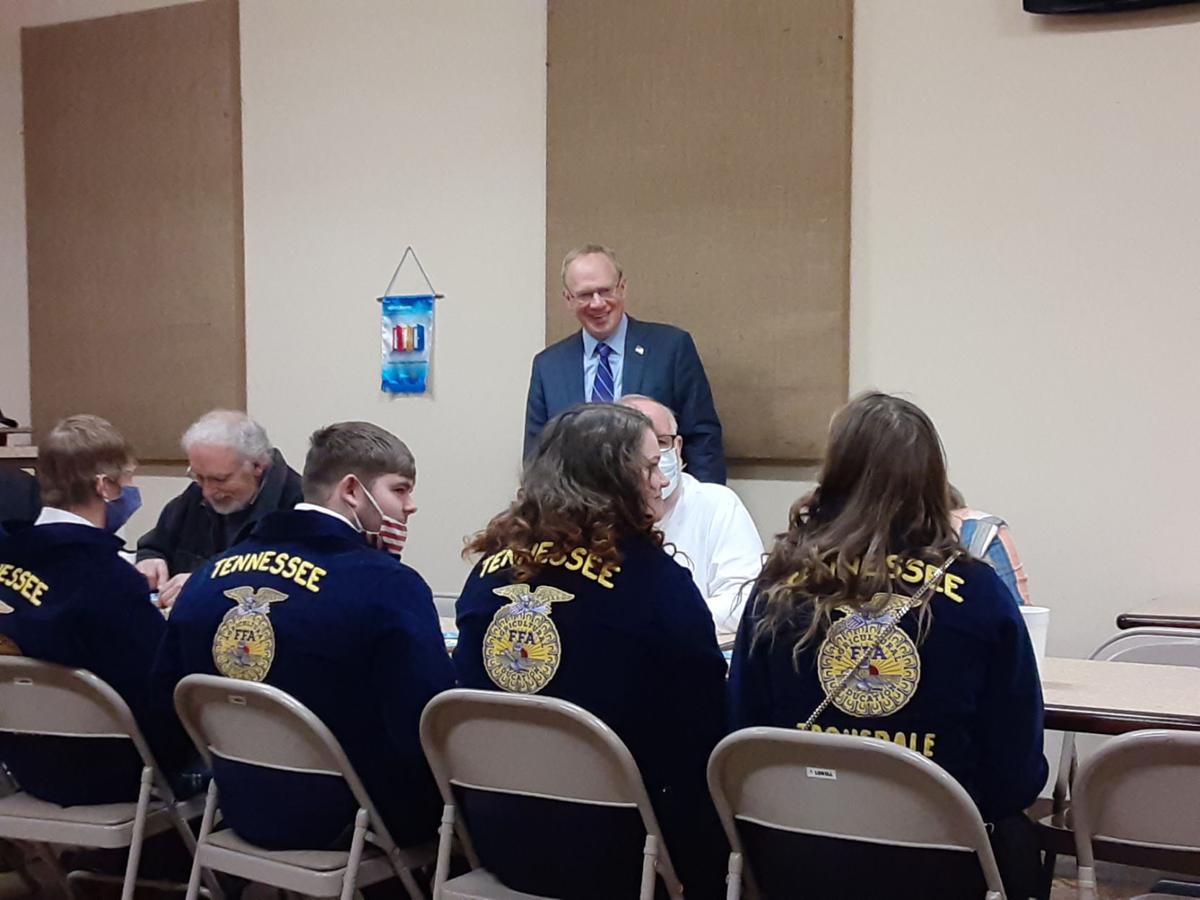 U.S. Congressman John Rose addresses the audience during last week’s meeting of the Hartsville Rotary Club. Rose spoke on legislation currently before Congress and his reasons for seeking elected office.

U.S. Congressman John Rose was the guest speaker at the Jan. 28 meeting of the Hartsville Rotary Club and spoke on a number of topics, including economic relief and the government’s response to the coronavirus pandemic.

Rose, a farmer/businessman from Putnam County, was re-elected in November to a second term representing Tennessee’s Sixth District in the House of Representatives.

“Thank you for inviting me to be with the club today; it’s an honor to be here,” Rose said to the audience, which included the county mayor, director of schools and members of Trousdale County High Schools’ Future Farmers of America chapter.

Rose praised “the resilience of the people of Tennessee” and noted recent improvements at the state and local level with COVID-19.

“Tennessee’s done better than the nation,” he said. “The rest of the country should be looking to this state to see how to navigate the waters.”

The congressman said “one-size-fits-all solutions” did not help and said each state being free to adjust to its own circumstances allowed everyone to see what ideas worked and could be incorporated elsewhere.

Rose said getting America past the COVID-19 pandemic was the most important challenge the country currently faces and that people needed to get back to work and kids back to school.

He praised cooperation between the government and the private sector to approve and roll out vaccines, noting that vaccines routinely take years to develop but that a COVID vaccine took a matter of months.

“It was the free enterprise system of our great system that got that done,” Rose said. “It is critical to returning the nation to good health.”

With regards to another economic stimulus package, Rose said he supported “timely, targeted, temporary relief” but did not elaborate on specific proposals.

Rose also spoke on trade, saying America had become too dependent on cheap goods from foreign nations that were not always friendly to the U.S.

“We’ve gone too far toward embracing trade with the hope that the other side would behave fairly; that’s not true,” he said.

With regards to the Jan. 6 demonstrations at the U.S. Capitol, Rose said he condemned the actions of those who stormed the building.

“In a manner I think was inexcusable and should be investigated and punished, we saw a mob that decided to enter the Capitol illegally and did some real harm,” he said. “Like all the violence you’ve seen over the last year or so, it should be responded with a powerful response from the government.”

Rose also defended his decision to support challenges to the Electoral College count, which were ultimately denied.

“Congress has a role; some think it’s ceremonial but there is a process for objecting. I concluded that there were a number of state where the will of the state legislatures had been overridden by the courts or other elected officials,” he said. “I thought that deserved an airing.”

Rose also decried the increasing use of executive orders by both the Trump and Biden administrations, saying Congress had delegated too much of its authority and needed to reassert itself.

“That’s not the way this country’s supposed to work,” he said. “Congress has a role and responsibility… It happens because it’s easy to pass a broad bill and say. ‘Y’all figure it out.’ All of a sudden, it’s a wholly different outcome.”

The congressman also took questions from the audience, including on the increasing partisanship in Washington, how bills were passed and the national debt.

Rose reiterated his desire to leave a better country for the next generation, which he cited as his reason for entering politics.

“There’s been a time-honored tradition in this country that we have passed on to each succeeding generation in better condition than we received it from our parents,” Rose said. “That’s what prompted me to run for office…

“It’s going to take some work for that to happen; we’ve got to roll up our sleeves and do some very hard work in the days ahead.”