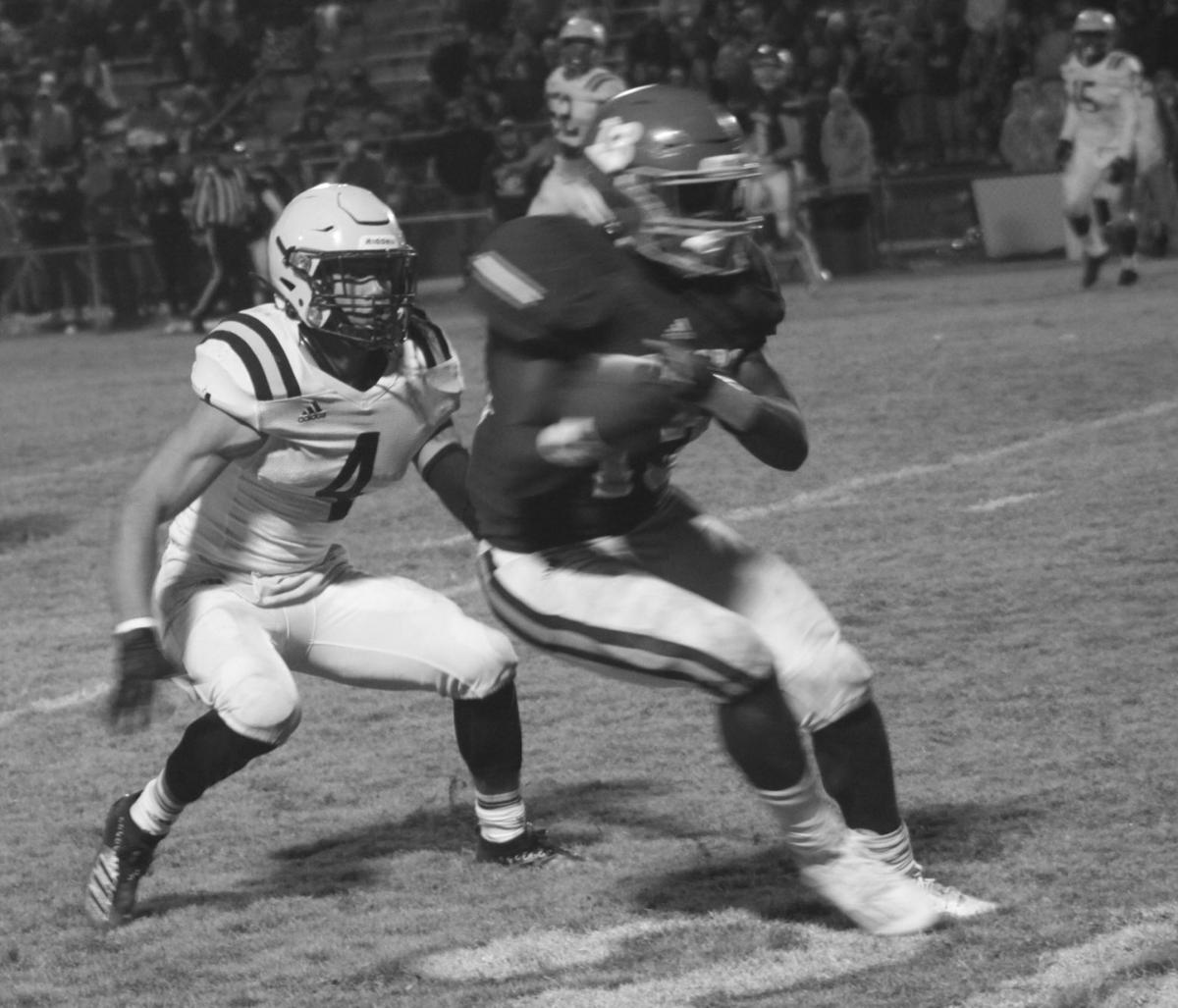 Trousdale County’s Sebastian Linarez (4) closes in to make the tackle on a Bledsoe County receiver during Friday’s game. 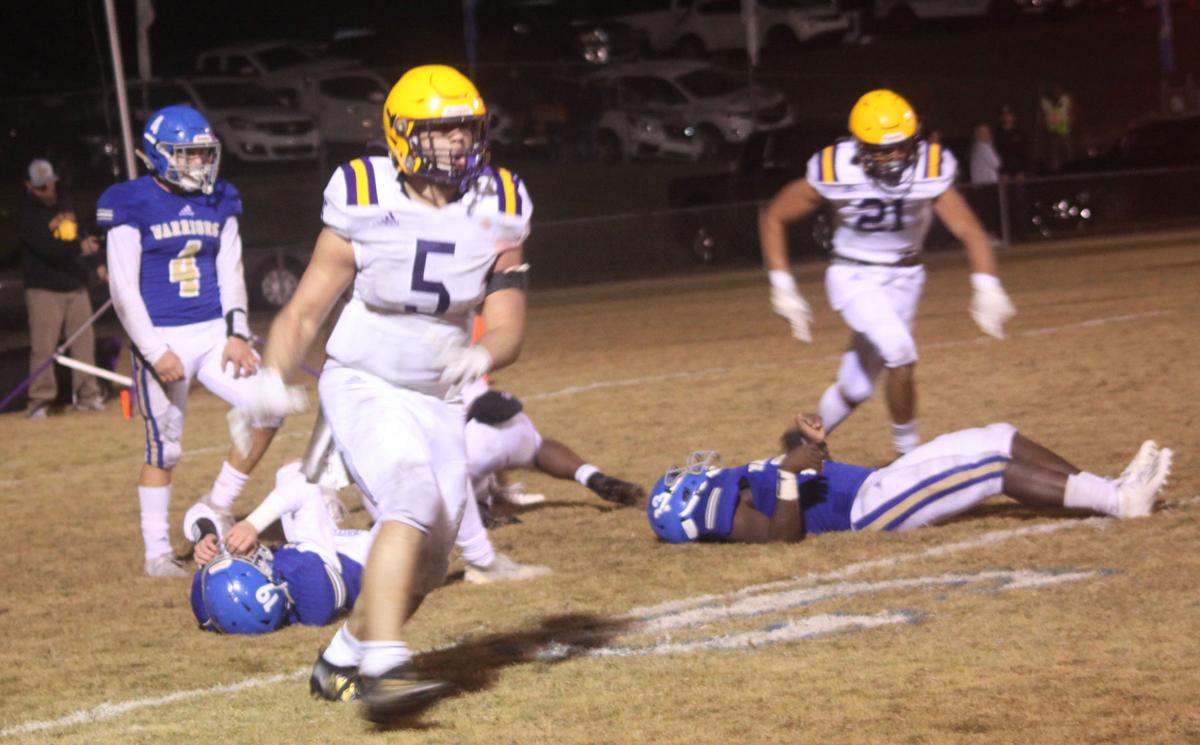 Trousdale County’s Cameron Rankins (5) and Keenan Burnley (21) begin to celebrate after an incomplete pass on the last play of the game. The Jackets defeated Bledsoe County 14-7 in the second round of the playoffs.

Trousdale County’s Sebastian Linarez (4) closes in to make the tackle on a Bledsoe County receiver during Friday’s game.

Trousdale County’s Cameron Rankins (5) and Keenan Burnley (21) begin to celebrate after an incomplete pass on the last play of the game. The Jackets defeated Bledsoe County 14-7 in the second round of the playoffs.

Trousdale County’s Yellow Jackets outlasted Bledsoe County 14-7 in the second round of the playoffs Friday in a game that was in doubt until the final play.

The Jackets (10-2) had to knock down a pass in the end zone as time expired to hand the Warriors (11-1) their only loss of the season.

“I preached it all week; they are 11-0 for a reason,” TCHS coach Blake Satterfield said. “It doesn’t matter what schedule you play, if you are 11-0 and undefeated at this time of year it means something.

“I told our guys that it would come down to the team that makes the least amount of mistakes and the team that wanted it more, and that’s exactly what it came down to.”

The teams battled through a scoreless first half, although Trousdale County missed two chances to get on the scoreboard. One drive that covered nearly 50 yards ended on a fumble when a pitch from senior Cameron Rankins to classmate Jordan Pickett went off target and was recovered by Bledsoe.

The Jackets would drive into Bledsoe territory late in the first half, but a 42-yard field goal try on the next-to-last play of the second quarter was off the mark.

Trousdale County would finally break the scoring stalemate in the third quarter as the Jackets put together a 10-play, 58-yard drive that was capped by a 21-yard touchdown run from senior quarterback Jayden Hicks. Classmate Heath Chasse’s kick gave the Jackets a 7-0 lead.

Bledsoe County did not go down easy, using its ensuing possession to even the score with 7:15 to play. Senior Brady Turner caught a 1-yard touchdown pass from junior Harmon Keith and junior Tristan Boring tied the game with his kick.

The touchdown came after Bledsoe County converted a fourth down near midfield by completing a 39-yard pass.

Trousdale County showed its resolve and experience on its final drive, as the Jackets went 80 yards in 14 plays and took 6:27 off the clock.

The Jackets thought they had scored on their first play when junior Bryson Claiborne broke off an 80-yard run, but a holding penalty pushed the ball back and set the Jackets up with first and 14. On the next play, Rankins fought through the Bledsoe defense for a 14-yard gain to get the drive started.

“Those are little things that present adversity to your football team and we were able to overcome that,” Satterfield said. “We were able to physically move their defensive line up front. That’s the thing we had to do tonight.”

The drive continued and ended when Rankins again dragged defenders and burst through the line for a 10-yard touchdown with 48 seconds remaining. Chasse’s kick made it a 14-7 game.

“We just didn’t let it get us down; we got back up,” Rankins said of the penalty and ensuing drive. “Coach (Paul) Pitts has talked all year about championship drives and killing the clock. That’s what that was.”

The Jackets thought they had ended the game with a Kane Burnley interception, but officials ruled the Bledsoe receiver had caught the pass, preserving the Warriors’ chances.

Bledsoe would make it to the Trousdale 25 with 1.2 seconds left, but Keith’s pass into the end zone was knocked to the ground by senior Alex Ford to clinch the victory.

Rankins led the Trousdale offense with 82 of the Jackets’ 250 rushing yards on 15 carries. Pickett added seven carries for 68 yards while Hicks had 55 yards on seven rushes. Claiborne had 10 runs for 35 yards and Ford three runs for 10 yards.