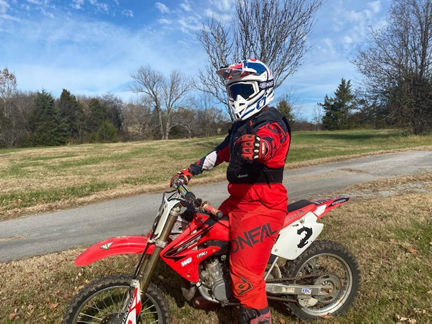 Hartsville’s Caden Hall races dirt bikes on local tracks, while his friend Eli Hix races in the woods and other off-road sites. 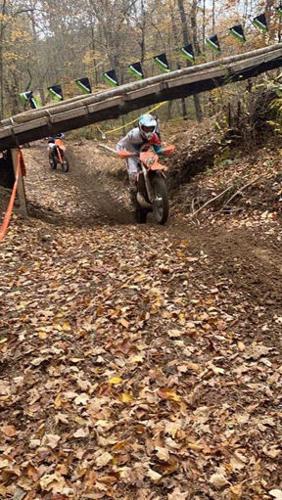 Hartsville’s Caden Hall races dirt bikes on local tracks, while his friend Eli Hix races in the woods and other off-road sites.

For two Trousdale County teens, it’s not the roar of the crowd at a football or basketball game that gets their competitive juices flowing. Instead it’s the roar of a dirt bike.

Both Caden Hall and Eli Hix, have been racing competitively across Tennessee for some time. Hall said he started roughly a year ago, while Hix has been racing for “two or three years.” Both also hope to inspire other youths to take up racing.

“I race motocross, which is wide-open tracks with jumps,” Hall said, “Eli races GNCC (Grand National Cross County), which is woods racing through the hills.”

One of Hix’s recent races was near Gatlinburg and went through the woods in the Smoky Mountains.

Both youths race as amateurs, meaning they compete for pride rather than money.

“We are the only two riders in Hartsville that race,” Hall said.

Hall said most of his races are in the Middle Tennessee area, while Hix does much more traveling because of his chosen specialty.

“His last race was in Red Boiling Springs,” Hall said of Hix.

Hall competes in the RaceTN Series, which holds events across the state. He described one recent event at the Smith County Fairgrounds in which tractors were used to set up dirt tracks and jumps.

“They go around to different fairgrounds and fairs and make tracks,” he said. “I’ve raced at Smith County, DeKalb County and others.”

RaceTN offers various age groups from young children to professional adults, according to its website. In Hall’s division, 250 MC, the bikes can get up to around 60 miles per hur while moving around the track, he said.

Hix has won two races thus far while Hall has yet to win, “but I’ve come close,” he said.

Hall recently suffered a wrist injury but hasn’t let it slow him down.

“It happened in a practice run and I ended up crashing pretty hard. When I picked up my bike I couldn’t squeeze my hand.

“We took my glove off and wrapped two fingers together with athletic tape. I was able to pull my clutch handle in and use the rest of my body to control the bike.”

Hall said he acknowledges the risk of injury but said he wants to continue racing well into the future.

Both got started in racing through watching friends in other communities. Hall said a friend in Lafayette who races got him interested.

“He built his own track along the side of his house and I said, ‘This looks cool and would be cool to get into this.’ ”

Hall saved up his money through working to buy his first bike and has local friends who help him maintain and repair it as necessary.

“My goal is to get more people involved with this sport. It would be awesome to get more riders into this,” he said.