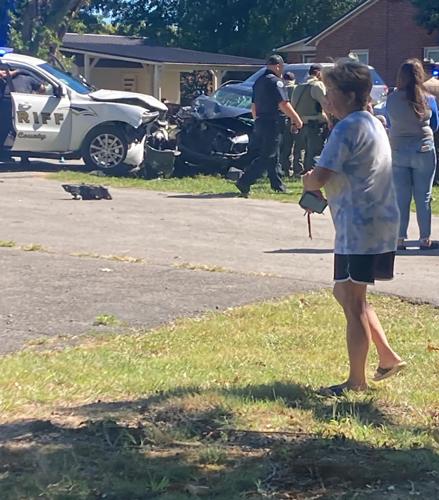 Law enforcement and residents of nearby Central Elementary School look on after a police pursuit of an alleged speeding driver ended when School Resource Officer Aaron Shipley rammed his police vehicle into the oncoming car. 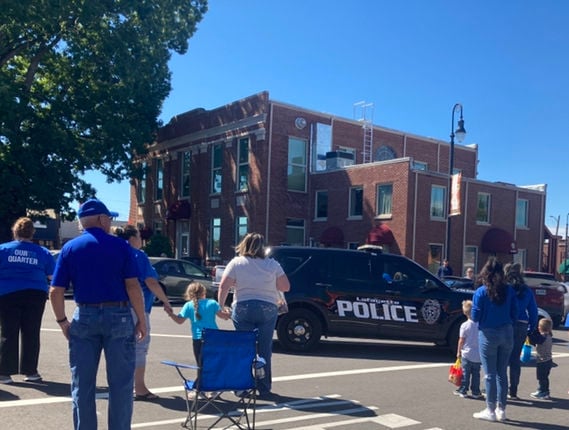 Officers leave the square during Friday’s homecoming parade to go respond to a pursuit. 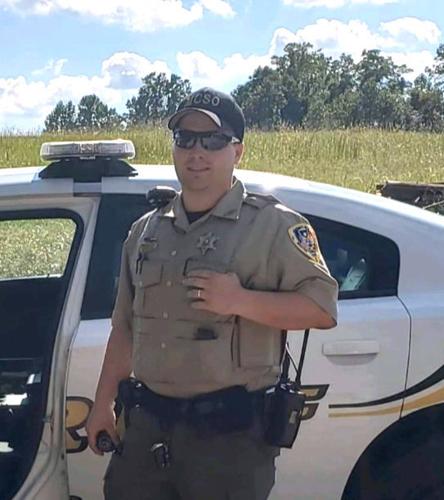 Law enforcement and residents of nearby Central Elementary School look on after a police pursuit of an alleged speeding driver ended when School Resource Officer Aaron Shipley rammed his police vehicle into the oncoming car.

Officers leave the square during Friday’s homecoming parade to go respond to a pursuit.

A Macon County elementary school resource officer is being credited for saving lives Friday after he slammed his vehicle into a speeding car that was heading toward the Macon County High School Homecoming Parade route.

Lafayette City Police officers were trying to stop the vehicle, driven by James S. Corum, 51, of Lafayette in a pursuit heading into the city.

Corum was eventually northbound and fleeing police on Sycamore Drive, according to a Tennessee Highway Patrol preliminary report.

Corum was LifeFlighted to Skyline Hospital in Nashville. Shipley was treated for injuries at Macon Community Hospital.

Witnesses said that Corum was swerving and driving in the direction of elementary-school kids who were in line to see the parade.

While children were moved farther back or inside the school, second-grade teacher Brittany Johns was one of the last standing outside with a few children.

She took a step back, and Shipley made sure the man could not drive any further.

“Officer Shipley put his life on the line for myself and my kids,” Johns said.

With her voice still shaking, she shared that she should have been underneath the speeder’s car.

She was 2-3 feet away from where the crumbled black vehicle landed.

“I am blessed,” Johns said. “Myself, nor none of my kids were injured, not even a scratch. The mental repercussions may take longer to heal.”

“The school system will have counselors at the school (this) week to help them heal. Officer Shipley is a real hero. It’s defined as someone who puts their life on the line to save others.

“He saved more than just me, my kids too.”

Shipley said that he was listening to the radio calls about a black vehicle racing past residents, homes and schools and would not pull over for the blue lights behind him.

Shipley got a message to get any children waiting on the parade outside to move them back in the building. Shipley’s children were at the school where he works.

“I knew all the kids come first,” Shipley said. “I don’t take any credit for this. The Lord just used me to assist in getting these kids safe. He called on me, and I was his servant that day.

“I barely remember getting in my vehicle and driving straight into his car. I know I got out of the SUV (sport-utility vehicle) and going over to arrest him, but all emergency vehicles were right there. The EMTs were going over any injuries I had. Remarkably, I only had a few bruises but did go in for an evaluation.”

Macon County Schools interim director Daniel Cook issued a statement on Friday afternoon that read, “During today’s parade, an uncontrollable driver came through the parade route. Macon County Sheriff’s Department, Lafayette PD, and other city agencies responded to this situation. A Macon County Sheriff’s Deputy rammed the driver preventing injuries to any students. The parade was stopped, buses began routes, and students were dismissed at 2:30 pm. Macon County Schools is so appreciative of all responders and the quick reaction by the faculty and staff of LES (Lafayette Elementary School) and Central Elementary that prevented this from becoming so much worse. Several of our students are upset due to witnessing this situation. Each school will be prepared to address counseling concerns, etc., at the beginning of next week.”