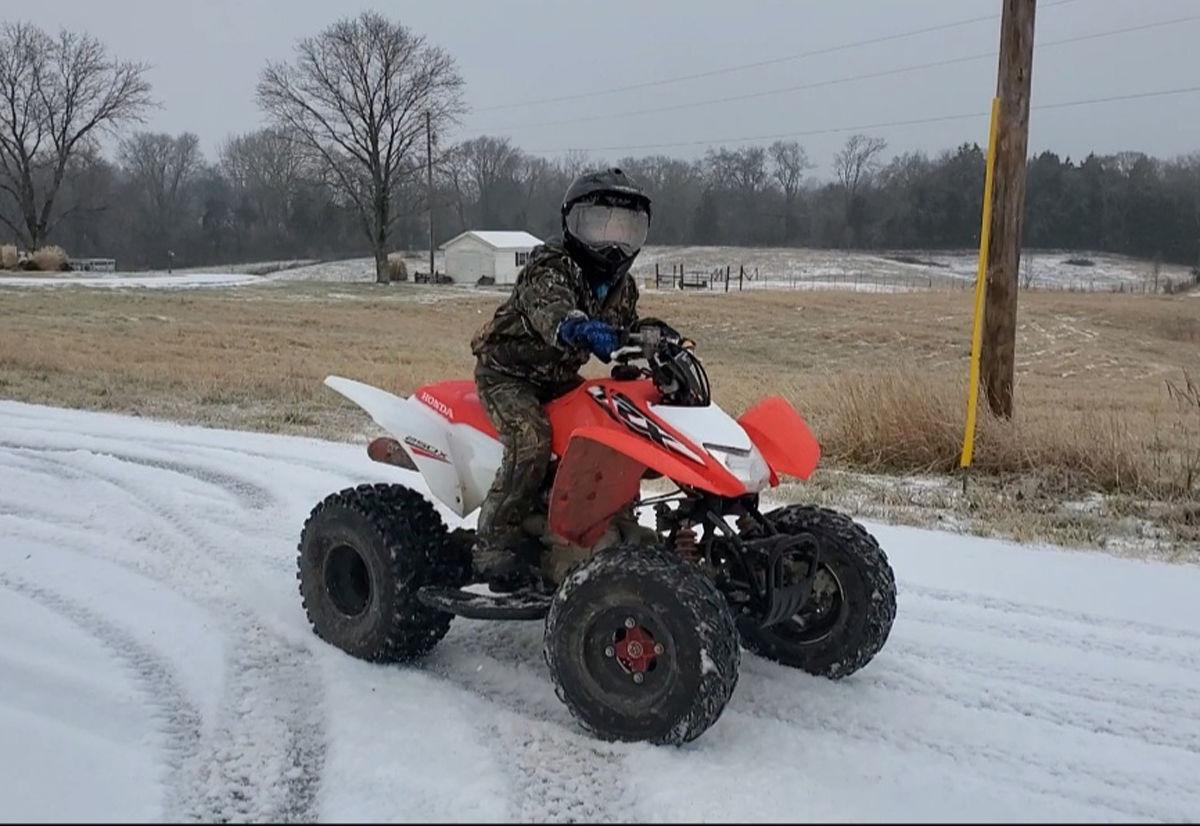 Jacob Jones enjoys the winter weather on his four-wheeler. 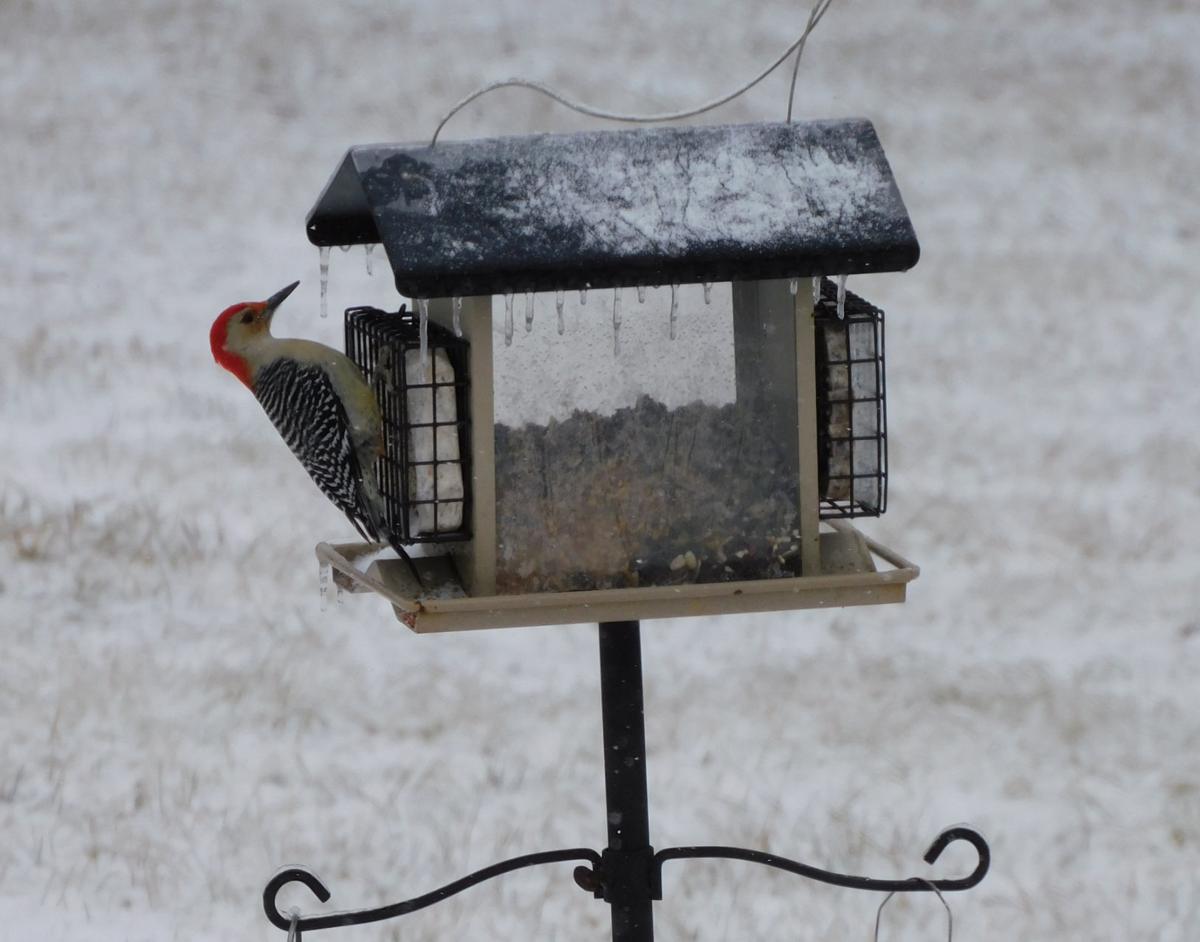 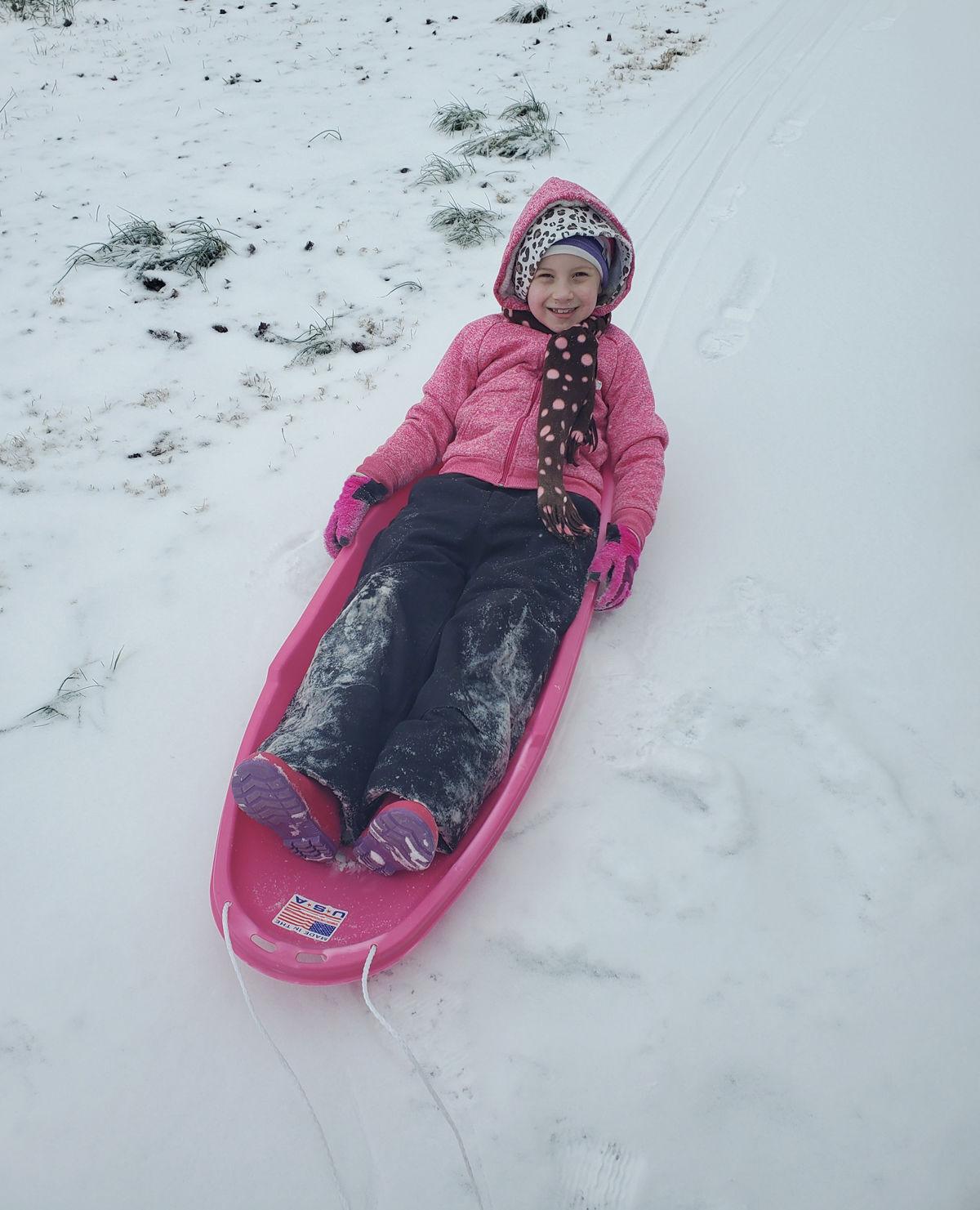 A young girl enjoys sledding in the snow. 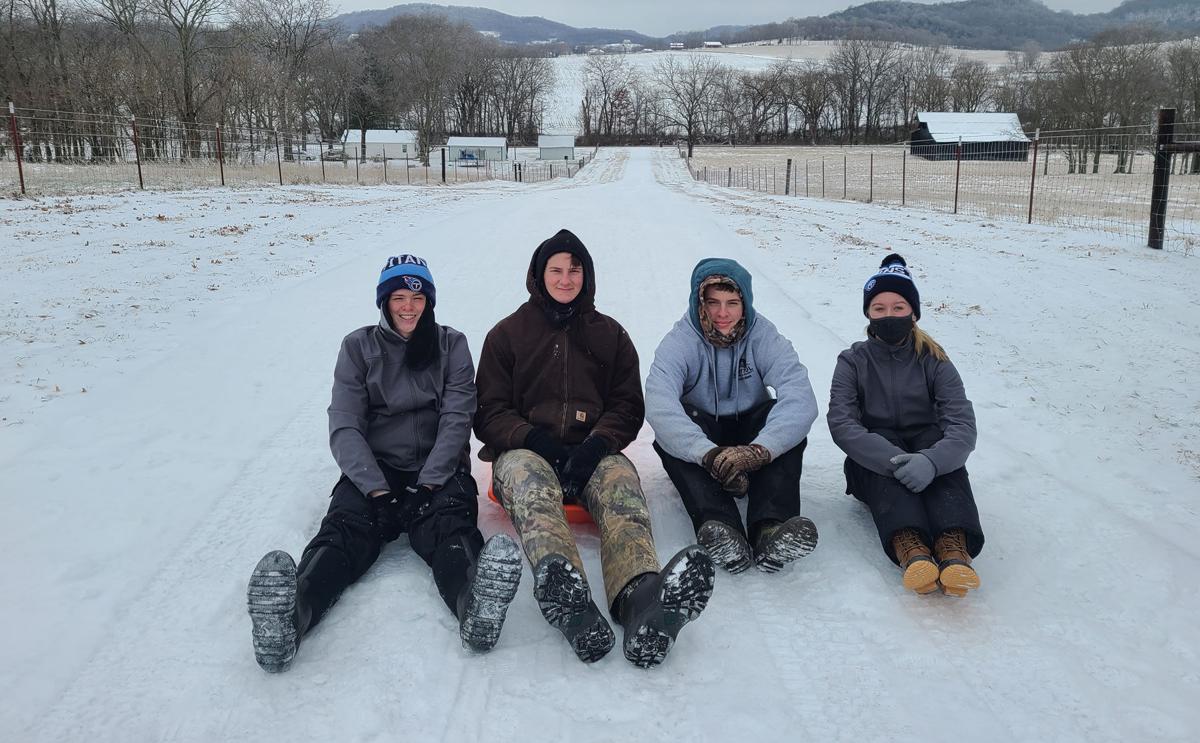 Local youths enjoy the winter weather in this photo submitted by Betsy Carman. 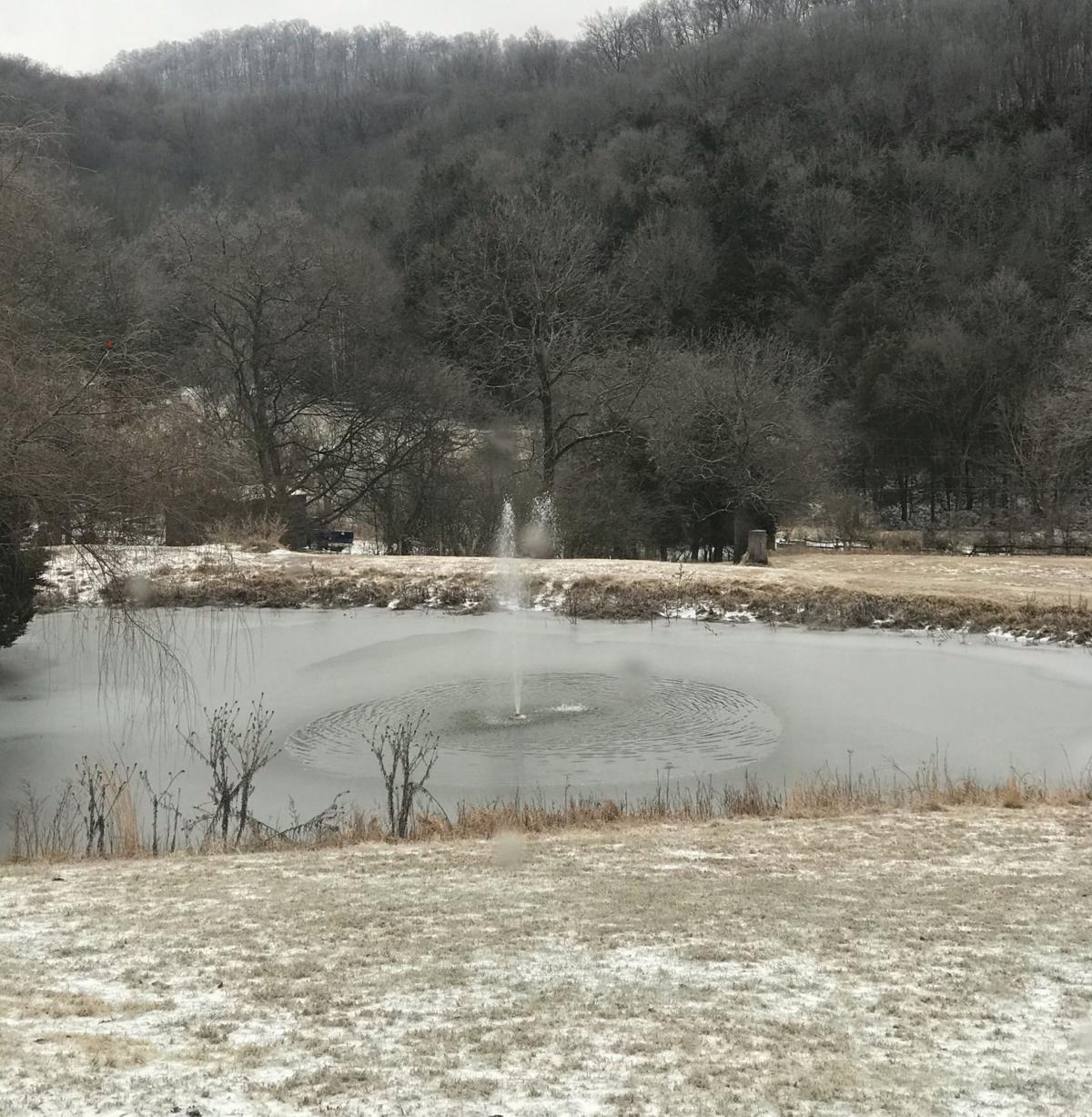 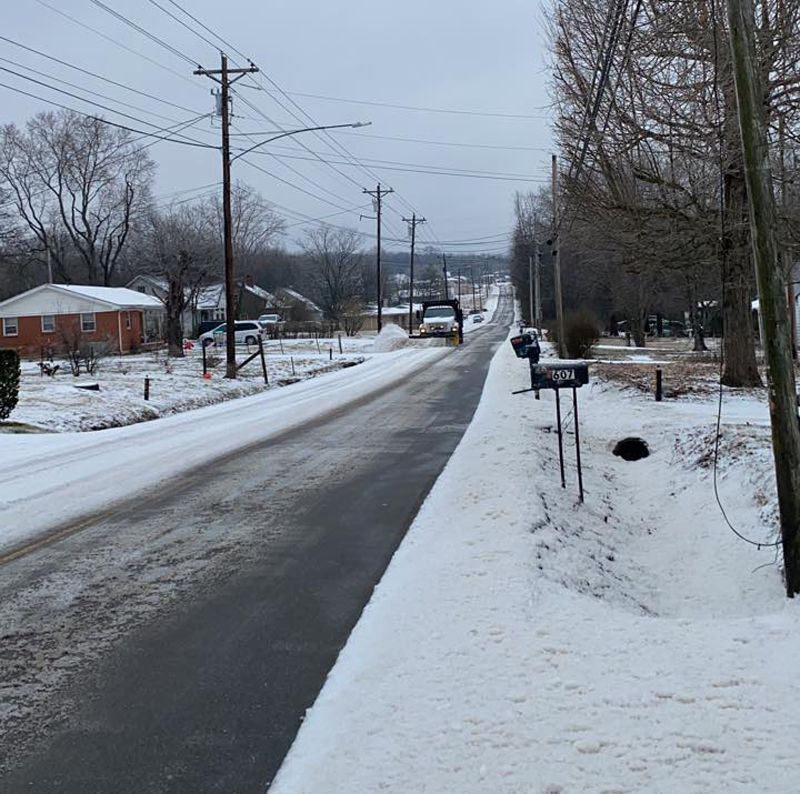 A Highway Department truck works to clear ice and snow off of Main Street.

Jacob Jones enjoys the winter weather on his four-wheeler.

A young girl enjoys sledding in the snow.

Local youths enjoy the winter weather in this photo submitted by Betsy Carman.

A Highway Department truck works to clear ice and snow off of Main Street.

Freezing rain, sleet and snow brought much of Trousdale County to a halt as the week began, with businesses closing early, schools closed and people urged to stay off the roads whenever possible.

Trousdale EMS Director Matt Batey said people seemed to be following that advice. As of Monday Batey said EMS had only responded to two crashes on Highway 231. One of those temporarily shut down Highway 231N just north of the four-way intersection after a semi had to be removed from the shoulder of the road.

Trousdale County Deputy Bryan Pemberton suffered minor injuries Sunday morning when he encountered black ice and skidded off the highway while driving to work. In a Facebook post, the Sheriff’s Department said Pemberton would be back at work Monday.

Trousdale County Schools were already closed Monday because of the Presidents’ Day holiday and were closed Tuesday and Wednesday as well. The Lady Jackets’ basketball team had been scheduled to play Monday evening to open the District 6-A Tournament, but that game was postponed with no makeup date announced at press time.

County government offices were closed Tuesday and Wednesday as well, including the Administration Building.

“After speaking with the Highway Department, Emergency Services, and the Sheriff, I have asked all officials and departments that can close (Tuesday) to do so. We will reevaluate the conditions tomorrow afternoon and make a decision for Wednesday,” County Mayor Stephen Chambers said in an email announcing Tuesday’s closure.

State offices were also affected, with Gov. Bill Lee ordering the closure of offices in 67 counties across West and Middle Tennessee.

Even the local business community was affected, as Hartsville Taco Co., Dillehay’s Café, the Mexican Grilled Cheese and Farmer’s Harvest all opted to close on Tuesday. Hartsville Foodland closed early on Monday as well.