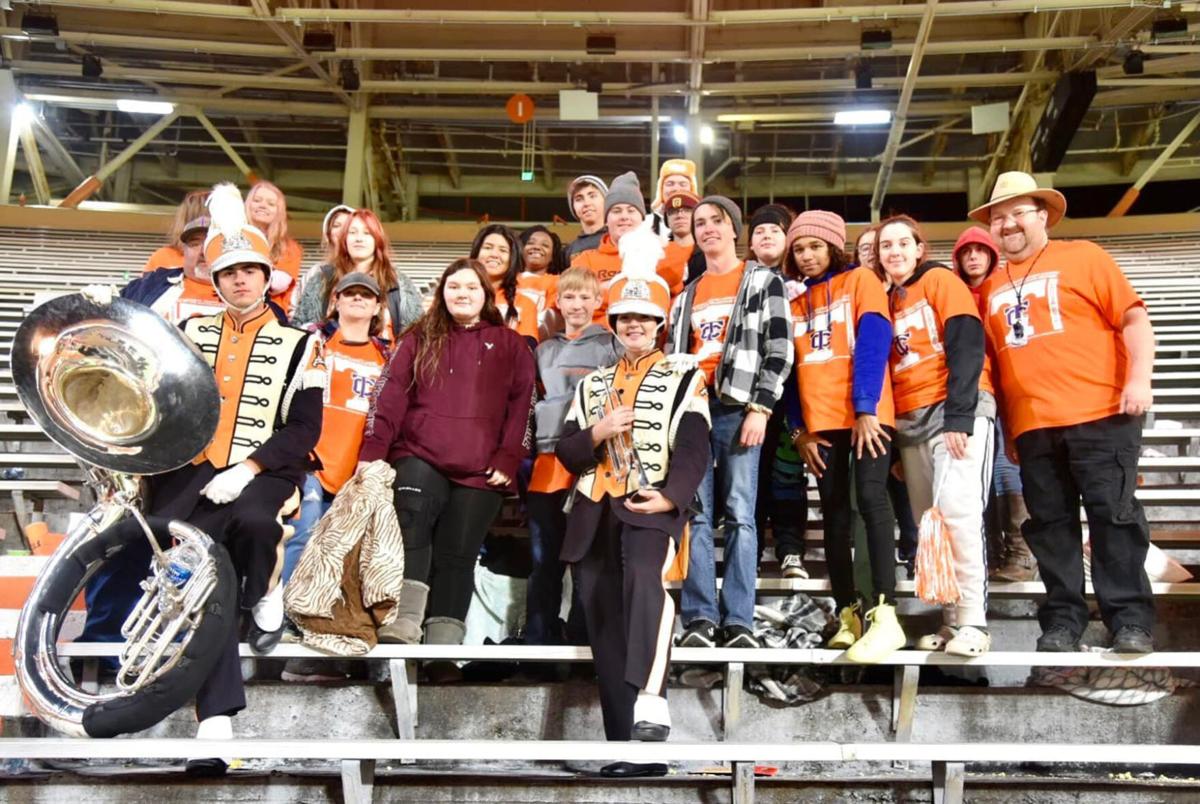 Trousdale County band personnel pose with former students Noah Cartwright, left, and Caroline Guffey, right, who both are part of the University of Tennessee’s marching band. 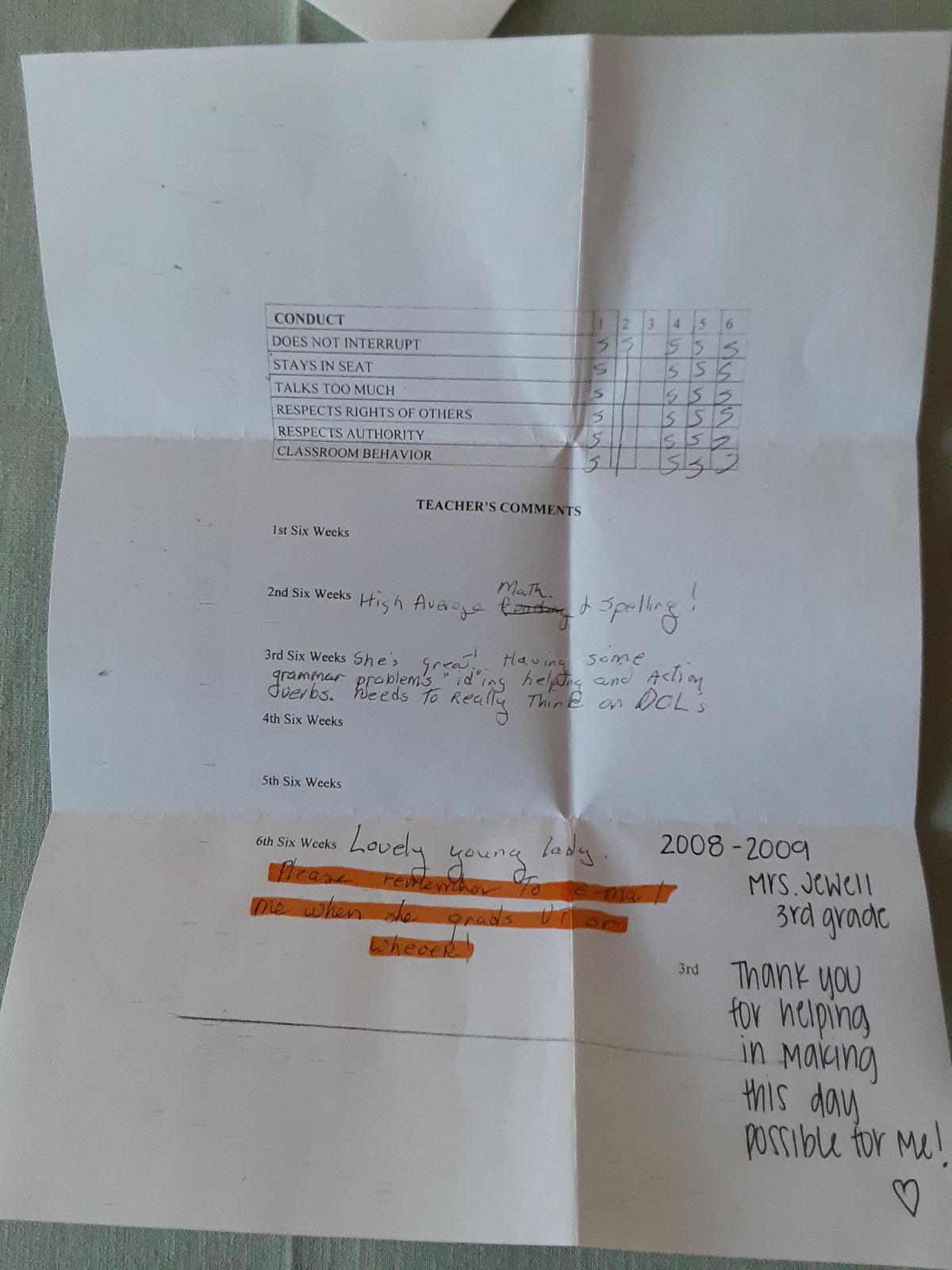 Caroline Guffey’s third-grade report card contained a note from her teacher about graduating from UT in the future. Guffey did just that, earning her degree earlier this month.

Trousdale County band personnel pose with former students Noah Cartwright, left, and Caroline Guffey, right, who both are part of the University of Tennessee’s marching band.

Caroline Guffey’s third-grade report card contained a note from her teacher about graduating from UT in the future. Guffey did just that, earning her degree earlier this month.

Members of Trousdale County’s Marching Yellow Jackets took a surprise road trip to East Tennessee last month to honor two of their own.

Trousdale band director Rob Joines organized a trip by the students to Knoxville on Saturday, Nov. 27, the day after the Yellow Jacket football team played at Hampton, to watch TCHS alumni Noah Cartwright and Caroline Guffey perform with the University of Tennessee’s Pride of the Southland Marching Band.

“We had a high level of secrecy around this. The kids knew for three months and didn’t tell the UT students that we were coming,” Joines said.

“We took around 30 students and chaperones to that game and made a day of it,” Paxton told the School Board during last week’s meeting. “They got to tailgate, saw the Vol Walk. Mr. Joines coordinated with Southeast Impressions and we had these shirts made.

In addition to being the final game of the season, it was also the last home game for Guffey, a senior who was honored at halftime on the Jumbotron at Neyland Stadium.

“I was out practicing and saw them in the corner. I thought it was the coolest thing that they get to see a 350-piece band compared to a 30-piece,” said Guffey, who plays the trumpet. “I t was really cool for them to do that and the T-shirts were great. I loved it.”

“I thought it was a wonderful gesture. It was a nice surprise,” added Cartwight a junior tuba player at UT. “I’m really thankful for Mr. Joines and Mr. Paxton’s support through my time in high school and in college.

“It was also awesome to the all the high schoolers get the opportunity to see a college band and what that experience is like, so they see the opportunities that lie ahead of them.”

Guffey graduated earlier this month with a bachelor’s degree in neuroscience with a minor in psychology. She will be moving to Florida soon to attend chiropractor school but intends to return to Tennessee.

In earning her degree, Guffey also took time out to acknowledge those who have supported her along the way. As a recipient of the Hartsville Rotary Club’s annual scholarship, she sent a thank-you card and invitation to her third-grade teacher, Martha Joe Jewell, who is now retired.

In that card, Guffey included a copy of her third-grade report card on which Jewell had written, “Lovely young lady. Please remember to email me when she grads UT or whoever!”

“I remember her doing that because my brother was graduating UT that year. So we dug back and looked for and found the card; it was really cool,” Guffey said.

Jewell said she was touched that Guffey remembered that gesture after almost 15 years.

“She’s an outstanding young lady, a Rotary scholarship winner. She’s incredible and her family is as well,” Jewell said.

Additionally, former TCHS students Eric Loerch is on band scholarship at Bethel University and Mackinzie Vaughn is in the band at Western Kentucky this year.

“We want the citizens of Trousdale County to know that we take their investment in us seriously, and we try to give them ‘the most bang for the buck’ when it comes to results,” Joines said. “Our school system’s mission statement is, ‘Accelerating & Graduating All Students for the Careers of Tomorrow,’ and we want to do our part.”