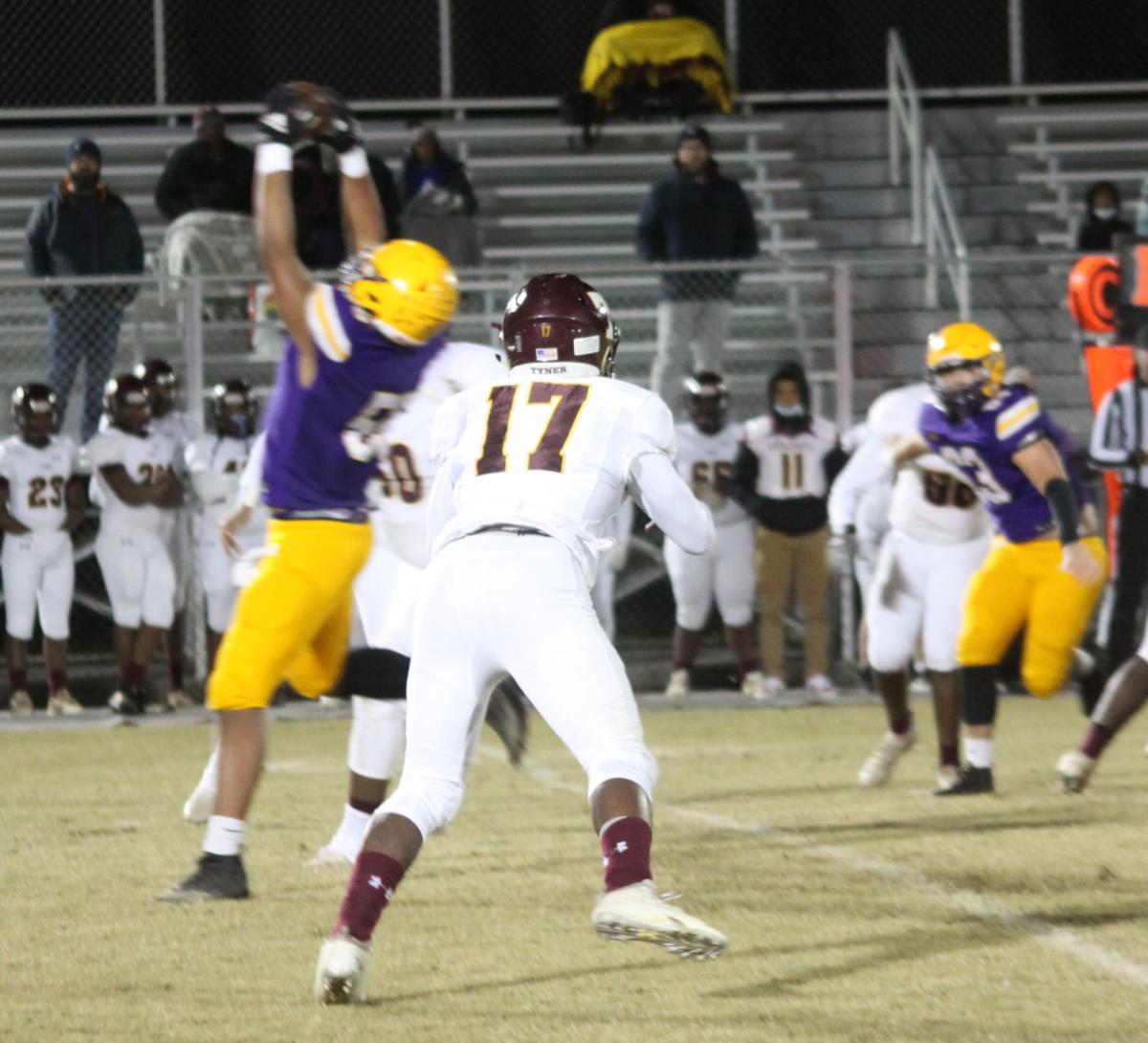 Trousdale County’s Xavier Harper, left, grabs a pass intended for a Tyner receiver during the first quarter Friday. Harper returned the interception 39 yards for a touchdown during the Jackets’ 31-16 victory. 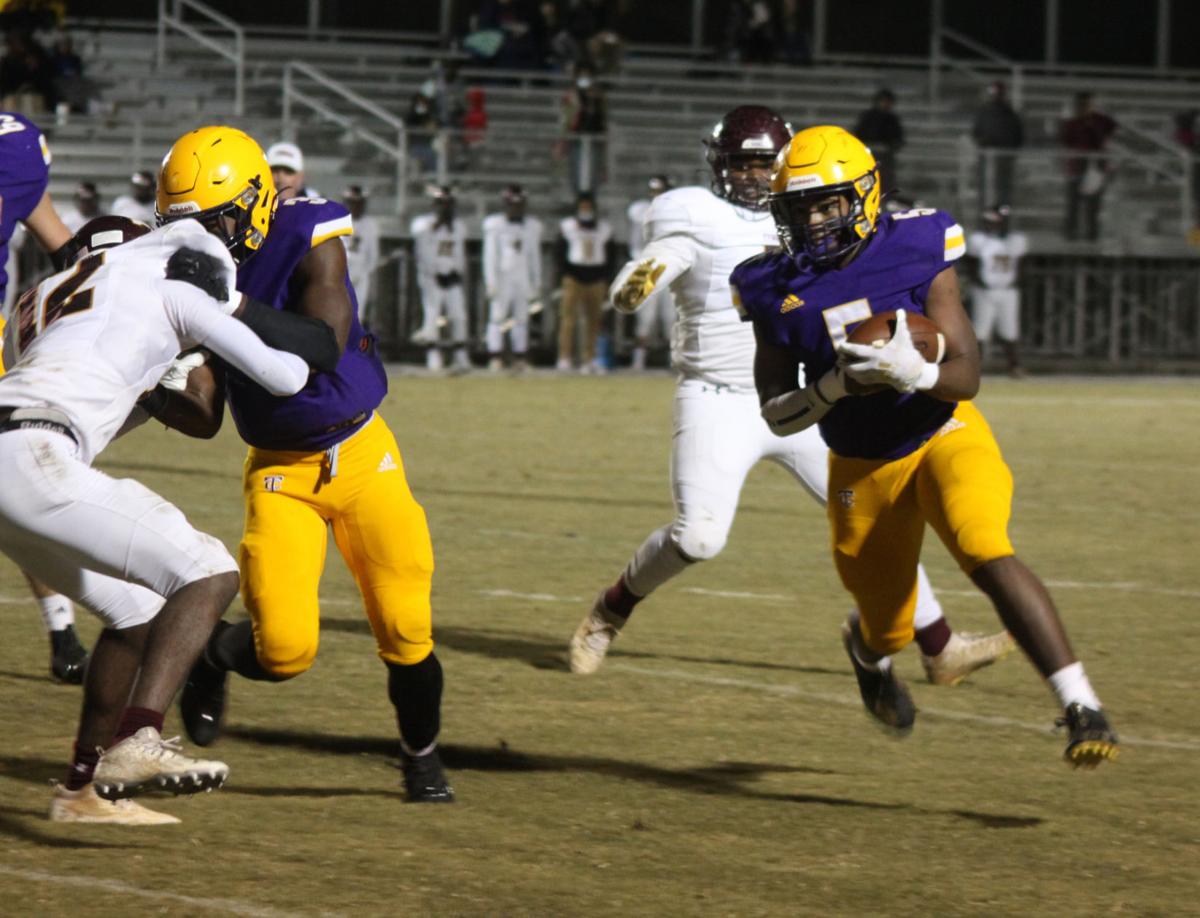 Trousdale County’s Brian Banks (5) follows the block of teammate Bryson Claiborne (3) on his way to a first-quarter touchdown run.

Trousdale County’s Xavier Harper, left, grabs a pass intended for a Tyner receiver during the first quarter Friday. Harper returned the interception 39 yards for a touchdown during the Jackets’ 31-16 victory.

Trousdale County’s Brian Banks (5) follows the block of teammate Bryson Claiborne (3) on his way to a first-quarter touchdown run.

Trousdale County jumped out to a 14-0 lead and built their advantage to 23 points en route to a 31-16 victory over Tyner Academy last Friday in the first round of the Class 2A playoffs.

It marked the fourth consecutive season that the Yellow Jackets (9-1) have eliminated the Rams (7-4) from the postseason.

“I think our players showed a lot of character this week and overcame a lot of adversity,” said TCHS coach Blake Satterfield. “I thought tonight our players had a message to prove and I was proud of my boys. I thought they did a heck of a job.”

After winning the coin toss, the Rams chose to defer to the second half and gave the Jackets the opening possession.

Trousdale County would take advantage, marching down the field in eight plays and scoring on an 8-yard run from Brian Banks around the left end. A two-point try was unsuccessful but the Jackets led 6-0 just 4:10 into the game.

On Tyner’s second play from scrimmage, the Jackets were able to extend their advantage as defensive tackle Xavier Harper showed off his athletic ability by grabbing a short pass and racing 39 yards to the end zone for a pick-six. Bryson Claiborne added a two-point run to put Hartsville’s boys ahead 14-0.

Tyner cut into the deficit late in the first quarter when Josh Jackson connected with Marcus Lewis for a 30-yard touchdown, then ran in a conversion to make it 14-8.

Early in the second quarter, Claiborne scored his 18th touchdown of the season on a 27-yard run to extend the Jackets’ lead back to 20-8.

Trousdale County would add to its advantage in the third quarter as Cole Gregory burst through the Tyner line and raced 54 yards for a touchdown. Claiborne’s two-point carry put the Jackets ahead 28-8.

“That was good. Any time a guy has knee surgery then comes back and kicks a field goal is miraculous,” Satterfield said. “It was good to see we can do that if we have to.”

Tyner would add a late touchdown on a 9-yard carry by Deonta Taylor, followed by a Jackson pass to Lewis.

Trousdale would recover an onside kick attempt and run out the clock on the victory.

Claiborne ran for a career-best 192 yards on 24 carries, putting him over 1,000 rushing yards on the season. Gregory added 94 yards on nine attempts and Banks had 11 carries for 46 yards.

On defense, the Jackets forced four turnovers with Keenan Burnley grabbing a pair of interceptions.