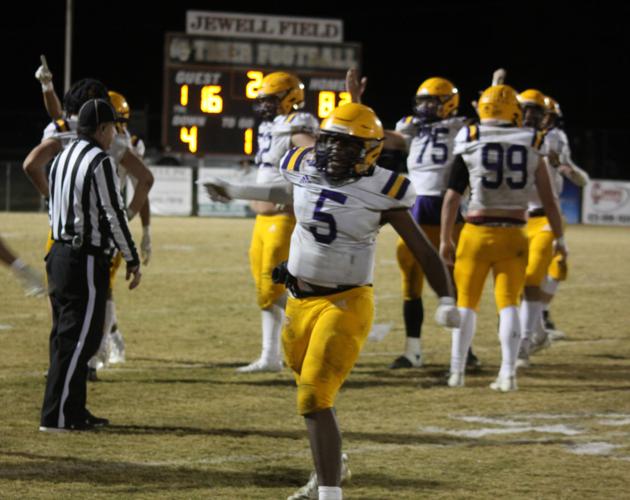 Brian Banks (5) and teammates celebrate after the Trousdale defense stopped Meigs County on fourth down late in the fourth quarter of Friday’s game. The Yellow Jackets defeated the No. 1-ranked Tigers 16-8 to reach the 2A quarterfinals. 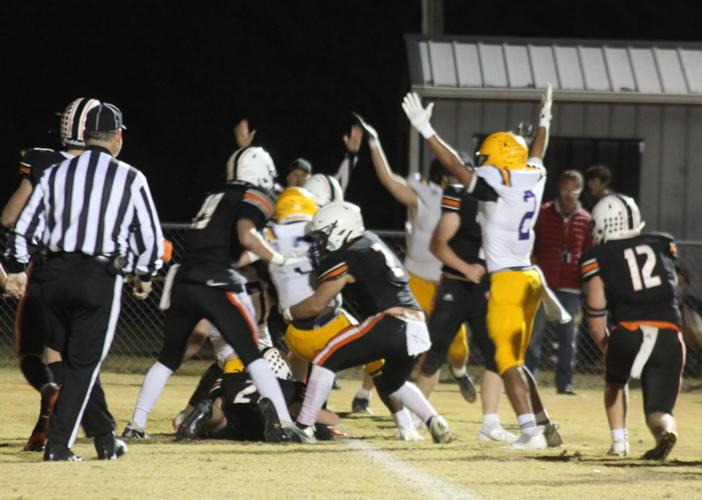 Bryson Claiborne (3) surges across the goal line for Trousdale County’s first touchdown in the third quarter of Friday’s 16-8 win over Meigs County.

Brian Banks (5) and teammates celebrate after the Trousdale defense stopped Meigs County on fourth down late in the fourth quarter of Friday’s game. The Yellow Jackets defeated the No. 1-ranked Tigers 16-8 to reach the 2A quarterfinals.

Bryson Claiborne (3) surges across the goal line for Trousdale County’s first touchdown in the third quarter of Friday’s 16-8 win over Meigs County.

Playing perhaps their most complete game of the season, Trousdale County advanced to the Class 2A quarterfinals with a 16-8 stunner of top-ranked and undefeated Meigs County on the Tigers’ home field in Decatur.

The victory marked the second year in a row that the Jackets beat an undefeated team in the second round after they ousted Bledsoe County in 2020.

“Anybody that had anything to do with the Purple & Gold tonight, this was a true team effort. You can’t say anything better about those cats wearing purple & gold tonight on that field; they sold out,” TCHS coach Blake Satterfield said. “I thought we responded well tonight. I am super proud of our kids, super proud of our coaches.”

Trousdale County’s defense kept the Jackets in the game early on, as Meigs’ first two drives ended on fourth-down stops deep in Jackets territory. Meigs’ defense was equally up to the task, keeping Trousdale’s running game in check.

In the opening minute of the second quarter, Meigs got on the scoreboard on a two-yard run from senior quarterback Logan Carroll. The play was set up by a 37-yard pass to senior Cameron Huckabey. A trick play led to a two-point conversion as tight end Da’Quawn Tatum took a handoff and threw to Logan Purgason to put the Tigers ahead 8-0.

“Their quarterback is tough,” Satterfield said. “We watched the 2019 Trousdale-Meigs game and the 2020 game. Tonight we played like the 2019 version. That’s what good football programs do.”

Trousdale County would tie the game on the opening drive of the second half as Bryson Claiborne ran 52 yards down the home sideline to put the Jackets in scoring position. Five plays later, Claiborne would muscle across the goal line on fourth-and-3. Quarterback Keenan Burnley added a two-point run to make it 8-8.

“It was one step forward, two steps back (in the first half),” Satterfield said. “We just had to eliminate the penalties and mistakes.”

The Jackets’ defense stepped up big in the second half, keeping Meigs’ offense in check. Early in the fourth quarter, Carroll tried to find Huckabey but overthrew him and the pass was intercepted by Burnley at the TC 20.

Trousdale would go on a nine-play, 80-yard drive to take the lead as fullback Cole Gregory scored on a 3-yard carry. A 36-yard run from Kane Burnley helped ignite the drive, which was capped by a two-point run from Claiborne to make it 16-8 with 4:01 remaining.

Meigs County would drive to the Trousdale 39 before turning the ball over on downs with 2:17 to play. The Jackets gained one first down before giving Meigs one last shot from its 44 with just 40 seconds to play.

On first down, defensive tackle Xavier Harper sacked Carroll for a 16-yard loss and three straight incompletions allowed Trousdale to go into the “Victory Formation.”

Trousdale County raised its record to 10-1 on the season, while Meigs finished its season at 10-1. For Meigs’ seniors, it was their first-ever home defeat.

Claiborne finished with 20 carries for 130 yards, while Kane Burnley had 39 yards on three carries and Keenan Burnley 36 yards on nine attempts.

Trousdale County will travel to Watertown on Friday for a spot in the semifinals against either Oneida or Hampton.

“We’ve got another rock in the road next week. We’ve got to take care of business,” Satterfield said.

A Community Pep Rally will be held Thursday, Nov. 18 at 6:30 p.m. at the football field in preparation for Friday's quarterfinal at Watertown. Organizers want all Yellow Jacket supporters to come out and cheer on the team.