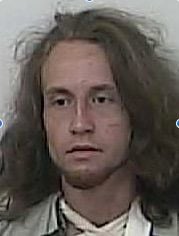 A Westmoreland man is now it 0-for-2 in attempts to evade Trousdale County law enforcement after a pair of arrests in the last week.

Joshua Adam Brewster, 28, escaped from the Trousdale County Jail on Monday just after 1 p.m. but was quickly recaptured. Brewster allegedly hijacked a car and fled up Broadway while being pursued by police. He was finally apprehended just north of the intersection with Halltown Road by Chief Deputy Wayland Cothron, with assistance from the Tennessee Highway Patrol.

Sheriff Ray Russell told The Vidette that Brewster had been taken to the Justice Center for a shower, in accordance with regulations related to COVID-19. After showering, Brewster reportedly took off out the building.

A corrections officer gave pursuit on foot but suffered a leg injury. Trousdale County EMS transported the officer, who was not identified, to Sumner Regional Medical Center for treatment. Russell later said the injury was not serious.

After stealing the car Brewster allegedly hit DTF Agent Brandon Gooch’s car with the vehicle, according to Russell, but Gooch was unharmed.

On Wednesday, June 17, Brewster was apprehended at the Marathon gas station on Highway 231S after allegedly trying to flee a traffic stop. According to the arrest affidavit, spike strips were deployed and Brewster was eventually taken into custody.

Russell said Brewster would face a number of additional charges related to Monday’s escape attempt. A list of those charges was not available at press time.

Trousdale County dispatch sent an emergency notification to nearby residents to warn them.

He was captured after a brief foot pursuit the following morning on Boat Dock Road.

Kuykendall was booked into the Trousdale County Jail and charged with simple possession/casual exchange, evading arrest on foot, failure to give immediate notice of accident, leaving scene of accident-damage, drivers license revoke/suspend/canceled and evading arrest by motor vehicle. He was released on $25,000 bond but was rearrested on June 18. He remained in jail at press time.