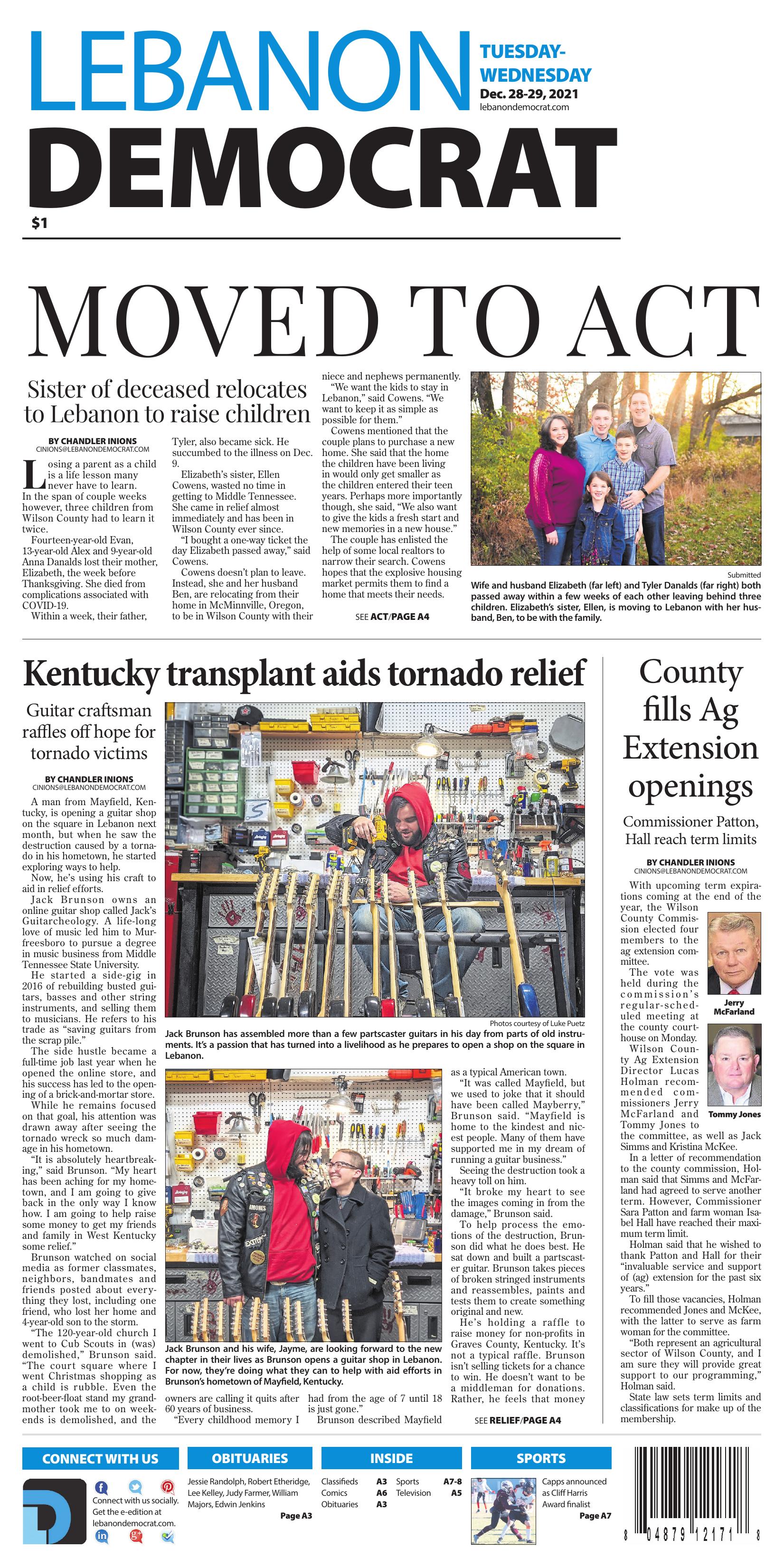 Wife and husband Elizabeth (far left) and Tyler Danalds (far right) both passed away within a few weeks of each other leaving behind three children. Elizabeth’s sister, Ellen, is moving to Lebanon with her husband, Ben, to be with the family.

Losing a parent as a child is a life lesson many never have to learn. In the span of couple weeks however, three children from Wilson County had to learn it twice.

Fourteen-year-old Evan, 13-year-old Alex and 9-year-old Anna Danalds lost their mother, Elizabeth, the week before Thanksgiving. She died from complications associated with COVID-19.

Within a week, their father, Tyler, also became sick. He succumbed to the illness on Dec. 9.

Elizabeth’s sister, Ellen Cowens, wasted no time in getting to Middle Tennessee. She came in relief almost immediately and has been in Wilson County ever since.

“I bought a one-way ticket the day Elizabeth passed away,” said Cowens.

Cowens doesn’t plan to leave. Instead, she and her husband Ben, are relocating from their home in McMinnville, Oregon, to be in Wilson County with their niece and nephews permanently.

“We want the kids to stay in Lebanon,” said Cowens. “We want to keep it as simple as possible for them.”

Cowens mentioned that the couple plans to purchase a new home. She said that the home the children have been living in would only get smaller as the children entered their teen years. Perhaps more importantly though, she said, “We also want to give the kids a fresh start and new memories in a new house.”

The couple has enlisted the help of some local realtors to narrow their search. Cowens hopes that the explosive housing market permits them to find a home that meets their needs. Thanks to a GoFundMe page organized by a parent from Lebanon’s Friendship Christian School, where the children attended, the couple will have a head start on a down payment.

Originally, the page requested donations with a goal of $15,000. However, donations quickly blew past that number. On Dec. 27, the page had raised more than $100,000. Amounts of those donations have varied, with more than 900 individual contributions to the goal. One anonymous donor even gave $5,000.

The page remains active at www.gofundme.com/f/danalds-family.

Cowens said that for the children, she wants to keep the transition as seamless as she can. She plans to keep them enrolled at FCS and to remain congregants at the Bridge Fellowship.

The Danalds were devout followers of Jesus Christ and His teachings. Their dedication to the church and the Lord is a legacy that they will leave behind. But, Danalds’ sister, said that zeal didn’t stop after the service was over.

“What resonates the most about her was her passion for serving others,” said Cowens. “She wanted to do as much for others as she could.”

Danalds had a particular passion for helping out with special-needs programs, like the Empower Me Center in Lebanon. Her obituary described Danalds as, “a dedicated wife and mother, Christ-centered servant toward others and tireless advocate for children and special-needs causes.”

Cowens mentioned that her sister became involved with the Empower Me Center when she had a special-needs child herself.

Danalds is also remembered for a natural ability to dance. Ballet was a consistent presence in her childhood. She often danced in Ballet Memphis’ annual production of “The Nutcracker.”

She met her husband at Drury College in Springfield, Missouri, where she was an active servant member of Logos, which is a Christian, interdenominational campus ministry. She earned a bachelor’s of arts degree in sociology.

The couple stayed in southwest Missouri after graduation and were married on April 25, 2003. Four years later, Evan was born.

Eventually settling in Mt. Juliet, Danalds became an-involved parent, serving within the children’s schools. She participated in numerous church and school roles, as well as community events and activities for her children. That care and compassion left its mark wherever they went.

One of Tyler Danalds’ co-workers, Christina Cunningham, called the couple the “kindest most sincere people (she has) ever met.”

“They both were hard working and truly served God, their community, as well as anyone who needed anything,” Cunningham said.

The Danalds’ final request was for people to send donations to the Empower Me Center in lieu of flowers.

Jack Brunson has assembled more than a few partscaster guitars in his day from parts of old instruments. It’s a passion that has turned into a livelihood as he prepares to open a shop on the square in Lebanon.

The partscaster guitar that Jack Brunson crafted from used parts of old guitars is the centerpiece of a raffle he’s holding to raise money for the tornado victims in Mayfield, Kentucky.

Jack Brunson and his wife, Jayme, are looking forward to the new chapter in their lives as Brunson opens a guitar shop in Lebanon. For now, they’re doing what they can to help with aid efforts in Brunson’s hometown of Mayfield, Kentucky.

A man from Mayfield, Kentucky, is opening a guitar shop on the square in Lebanon next month, but when he saw the destruction caused by a tornado in his hometown, he started exploring ways to help.

Now, he’s using his craft to aid in relief efforts.

He started a side-gig in 2016 of rebuilding busted guitars, basses and other string instruments, and selling them to musicians. He refers to his trade as “saving guitars from the scrap pile.”

The side hustle became a full-time job last year when he opened the online store, and his success has led to the opening of a brick-and-mortar store.

While he remains focused on that goal, his attention was drawn away after seeing the tornado wreck so much damage in his hometown.

“It is absolutely heartbreaking,” said Brunson. “My heart has been aching for my hometown, and I am going to give back in the only way I know how. I am going to help raise some money to get my friends and family in West Kentucky some relief.”

Brunson watched on social media as former classmates, neighbors, bandmates and friends posted about everything they lost, including one friend, who lost her home and 4-year-old son to the storm.

“The 120-year-old church I went to Cub Scouts in (was) demolished,” Brunson said. “The court square where I went Christmas shopping as a child is rubble. Even the root-beer-float stand my grandmother took me to on weekends is demolished, and the owners are calling it quits after 60 years of business.

“Every childhood memory I had from the age of 7 until 18 is just gone.”

“It was called Mayfield, but we used to joke that it should have been called Mayberry,” Brunson said. “Mayfield is home to the kindest and nicest people. Many of them have supported me in my dream of running a guitar business.”

Seeing the destruction took a heavy toll on him.

“It broke my heart to see the images coming in from the damage,” Brunson said.

To help process the emotions of the destruction, Brunson did what he does best. He sat down and built a partscaster guitar. Brunson takes pieces of broken stringed instruments and reassembles, paints and tests them to create something original and new.

He’s holding a raffle to raise money for non-profits in Graves County, Kentucky. It’s not a typical raffle. Brunson isn’t selling tickets for a chance to win. He doesn’t want to be a middleman for donations. Rather, he feels that money would be best put into the hands of organizations with boots on the ground. So, he’s going a different route.

Brunson said that there are three qualifications for people being able to enter. First, one can screenshot a donation to a GoFundMe or Graves County United Way.

“Any donation gets you an entry,” said Brunson. “So, everyone can give regardless of budget.”

Secondly, if an individual traveled to the area or lives in Mayfield, they can send some tangible proof of helping out.

If none of those qualifications apply, the last option is to write a 500-word letter about mutual aid they have done.

Brunson commented that he would like to see donations sent to “any crowd-funding set up for (his) middle-school classmate, Huda Alubahi, who lost her home and young son.”

The guitarThe raffle prize is an original S-style body, reliced and assembled by Brunson. The body is paulownia, so the guitar weighs approximately 6 pounds. It has a maple neck with an oil finish, for a real wood feel, and MOP blocks, and post-lawsuit 1980s MIK pickups and electronics.

More importantly to the guitar maker, it is red and black, the colors of Mayfield High School.

Recreating classic guitars really took off for Brunson during the pandemic.

This created a perfect storm, an explosion of time, and people who wanted to buy his guitars.

He and his wife, Jayme, were going to get some ice cream in Lebanon when they saw the for-rent sign on the square. The couple, who both originate from small hometowns, felt that Murfreesboro was getting too big.

“Here in Lebanon it feels more like Mayfield where I grew up,” Brunson said.

Hopefully, that connection helps as he deals with the devastation that hit so close to his home.

“The thing I’ve been reckoning with the most is that the town of my memory no longer exists,” Brunson said.

He’s grateful that one Facebook friend took an overhead shot and, in plain text, wrote out where everything was.

The memories will never equate to what was lost.

“I can’t think of one single person that hasn’t posted an in-memoriam,” said Brunson. “Everyone knows someone who was gravely injured or killed.”

The guitar owner knows that aid can only relieve the pain, it can’t erase it. However, Brunson is happy to be able to at least help out in some way.

With upcoming term expirations coming at the end of the year, the Wilson County Commission elected four members to the ag extension committee.

The vote was held during the commission’s regular-scheduled meeting at the county courthouse on Monday.

In a letter of recommendation to the county commission, Holman said that Simms and McFarland had agreed to serve another term. However, Commissioner Sara Patton and farm woman Isabel Hall have reached their maximum term limit.

Holman said that he wished to thank Patton and Hall for their “invaluable service and support of (ag) extension for the past six years.”

To fill those vacancies, Holman recommended Jones and McKee, with the latter to serve as farm woman for the committee.

“Both represent an agricultural sector of Wilson County, and I am sure they will provide great support to our programming,” Holman said.

State law sets term limits and classifications for make up of the membership. 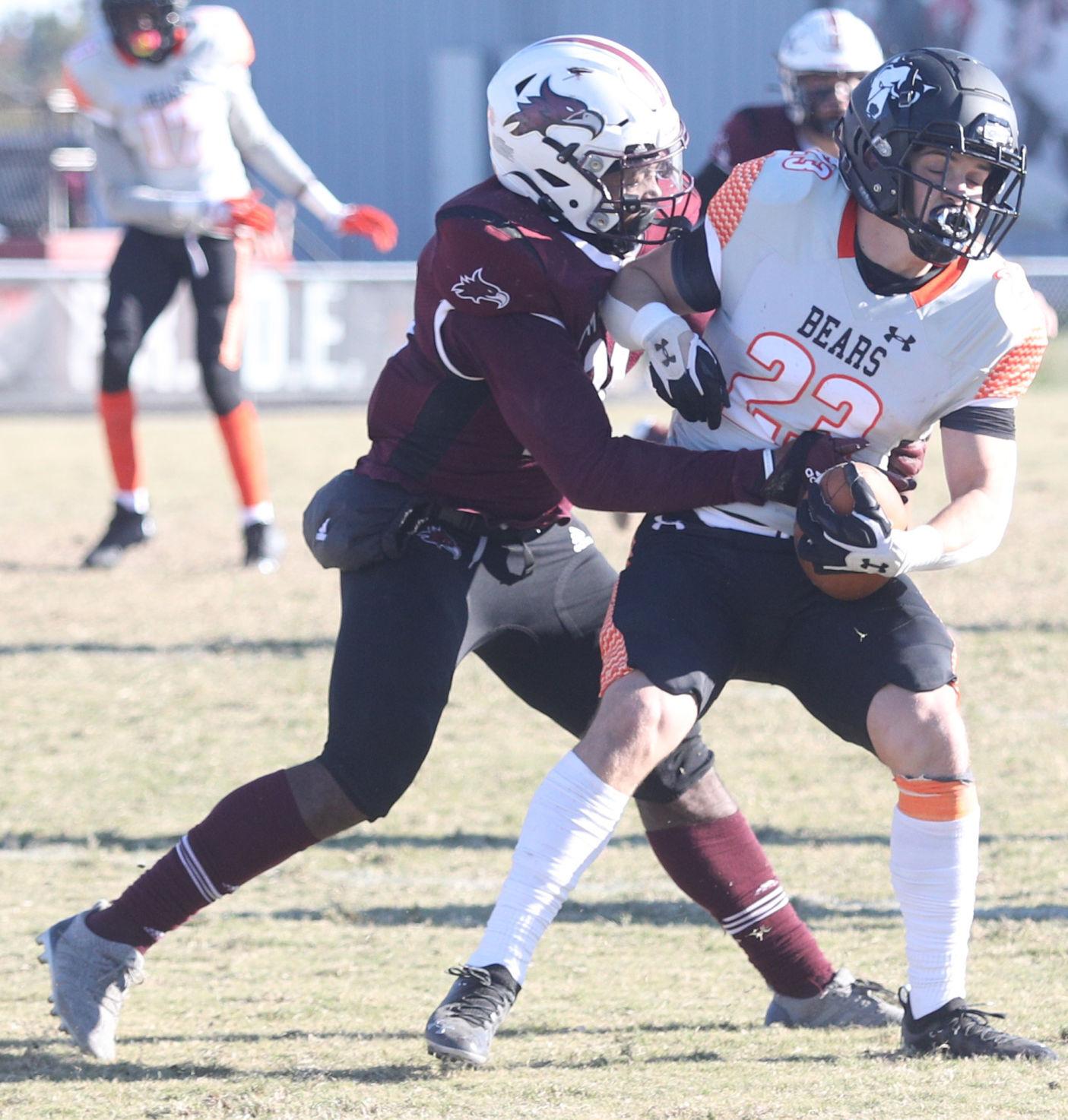