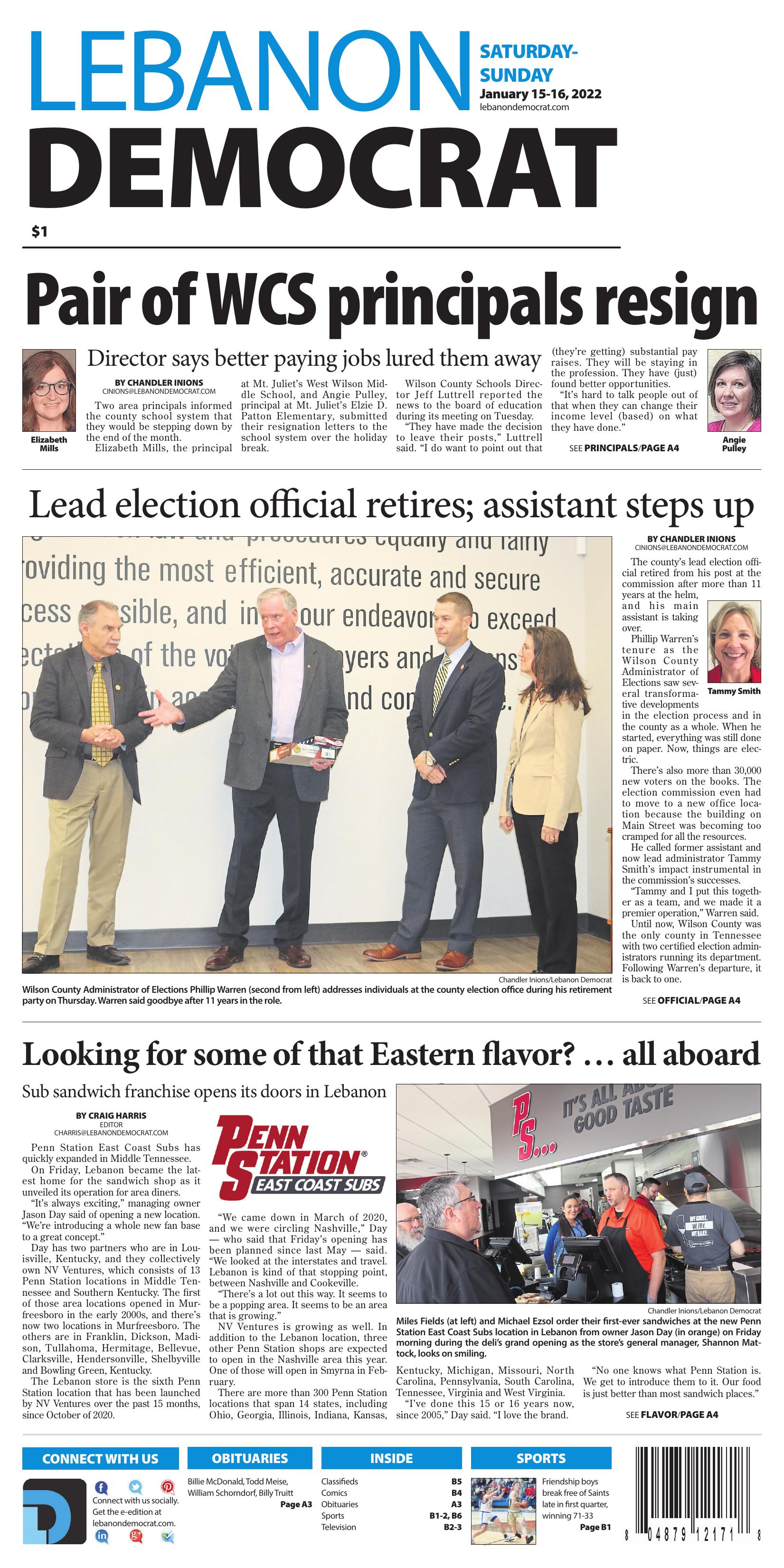 Two area principals informed the county school system that they would be stepping down by the end of the month.

Wilson County Schools Director Jeff Luttrell reported the news to the board of education during its meeting on Tuesday.

“They have made the decision to leave their posts,” Luttrell said. “I do want to point out that (they’re getting) substantial pay raises. They will be staying in the profession. They have (just) found better opportunities.

“It’s hard to talk people out of that when they can change their income level (based) on what they have done.”

As Luttrell explained, that move is predicated upon performance, and it is likely to continue.

“We are starting to have curriculum companies, other schools come into Wilson County and look at our people,” Luttrell said. “That is because of (academic) results we have been getting in recent years.”

During the meeting, Luttrell informed the board that the positions had been posted and that the school system would be looking to “fill those positions as soon as possible.”

WCS Public Information Officer Bart Barker confirmed that the letters were submitted with a 30-day notice, so those positions will be officially available later this month and in the early days of February.

Mills has been the principal at West Wilson Middle School since 2020, but she previously served as an assistant principal there. She’s since steered the school throughout the temporary off-site existence that took place after the tornado in March of 2020.

She taught at both the elementary and middle-school levels and served as an assistant principal for three years. She’d been Patton’s principal since 2020.

Luttrell did not say specifically where each educator was moving to.

During Phillip Warren’s tenure as administrator at the Wilson County Election Commission, the county grew substantially, gaining nearly 30,000 new voters. The commission also held a primary election on a day a tornado closed two polling places and knocked out power at 10 others. Warren said that the commission got to try all the disaster scenarios it trained all at one time on that day.

Retiring Wilson County Administrator of Elections Phillip Warren said that he enjoyed getting out in his Uncle Sam costume to spread awareness and raise education about what his commission does for the county.

Wilson County Administrator of Elections Phillip Warren (second from left) addresses individuals at the county election office during his retirement party on Thursday. Warren said goodbye after 11 years in the role.

The county’s lead election official retired from his post at the commission after more than 11 years at the helm, and his main assistant is taking over.

Phillip Warren’s tenure as the Wilson County Administrator of Elections saw several transformative developments in the election process and in the county as a whole. When he started, everything was still done on paper. Now, things are electric.

There’s also more than 30,000 new voters on the books. The election commission even had to move to a new office location because the building on Main Street was becoming too cramped for all the resources.

“Tammy and I put this together as a team, and we made it a premier operation,” Warren said.

Until now, Wilson County was the only county in Tennessee with two certified election administrators running its department. Following Warren’s departure, it is back to one.

Smith had previously served in a similar role for Macon County, where she was certified, before moving to Wilson County 10 years ago.

“We have come a long way (since then),” said Smith. “When we started, they were still using typewriters.”

The new administrator said that she wants to really ramp up the election institute that her commission offers. It spotlights what goes on behind the scenes in the year leading up to an election.

“It allows individuals to come in and see exactly what we do,” Smith said. “We only have one opportunity to get things right, so educating voters about how it works is important.”

To commemorate the outgoing administrator’s tenure, several of the people who have been elected under his watch gathered to say goodbye.

Rep. Susan Lynn, of Mt. Juliet, said, “We are so thankful you have been taking care of our elections … and for so long.”

“Among election administrators, (Warren is) a leader,” said Boyd. “I know other administrators who come up to the Capitol, and the Speaker of the House (Rep. Cameron Sexton) tells them to go talk to Phillip or Tammy.”

In Warren’s 11 years at the election commission, he said no day could compare with the primary election day on March 3, 2020, when Wilson County was struck by a tornado.

“Every disaster scenario that we came up with, we got to try them all in one day.”

The response from the commission’s workforce that day still fills Warren with pride.

“It goes to show with the preparation that had been put into place, and with the training of our poll workers, when you do have a catastrophe like that, you have the people who can handle it,” Warren said. “We had as many voters that day as we did (during the) early election period.”

Ronald Young has volunteered at the polls in District 18 for 25 years, and he has seen his fair share of changes.

“Back then, the real requirement was, ‘Did you own a pick-up truck,’ ” Young said.

The machines weighed approximately 70 pounds and had to be transported across the county on Election Day and brought back to Lebanon after the polls closed.

That’s not the only difference that Young pointed out.

“In older days, the training was once or twice (a year),” Young said. “Whereas, with Phillip, the training is more elaborate. It’s hands on with a new machine, and it meets four times a year.”

However, that training has come in handy for Young, who said he’s qualified for any job needed at the polls.

“Phillip and Tammy have organized this in such a way that not only am I a machine operator primarily, but I can do any job,” Young said. “Registrar, special elections ... they’ve trained me on any job we have to do, so if we’re short on any position at the poll, I can step into that role with ease.”

“Tammy is so well qualified,” Young said. “I have a lot of respect for her. I can email her, even in the middle of the night, and she always answers. She works harder than any of us.”

Warren is also confident in Smith’s future at the helm.

“The procedures, the planning, the anticipation of the event, the training of poll workers are what I consider our greatest achievements,” Warren said. “And Tammy will be able to take it to even greater heights.”

As for Warren, he wasn’t specific about what the next chapter holds for him, but he plans to be busy.

“I have many many projects, and lots of plans,” Warren said.

Miles Fields (at left) and Michael Ezsol order their first-ever sandwiches at the new Penn Station East Coast Subs location in Lebanon from owner Jason Day (in orange) on Friday morning during the deli’s grand opening as the store’s general manager, Shannon Mattock, looks on smiling.

Raymond Guillermo prepares servings of protein for the sandwiches at Penn Station East Coast Subs before sending the ingredients over to Jesse Ross on the flat-top grill.

The Philadelphia cheesesteak is one of the most popular options at Penn Station East Coast Subs.

On Friday, Lebanon became the latest home for the sandwich shop as it unveiled its operation for area diners.

Day has two partners who are in Louisville, Kentucky, and they collectively own NV Ventures, which consists of 13 Penn Station locations in Middle Tennessee and Southern Kentucky. The first of those area locations opened in Murfreesboro in the early 2000s, and there’s now two locations in Murfreesboro. The others are in Franklin, Dickson, Madison, Tullahoma, Hermitage, Bellevue, Clarksville, Hendersonville, Shelbyville and Bowling Green, Kentucky.

The Lebanon store is the sixth Penn Station location that has been launched by NV Ventures over the past 15 months, since October of 2020.

“We came down in March of 2020, and we were circling Nashville,” Day — who said that Friday’s opening has been planned since last May — said. “We looked at the interstates and travel. Lebanon is kind of that stopping point, between Nashville and Cookeville.

NV Ventures is growing as well. In addition to the Lebanon location, three other Penn Station shops are expected to open in the Nashville area this year. One of those will open in Smyrna in February.

“No one knows what Penn Station is. We get to introduce them to it. Our food is just better than most sandwich places.”

Penn Station — which was founded in Cincinnati in 1985 — serves hot and cold deli sandwiches, including what Day says stands out in the Philadelphia cheesesteak sandwich. It also has wraps and salads that are made to order, in addition to fresh-cut fries, hand-squeezed lemonade and chocolate-chunk cookies that are baked daily.

On Thursday, the restaurant — which is located at 348 South Cumberland St. (across from Whitt’s Barbecue) — invited first responders in for lunch as a final tune-up for Friday’s opening.

“We are excited to bring Penn Station to Lebanon,” Day said. “We’re growing quickly in Middle Tennessee, and Lebanon is a great market for Penn Station. We think our hot and cold sandwiches, fresh-cut fries and fresh-squeezed lemonade will stand out from the competition.” 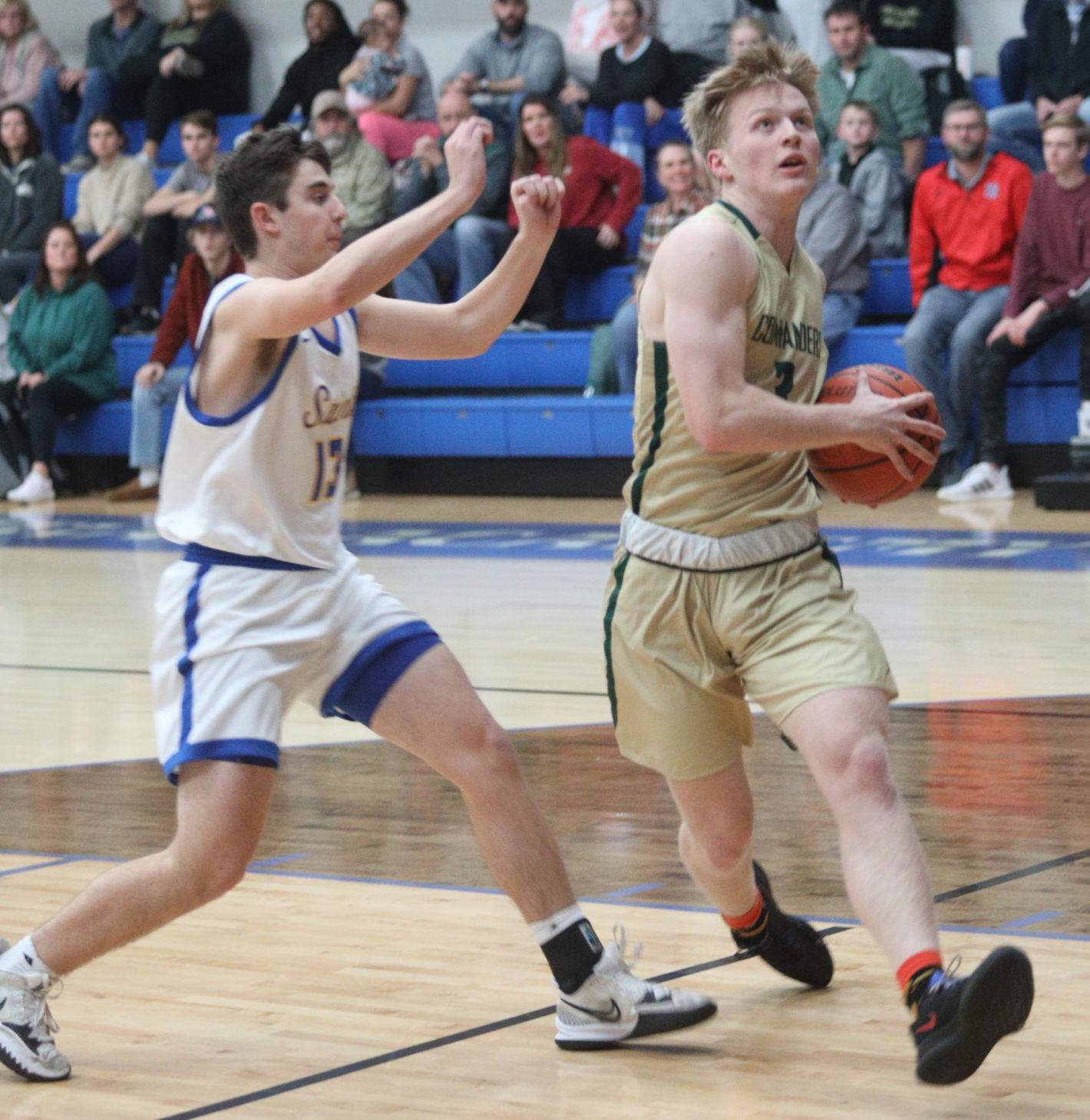