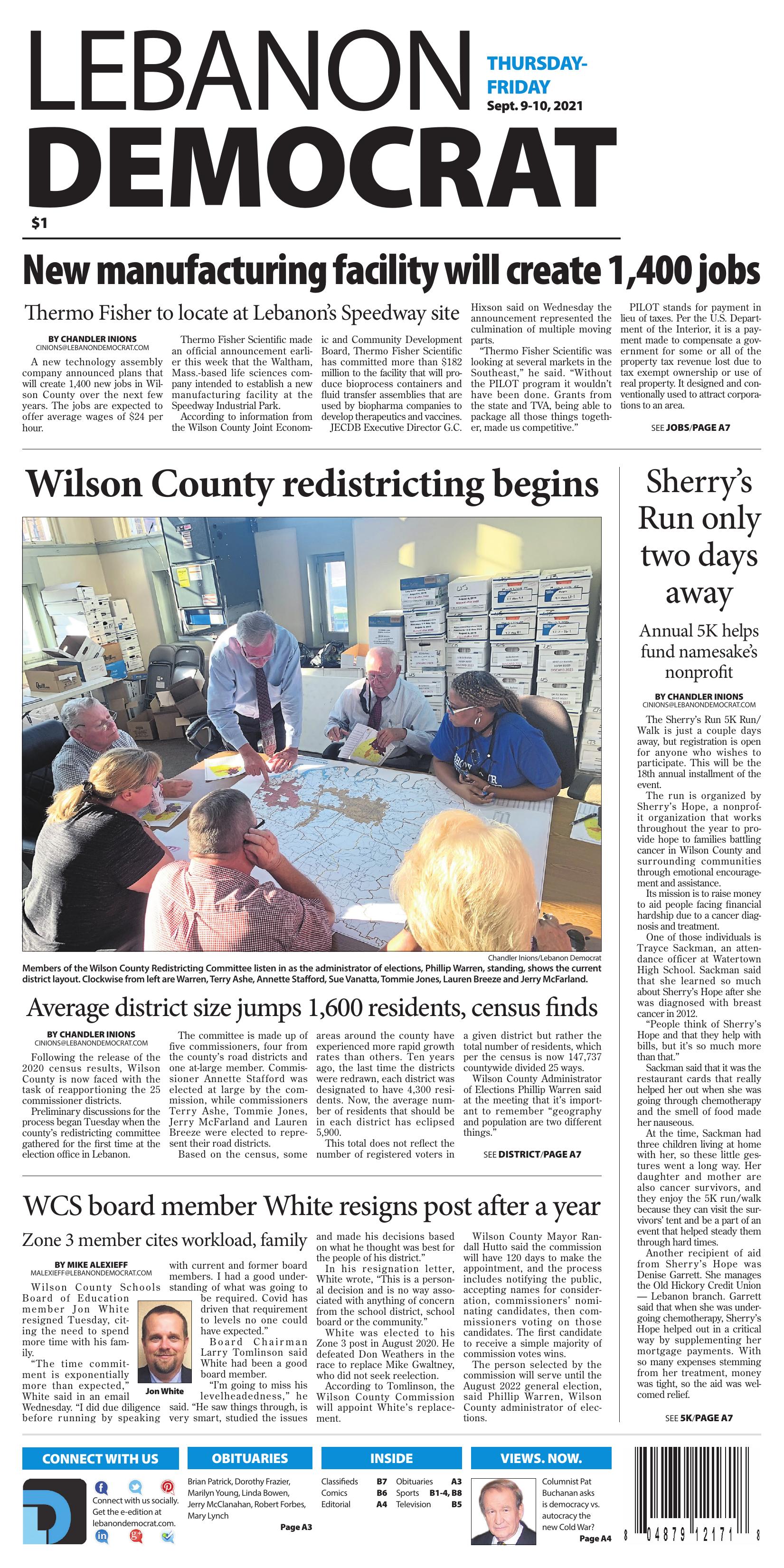 A new technology assembly company announced plans that will create 1,400 new jobs in Wilson County over the next few years. The jobs are expected to offer average wages of $24 per hour.

Thermo Fisher Scientific made an official announcement earlier this week that the Waltham, Mass.-based life sciences company intended to establish a new manufacturing facility at the Speedway Industrial Park.

According to information from the Wilson County Joint Economic and Community Development Board, Thermo Fisher Scientific has committed more than $182 million to the facility that will produce bioprocess containers and fluid transfer assemblies that are used by biopharma companies to develop therapeutics and vaccines.

“Thermo Fisher Scientific was looking at several markets in the Southeast,” he said. “Without the PILOT program it wouldn’t have been done. Grants from the state and TVA, being able to package all those things together, made us competitive.”

PILOT stands for payment in lieu of taxes. Per the U.S. Department of the Interior, it is a payment made to compensate a government for some or all of the property tax revenue lost due to tax exempt ownership or use of real property. It designed and conventionally used to attract corporations to an area.

While the 1,400 jobs totals reflect ultimate goals, the company is expected to hire 400 employees in the near-term. If everything goes according to plan, in a few years the remaining jobs will be created over the next few years.

In the time since Thermo Fisher originally explored the prospect of moving to Wilson County, the project has expanded from a purely distributive logistic center to a manufacturing facility. Hixson said Thermo Fisher opted for the increased investment after the company saw what Middle Tennessee had to offer.

Hixson pointed to proximity to major population centers as a major reason for the purchase. Within 45 minutes you can be in Nashville, or Murfreesboro, Gallatin or Cookeville.

According to Lagarde, these jobs will require a varied workforce as such roles include manufacturing, assembling and packaging bioprocess containers in a clean-room environment. There will be other positions available in engineering, procurement, quality, warehousing and site leadership.

Lagarde also mentioned in the official press release that the company “looks forward to being part of the community and enabling the local talent to build meaningful careers through the high-quality jobs that will be created at the site.”

Wilson County is quickly emerging as a desirable place to set up shop. According to TNECD, over the last five years, the department has supported 13 economic development projects in the county, resulting in roughly 3,300 job commitments and nearly $785 million in capital investment.

Wilson County Mayor Randall Hutto expressed delight over the announcement, and sees a lot of opportunity emerging through the partnership and hopes it will provide, “a clearer pathway to meeting present and unforeseen challenges in the medical and healthcare sector.”

“I always believe the quality of people who live in our county is a huge attraction for companies to locate here,” Hutto said Wednesday. “The location is important as well as how everyone works together to help companies relocate here.”

Hutto and Hixson agree that Thermo Fisher’s new facility represents promise on the horizon. Hixson said it’s the biggest investment to date at Speedway Industrial Park, and having a developer with a building that met Thermo Fisher’s requirements, which was also for sale and not for rent, really netted the deal.

“Wilson County is excited to contribute again to Tennessee’s No. 1 ranking in the Southeast for medical equipment and supplies,” Hutto said.

The project is the latest in a string of life sciences-related companies to locate or expand in Tennessee. Since 2019, health care, life sciences and medical device companies have invested nearly $430 million in the state.

Following the release of the 2020 census results, Wilson County is now faced with the task of reapportioning the 25 commissioner districts.

Preliminary discussions for the process began Tuesday when the county’s redistricting committee gathered for the first time at the election office in Lebanon.

The committee is made up of five commissioners, four from the county’s road districts and one at-large member. Commissioner Annette Stafford was elected at large by the commission, while commissioners Terry Ashe, Tommie Jones, Jerry McFarland and Lauren Breeze were elected to represent their road districts.

Based on the census, some areas around the county have experienced more rapid growth rates than others. Ten years ago, the last time the districts were redrawn, each district was designated to have 4,300 residents. Now, the average number of residents that should be in each district has eclipsed 5,900.

This total does not reflect the number of registered voters in a given district but rather the total number of residents, which per the census is now 147,737 countywide divided 25 ways.

Wilson County Administrator of Elections Phillip Warren said at the meeting that it’s important to remember “geography and population are two different things.”

Thanks to advances in technology, the redistricting process will be assisted by geo-coded software. “It’s been a big plus for the process since being enacted,” Warren said.

Over the last decade, some of the districts’ populations have ballooned to a point of significant deviations. For instance, District 11 saw the greatest jump in population. District 11 comprises the Providence area of Mt. Juliet. It’s total population now numbers nearly 10,000 residents, while other districts like District 1 remained relatively stagnant. Its total population of 4,412 residents reflects a negative deviation of 25% from the new average.

Per Tennessee law, county legislative bodies are required to redistrict their county by Jan. 1, 2022. During the next couple months the redistricting committee in collaboration with the Wilson County Election Commission will work to delineate these districts in a manner that proportionally reshapes each one to meet the new number.

Warren said that the goal is to get the largest district and the smallest district within a 10% deviation. By taking the total residents in a drawn district as a% of the average, the committee will derive the deviations. As an example, District 4 has 7,163 residents currently. Since the average resident population is supposed to be 5,900, this represents a positive deviation of 21%.

When it comes to drawing new lines, McFarland said at the meeting that “the more we stick to roads and geographic regions the easier it is for the average person.”

Warren agreed with this sentiment, but added, “It’s kind of like rain. It has to stop somewhere.”

Ashe, who was elected redistricting chairman by fellow committee members, said the utmost priority is to be fair. He added that he recognizes the importance of hearing each commissioner out, but coincidentally, the futility of trying to answer questions from each commissioner all at once.

“We have a committee process. We need to stay inside of that process,” he said.

Between now and Tuesday, when the committee meets again, this time in the Commission Courtroom at the Wilson County Courthouse at 5 p.m., Warren and his staff at the Election Commission will work on a preliminary outlay that gets the districts more in line with where they need to be.

Following input from the committee, it will then present the initial draft to the County Commission at the regular scheduled Sept. 20 meeting, which will also be at the courthouse, starting at 7 p.m.

“The time commitment is exponentially more than expected,” White said in an email Wednesday. “I did due diligence before running by speaking with current and former board members. I had a good understanding of what was going to be required. Covid has driven that requirement to levels no one could have expected.”

Board Chairman Larry Tomlinson said White had been a good board member.

“I’m going to miss his levelheadedness,” he said. “He saw things through, is very smart, studied the issues and made his decisions based on what he thought was best for the people of his district.”

In his resignation letter, White wrote, “This is a personal decision and is no way associated with anything of concern from the school district, school board or the community.”

White was elected to his Zone 3 post in August 2020. He defeated Don Weathers in the race to replace Mike Gwaltney, who did not seek reelection.

According to Tomlinson, the Wilson County Commission will appoint White’s replacement.

Wilson County Mayor Randall Hutto said the commission will have 120 days to make the appointment, and the process includes notifying the public, accepting names for consideration, commissioners’ nominating candidates, then commissioners voting on those candidates. The first candidate to receive a simple majority of commission votes wins.

The person selected by the commission will serve until the August 2022 general election, said Phillip Warren, Wilson County administrator of elections.

The Sherry’s Run 5K Run/Walk is just a couple days away, but registration is open for anyone who wishes to participate. This will be the 18th annual installment of the event.

The run is organized by Sherry’s Hope, a nonprofit organization that works throughout the year to provide hope to families battling cancer in Wilson County and surrounding communities through emotional encouragement and assistance.

Its mission is to raise money to aid people facing financial hardship due to a cancer diagnosis and treatment.

One of those individuals is Trayce Sackman, an attendance officer at Watertown High School. Sackman said that she learned so much about Sherry’s Hope after she was diagnosed with breast cancer in 2012.

“People think of Sherry’s Hope and that they help with bills, but it’s so much more than that.”

Sackman said that it was the restaurant cards that really helped her out when she was going through chemotherapy and the smell of food made her nauseous.

At the time, Sackman had three children living at home with her, so these little gestures went a long way. Her daughter and mother are also cancer survivors, and they enjoy the 5K run/walk because they can visit the survivors’ tent and be a part of an event that helped steady them through hard times.

Another recipient of aid from Sherry’s Hope was Denise Garrett. She manages the Old Hickory Credit Union — Lebanon branch. Garrett said that when she was undergoing chemotherapy, Sherry’s Hope helped out in a critical way by supplementing her mortgage payments. With so many expenses stemming from her treatment, money was tight, so the aid was welcomed relief.

According to Garrett, the organization hardly just sent a check though. “Everybody up there was so nice. They called and checked on me and it made my breast cancer journey much easier with the outpouring of love from them.”

Garrett said that even now they still call and check in.

Registration for the event is available online at www.sherrysrun.org and at the Sherry’s Hope office at 110 Babb Drive, Lebanon.

Following the run, awards will be presented to top finishing runners and team awards will be given out. Always a very special part of the day, the ‘In Memory of’ and ‘In Honor of’ recipients will be recognized. This year, the event is in memory of Al Ashworth, Cathy Carey and Wendi Welch Warren. The Sherry’s Run 5K is in honor of Gabby Aulds.