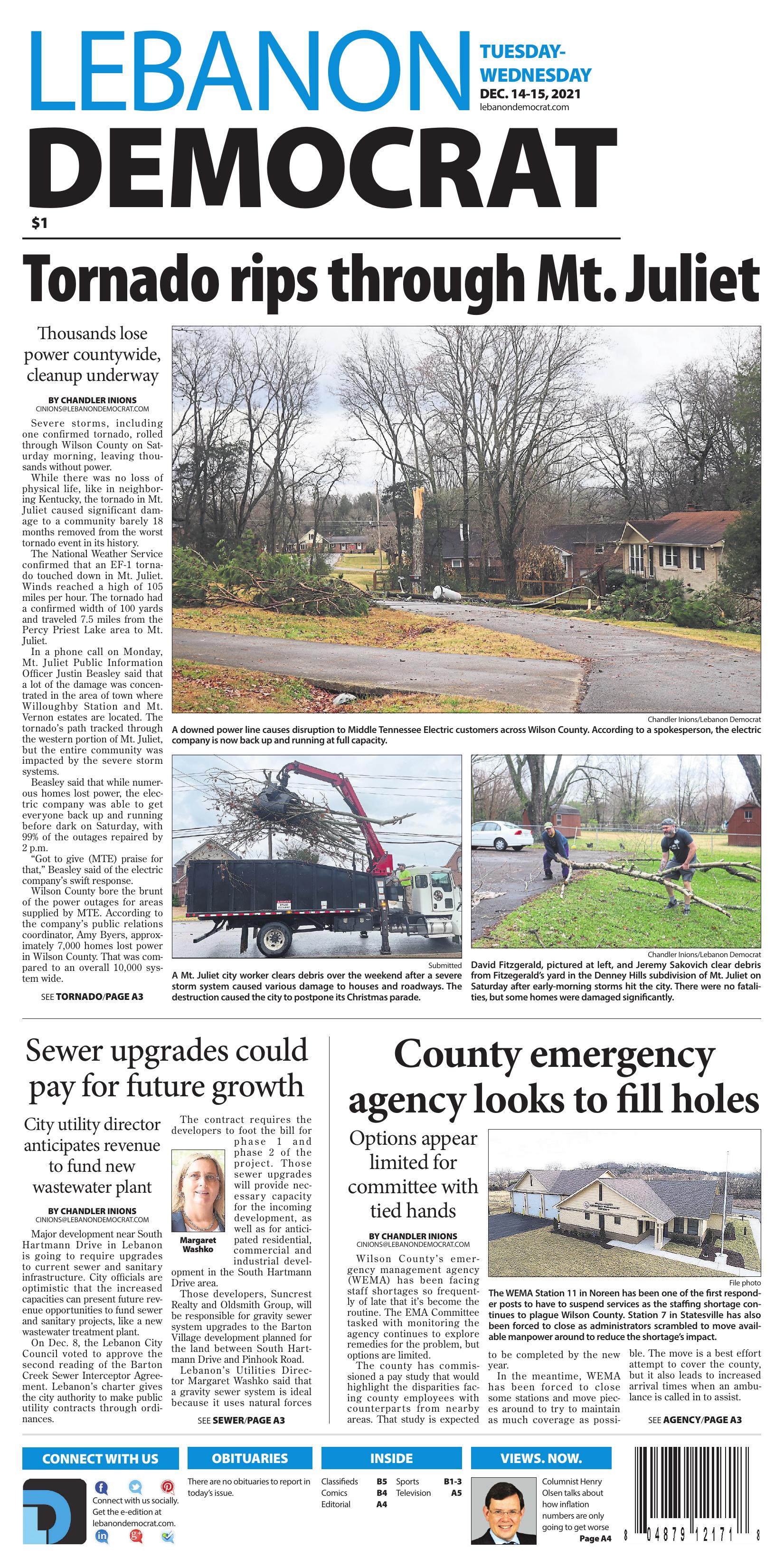 Several homes in Mt. Juliet experienced significant damage after a tornado swept across the city on Saturday morning. It was the second destructive tornado to hit the city in the past two years.

A downed power line causes disruption to Middle Tennessee Electric customers across Wilson County. According to a spokesperson, the electric company is now back up and running at full capacity.

Fire Department of Mt. Juliet Chief Jamie Luffman, pictured at left, speaks with a Mt. Juliet resident in the aftermath of the Saturday morning storms.

A Mt. Juliet city worker clears debris over the weekend after a severe storm system caused various damage to houses and roadways. The destruction caused the city to postpone its Christmas parade.

David Fitzgerald, pictured at left, and Jeremy Sakovich clear debris from Fitzegerald’s yard in the Denney Hills subdivision of Mt. Juliet on Saturday after early-morning storms hit the city. There were no fatalities, but some homes were damaged significantly.

While there was no loss of physical life, like in neighboring Kentucky, the tornado in Mt. Juliet caused significant damage to a community barely 18 months removed from the worst tornado event in its history.

The National Weather Service confirmed that an EF-1 tornado touched down in Mt. Juliet. Winds reached a high of 105 miles per hour. The tornado had a confirmed width of 100 yards and traveled 7.5 miles from the Percy Priest Lake area to Mt. Juliet.

In a phone call on Monday, Mt. Juliet Public Information Officer Justin Beasley said that a lot of the damage was concentrated in the area of town where Willoughby Station and Mt. Vernon estates are located. The tornado’s path tracked through the western portion of Mt. Juliet, but the entire community was impacted by the severe storm systems.

Beasley said that while numerous homes lost power, the electric company was able to get everyone back up and running before dark on Saturday, with 99% of the outages repaired by 2 p.m.

“Got to give (MTE) praise for that,” Beasley said of the electric company’s swift response.

Wilson County bore the brunt of the power outages for areas supplied by MTE. According to the company’s public relations coordinator, Amy Byers, approximately 7,000 homes lost power in Wilson County. That was compared to an overall 10,000 system wide.

The storm also disrupted plans for the Mt. Juliet Christmas parade. The event that was scheduled for Saturday had to be postponed. A makeup date is scheduled for this upcoming Saturday.

The WEMA Station 11 in Noreen has been one of the first responder posts to have to suspend services as the staffing shortage continues to plague Wilson County. Station 7 in Statesville has also been forced to close as administrators scrambled to move available manpower around to reduce the shortage’s impact.

Wilson County’s emergency management agency (WEMA) has been facing staff shortages so frequently of late that it’s become the routine. The EMA Committee tasked with monitoring the agency continues to explore remedies for the problem, but options are limited.

The county has commissioned a pay study that would highlight the disparities facing county employees with counterparts from nearby areas. That study is expected to be completed by the new year.

In the meantime, WEMA has been forced to close some stations and move pieces around to try to maintain as much coverage as possible. The move is a best effort attempt to cover the county, but it also leads to increased arrival times when an ambulance is called in to assist.

For perspective, a fully-staffed shift covering the entire county comprises a total of 41 people, including 17 emergency medical technicians (EMTs) and 17 paramedics. With those in place, advanced life support can be offered on all 11 ambulances in operation throughout the county, with a minimum of 11 paramedics. Those totals, by the county’s estimation, would provide comprehensive coverage to the 150,000 residents.

In reality, for every single shift, numerous personnel are missing. That has caused the county to improvise, trying to extend the most coverage, given the limitations of their resources. However, without any incoming employees, those resources are continuously strained, and the situation seems to be only getting worse.

Since applications opened in September, there have only been five applications submitted. Two of those were part-time requests from former WEMA employees who left to seek full-time opportunities elsewhere.

Only one application has been taken for a paramedic position.

The primary difference between EMTs and paramedics involves the complexity of the services that each can provide. EMTs are equipped to handle basic health procedures, such as performing CPR (Cardiopulmonary resuscitation). On the other hand, paramedics can be tasked with administration of IV lines and drugs.

Throughout conversations on the issue, WEMA officials have identified two areas lacking in competitiveness with comparable positions in other counties. The two areas perceived to be lacking are pay and the employees’ well-being.

Commissioner Lauren Breeze serves on the EMA committee. She said that she has been in talks with WEMA leadership to try to understand what has caused the emergence of the issue.

“When we did the budget in June, there wasn’t anything discussed,” Breeze said. “What caught us off guard is that we didn’t realize we had a problem.”

As of late, competing counties have increased pay and benefits to prospective hires, drawing away qualified applicants from Wilson County.

“I think what has happened is the majority of the surrounding counties have done something since June,” said Breeze.

Breeze said that approving such increases based on non-recurring revenue would be similar to kicking the can down the road, because the matter will have to be revisited as soon as those funds run out.

Albeit temporary, an EMT in Sumner County saw their pay increase by 15%. Paramedics, on the other hand, saw a 19% increase. Summer County EMS used these figures to promote an available position on its Facebook page in October.

In Rutherford County, the emergency agency adopted a new scheduling model, likely improving employees’ well-being. It moved to a 24-hour-on, 72-hour=-off model in July. Wilson County’s model is currently 24 hours on, 48 hours off. While Rutherford didn’t include a pay raise as steep as Sumner County, it still gave personnel a 4% wage increase.

Montgomery County did a little bit of both. It increased salaries by 22% and moved to 12-hour shifts.

Compared to counterparts in neighboring counties, WEMA personnel are more trained in a variety of emergency-response scenarios. Where other counties have firefighters and paramedics receiving individualized training, Wilson County employs individuals who possess both.

Young said that while that is an asset to the county and an asset to those on the receiving end of medical transport, it’s a contentious issue for the employees who don’t feel they are being compensated accordingly.

The committee has discovered that to get that pay up is not going to be an easy fix. Any increased pay could only come with an increased revenue stream.

As for long-term viability, there are three ways for a county to increase revenue. In Wilson County’s case, there are actually only two, because the sales tax (9.75%) is already maxed out.

The options are an increased wheel tax, which would require a referendum, or a property-tax increase. However, both of those options won’t address the short-term problem, because they can’t be voted on until next year. Immediate solutions may only be available through general-fund dollars or ARP funds. A move like that would fall under permitted uses for those funds.

As for a long-term solution, the most feasible revenue possibility to clog the hole is an increased property-tax rate. Members of the EMA committee acknowledge that is a contentious issue but said that now is no time to play politics.

Last month, Commissioner Justin Smith urged his fellow committee members to consider whatever is necessary to increase retention rates, even if it means a tax increase.

“We are in a crisis, and something has to be done,” Smith said.

Another county commissioner whose district has been most affected by stations closing, Sara Patton, agreed with Smith.

“Just because it’s an election year doesn’t mean you should hide behind it until next year,” Patton said.

Major development near South Hartmann Drive in Lebanon is going to require upgrades to current sewer and sanitary infrastructure. City officials are optimistic that the increased capacities can present future revenue opportunities to fund sewer and sanitary projects, like a new wastewater treatment plant.

The contract requires the developers to foot the bill for phase 1 and phase 2 of the project. Those sewer upgrades will provide necessary capacity for the incoming development, as well as for anticipated residential, commercial and industrial development in the South Hartmann Drive area.

Those developers, Suncrest Realty and Oldsmith Group, will be responsible for gravity sewer system upgrades to the Barton Village development planned for the land between South Hartmann Drive and Pinhook Road.

Lebanon’s Utilities Director Margaret Washko said that a gravity sewer system is ideal because it uses natural forces to move the water in the direction of the treatment plant instead of requiring pumping stations.

The entire upgrade is doled out in phases, outlined by the utilities department. For now, the attention is on phase 1 and 2, which are estimated to be completed by November of 2023.

The city agreed to complete all actions necessary to begin installations of the necessary sewer interceptor improvements by June 1, 2022, for phase 1 of the project.

For phase 2 of the project, the city agreed to commence construction on the improvements by Nov. 1, 2022.

Mayor Rick Bell said in his bi-weekly update on Monday that “having this funding in place ensures that the costs will not be passed along to the taxpayers.”

“The Lebanon City Council and I are focused on making sure the cost of growth is not the burden of current residents,” Bell said.

The contract approved by the city council also states that the developers intend to contribute to improvements related to the interceptor agreement to allow for the use of nearby properties to benefit from the improvements.

An element of the growth that city officials are anticipating is the expansion of sewer capacity in that area of town. Through a special assessment levied on developers and future property owners, the increased capacity should create a viable revenue stream, at least that is the hope of city officials.

A special assessment is a tax on property owners to pay for specific local infrastructure projects, such as the construction or maintenance of roads or sewer lines. The tax is charged only to the owners of property in the neighborhood that will benefit from the project.

Given the expected influx of revenue, the city is turning its attention to the 55-year-old wastewater treatment plant that services the area.

The utilities director mentioned that the upgrade to the system will be felt in two ways, a much-needed new plant, and room for more growth.

“There is the piece that is at the end of its life (the plant), and the capacity increase that is needed for new development,” Washko said.

Washko estimated that Lebanon could see a groundbreaking on the new plant occur within three years.