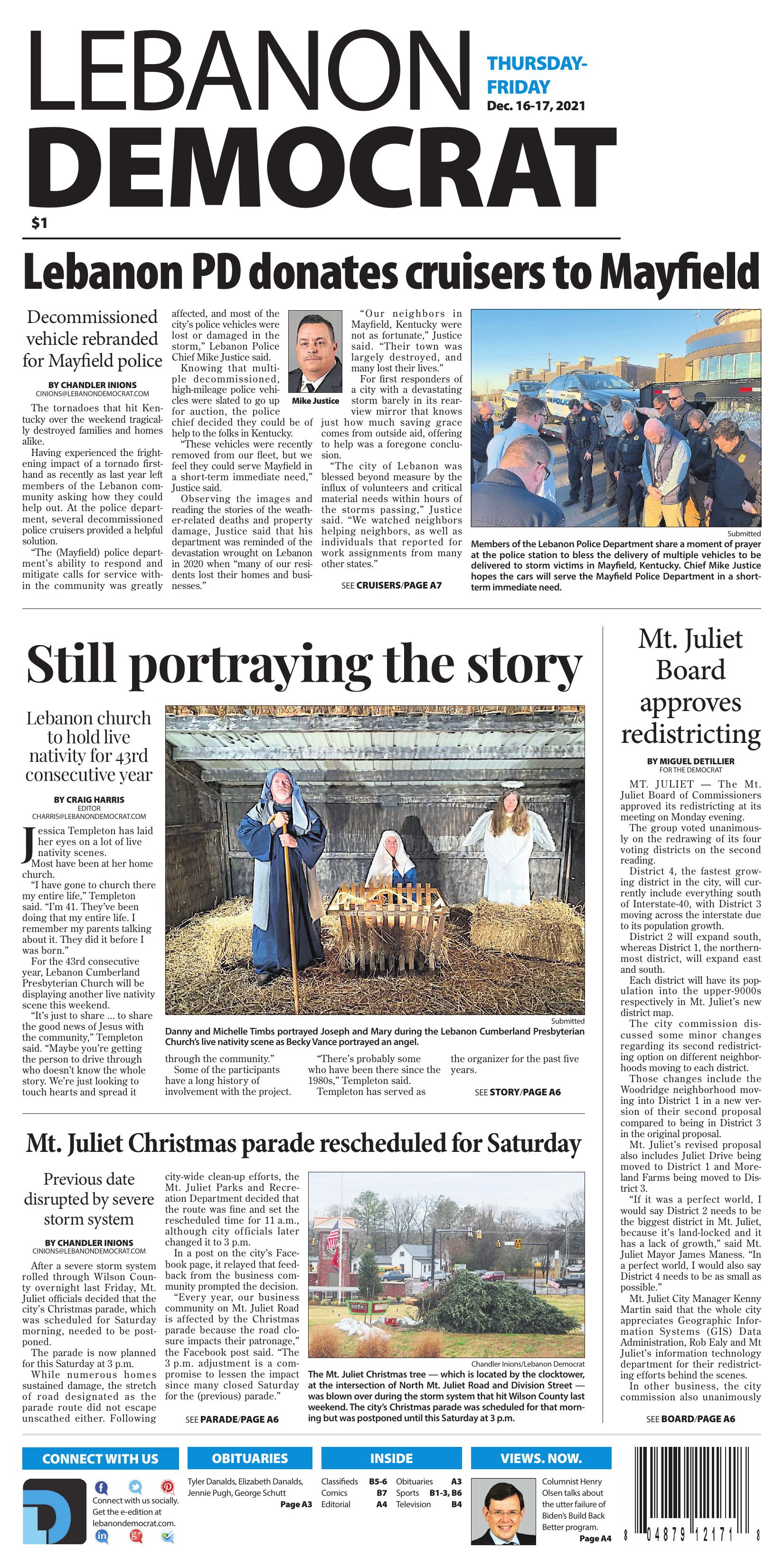 Members of the Lebanon Police Department share a moment of prayer at the police station to bless the delivery of multiple vehicles to be delivered to storm victims in Mayfield, Kentucky. Chief Mike Justice hopes the cars will serve the Mayfield Police Department in a short-term immediate need.

Two of the decommissioned police cruisers are loaded up on the trailer bound for Mayfield, Kentucky. The vehicles were slated to go up for police auction, but Lebanon Police Chief Mike Justice had another idea.

The tornadoes that hit Kentucky over the weekend tragically destroyed families and homes alike.

Having experienced the frightening impact of a tornado first-hand as recently as last year left members of the Lebanon community asking how they could help out. At the police department, several decommissioned police cruisers provided a helpful solution.

“The (Mayfield) police department’s ability to respond and mitigate calls for service within the community was greatly affected, and most of the city’s police vehicles were lost or damaged in the storm,” Lebanon Police Chief Mike Justice said.

Knowing that multiple decommissioned, high-mileage police vehicles were slated to go up for auction, the police chief decided they could be of help to the folks in Kentucky.

“These vehicles were recently removed from our fleet, but we feel they could serve Mayfield in a short-term immediate need,” Justice said.

Observing the images and reading the stories of the weather-related deaths and property damage, Justice said that his department was reminded of the devastation wrought on Lebanon in 2020 when “many of our residents lost their homes and businesses.”

“Our neighbors in Mayfield, Kentucky were not as fortunate,” Justice said. “Their town was largely destroyed, and many lost their lives.”

For first responders of a city with a devastating storm barely in its rear-view mirror that knows just how much saving grace comes from outside aid, offering to help was a foregone conclusion.

“The city of Lebanon was blessed beyond measure by the influx of volunteers and critical material needs within hours of the storms passing,” Justice said. “We watched neighbors helping neighbors, as well as individuals that reported for work assignments from many other states.”

The effort was aided by the owners of Advanced Signs, David and Sue Tompkins. The Tompkins offered to remove the Lebanon sign from the cruisers, painting Mayfield in its place.

The three patrol vehicles will be sent to Mayfield immediately to begin operation upon delivery.

Justice asked that the community “remember (Mayfield) in your thoughts and prayers, and if you can assist them in any way, we encourage you to do so.”

Lebanon Cumberland Presbyterian Church will be having a live nativity scene for the 43rd consecutive year on Friday and Saturday evenings, from 7 until 8:30.

In a scene portraying that there was no room at the inn, Spencer Pope (far right) portrayed the innkeeper — along with his son, Tanner Pope (second from right) — while Cynthia Manning (far left) and John Ryan Manning portrayed Mary and Joseph.

Jessica Templeton has laid her eyes on a lot of live nativity scenes.

Most have been at her home church.

“I have gone to church there my entire life,” Templeton said. “I’m 41. They’ve been doing that my entire life. I remember my parents talking about it. They did it before I was born.”

For the 43rd consecutive year, Lebanon Cumberland Presbyterian Church will be displaying another live nativity scene this weekend.

“It’s just to share ... to share the good news of Jesus with the community,” Templeton said. “Maybe you’re getting the person to drive through who doesn’t know the whole story. We’re just looking to touch hearts and spread it through the community.”

Some of the participants have a long history of involvement with the project.

“There’s probably some who have been there since the 1980s,” Templeton said.

Templeton has served as the organizer for the past five years.

“After Halloween, I switch to nativity mode,” Templeton said. “I have a sign-up. I put out sign-up sheets that next Sunday (after Halloween).

“This year, it’s been awesome. There’s been so many people willing to sign up. Every scene is filled, and we even have back-ups. People are ready to celebrate Christmas.”

The project has grown since its inception.

“When it first started, it was just a manger scene,” Templeton said. “Now, we have 10 scenes.

“We start with an angel coming to Mary, and we end with the birth of Jesus.”

The scenes were redesigned in the early 2000s and have remained that way since that time.

Attendees drive through to see the various displays.

“You enter in through the Castle Heights (Avenue) entrance,” Templeton said. “There’s a radio station you turn to. It’s 91.9. The story plays over the radio as they drive through.”

The COVID pandemic impacted the live nativity scene a year ago.

“We kind of downsized it,” Templeton said. “We didn’t have as many people participating … but we still had it.”

“We’ve cut the time due to having to downsize the number of people,” Templeton said. “Last year, we had 500 cars between the two nights. It’s a constant thing of cars driving through.

“We’re reaching a lot of people I feel like.”

One of the highlights is the live animals, which are provided by DLG Livestock and Petting Zoo.

“There’s animals in the scenes,” Templeton said. “The kids love that. There’s sheep, donkeys, oxen and a camel … the camel is everybody’s favorite.”

While there is a chance of rain in this weekend’s weather forecast, Templeton indicated that it will take place regardless. Only once has weather forced a night to be canceled, with that decision being made due to the recommendation of the Wilson County Emergency Management Agency (WEMA).

Many members of the congregation — which consists of approximately 200 individuals at its Sunday worship services and approximately 300 members — contribute, in a variety of ways.

“There’s probably 80 hands (involved), from people standing out in the scenes to the guys constructing scenes,” Templeton said. “There’s some elementary-school kids who are the angels and shepherds. Whoever wants to and can stay out there is welcome to do so.

“Then, we have people bringing food to feed us. People will come early both nights. We have food, and there’s some fellowshipping. It’s another excuse to spend time together.”

And while the church — which is located at 522 Castle Heights Ave. in Lebanon (at the corner of Castle Heights Avenue and Leeville Pike) — is attempting to convey a message about the birth of Jesus Christ to the community, the event also serves to help unify the congregation.

“Everyone at church is joyful about it,” Templeton said. “It’s their favorite time.

“I don’t have to beg people to do it. They love to do it and want to go out and do it. It’s pretty awesome.”

The Mt. Juliet Christmas tree — which is located by the clocktower, at the intersection of North Mt. Juliet Road and Division Street — was blown over during the storm system that hit Wilson County last weekend. The city’s Christmas parade was scheduled for that morning but was postponed until this Saturday at 3 p.m.

After a severe storm system rolled through Wilson County overnight last Friday, Mt. Juliet officials decided that the city’s Christmas parade, which was scheduled for Saturday morning, needed to be postponed.

The parade is now planned for this Saturday at 3 p.m.

While numerous homes sustained damage, the stretch of road designated as the parade route did not escape unscathed either. Following city-wide clean-up efforts, the Mt. Juliet Parks and Recreation Department decided that the route was fine and set the rescheduled time for 11 a.m., although city officials later changed it to 3 p.m.

In a post on the city’s Facebook page, it relayed that feedback from the business community prompted the decision.

“Every year, our business community on Mt. Juliet Road is affected by the Christmas parade because the road closure impacts their patronage,” the Facebook post said. “The 3 p.m. adjustment is a compromise to lessen the impact since many closed Saturday for the (previous) parade.”

The city added that it did not want to cancel altogether because “many kiddos and families put a lot of hard work and creativity in their parade floats, and many were looking forward to (the) joy a parade brings.”

In a phone call on Wednesday, the parks and recreation department’s event coordinator, Erin Farmer, said that the route will remain the same.

Farmer mentioned that one positive about the time change is that the parade will now run right into the next event, the lighting of the Christmas tree. That ceremony will begin as soon as the parade concludes, where before there was an approximate two-hour window between the events.

Those festivities will be centered around the town center clocktower and will be hosted by Shiloh Baptist Church. Food trucks will be on site, as well as ornament-decorating opportunities for children and the chance to sing Christmas carols.

Unfortunately, it’s not all silver linings. Farmer said that the number of participants in the parade will likely decrease by as much as half. That is due in large part to the schools being on holiday break by that time, as opposed to Dec. 11 when class was still in session.

As a result, participation from parade mainstays like school bands, clubs and ROTC organizations is expected to be down.

The parade officially begins at the Little League baseball fields on Lebanon Road. The Mt. Juliet Police Department will begin closing roads in this area at 2:45 p.m.

MT. JULIET — The Mt. Juliet Board of Commissioners approved its redistricting at its meeting on Monday evening.

The group voted unanimously on the redrawing of its four voting districts on the second reading.

District 4, the fastest growing district in the city, will currently include everything south of Interstate-40, with District 3 moving across the interstate due to its population growth.

District 2 will expand south, whereas District 1, the northernmost district, will expand east and south.

Each district will have its population into the upper-9000s respectively in Mt. Juliet’s new district map.

The city commission discussed some minor changes regarding its second redistricting option on different neighborhoods moving to each district.

Those changes include the Woodridge neighborhood moving into District 1 in a new version of their second proposal compared to being in District 3 in the original proposal.

In other business, the city commission also unanimously passed a preliminary master development plan for the Village at Pleasant Grove on second reading.

The development has a total of 110,000 square feet, and its residential density measures at 13 units per acre.

Planned amenities will include a pool for the multi-family buildings in a courtyard between buildings F and G, a dog park, a fitness center, a community room, shared workspaces, and a village green area.

Imagine1 Company — which is a residential, hospitality, and retail property-development company, and the project’s developers — said that those amenities will be contained within the buildings.

The area for these amenities will be at a minimum of 5,500 square feet.

The city commission also unanimously passed an amendment to revise its laws for liquor stores.

The revisions include eliminating residency requirements and bi-annual renewals for liquor stores and having them provide no more than six retail liquor licenses when issuing one for each 8,000 retailers.