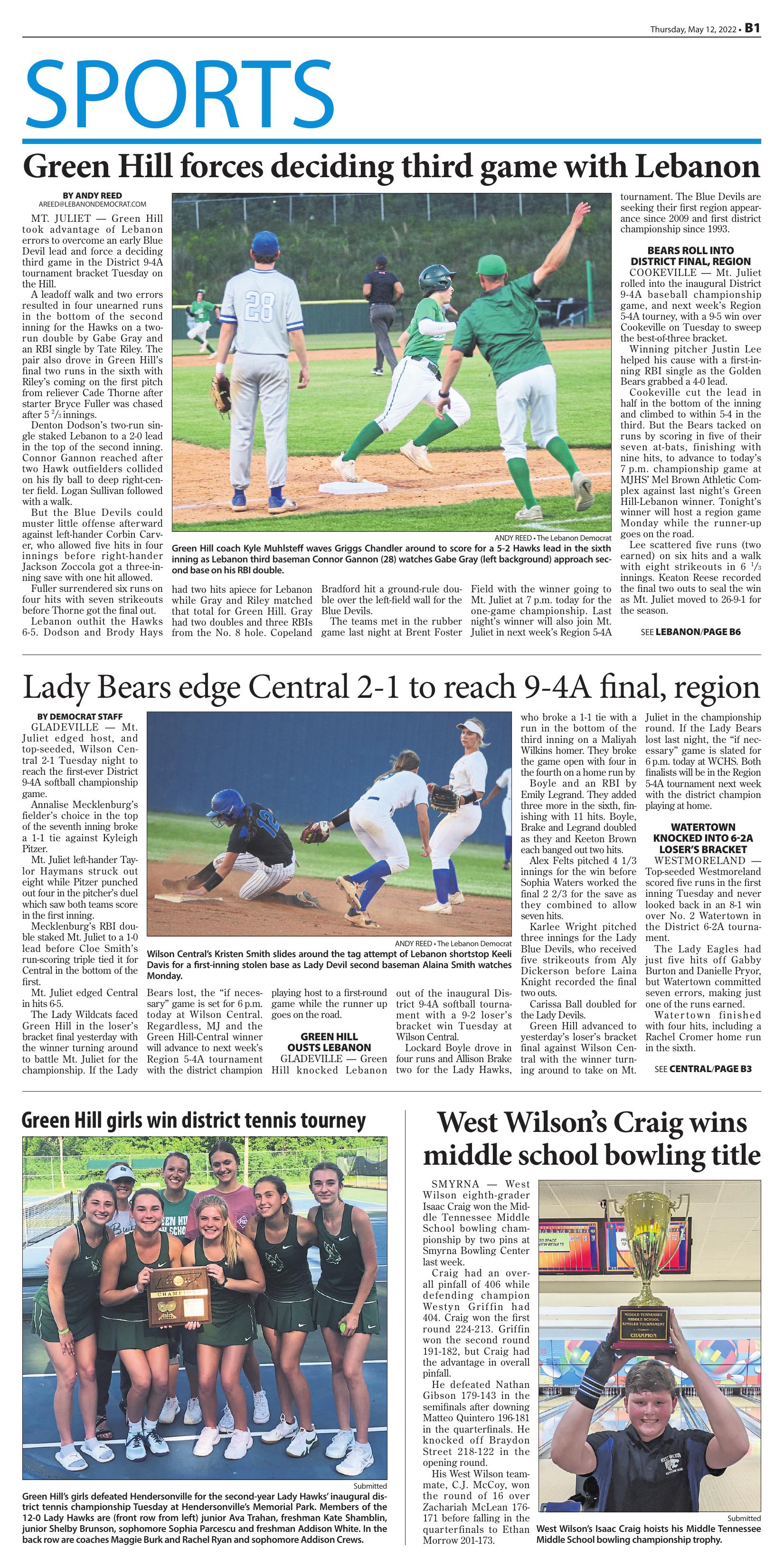 MT. JULIET — Green Hill took advantage of Lebanon errors to overcome an early Blue Devil lead and force a deciding third game in the District 9-4A tournament bracket Tuesday on the Hill.

A leadoff walk and two errors resulted in four unearned runs in the bottom of the second inning for the Hawks on a two-run double by Gabe Gray and an RBI single by Tate Riley. The pair also drove in Green Hill’s final two runs in the sixth with Riley’s coming on the first pitch from reliever Cade Thorne after starter Bryce Fuller was chased after 5 2/3 innings.

Denton Dodson’s two-run single staked Lebanon to a 2-0 lead in the top of the second inning. Connor Gannon reached after two Hawk outfielders collided on his fly ball to deep right-center field. Logan Sullivan followed with a walk.

But the Blue Devils could muster little offense afterward against left-hander Corbin Carver, who allowed five hits in four innings before right-hander Jackson Zoccola got a three-inning save with one hit allowed.

Fuller surrendered six runs on four hits with seven strikeouts before Thorne got the final out.

Lebanon outhit the Hawks 6-5. Dodson and Brody Hays had two hits apiece for Lebanon while Gray and Riley matched that total for Green Hill. Gray had two doubles and three RBIs from the No. 8 hole. Copeland Bradford hit a ground-rule double over the left-field wall for the Blue Devils.

The teams met in the rubber game last night at Brent Foster Field with the winner going to Mt. Juliet at 7 p.m. today for the one-game championship. Last night’s winner will also join Mt. Juliet in next week’s Region 5-4A tournament. The Blue Devils are seeking their first region appearance since 2009 and first district championship since 1993.

Bears roll into district final, regionCOOKEVILLE — Mt. Juliet rolled into the inaugural District 9-4A baseball championship game, and next week’s Region 5-4A tourney, with a 9-5 win over Cookeville on Tuesday to sweep the best-of-three bracket.

Winning pitcher Justin Lee helped his cause with a first-inning RBI single as the Golden Bears grabbed a 4-0 lead.

Cookeville cut the lead in half in the bottom of the inning and climbed to within 5-4 in the third. But the Bears tacked on runs by scoring in five of their seven at-bats, finishing with nine hits, to advance to today’s 7 p.m. championship game at MJHS’ Mel Brown Athletic Complex against last night’s Green Hill-Lebanon winner. Tonight’s winner will host a region game Monday while the runner-up goes on the road.

Lee scattered five runs (two earned) on six hits and a walk with eight strikeouts in 6 1/3 innings. Keaton Reese recorded the final two outs to seal the win as Mt. Juliet moved to 26-9-1 for the season.

Tannor Meyer hit a solo home run in the seventh inning among his two hits while Easton Krenzke tripled and singled. Austin Hunley had two doubles and two RBIs.

Watertown whips WestmorelandWESTMORELAND — Watertown breezed to the District 6-2A championship and booked a return trip to the region tournament with a 15-0 whipping of Westmoreland to complete a two-game sweep Tuesday night.

The Purple Tigers jumped to a 6-0 lead in the first inning and scored in their first four at-bats in the five-inning game.

Watertown finished with 15 hits, including three each by Kaden Seay and Mason Murrell, who both doubled. K.J. Wood and Kendal Bayse each singled twice while Alec Whitlock doubled and singled. Cyrus Bennett drove in three runs from the bottom of the order while Bayse and leadoff man Seay had two RBI apiece.

Watertown earned a home game for the one-game district championship which was either last night or will be at 6 p.m. today with the winner hosting a Region 3-2A game Monday while the runner-up goes on the road.

one-hitter lifts Lebanon past Green Hill in game 1Lebanon opened its inaugural District 9-4A tournament game with an 11-1 pounding of visiting Green Hill at Brent Foster Field on Monday.

A 10-run third inning did the damage for the Blue Devils as Jackson Lea, Brody Hays, Copeland Bradford, Connor Gannon and Logan Sullivan each drove in runs.

Hays finished the day with three RBIs while Lea and Bradford had two each. Bradford doubled as he had two of Lebanon’s nine hits. Sullivan tripled while Hays doubled.

Adam Partin had Green Hill’s only hit and RBI as he drove in Tate Riley in the fourth inning.

Carter Lee pitched three innings and gave up all 10 runs in the third to take the loss. Tate Curtis surrendered a fourth-inning score.

Purple Tigers take 1-0 lead in seriesWATERTOWN — Watertown took a 1-0 lead in its best-of-three District 6-2A series with an 8-0 shutout of Westmoreland on Monday.

Four pitchers combined to hold the Eagles to one hit and two walks with nine strikeouts. Alex Whitlock pitched the first three innings and was awarded the win as he left with a 7-0 lead. Charlie Mitchell, Zack Self and Kendal Bayse shared the final four frames.

Watertown notched nine hits, including doubles by Lance Fripp and Charlie Mitchell. Fripp, Kaden Seay and Mason Murrell each managed two hits with Murrell and Fripp driving in two runs apiece as the Purple Tigers improved to 20-9 for the season.

Hunley shuts out Cookeville in MJ openerMT. JULIET — Mt. Juliet remained perfect against district competition and moved to within a win of the region tournament with a 2-0 win over Cookeville on Monday at the Mel Brown Athletic Complex. Austin Hunley pitched a complete-game two-hitter with no walks and 10 strikeouts on 78 pitches.

The Bears, who finished with six hits, scored both their runs in the third inning with Easton Krenzke getting the game’s only RBI. Baylor Osborne tripled and Justin Lee doubled as both scored Mt. Juliet’s runs.

Annalise Mecklenburg’s fielder’s choice in the top of the seventh inning broke a 1-1 tie against Kyleigh Pitzer.

Mt. Juliet left-hander Taylor Haymans struck out eight while Pitzer punched out four in the pitcher’s duel which saw both teams score in the first inning.

Mecklenburg’s RBI double staked Mt. Juliet to a 1-0 lead before Cloe Smith’s run-scoring triple tied it for Central in the bottom of the first.

The Lady Wildcats faced Green Hill in the loser’s bracket final yesterday with the winner turning around to battle Mt. Juliet for the championship. If the Lady Bears lost, the “if necessary” game is set for 6 p.m. today at Wilson Central. Regardless, MJ and the Green Hill-Central winner will advance to next week’s Region 5-4A tournament with the district champion playing host to a first-round game while the runner up goes on the road.

Lockard Boyle drove in four runs and Allison Brake two for the Lady Hawks, who broke a 1-1 tie with a run in the bottom of the third inning on a Maliyah Wilkins homer. They broke the game open with four in the fourth on a home run by

Boyle and an RBI by Emily Legrand. They added three more in the sixth, finishing with 11 hits. Boyle, Brake and Legrand doubled as they and Keeton Brown each banged out two hits.

Alex Felts pitched 4 1/3 innings for the win before Sophia Waters worked the final 2 2/3 for the save as they combined to allow seven hits.

Green Hill advanced to yesterday’s loser’s bracket final against Wilson Central with the winner turning around to take on Mt. Juliet in the championship round. If the Lady Bears lost last night, the “if necessary” game is slated for 6 p.m. today at WCHS. Both finalists will be in the Region 5-4A tournament next week with the district champion playing at home.

Watertown knocked into 6-2A loser’s bracketWESTMORELAND — Top-seeded Westmoreland scored five runs in the first inning Tuesday and never looked back in an 8-1 win over No. 2 Watertown in the District 6-2A tournament.

The Lady Eagles had just five hits off Gabby Burton and Danielle Pryor, but Watertown committed seven errors, making just one of the runs earned.

Watertown finished with four hits, including a Rachel Cromer home run in the sixth.

Burton pitched four innings and was charged with all eight runs before Pryor pitched the final two frames.

Watertown played for its season in the loser’s bracket yesterday with the winner turning around for a rematch with Westmoreland.

Lady Wildcats drop Lebanon into 9-4A loser’s bracketGLADEVILLE — Wilson Central advanced in the District 9-4A tournament with a 7-2 win over Lebanon on Monday.

The Lady Wildcats blew open a 1-0 lead with five runs in the third inning. Maddison Stowell and Cassidy Goddard each drove in two runs. Cloe Smith had four of Central’s 12 hits while Taelor Chang chipped in with two.

Kenzie Miller held Lebanon to single scores in the fifth and seventh innings as the Lady Devils finished with five hits while striking out nine times.

The Lady Hawks scored six runs in the first inning. Emily Legrand led off with a home run and Maliyah Wilkins went deep later in the inning. Wilkins hit her second bomb of the game, with a runner on, during Green Hill’s three-run fifth inning. Allison Brake also homered.

Alex Felts pitched the first 5 1/3 innings, allowing four runs on 11 hits with no walks and five strikeouts. Hayley Miller recorded the final five outs, surrendering a hit and a pair of walks.

The Lady Tigers blew the game open with four scores in the top of the third inning for a 7-0 lead.

Madison Baskin homered in the first inning, Ali Tunks in the second and Abby Hall in the fourth to lead the Lady Tigers’ 13-hit attack.

Baskin drove in three runs while Hall and Tunks had two RBIs each.

The offensive onslaught helped Gabby Burton the the victory. 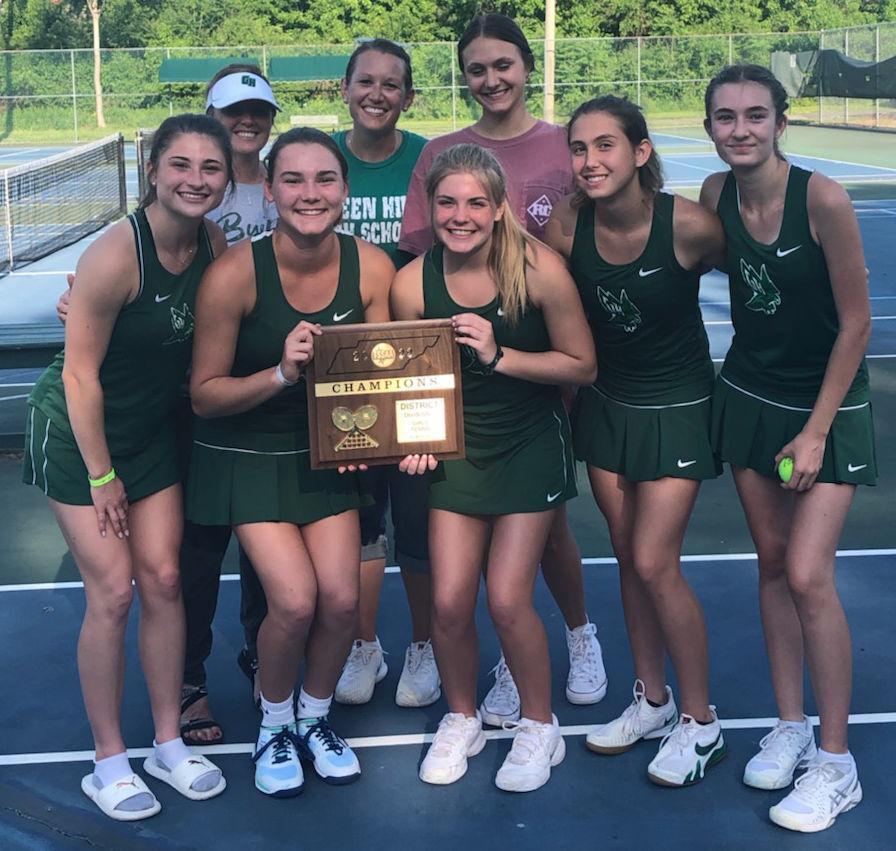 Craig had an overall pinfall of 406 while defending champion Westyn Griffin had 404. Craig won the first round 224-213. Griffin won the second round 191-182, but Craig had the advantage in overall pinfall.

He defeated Nathan Gibson 179-143 in the semifinals after downing Matteo Quintero 196-181 in the quarterfinals. He knocked off Braydon Street 218-122 in the opening round.

His West Wilson teammate, C.J. McCoy, won the round of 16 over Zachariah McLean 176-171 before falling in the quarterfinals to Ethan Morrow 201-173.