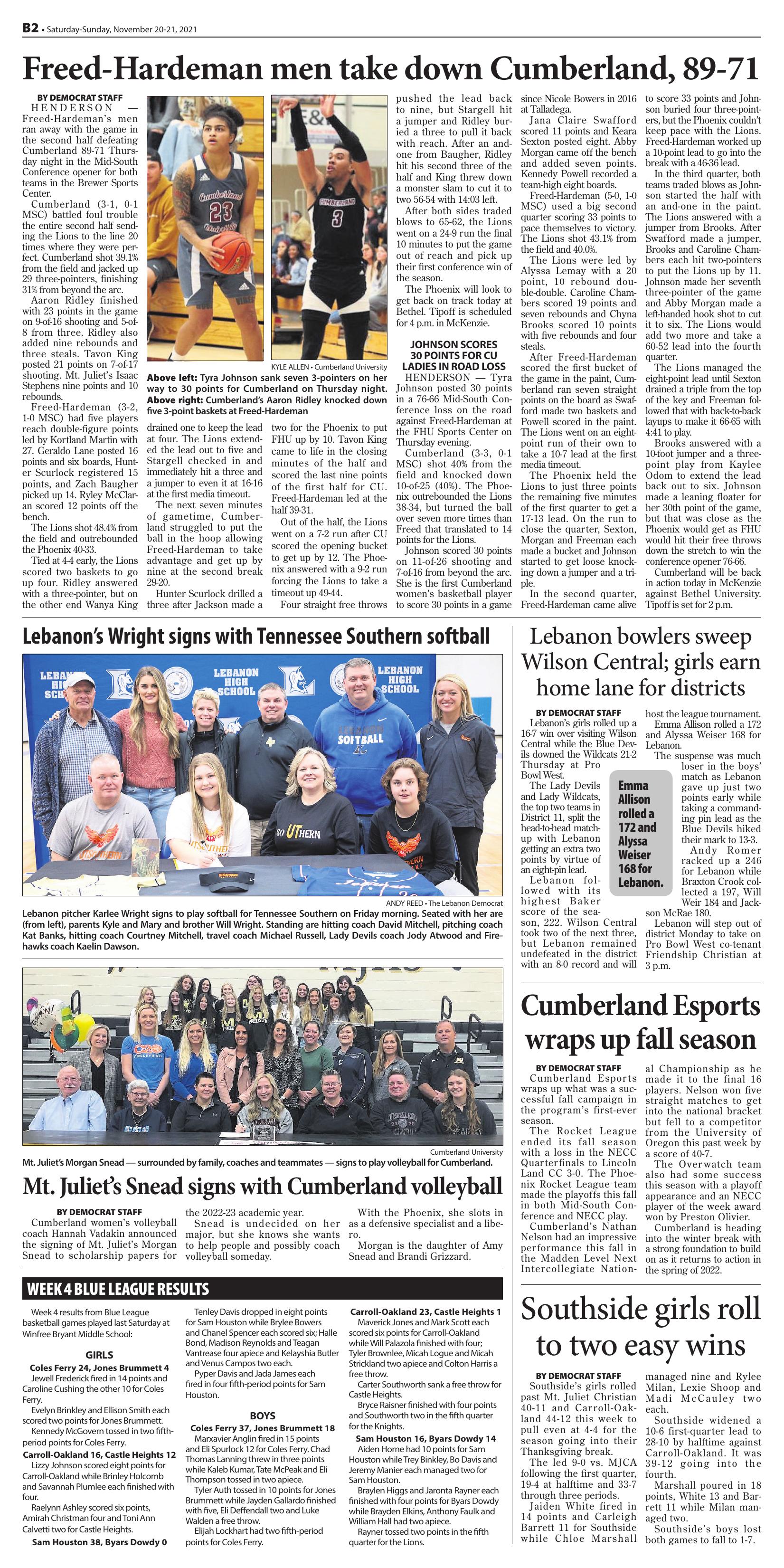 Above left: Tyra Johnson sank seven 3-pointers on her way to 30 points for Cumberland on Thursday night. Above right: Cumberland’s Aaron Ridley knocked down five 3-point baskets at Freed-Hardeman

HENDERSON — Freed-Hardeman’s men ran away with the game in the second half defeating Cumberland 89-71 Thursday night in the Mid-South Conference opener for both teams in the Brewer Sports Center.

Cumberland (3-1, 0-1 MSC) battled foul trouble the entire second half sending the Lions to the line 20 times where they were perfect. Cumberland shot 39.1% from the field and jacked up 29 three-pointers, finishing 31% from beyond the arc.

Aaron Ridley finished with 23 points in the game on 9-of-16 shooting and 5-of-8 from three. Ridley also added nine rebounds and three steals. Tavon King posted 21 points on 7-of-17 shooting. Mt. Juliet’s Isaac Stephens nine points and 10 rebounds.

Tied at 4-4 early, the Lions scored two baskets to go up four. Ridley answered with a three-pointer, but on the other end Wanya King drained one to keep the lead at four. The Lions extended the lead out to five and Stargell checked in and immediately hit a three and a jumper to even it at 16-16 at the first media timeout.

The next seven minutes of gametime, Cumberland struggled to put the ball in the hoop allowing Freed-Hardeman to take advantage and get up by nine at the second break 29-20.

Hunter Scurlock drilled a three after Jackson made a two for the Phoenix to put FHU up by 10. Tavon King came to life in the closing minutes of the half and scored the last nine points of the first half for CU. Freed-Hardeman led at the half 39-31.

Out of the half, the Lions went on a 7-2 run after CU scored the opening bucket to get up by 12. The Phoenix answered with a 9-2 run forcing the Lions to take a timeout up 49-44.

Four straight free throws pushed the lead back to nine, but Stargell hit a jumper and Ridley buried a three to pull it back with reach. After an and-one from Baugher, Ridley hit his second three of the half and King threw down a monster slam to cut it to two 56-54 with 14:03 left.

After both sides traded blows to 65-62, the Lions went on a 24-9 run the final 10 minutes to put the game out of reach and pick up their first conference win of the season.

The Phoenix will look to get back on track today at Bethel. Tipoff is scheduled for 4 p.m. in McKenzie.

Johnson scores 30 points for CU ladies in road lossHENDERSON — Tyra Johnson posted 30 points in a 76-66 Mid-South Conference loss on the road against Freed-Hardeman at the FHU Sports Center on Thursday evening.

Johnson scored 30 points on 11-of-26 shooting and 7-of-16 from beyond the arc. She is the first Cumberland women’s basketball player to score 30 points in a game since Nicole Bowers in 2016 at Talladega.

The Lions were led by Alyssa Lemay with a 20 point, 10 rebound double-double. Caroline Chambers scored 19 points and seven rebounds and Chyna Brooks scored 10 points with five rebounds and four steals.

After Freed-Hardeman scored the first bucket of the game in the paint, Cumberland ran seven straight points on the board as Swafford made two baskets and Powell scored in the paint. The Lions went on an eight-point run of their own to take a 10-7 lead at the first media timeout.

The Phoenix held the Lions to just three points the remaining five minutes of the first quarter to get a 17-13 lead. On the run to close the quarter, Sexton, Morgan and Freeman each made a bucket and Johnson started to get loose knocking down a jumper and a triple.

In the second quarter, Freed-Hardeman came alive to score 33 points and Johnson buried four three-pointers, but the Phoenix couldn’t keep pace with the Lions. Freed-Hardeman worked up a 10-point lead to go into the break with a 46-36 lead.

In the third quarter, both teams traded blows as Johnson started the half with an and-one in the paint. The Lions answered with a jumper from Brooks. After Swafford made a jumper, Brooks and Caroline Chambers each hit two-pointers to put the Lions up by 11. Johnson made her seventh three-pointer of the game and Abby Morgan made a left-handed hook shot to cut it to six. The Lions would add two more and take a 60-52 lead into the fourth quarter.

The Lions managed the eight-point lead until Sexton drained a triple from the top of the key and Freeman followed that with back-to-back layups to make it 66-65 with 4:41 to play.

Brooks answered with a 10-foot jumper and a three-point play from Kaylee Odom to extend the lead back out to six. Johnson made a leaning floater for her 30th point of the game, but that was close as the Phoenix would get as FHU would hit their free throws down the stretch to win the conference opener 76-66.

Cumberland will be back in action today in McKenzie against Bethel University. Tipoff is set for 2 p.m. 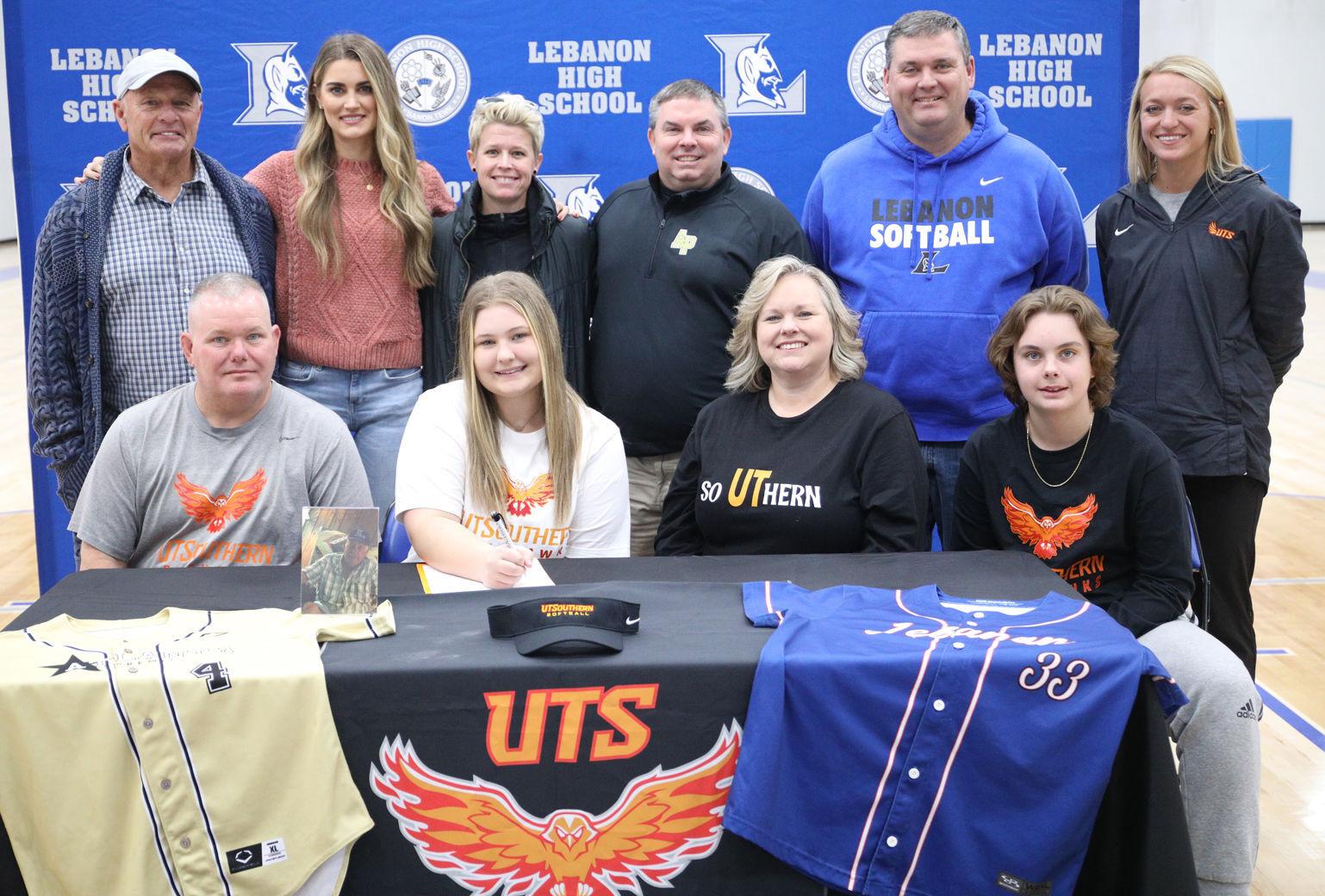 Snead is undecided on her major, but she knows she wants to help people and possibly coach volleyball someday.

With the Phoenix, she slots in as a defensive specialist and a libero.

Morgan is the daughter of Amy Snead and Brandi Grizzard.

Jewell Frederick fired in 14 points and Caroline Cushing the other 10 for Coles Ferry.

Bryce Raisner finished with four points and Southworth two in the fifth quarter for the Knights.

Rayner tossed two points in the fifth quarter for the Lions.

Lebanon’s girls rolled up a 16-7 win over visiting Wilson Central while the Blue Devils downed the Wildcats 21-2 Thursday at Pro Bowl West.

The Lady Devils and Lady Wildcats, the top two teams in District 11, split the head-to-head matchup with Lebanon getting an extra two points by virtue of an eight-pin lead.

Lebanon followed with its highest Baker score of the season, 222. Wilson Central took two of the next three, but Lebanon remained undefeated in the district with an 8-0 record and will host the league tournament.

Emma Allison rolled a 172 and Alyssa Weiser 168 for Lebanon.

The suspense was much loser in the boys’ match as Lebanon gave up just two points early while taking a commanding pin lead as the Blue Devils hiked their mark to 13-3.

Lebanon will step out of district Monday to take on Pro Bowl West co-tenant Friendship Christian at 3 p.m.

Cumberland Esports wraps up what was a successful fall campaign in the program’s first-ever season.

The Rocket League ended its fall season with a loss in the NECC Quarterfinals to Lincoln Land CC 3-0. The Phoenix Rocket League team made the playoffs this fall in both Mid-South Conference and NECC play.

Cumberland’s Nathan Nelson had an impressive performance this fall in the Madden Level Next Intercollegiate National Championship as he made it to the final 16 players. Nelson won five straight matches to get into the national bracket but fell to a competitor from the University of Oregon this past week by a score of 40-7.

The Overwatch team also had some success this season with a playoff appearance and an NECC player of the week award won by Preston Olivier.

Cumberland is heading into the winter break with a strong foundation to build on as it returns to action in the spring of 2022.

Southside’s girls rolled past Mt. Juliet Christian 40-11 and Carroll-Oakland 44-12 this week to pull even at 4-4 for the season going into their Thanksgiving break.

Southside widened a 10-6 first-quarter lead to 28-10 by halftime against Carroll-Oakland. It was 39-12 going into the fourth.

Southside’s boys lost both games to fall to 1-7.