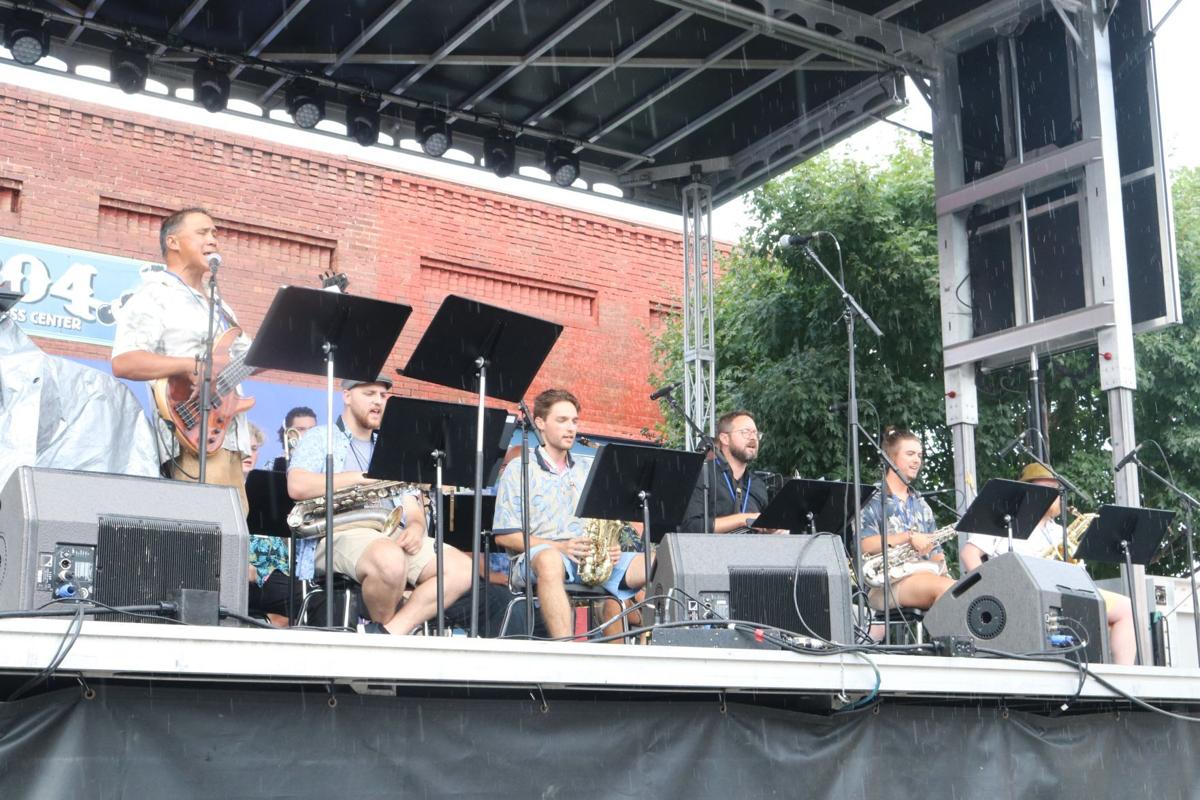 Gabe Lamog, left, and his group, the Nightingale Big Band, perform at the Watertown Jazz Fest on Saturday. 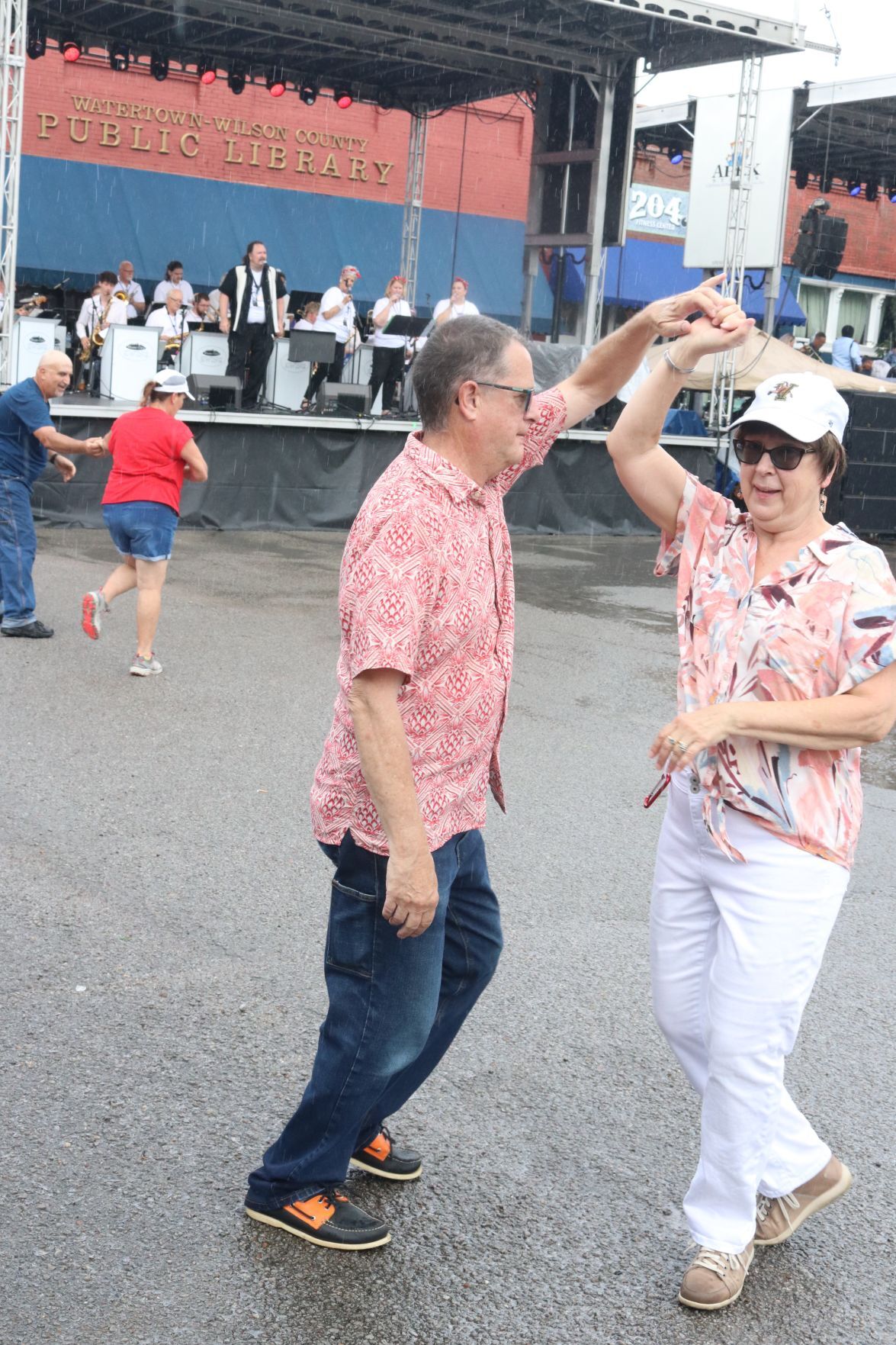 Bonnie and Steve Davis, of McMinnville, refuse to let a little water dampen their good time as the couple dances to Music City Swing in Watertown’s square Saturday. 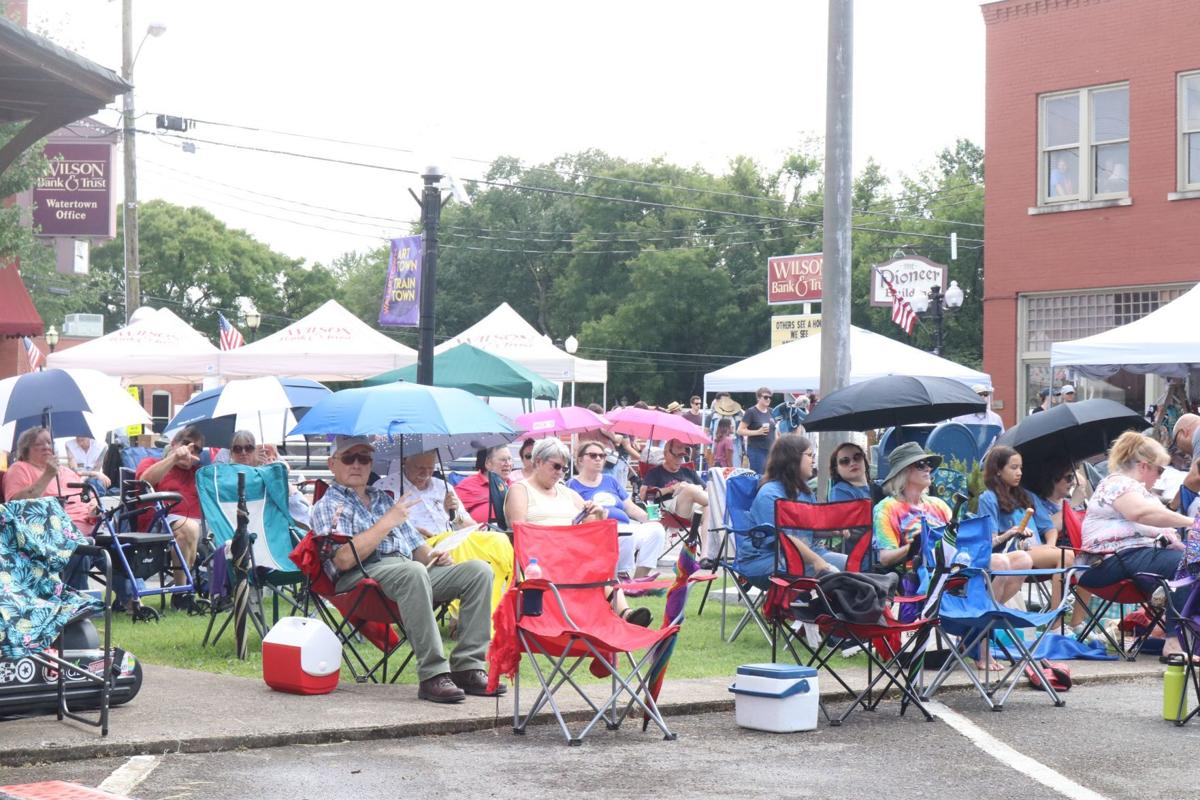 Encouraged to bring their own chairs and umbrellas, spectators take in some jazz despite the dreary afternoon forecast.

Gabe Lamog, left, and his group, the Nightingale Big Band, perform at the Watertown Jazz Fest on Saturday.

Bonnie and Steve Davis, of McMinnville, refuse to let a little water dampen their good time as the couple dances to Music City Swing in Watertown’s square Saturday.

Encouraged to bring their own chairs and umbrellas, spectators take in some jazz despite the dreary afternoon forecast.

A little bit of rain wasn’t enough to scare away attendees who flocked to Watertown’s historic square for this year’s Jazz Fest.

Event Director John Jewell said as they watched the forecasts, “we were fearful of thunderstorms and wind,” but said that rain wouldn’t be a deal-breaker.

For Jewell, he didn’t want to see the beloved event miss another year, as it was canceled last year amid the pandemic.

“A lot of people are interested in Jazz Fest,” he said. “We felt like we ought to go ahead and do it.”

The decision to go forward with the event turned out just fine even if some people did get a little wet. For one couple from McMinnville, dancing in the rain while Music City Swing performed Nat King Cole’s “Love,” made it all the more fun.

Bonnie and Steve Davis have been to Jazz Fest several times. For them it’s a chance to dance, eat and shop. “It’s always a good time,” she said. Steve Davis said he particularly liked that this year’s line up seemed to have more big bands than usual.

The normally two-day event condensed into one this year, but hardly compromised on talent. The all-star lineup featured performances from some prominent names in the local jazz scene including the Vantrease Jazz Band and the Nashville Jazz Orchestra.

While those high-profile performers headlined the night list, the whole show kicked off in grand fashion with Music City Swing at 1 p.m. and the music never stopped.

With side-by-side stages erected on the square, it was possible for one band to set up while another band performed, which really helped keep the music flowing throughout the day.

Another facet of the event was the local vendors who set up shop around the square. Kaitlyn Stillwell owns Wild Pony Collection, a vintage and repurposed boutique that does a lot of sales online. However, the Watertown native said there’s nothing quite like getting out in her hometown.

“I’m glad to be back. As a kid this was always the biggest event of the year,” she said. “Both my grandmothers lived within walking distance of the square. We would make a whole day of it.”

For some the event had been what drew them to Watertown in the first place. Marlene Robinson said she had been in Watertown since 2007 after discovering the festival, she ended up buying a house there. “I like this, the jazz, and I love this little town,” she said.

Watertown’s charm is perfectly encapsulated in this event. It combines everything about the city that makes it a wonderful place to be, as Gabe Lamog of the Nightingale Big Band can attest. His group was debuting live at the festival and he said he couldn’t think of a better place to do it.

The Nightingale Big Band is an 18-piece group that played Latin jazz for the dancing spectators.

“We picked Latin jazz, because we love it and it’s unique in middle Tennessee. Unless you’re in a Latin community you don’t see a lot of Latin jazz,” said the Los Angeles native.

Lamog and his wife, Diane Hibbs-Lamog, moved to the Nashville area in 1994 and slowly but surely have formed this group composed of college graduates and students from several surrounding universities including Belmont, Cumberland, Middle Tennessee State and Tennessee Tech., in addition to some college professors who are part of the mix.

Lamog formed a lot of these connections while attending Cumberland himself, graduating with a degree in music.

This commitment to music is what brought the band together, said Lamog.

“It’s all about continuing the tradition of jazz. A lot of them are involved in music education, while others aspire to be professional musicians,” he said. “The common theme is that they want music to be a part of their life.”

Of course, shows take a lot of work from the performers on stage. Hours upon hours of rehearsals make it all possible, but when those lights are shining and the music playing, it’s easy to overlook what goes on behind the scenes.

One volunteer, Dianne Werth, was shuttling band mates to and from their vehicles along with a host of other volunteers aiding in the effort. Werth has lived in Watertown for 10 years but this was her first Jazz Fest. The former volunteer firefighter from Ohio knows that it takes a team effort and was happy to pitch in.