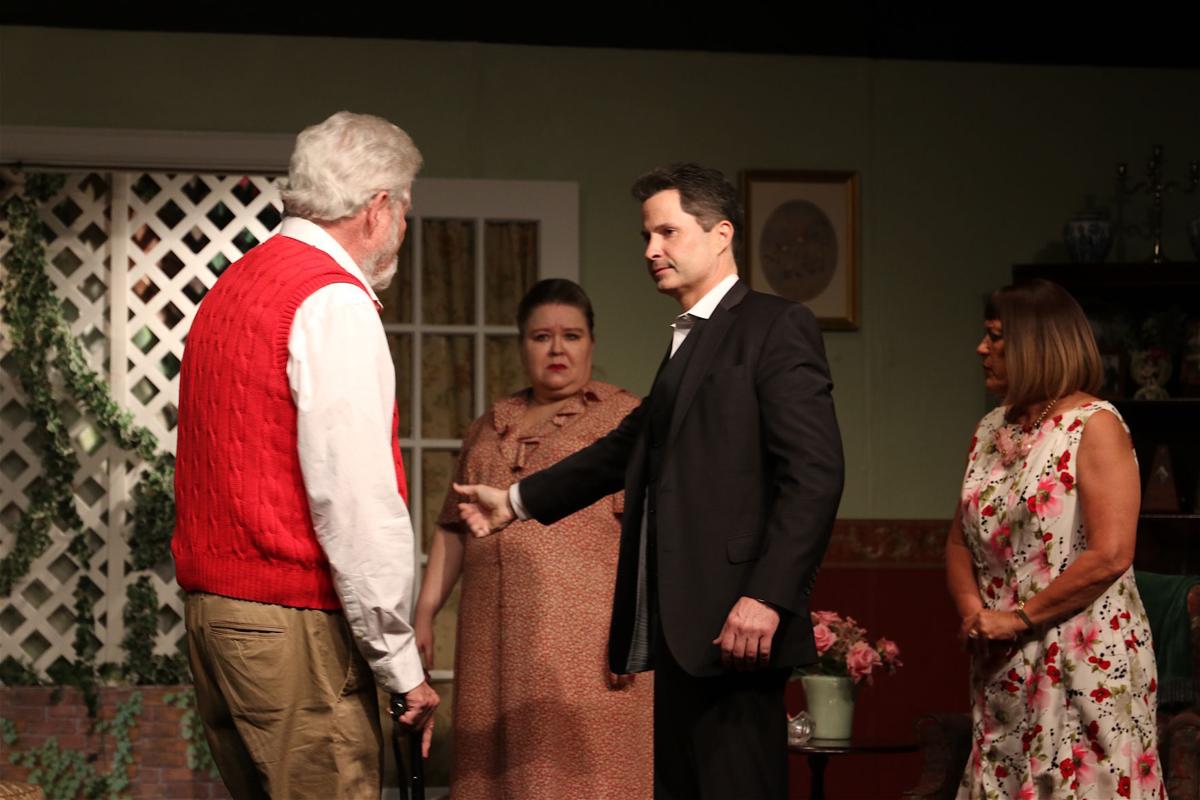 Encore Theatre Company holds a dress rehearsal for its production of “Take Away the Lady,” a murder mystery that originally debuted in the United Kingdom during the 1980s. From left are Tony Shannon as Charles Doubleday, Lanie Shannon as Lavinia Doubleday, Jayson Campbell as Matthew Doubleday and Holly Smith as Celia Owen. 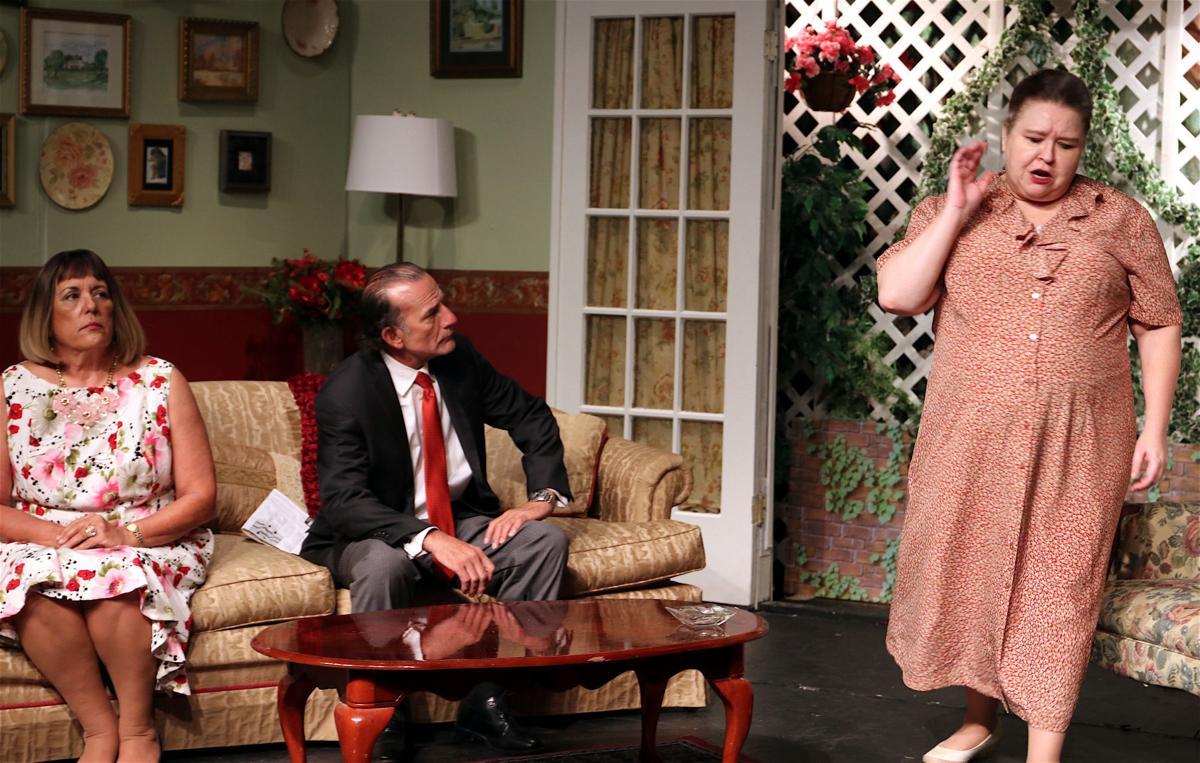 Actors in Encore Theatre Company’s productions like “Take Away the Lady” are given temperature checks at the door just like the audience, which combines with a mask requirement and socially distant seating to prevent COVID-19 spread. From left are Holly Smith as Celia Owen, Craig Hartline as Richard Owen and Lanie Shannon as Lavinia Doubleday.

Encore Theatre Company holds a dress rehearsal for its production of “Take Away the Lady,” a murder mystery that originally debuted in the United Kingdom during the 1980s. From left are Tony Shannon as Charles Doubleday, Lanie Shannon as Lavinia Doubleday, Jayson Campbell as Matthew Doubleday and Holly Smith as Celia Owen.

Actors in Encore Theatre Company’s productions like “Take Away the Lady” are given temperature checks at the door just like the audience, which combines with a mask requirement and socially distant seating to prevent COVID-19 spread. From left are Holly Smith as Celia Owen, Craig Hartline as Richard Owen and Lanie Shannon as Lavinia Doubleday.

The performing arts have been thrown into a world of uncertainty with COVID-19, but Wilson County’s community theaters are back in action and looking to help people unwind.

“We officially opened back up on June 4,” Capitol Theatre Executive Director Danielle Piercey said. “We had our production of ‘Guys and Dolls,’ and we just finished up ‘Willy Wonka Junior.’ We’re only at half capacity, so that’s 230 seats, but things have been going well. We were at 100 or more for our last show of ‘Willy Wonka.’ ”

Half-capacity and socially distanced seating are some of the ways the Capitol Theatre is working to prevent COVID-19 from spreading at shows. Attendees are also required to wear masks and have their temperature taken at the door, and encouraged to buy any tickets online at http://capitoltheatretn.com/.

“Not only is physical health affected by the virus, but the side effects of what we have to do to combat it can affect mental health,” Elizabeth Rhea, one of the theater’s managers, said. “Going to see a show can get people’s minds off things and provide a sense of normalcy for a few hours, when you’re not watching the news or scrolling through social media.”

With its latest production wrapped, the Capitol Theatre is shifting focus to its movie screenings and trivia nights until the fall. A “Grease” sing-along scheduled for Thursday is the next event on the schedule.

According to a CDC study published in May, singing may contribute to the spread of COVID-19 due to aerosol emissions. Researchers at LMU University Hospital Munich released a study earlier this month that says surgical masks partially filter those aerosols, and said singers involved in the study were able to transmit them approximately 5 feet.

“Our stage is very far away from our seating, so our singers and actors are definitely spaced out away from our audience,” Rhea said. “It’s not like going to a theater in New York where you could be right up next to the performers. We also have multiple hand sanitizing stations, so the audience can’t even turn their head without being able to see one. We already deep cleaned all the time, but we’re making an effort to be even more conscious of that.”

Encore Theatre Company in Mt. Juliet is also starting its production schedule back up with the same health and safety measures as the Capitol Theatre. “Take Away the Lady,” their latest show, opened on Friday, and they performed “Who’s Afraid of Virgina Woolf?” to live audiences before that.

“People are loving it,” director and Encore board member Donna Willis said. “They like being able to go out and do something like this where they feel safe. It’s like every day you see more and more of things being cancelled, so it’s nice to be able to come out and see a show.”

Before transitioning back into stage shows, Encore also broadcast a radio performance in early June. Willis said the company has done those before and that it was a good way to jump back into performing.

“The main difference with radio shows is that the actors don’t have to memorize their lines, she said. “They have their script in front of them, so we can put one together relatively quickly. Normally we’re working on one production, one set of rehearsals and one set of auditions for three different plays.”

Centerstage Theatre Company, which does not have a dedicated venue, has decided to moe its productions online for the time being. Their first performance since the shutdowns, “Soul of Broadway,” will livestream Aug. 14 on the company’s YouTube channel.

“We’re probably not going back to onstage productions until closer to the end of this year,” Mitchell Vantrease, Centerstage’s cofounder and artistic director, said. “’Soul of Broadway’ is an award-winning production I created while in Arizona, and it’s like a cabaret musical that celebrates African American Broadway shows.”

Online productions are a new step for Centerstage, and attendees will be able to donate during the livestream.

“I think this is going to be the new normal in theater for a while,” Vantrease said. “It definitely doesn’t take anything away from the live theater experience, it just gives some people another option for when they don’t have the opportunity or time to come out and be up close and personal. We’ve seen that with how well Hamilton has done on Disney+.”

Vantrease said COVID-19 has been a challenge economically and hopes the online performance will be successful.

“It’s been a little difficult, but we don’t have as much overhead because we don’t have a dedicated building,” he said. “We’re coming up with creative ways to make sure we can sustain ourselves over the next six months or so, and we’re starting up a T-shirt fundraiser next week.”

Willis said that without a grant from the Wilson County government, Encore would not have been able to pay its last three months of rent.

“We’re a 501©(3), so if we don’t sell tickets we don’t have money,” she said. “The radio show was attended about as well as could be expected, and ‘Who’s Afraid of Virginia Woolf?’ has a lot of adult themes that our season ticket holders weren’t necessarily comfortable with. We always let them know ahead of time if we’re going to do a show like that.”

The Capitol Theatre has seen revenue losses mainly because of reduced seating capacity, but they have recovered some of the costs by renting out the venue for private events.

“It felt pretty good to open back up, but it was also nerve-wracking because we didn’t know how the community would respond at first,” Piercey said, adding that she appreciated the support from attendees. “That’s what it’s all about. Bob and Pam Black opened this up for the community to have a place that’s family-friendly to enjoy a movie or Broadway show without going to Nashville.”