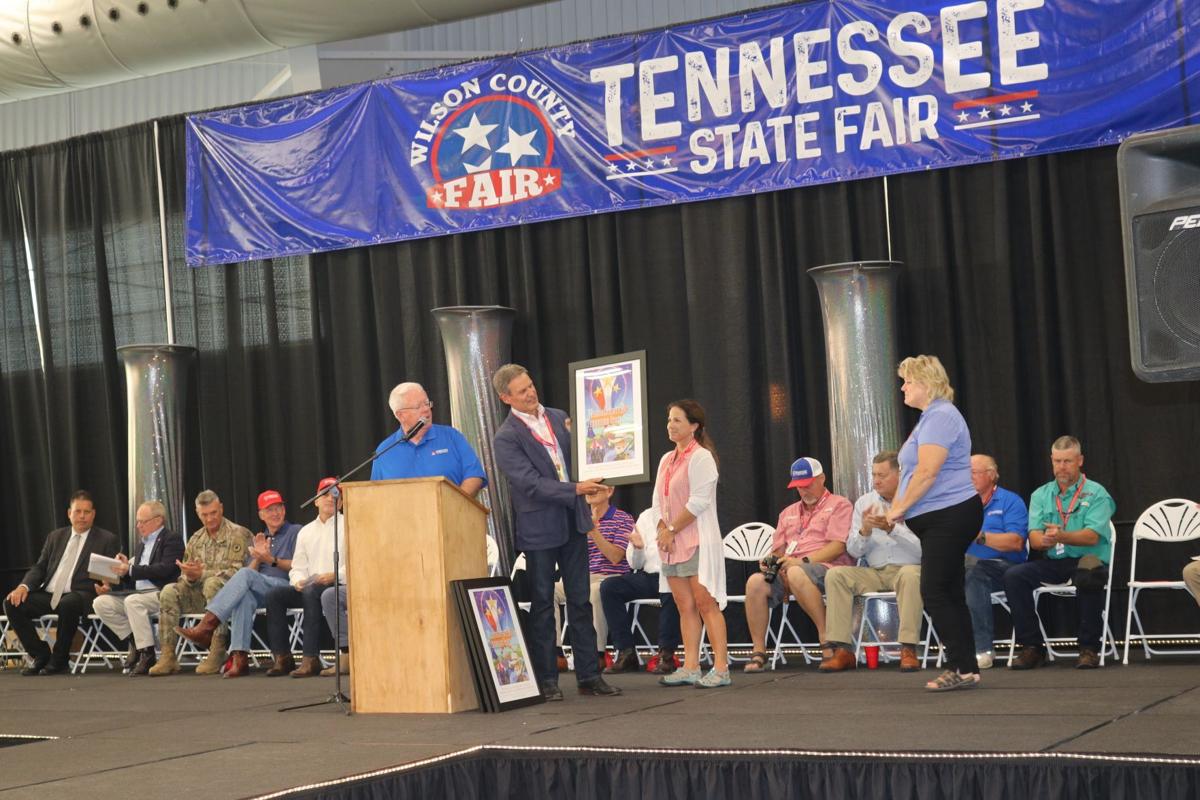 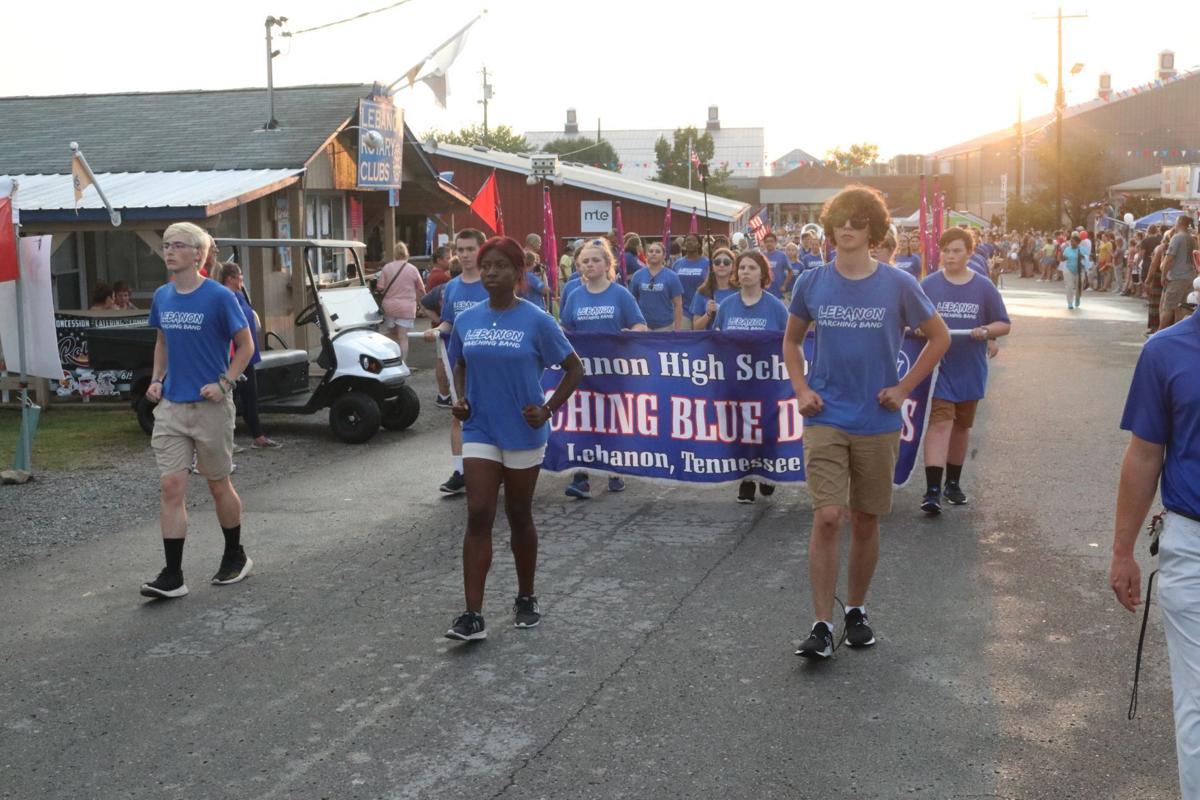 Members of the Lebanon Blue Devils Marching Band participate in the parade Thursday during the opening ceremony of the Wilson County Fair — Tennessee State Fair. 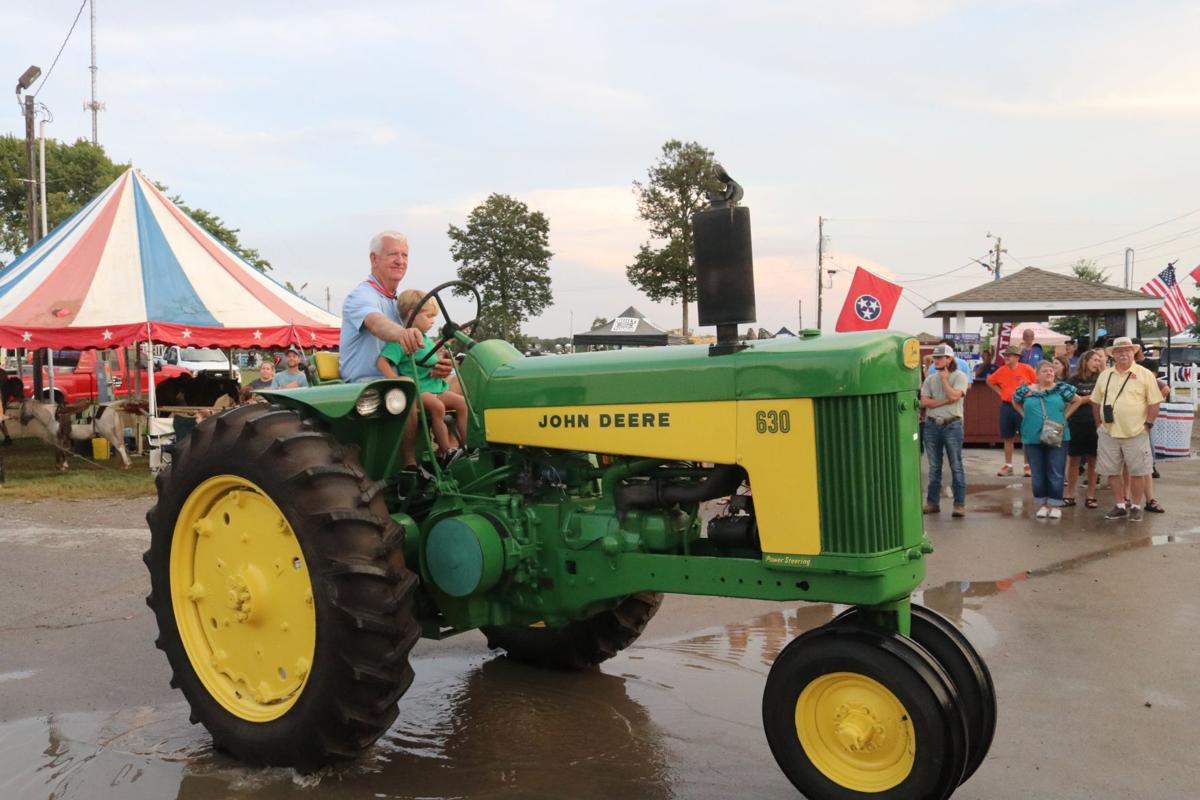 Ricky Haskins and his grandson Hudson Haskins join in the fun during the parade atop of one of Haskins’ antique John Deere tractors on Thursday’s opening night of the Wilson County Fair — Tennessee State Fair. Haskins has a large collection of John Deere tractors that are on display at the fair.

Members of the Lebanon Blue Devils Marching Band participate in the parade Thursday during the opening ceremony of the Wilson County Fair — Tennessee State Fair.

Ricky Haskins and his grandson Hudson Haskins join in the fun during the parade atop of one of Haskins’ antique John Deere tractors on Thursday’s opening night of the Wilson County Fair — Tennessee State Fair. Haskins has a large collection of John Deere tractors that are on display at the fair.

The Wilson County Fair — Tennessee State Fair is fully underway following opening ceremonies Thursday, and had over 20,000 visitors attending. With a full slate of upcoming shows, events, tents, and vendors, the 2021 version promises to be a fun time, but seeds were also sown that night for future fairs to come.

Ground was broken on the Made in Tennessee Building to be completed by next year, and another groundbreaking for an Agricultural Learning Center is scheduled for Wednesday.

These developments harken to what Gov. Bill Lee said in his keynote speech about how the fair showcased, “America at its best, when we put our divisiveness aside.”

With the new Made in Tennessee Building, “best in show” recipients from county fairs around the state will be able to bring in their wares to “showcase everything we find great about our state,” Lee said.

Randall Clemons, president of Wilson County Promotions and the Wilson County Fair, said that it’s about showing what all the counties in Tennessee have to offer, “no matter what assets they may specialize in.”

“Every county in our state has a Farm Bureau office, and every county has an Ag Extension office,” said Clemons, who added that he hopes by working through these agencies and other county fairs the building will be a success. “We are on a journey for the next 12 months to take it where we envision it in 2022. It will be the greatest educational tool to teach our children as we go forward.”

Acknowledging agriculture as a driving component of the state’s economic sector, Clemons added, “We need to continue to invest in our young people in agriculture.”

Vanatta said she thought it was a great way to kick start the fair.

“I am very appreciative that the governor was there to discuss the idea of bringing the state fair to Wilson County,” she said. “The parade was great and it was an awesome opening night.”

Leading the audience in the opening prayer was Hutto. He thanked the farmers and leaders of Tennessee for their contributions that make the fair possible, and encouraged those attending to “celebrate this week in Wilson County,” and “make many memories.”

When Lee spoke, he reminisced fondly of his youthful years backstage at fairs. He said he started showing calves in the fourth grade and added, “All my life I have loved the state fair. I’ve spent many a night in the cattle barns preparing calves for the state fair.”

The governor said, “My love for and appreciation (of fairs) is the thrill of it for me. Tonight is a night for our state’s history books, and celebrating the opening of this state fair is something that means a lot to me.”

Lee also recognized Tennessee’s 225 years of statehood. “We’re celebrating that with the theme, untold Tennessee, and asking people to submit stories of the regular everyday Tennesseans who make this state great.”

“It’s fitting that this year’s theme is honoring hometown heroes. It fits right in with untold stories.”

Two pageants were held Thursday that drew steep competition from around Wilson County. Ultimately, the 2021 Fairest of the Fair of the Wilson County Fair — Tennessee State Fair was Reed Steplowski.

Steplowski will now go on to represent Wilson County at the Tennessee Association of Fairs state competition in January.

Thursday was the first time that the fair had opened on that day, with the Wilson County Fair historically opening on Fridays. Despite that slight change and a heavy downpour right at the time the gates opened, Clemons said attendance totaled over 20,000 people. With it being the state fair now, and many more guests coming from farther away, Lebanon hotels were experiencing at or near-capacity situations.

Front desk reception at La Quinta Inn in Lebanon said that there were no available rooms Friday night, and added that several of the guests with reservations over the next week had expressly stated intentions of coming to town to visit the fair.

One reservationist at the Holiday Inn Express in Lebanon said they had very few rooms remaining. The front desk at the Ramada by Wyndham said the same thing about room availability, adding that several vendors for the fair were staying there in addition to numerous others, even from out of state.

Traffic updateAccording to a release from the Tennessee Department of Transportation, the right lane at mile marker 239 on Interstate 40 will be closed tonight as well as next Friday and Saturday from 7 p.m.-2 a.m. so traffic from the fair can safely enter the highway.

The fair runs through Aug. 21. For information on schedules, tickets, parking and more, go to wilson countyfair.net.