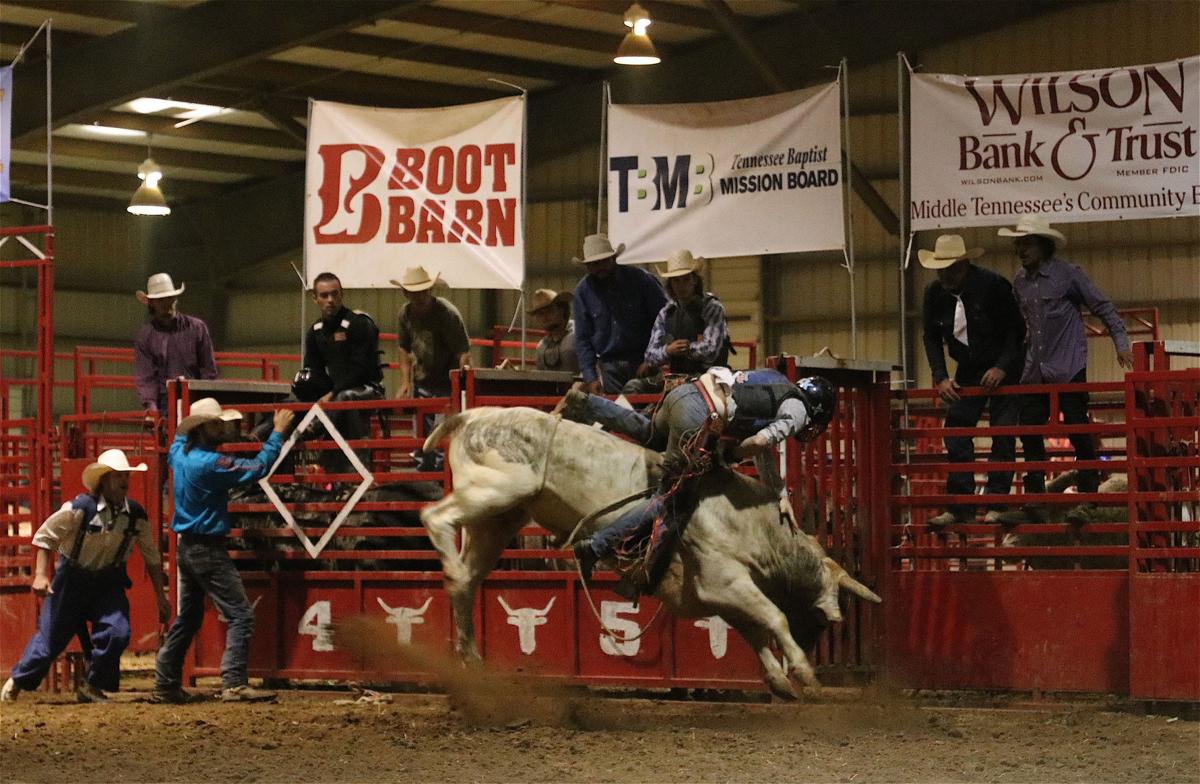 Hunter Crocker holds on tight during the bull riding competition at the 3rd Annual FCA Rodeo, held Friday and Saturday at the Wilson County Fairgrounds. 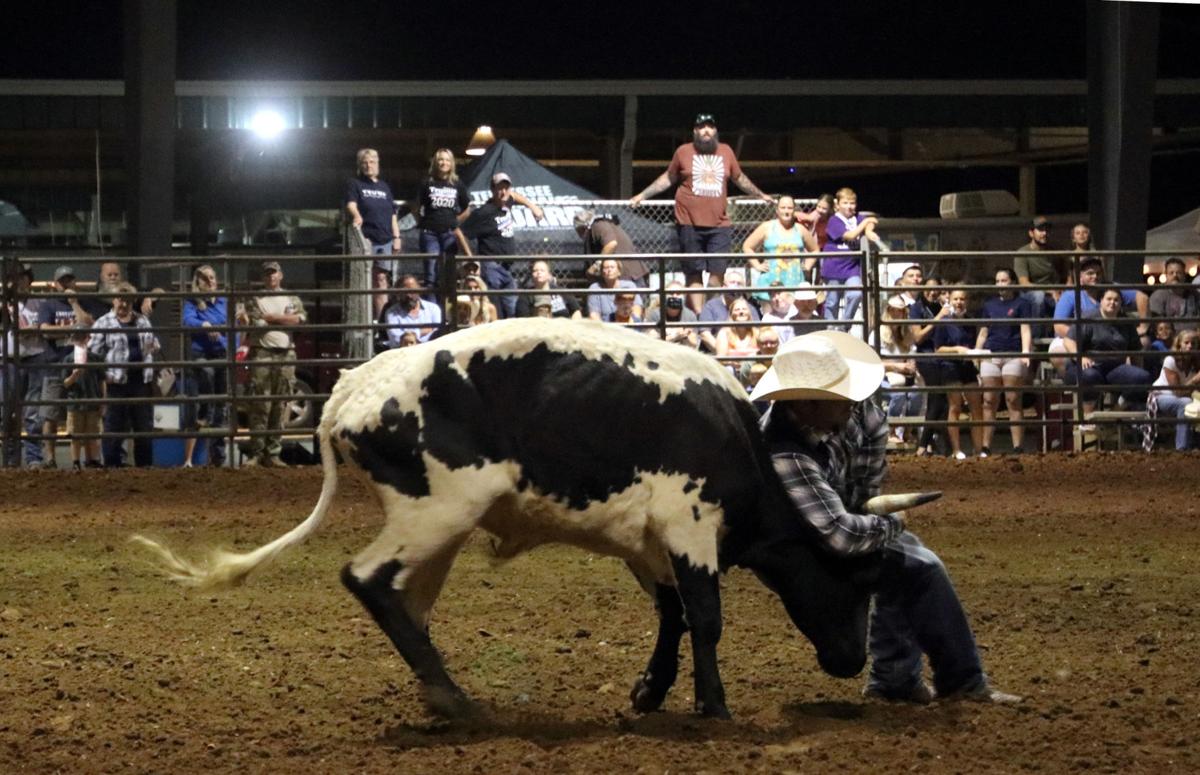 Seth McDaniel wrestles a steer to the ground during the 3rd Annual FCA Rodeo. 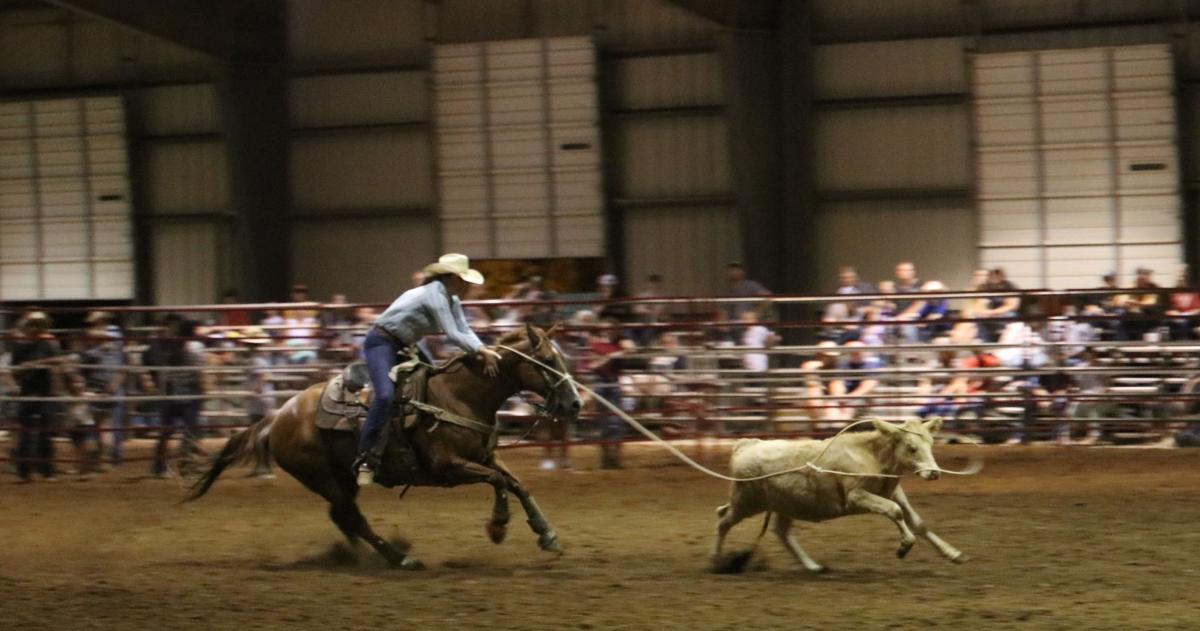 Hunter Crocker holds on tight during the bull riding competition at the 3rd Annual FCA Rodeo, held Friday and Saturday at the Wilson County Fairgrounds.

Seth McDaniel wrestles a steer to the ground during the 3rd Annual FCA Rodeo.

Competitors from across the country squared off with some of the toughest bulls and steers in the business at the 3rd Annual Fellowship of Christian Athletes Rodeo, held Friday and Saturday on the Wilson County Fairgrounds.

The event is likely to bring in thousands of dollars for FCA, but a total is unavailable at press time. Ed Barber of Mending Fences Cowboy Church, which organizes the rodeo, said it was their largest turnout to date and that a dollar estimate could solidify on Tuesday.

“We’re really appreciative of our partnership with the local churches in Wilson County, and just the faithfulness of people in our county as well,” Wilson County FCA Area Director Tim Bryant said. “I’m also really appreciative of Ed Barber and the Mending Fences Cowboy Church. In today’s time with the conflicts and social unrest, and everything with Black and White, it’s just refreshing for us to be able to reach across the aisle with each other.”

FCA has a presence in 24 schools across Wilson County and provides a variety of sports and leadership camps for students. Proceeds from fundraisers like the rodeo and its two annual banquets help with scholarship assistance for those programs.

According to Bryant, FCA receives 60% of the revenue from the rodeo and uses the money for both day-to-day operations and scholarships. The remaining 40% covers costs associated with holding the event, which is officially sanctioned by the International Professional Rodeo Association.

“Our schools are very active in our summer camps, and again at those camps the focus is to build the mind, body and spirit,” Bryant said. “Each day there’s competition, and each evening there’s a time of chapel which lasts roughly an hour in which different speakers come in. There’s singing and skits, and students are allowed to have a part in it as well, so it’s really a lot of team bonding.”

FCA also offers scholarships for its leadership camps, which are individual experiences meant to build skills and offer networking opportunities.

“At the end of the day, if a kid goes to sports camp with FCA and can’t afford it, there are scholarships so you can go for free,” Barber said. “The way I always put it, for every $200 we raise we send a kid to sports camp. The bottom line is that no kid gets turned away.”

Student volunteers helped out with the program as well, checking temperatures to prevent COVID-19 from spreading at the event. Masks were encouraged but not required, and hand-sanitizing stations were spread throughout the fairgrounds.

“We meet every Friday morning to learn God’s word and fellowship,” Mt. Juliet Christian Academy student and event volunteer Jessica Whicker said. “I’m just glad that we’re able to be there, and it’s given me a chance to grow my relationship with my peers.”

Those weekly meetings are known as huddles to FCA members and take place at every school the program works with. Students are encouraged to lead the huddles themselves and drive the conversation.

“That way they’re fed spiritually once a week, and a lot of the kids in the schools don’t attend church,” Bryant said. “A lot of times, that’s the only church or spiritual guidance, so to speak, that many of them receive.”

Barber said the rodeo’s first year raised money for Sumner County, but the change in focus to Wilson County allows it to directly benefit area students. The rodeo has also grown from year to year and has attracted several high-ranking competitors.

“This is our first time here, and I love the atmosphere,” barrel racer Rhiannon Snow, who traveled from North Carolina, said. “We just got really started up with events on the first of May, and there’s been a lot of down periods. It’s really good that things are starting back up again, because there’s a lot of us that aren’t used to staying home all the time.”

Snow and her friend Jordan Lacks, another barrel racer from Virginia, found out about the event through IPRA listings online. The event challenges riders to run a cloverleaf pattern around a set of barrels, and winners are often decided by a fraction of a second.

“My favorite part about it just going fast,” Lacks said. “And it’s great to be able to do that again.”

Barber said Hedrick Rodeo Company’s co-sponsorship of the event is another plus for competitors, who are looking to gain IPRA standing.

“These guys are competing for points and money to move onto nationals,” Barber said. “Competitors are coming from all over the country, and in previous years we’ve had people from Canada, California and more.”

From cattle roping and steer wrestling to barrel racing and bull riding, the rodeo allowed entrants to showcase many different skills — and impressed attendees could be seen with cameras and cell phones throughout the stands.

“Social distancing in a situation like that was difficult, but we were set up so that as people were walking around or standing at the booths and vendors they were being cautious,” Barber said. “We did the best we could. Not one person came through the front or back that didn’t get a temperature check, and I never got a report that anybody had 100.4 or higher.”

Mending Fences Cowboy Church expects the rodeo to continue growing, which will help FCA meet its own increased budget needs.

“Food is a big part of fun and ministry, and it takes money to provide pizza, refreshments and different things,” Bryant said. “A lot of times I’ll stop and buy stuff for office staffs at schools, provide goodies for coaching staffs, Gatorade for various teams and Bibles for athletes. The cost quickly mounts up.”

Wilson County FCA started with a $25,000 seed from Nashville’s branch, and it was released as an independent site two years ago. Today, its projected budget is $185,000, and the rodeo will play a part in covering that cost.

“We were told by the contractor when we started that anybody that knows rodeos, if you break even your first year you have a successful rodeo,” Barber said. “And we made money our first year. Last year it was better, and this year just looking at the crowd I know it was the best by far of three years. I hope it will set the trend that if people didn’t know about the FCA Rodeo that Mending Fences puts out, they will now.”