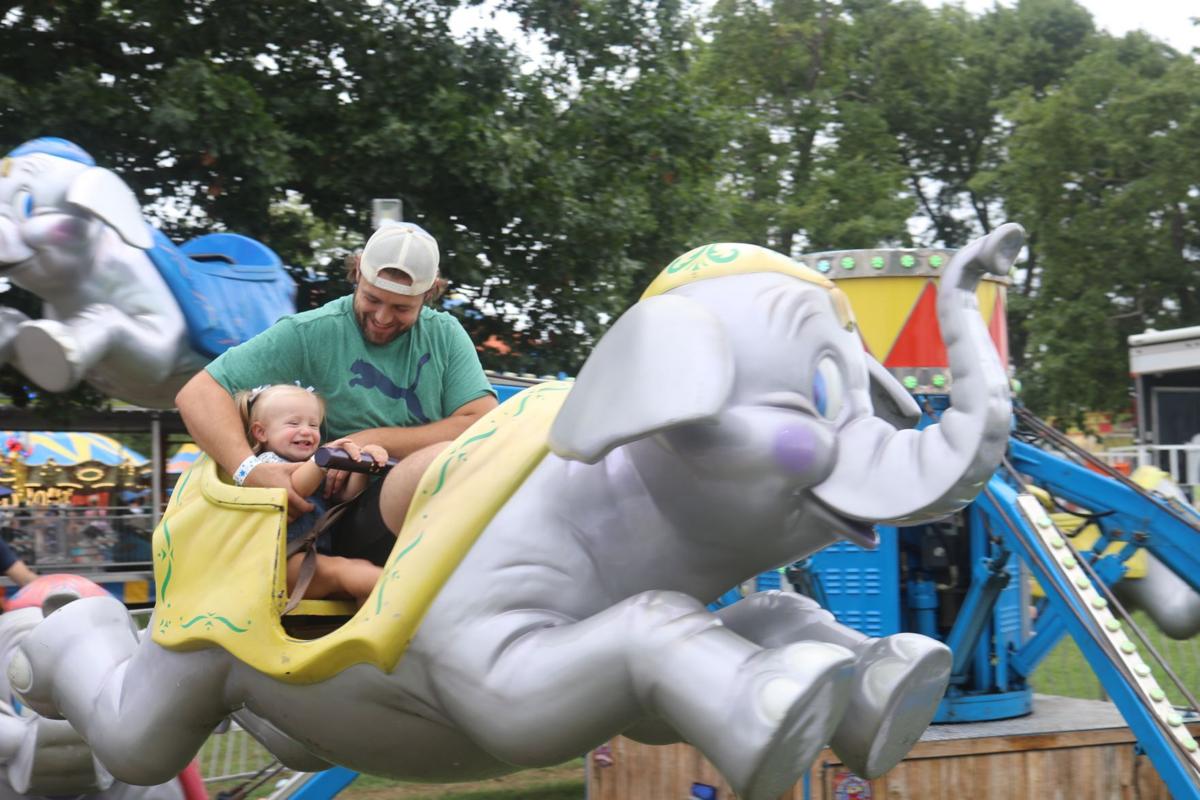 Remington Tyler, of Lebanon, holds his daughter Oaklyn on the Jumping Jumbos at the Wilson County Fair — Tennessee State Fair on Saturday, the last day of the event. 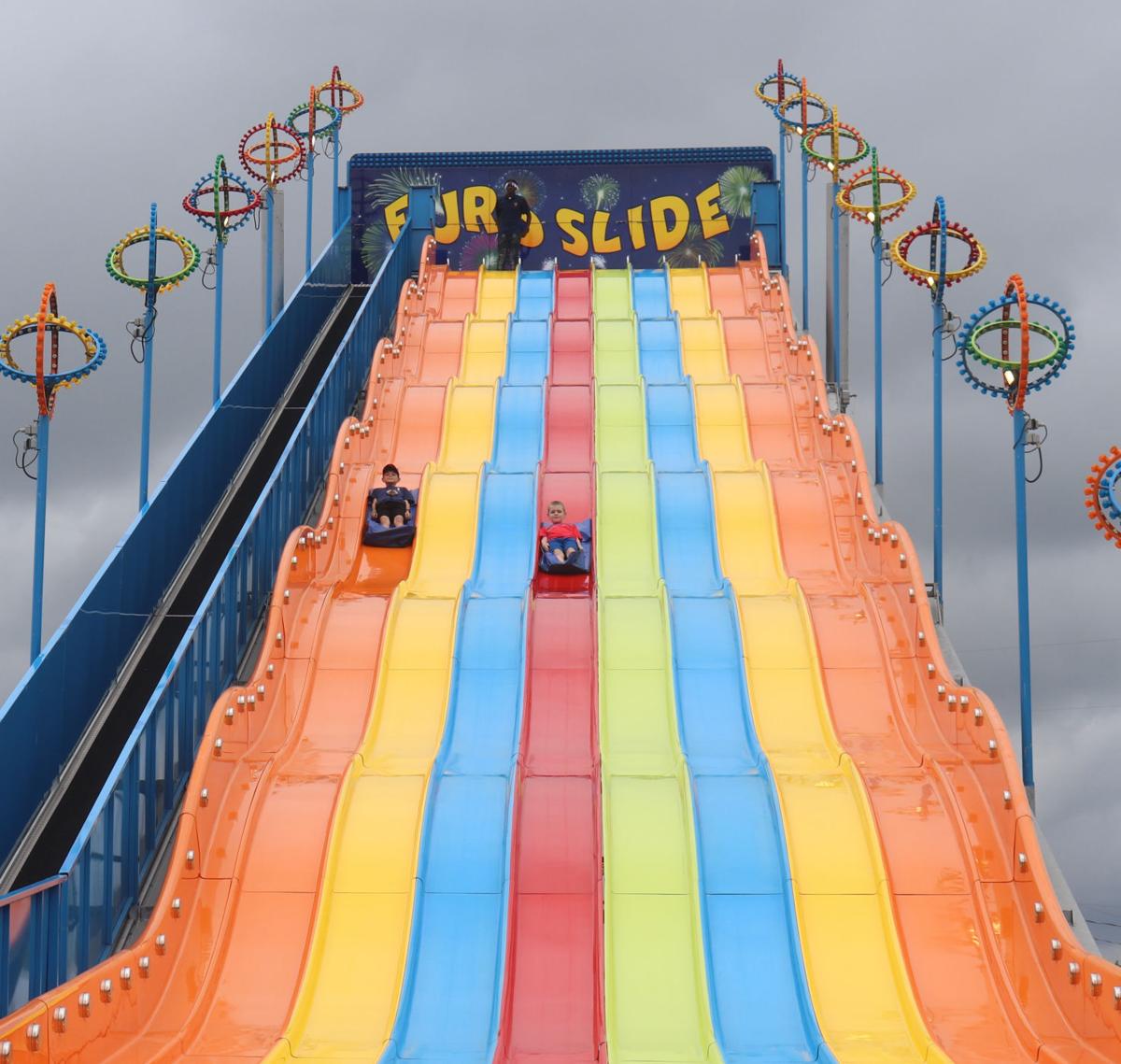 Levi Pulley, left and his brother Seth Pulley, of Watertown race down the Euro Slide ride Saturday at the fair. Levi got off to a slow start but pulled away from his brother to win the race to the bottom.

Remington Tyler, of Lebanon, holds his daughter Oaklyn on the Jumping Jumbos at the Wilson County Fair — Tennessee State Fair on Saturday, the last day of the event.

Levi Pulley, left and his brother Seth Pulley, of Watertown race down the Euro Slide ride Saturday at the fair. Levi got off to a slow start but pulled away from his brother to win the race to the bottom.

The first installment of the Wilson County Fair — Tennessee State Fair is officially in the books, and representatives from the organization say they were extremely pleased with how it went.

He also called it, “One of the smoothest operating fairs we have ever done.”

Wilson County Promotions Executive Director Helen McPeak reported that the fair’s 10-day total attendance was 480,000 people. “We feel very blessed to have had so many people come out,” she said on Monday.

“We had rain every single day,” she said, but that didn’t stop people from coming out in droves. “I’ve always said the weather can make or break you, but we still feel like it was a very good fair.”

The vice president of Wilson County Promotions, Jimmy Comer, said, “We did have to tweak a couple of the events because of the rain, but were still largely able to hold most everything scheduled. When we opened the 10-day forecast, there was a 40% chance of rain every day,” Comer said, “So our numbers were down from two years ago.”

That turnout was slightly lower than in 2019, when the fair boasted a staggering 587,000 attendees. McPeak attributed that decline to surrounding scenarios that weren’t present in 2019, namely COVID and the negative weather forecast.

All the same, McPeak said, “It is wonderful to see everything come together, all the volunteers who are so passionate about throwing this fair. I can’t thank the first responders, sheriff’s deputies, Lebanon Police Department, Wilson County Emergency Management Agency and everyone behind the scene who made it work.”

Clemons said, “Our volunteers did a tremendous job with all the obstacles. That’s what makes our fair different from other fairs, is the volunteers, their work and passion in their particular areas.”

McPeak said that she was grateful for the injection of the state fair’s resources pertaining to putting on the statewide events, and added, “We are already gearing up and making plans for 2022.”

Speaking on the new improvements for future fairs, Clemons said, “We broke ground on our two new buildings, the Made in Tennessee Building, and our new learning center. Through next year we are going to be working to make this the largest classroom in the state.”

As the fair’s workforce is largely made up of volunteers, McPeak said their compensation comes in the form of the smiling faces on the crowds in attendance. “That’s what it’s all about, making memories.”

Although she was running around conducting her role as one of the lead organizers, it didn’t stop McPeak from taking in some of the fair for herself.

Spending time with her grandchildren and forging memories with them was what she said meant the most to her, but she added, “I enjoyed my fried green tomatoes, my Tennessee burger from Burger Republic and of course my ice cream from Shop Springs Creamery.”

The fair seemed to have a strong economic impact on the county as well. Clemons said, “Our hotels and motels were full every night, so we brought in a lot of tourists. All our state events we did all went well and we got a lot of compliments from people that hadn’t been there before.”

Clemons added that they are taking suggestions from the army of volunteers who helped out this year. “There is always room to improve. We’re just excited about what we got going on and what we are going to be able to do in the future.”