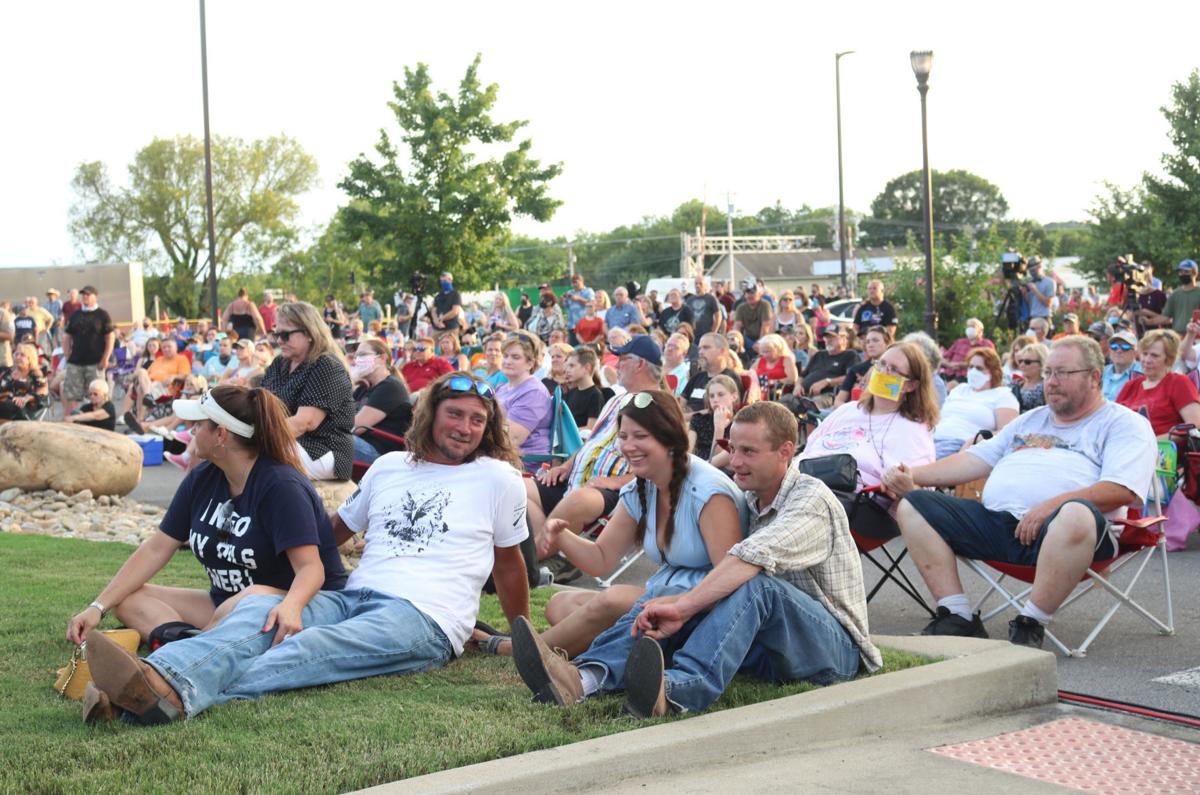 Hundreds gathered at Sellars Funeral Home in Mt. Juliet on July 8 for a public memorial service honoring Charlie Daniels, who passed away from a stroke earlier this week. 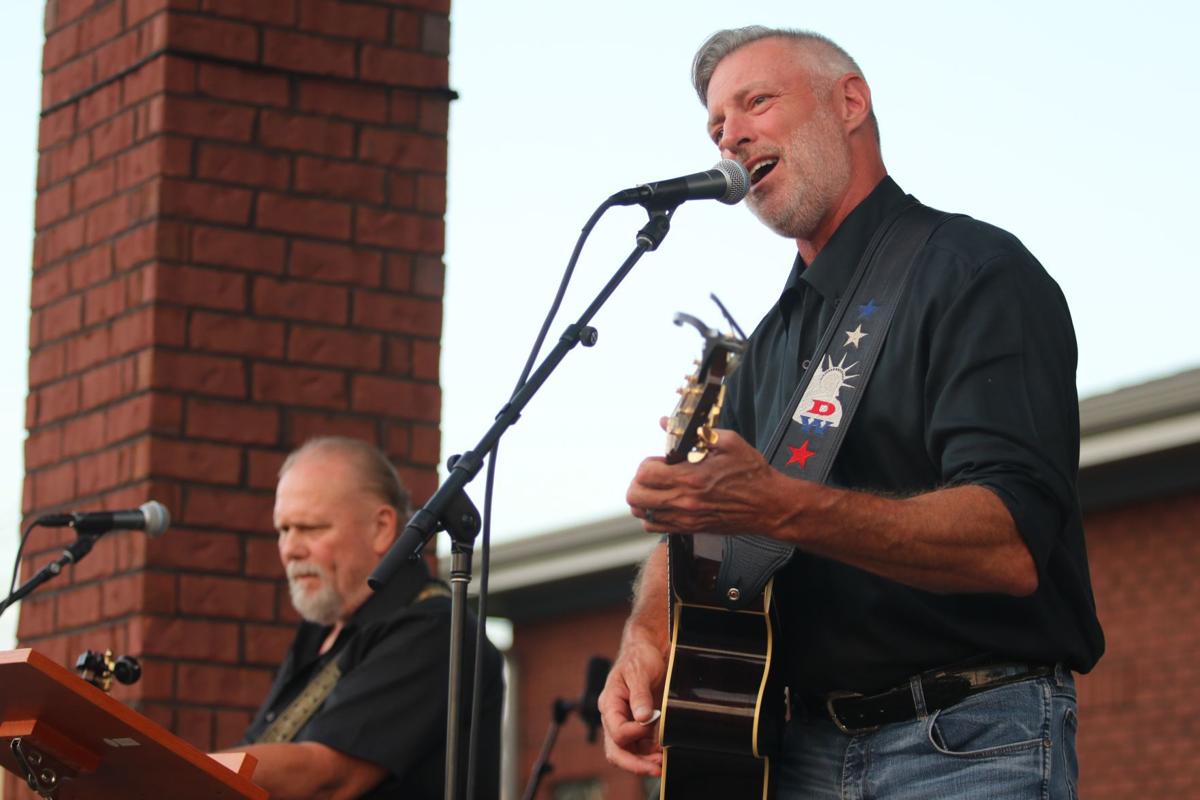 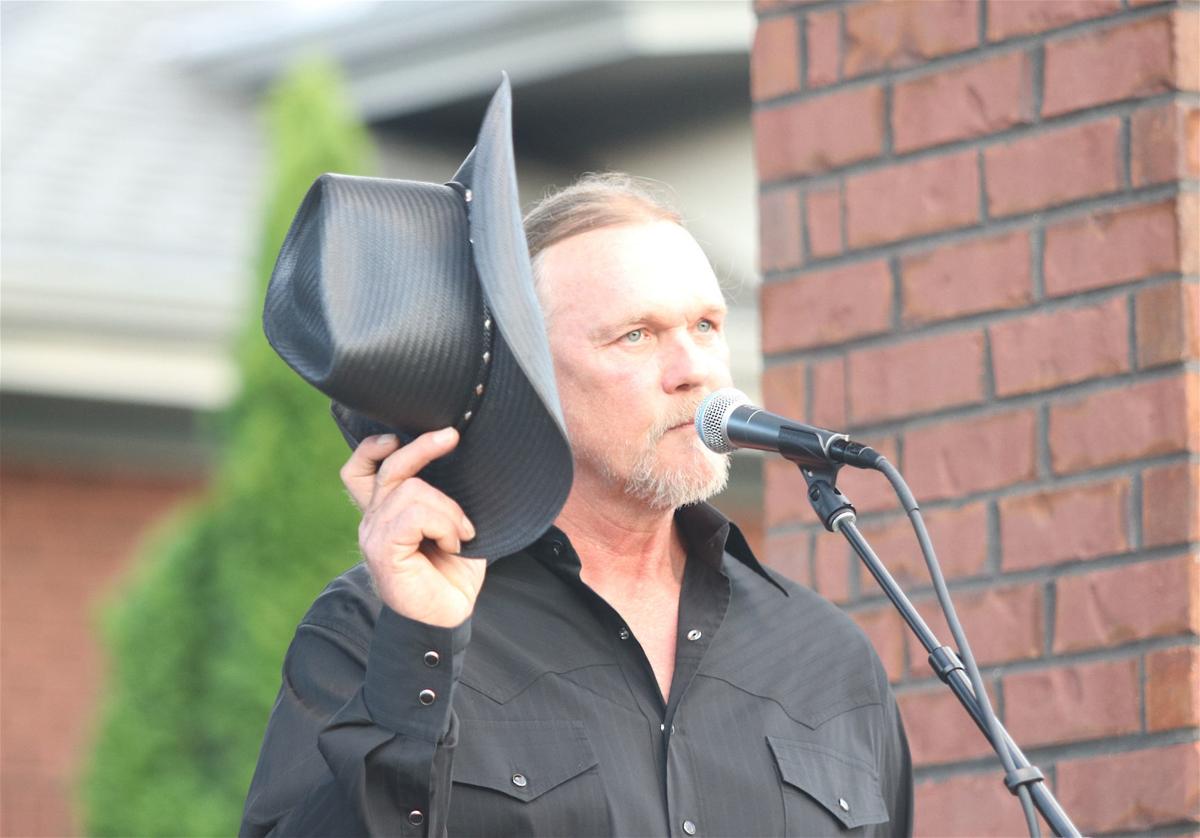 Country singer Trace Adkins removes his hat in a salute to Charlie Daniels after performing his 2005 single "Arlington." 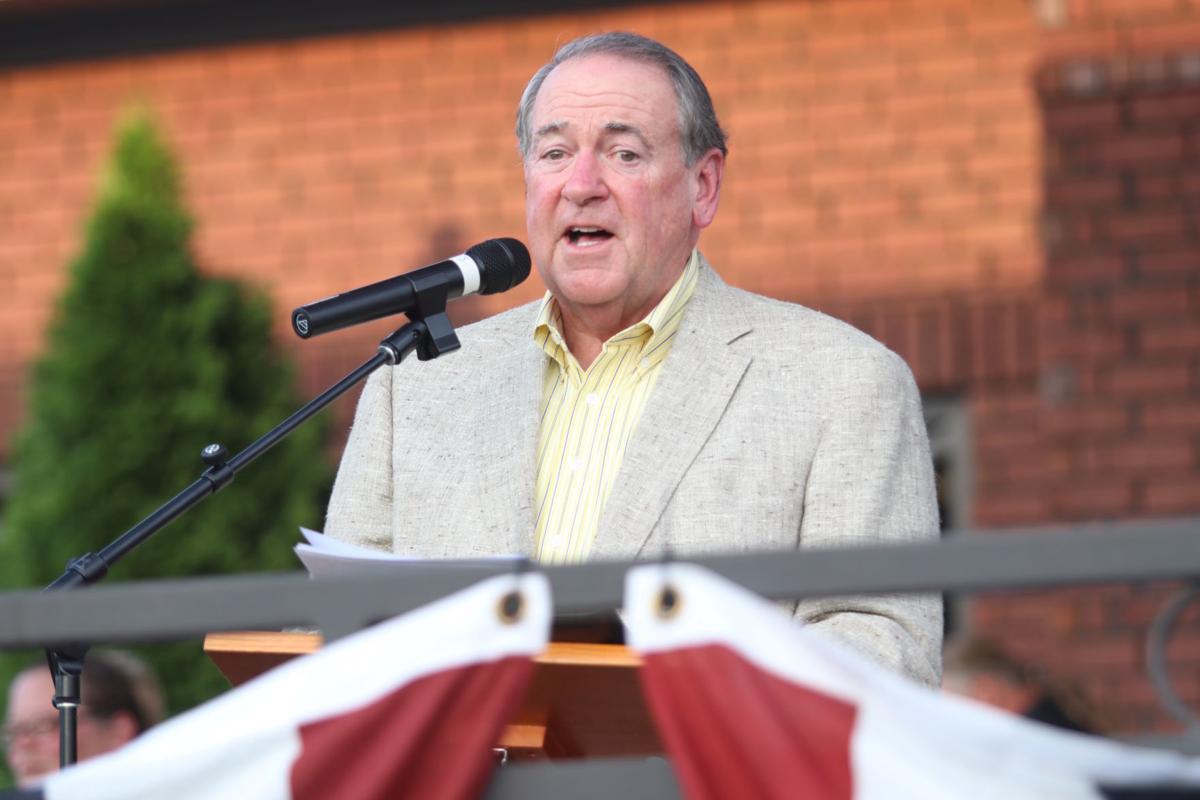 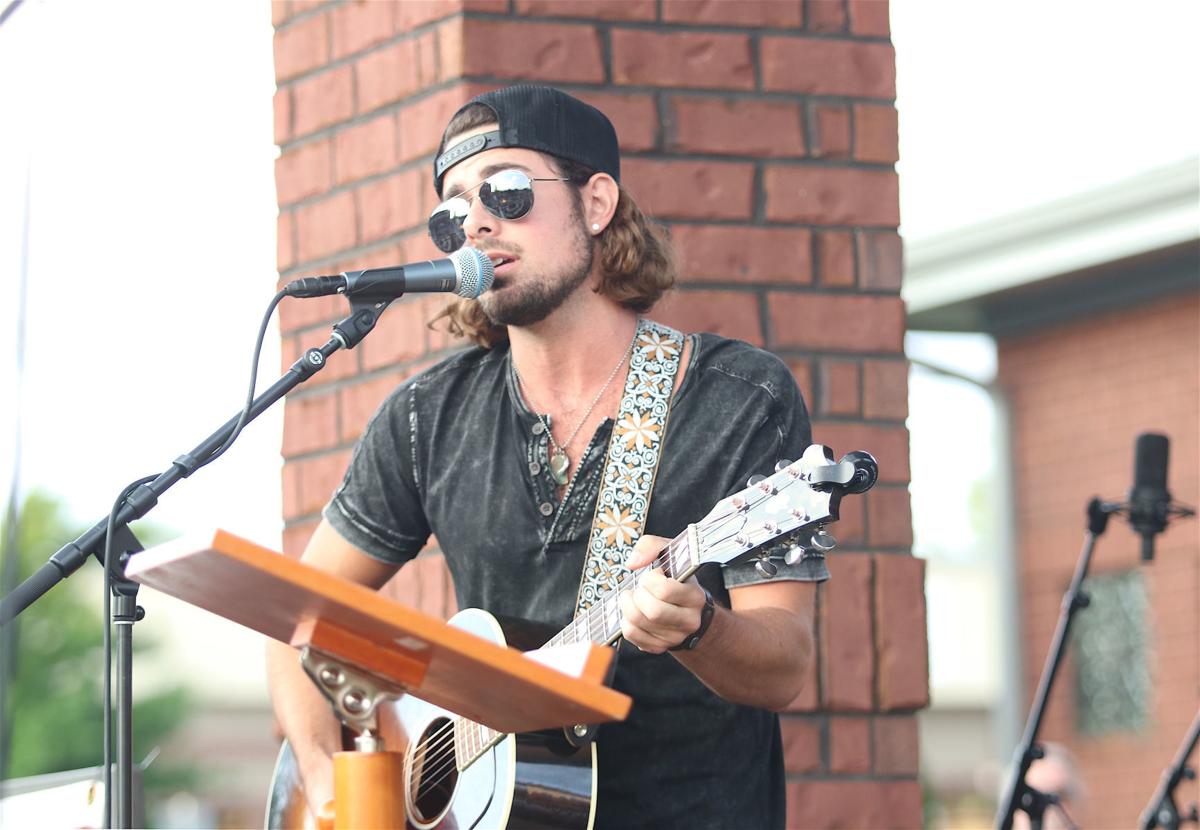 Hundreds gathered at Sellars Funeral Home in Mt. Juliet on July 8 for a public memorial service honoring Charlie Daniels, who passed away from a stroke earlier this week.

Country singer Trace Adkins removes his hat in a salute to Charlie Daniels after performing his 2005 single "Arlington."

Charlie Daniels was a source of pride and unity for many in Mt. Juliet over the years, and he brought the community together one last time on Wednesday, even in death.

Hundreds gathered at Sellars Funeral Home for a public memorial to the singer, who died of a stroke at 83 on Monday. The event included a military flyover, 21-gun salute and several musical performances.

Lebanon native Kason Lester, known for his top 40 finish on “American Idol,” shared a story of how Daniels helped him overcome the pressures of that moment.

“I was basically just laid out on the bed, just getting fear and doubt kind of creeping in on me,” Lester recalled. “In that moment, almost the exact moment of fear, my phone rang and it was Charlie Daniels. He said, ‘son, we’re proud of you, we’re thinking of you, and I want to say a prayer with you if that’s alright.’ ”

Daniels was known for mentoring younger musicians, and had even shared the stage with Lester before his death. His words of encouragement helped the young singer work up to a Hollywood performance.

“At the end of that call, he said, ‘son,’ — that’s what he always says — ‘you go out there and just show ‘em how a Wilson County boy does it,’ ” Lester said. “You talk about a confidence booster.”

Another musician Daniels impacted was Tracy Lawrence, who moved to the Nashville area years ago to start his country music career and now calls Mt. Juliet home. He met Daniels in 1991 before ever releasing an album.

“Charlie sat down and was just as gracious to me and talked to me like he’d known me forever, and that relationship never changed,” he said. “In all the time that I’ve known him, there’s never been anything that I’ve ever asked for, if he could bend over backwards and help me he would.”

Daniels also built friendships with veterans and politicians across the country while advocating for service members. He often used his social media platforms to raise awareness of veterans’ suicide rates, and chaired The Journey Home Project to raise money for rehabilitation services.

“Because America gave so much to him, Charlie gave back even more,” former Arkansas Gov. Mike Huckabee said during a speech at the memorial. “He has raised millions and millions of dollars for our veterans and military families … he will never play again to an empty seat. He’s going to fill Heaven’s stadiums with his unique sound and soul.”

Rep. John Rose said Daniels’ music touched the lives of many in the community and brought people together, and he played an audio message from President Donald Trump commemorating Daniels.

“During a time when it seems like people are doing anything but coming together … maybe God took Charlie now because he had one last act to perform on this earth,” Rose said. “And that act could be one of his greatest yet. Right now our country could learn a thing or two from Charlie Daniels. I hope his passing will draw attention to these lessons.”

The audience also heard performances and stories from country stars Trace Adkins and Darryl Worley, both personal friends of Daniels.

“There’s a hole in the fabric of this country, and Charlie Daniels left that hole,” Adkins said. “There were a couple times when I was at a crossroads of indecision, I had no idea what to do. When I finally came to my wit’s end, I surrendered to the phone and called Charlie. He would always listen, like somebody that loves you and cares about you listens to you … then he would give me advice, and his advice was always grounded in integrity and seeped in wisdom — but it was tempered with humility, and only great men know how to do that.”

Adkins said he felt like a better man for the times he spent with Daniels, and recalled a time he was writing a book that touched on political issues.

“I kind of laid my soul bare in this book, and I talked about my political views,” he said. “I knew that it was going to be dangerous, so I called Charlie. I said, ‘Charlie, this book’s coming out and I said some things some people may read this book, and they may not like me after that.’ He said, ‘son, let me tell you something. The people that ain’t gonna like you because of what you put in that book, they don’t like you now.’ I wasn’t worried about it after that, not at all.”

Worley had a similar relationship with Daniels, who he considered a close friend and frequent source of advice.

“Somehow you knew that he was the guy, if you got in a situation and you wanted to ask somebody’s opinion … he was fine with you picking up the phone and calling him,” Worley said. “And sometimes, if he saw you somewhere — maybe you didn’t know he even saw you — and you weren’t behaving like you should have been, he might call you too.”

Worley said he was inspired by Daniels’ efforts to keep him “on the straight and narrow,” but even more influenced by his Christian faith.

“My dad and Charlie Daniels are the two men in my lifetime that I watched struggle with every fiber inside of them to be the very best man of God that they could be,” he said. “So what I learned from Charlie about it was that you have to be bold … he was most bold in his faith.”

Recalling a conversation with Daniels, Worley said he was afraid of people judging him for his lifestyle when he spoke about Christianity.

“He said, ‘God uses broken people, messed up people, to bring sheep into the fold,’ ” Worley said. “He said, ‘you might be able to go out there and talk to somebody that these other people that think they’re so pure and pristine — you’re just a little scared. You just need to step up and be bold … the more you stand up for Jesus, the more he’s going to affect your life and you won’t even have to worry about the things you’re worried about now.’ ”

In lieu of flowers, community members are asked to donate to The Journey Home project online at www.thejourneyhomeproject.org or by mail to 17060 Central Pike, Lebanon, TN 37090. Floral arrangements may be sent to Sellars Funeral Home at Mt. Juliet.