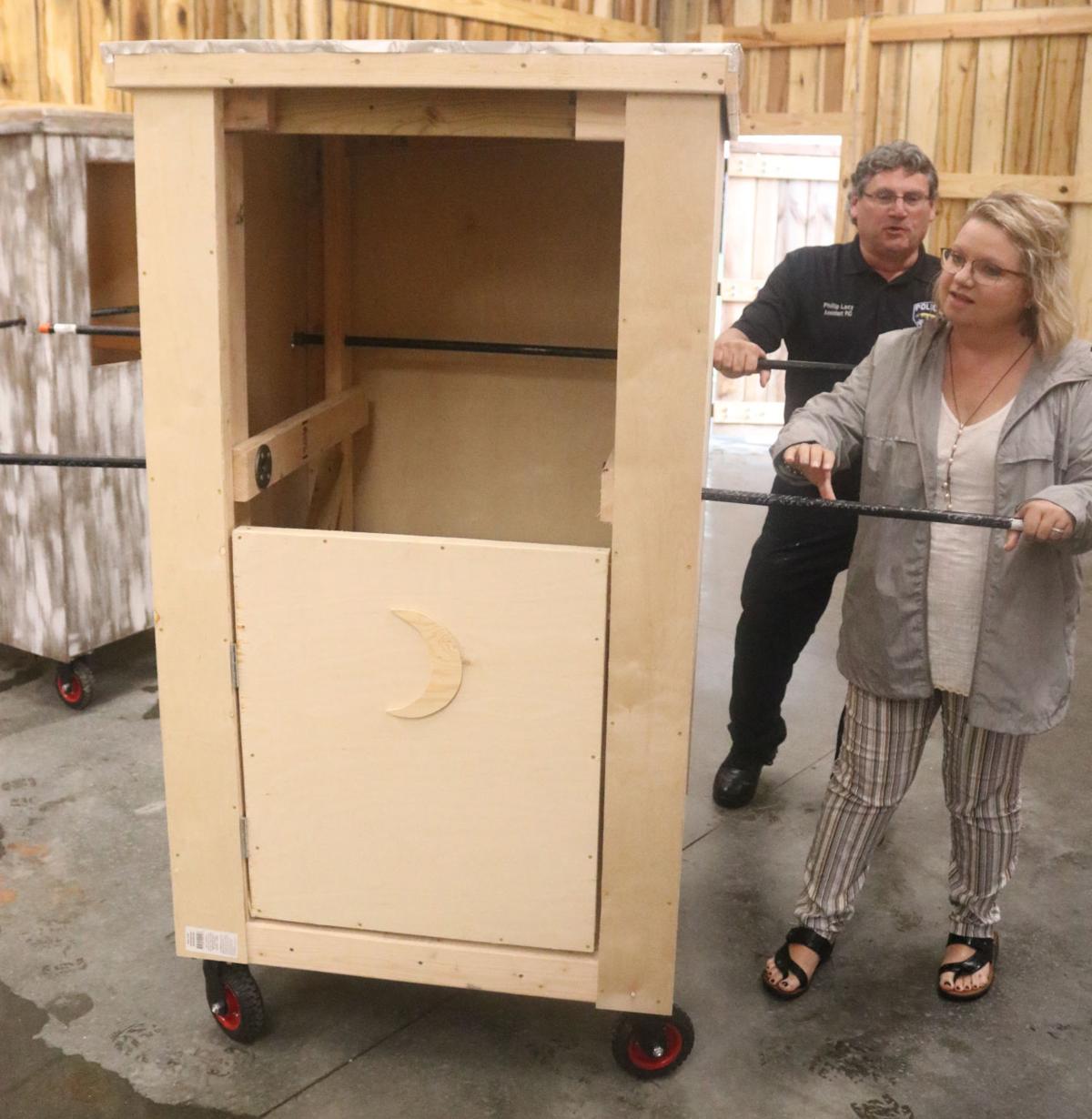 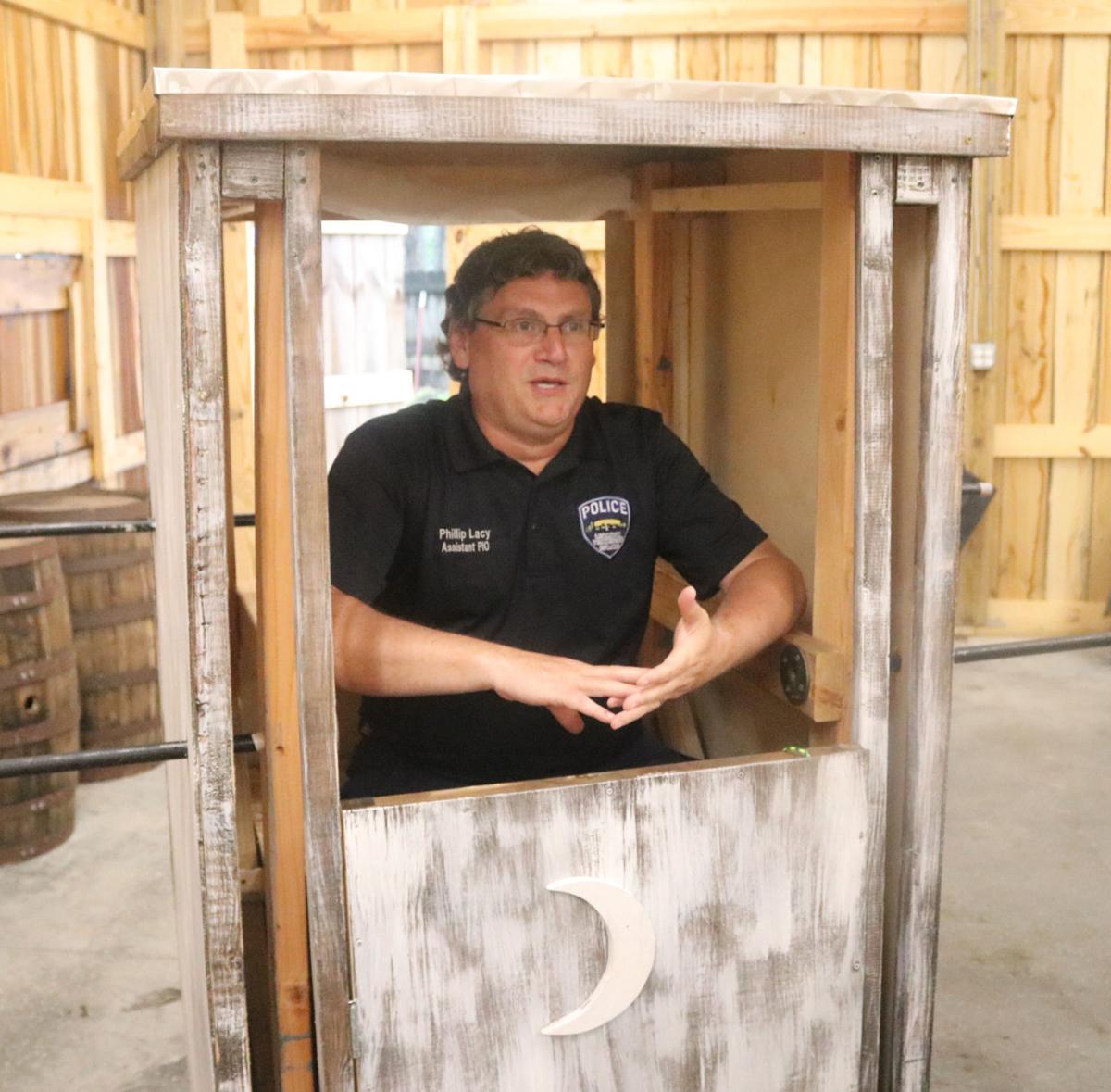 Lacy shows where the rider sits while the running portion of the race is taking place.

Lacy shows where the rider sits while the running portion of the race is taking place.

Fiddlers Grove Historic Village draws people to Lebanon because of its treasured ability to teleport them back to a simpler time.

Last year’s Neddy Jacobs Heritage Day was canceled due to COVID, but Fiddlers Grove is ready to pick things back up where it left off and with a new addition to the annual day that celebrates the area’s first settler.

Typically, the event will walk visitors through a lost age, where everything was crafted by hand. While all that will still be on the menu, some local law enforcement officials put their heads together and crafted an idea for a race unlike any run in Lebanon before — an outhouse race.

Lebanon Police Department’s assistant public information officer, Phillip Lacy, said that it’s hard to know who exactly to give credit to for the idea. Lacy said they’ve been doing something like this in Iowa for about 10 years now, but that an event in Nevada may hold the oldest claim. All the same, Lacy hopes to inject some of Wilson County into the concept and make it their own.

The outhouse race is sort of what it sounds like. Kenny Birdwell, whose wife, Rhonda, is a committee member on the junior fair board, constructed the outhouses to look like normal outhouses. Then, he affixed four wheels onto each one. Hand poles extend from each side of the outhouse that will be used to push the cart.

The carts will then be raced 150 feet, down and back again from the front gate Fiddlers Grove by the veteran’s building.

Lacy explained that running the course won’t be the only facet of the race. Once each team gets to the other side, the person sitting inside the outhouse, or rider, will hop out and complete a series of tasks. These tasks will include a toilet paper toss and an activity akin to finding a needle in the haystack. Upon completion, the rider gets back in and the team returns to the starting line.

Organizers hope the event catches on and becomes part of Wilson County Fair that takes place in August. This year’s fair will be the first time Wilson County’s renowned fair combines with the Tennessee State Fair into one colossal event, so Lacy is optimistic that they could be onto something big here.

The theme for this year’s fair is Hometown Heroes, so Lacy and Sgt. PJ Hardy, Lebanon Police Department’s public information officer, decided to pit first responder units against each other for countywide bragging rights in this first test run of the event. So, in addition to LPD, there will be teams representing the Lebanon Fire Department, Wilson Emergency Management Agency, Mt. Juliet Police Department, Mt. Juliet Fire Department and the Wilson County Sheriff’s Office.

The race starts at 11 a.m. but the Neddy Jacobs Heritage Day event kicks off at 9 a.m. Gwen Scott, Fiddler Grove’s event coordinator, said it will be a day “you won’t want to miss.”

Scott ran down the list of things to do Saturday and it went on and on, from Lincoln log cabin competitions to demonstrations on cleaning cast iron skillets, something “everyone should know how to do,” according to Scott.

The name Neddy Jacobs is historic because he is supposedly the first settler in these parts. When it came time to name the park, Scott said the name Fiddlers Grove emerged as a reference to Jacobs’ fiddling prowess.

Admission to the park is free on Saturday, but donations are appreciated.