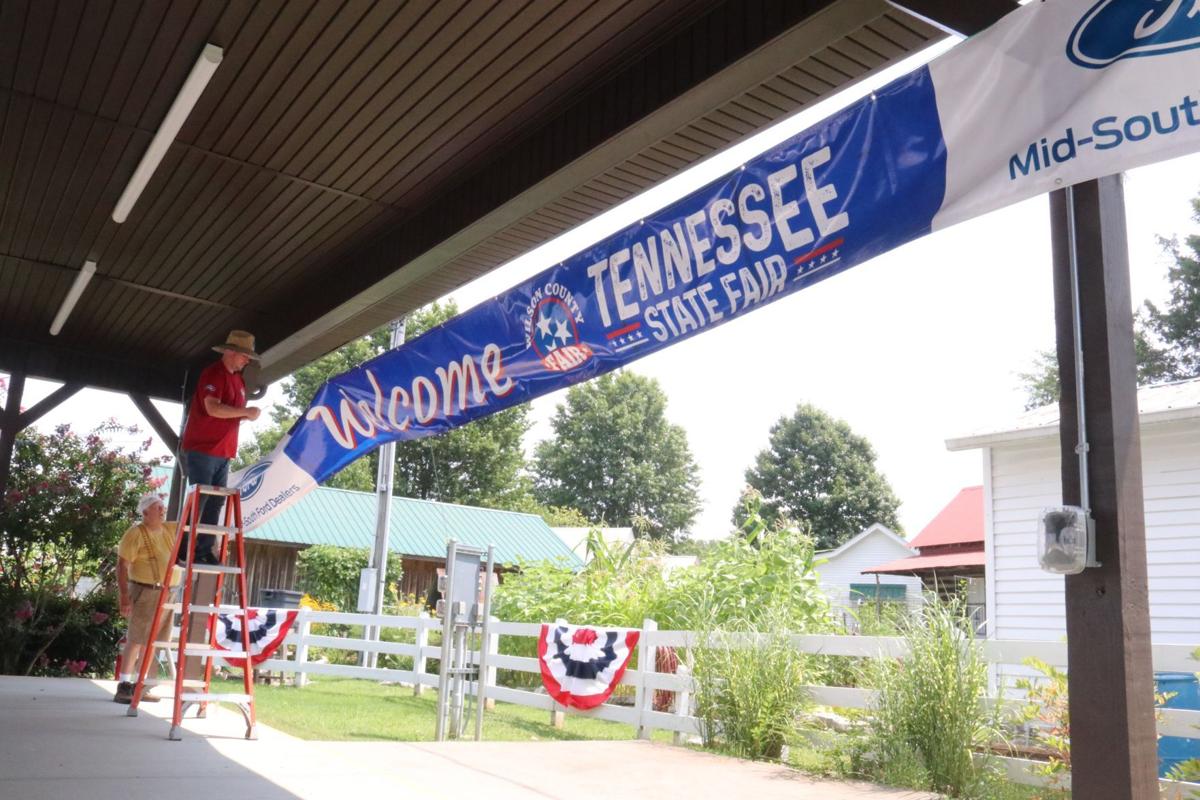 Volunteer Mike George, left, and Tyler Wilson of the groundskeeper staff at the fairgrounds hang a Wilson County Fair — Tennessee State Fair banner under the Goodall Homes Stage on Monday. 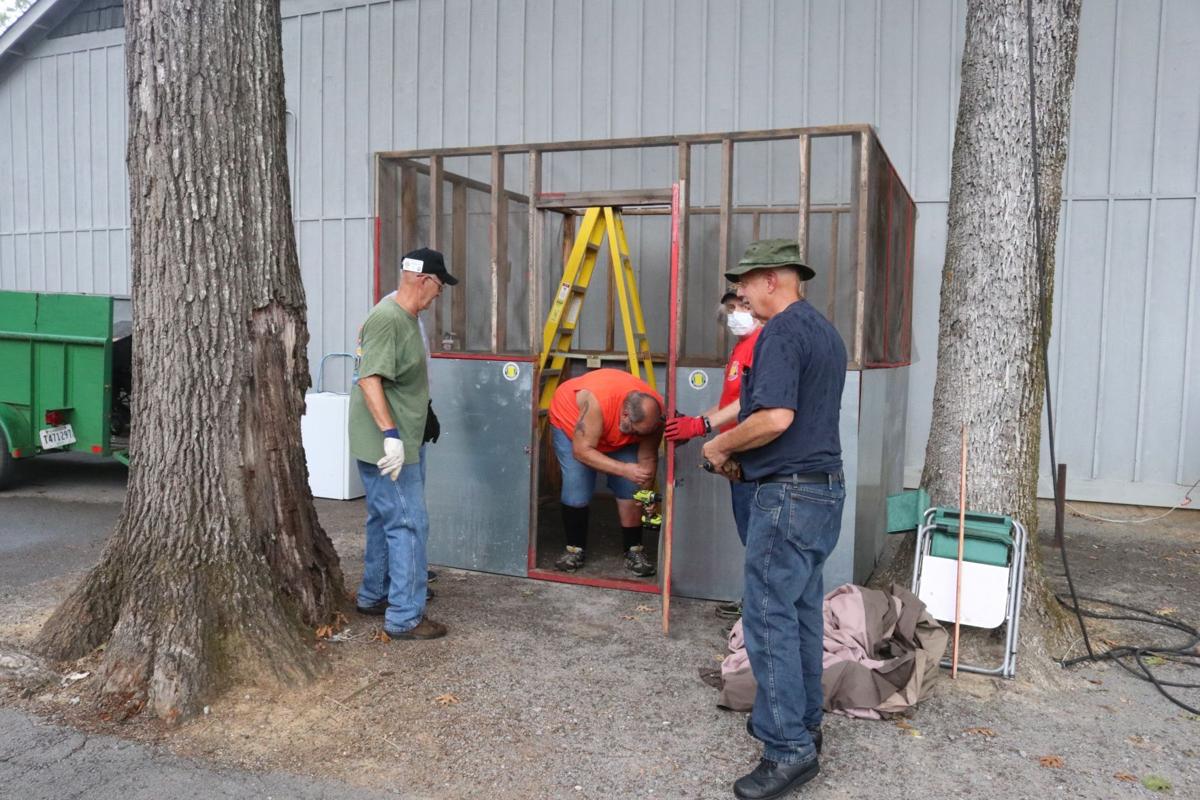 Members of the Vietnam Veterans of America Lebanon Chapter 1004 assemble an area for their chefs to cook hamburgers and the like for sale during the festivities. The VVA is just one of many local organizations who will be represented among vendors at the fair. 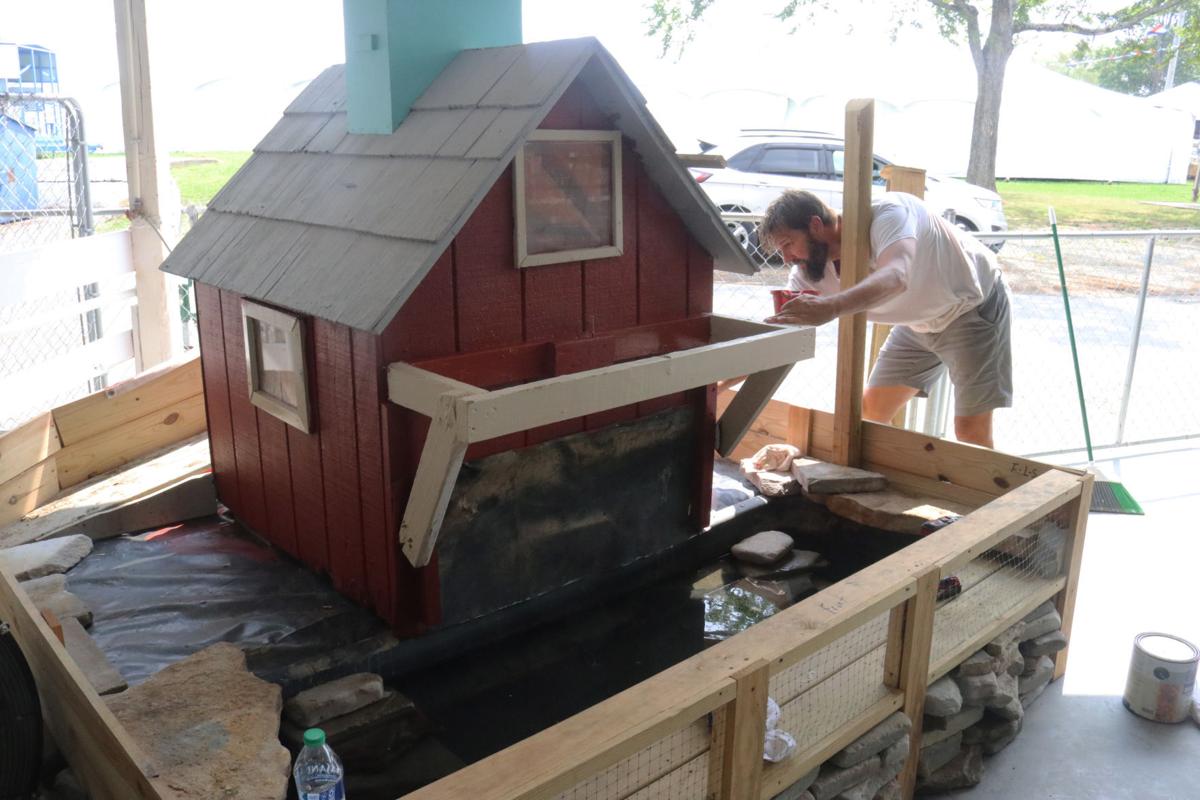 Jackie Taylor, a maintenance crew member at the fairgrounds, touches up paint on a small model barn on the poultry side of the Poultry and Rabbit Barn at the Wilson County Fairgrounds on Monday.

Volunteer Mike George, left, and Tyler Wilson of the groundskeeper staff at the fairgrounds hang a Wilson County Fair — Tennessee State Fair banner under the Goodall Homes Stage on Monday.

Members of the Vietnam Veterans of America Lebanon Chapter 1004 assemble an area for their chefs to cook hamburgers and the like for sale during the festivities. The VVA is just one of many local organizations who will be represented among vendors at the fair.

Jackie Taylor, a maintenance crew member at the fairgrounds, touches up paint on a small model barn on the poultry side of the Poultry and Rabbit Barn at the Wilson County Fairgrounds on Monday.

Now counting down in hours instead of days, the Wilson County Fair — Tennessee State Fair is soon to be here, and the workers, vendors and volunteers at the fairgrounds remain hard at work putting all the finishing touches on the 10-day event.

Helen McPeak is the executive director for Wilson County Promotions, the nonprofit group that organizes and hosts the fair.

McPeak said that the fair uses different agricultural commodities each year to promote the event and that this year is “The Year of Beef,” with an overarching theme of Honoring Hometown Heroes.

“What better way to promote the fair and what’s more American than both of those?” McPeak asked.

Apple pie? Well there will be an apple pie contest this year, too. While the apple pie contest has long been a staple at the Tennessee State Fair, this will be the first time the Wilson County Fair will be hosting the competition.

There will also be nightly appearances by the Cowboy Ninja Warrior, Lance Pekus, who will be performing his array of stunts daily to promote the beef cattle industry. “Beef It’s Whats for Dinner Ninja Course,” will be showcased every day of the fair.

For anyone interested, Pekus has advanced to the later stages of American Ninja Warrior, the popular show on NBC, so after meeting him, festival goers can cheer him on from their sofas at home.

What it means for Wilson County

Clemons said that he is expecting a full turnout, matching totals from years past. In 2020, the pandemic forced the fair to shutter its doors, so the excitement around its return is being felt not just in the main office but among the volunteers and workers who, as McPeak said, “make all this possible.”

One of those workers, Shatena Cowan, likened the fair to a “family reunion,” and said she was thrilled people would be able to return this year after missing out on it in 2020.

Cowan, who has worked at the fairgrounds for a quarter century, said she knew the fair was going to be a big hit because people were ready to get back out after missing last year.

She said that she has always loved the fair and what it does for the community, as well as the staff that work so hard to put it on. “We love to see all the effort we put into setting up make so many people happy.”

Clemons echoed Cowan about the excitement pent up after a year off.

“We’ve got a great theme, program and items, and people missed out last year, so they are eager to get back out,” Clemons said. “We are going to have additional people coming with it being the state fair.”

Those people will be representatives from each of Tennessee’s 95 counties who will be attending the opening ceremony on Thursday at 6 p.m. in the Farm Bureau Expo Center.

In a press release, Clemons said, “In the Farm Bureau Expo Center, when our entire state will come together for the special ceremony, every county in the state will be represented for a special program where Gov. Bill Lee will speak. The ceremony will celebrate the state of Tennessee and the previous Tennessee State Fair Board moving the location to the Wilson County Fair, Lebanon.”

Additionally, all 95 counties have been asked to exhibit two items showcasing assets of each county.

At the end of the ceremony, Lee will lead a parade out to the new “Made in Tennessee,” building for a groundbreaking event that will begin at 8 p.m.

The new building is scheduled to be completed for the 2022 Wilson County Fair — Tennessee State Fair and will be the home of a competition for winners from 2021 county fairs and county events in roughly 40 categories, where they will bring their first place or best-in-show winners to compete.

The parade to honor the hometown heroes will take place after a military flyover, scheduled for the ceremony’s conclusion, and will feature a mule-drawn wagon followed by Commissioner of Agriculture Dr. Charles Hatcher in an antique truck and Commissioner of Tourism Mark Ezell on a Tennessee Walking Horse.

In the release, Clemons called the fair’s upcoming opening day, “One of the greatest days in the history of Tennessee,” referring to just how significant it was that these two fairs were coming together as one for the first time.

Clemons said, “We are very excited about the future of the Wilson County Fair — Tennessee State Fair as our entire state comes together for ten great days of celebration. We want this fair to showcase the agriculture of our entire state as well as the assets of all 95 counties.”

Clemons and McPeak both applauded the hard work of all the volunteers, estimated to be about 1,600 people, for their support and dedication in helping put on the fair.

Those are hardly the only steps they are taking. Clemons said that the carnival rides would be disinfected using a spray that kills the virus, that hand sanitizer stations would be set up all around the park, that operators would be wiping down seats and such on rides, and that festival goers could even get the seat of a ride cleaned off if they requested it.

Staff from Vanderbilt Wilson County Hospital will also be on site offering vaccinations to any one attending the fair who wishes to receive one.

In the event of an unexpected storm, Clemons said the guests can go inside the buildings of which there are numerous, all of them filled with events or shows of some kind and ride out the storm from the shelter’s safety.

McPeak said with all the huge livestock buildings, the Ag Center and other dwellings on site, festival goers shouldn’t have any problem finding shelter should they need it quickly.