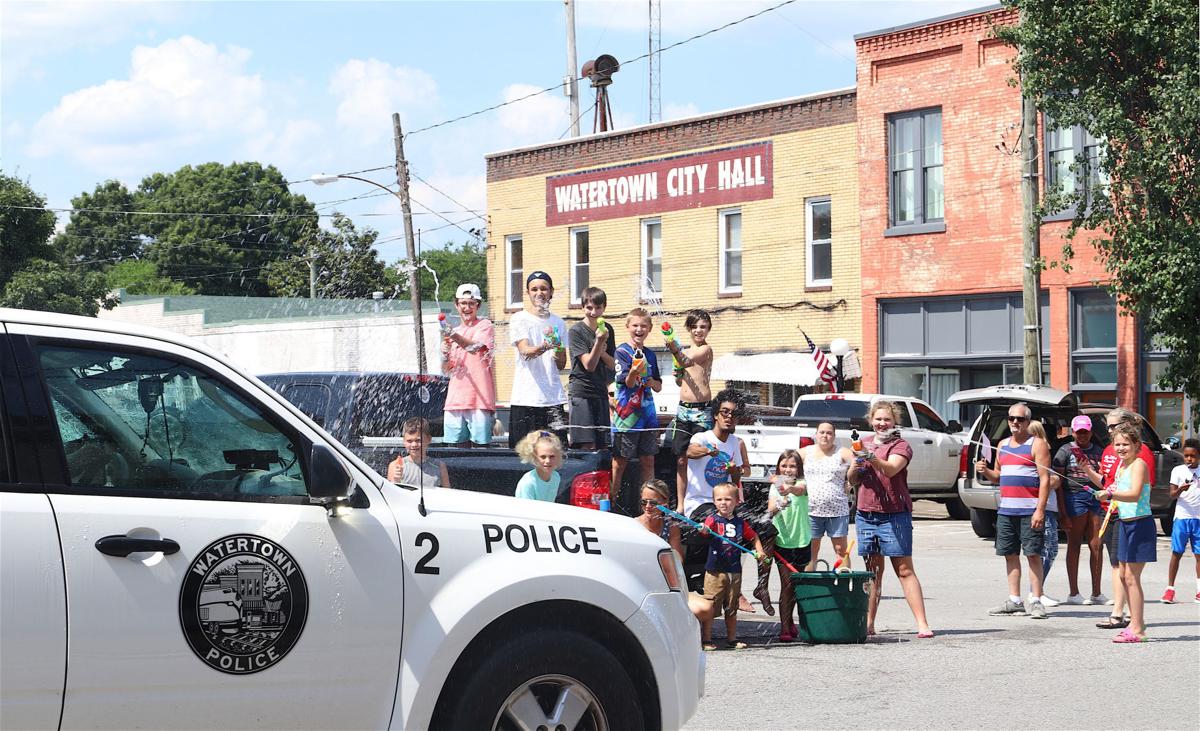 The Watertown Police Department takes some friendly fire during the city’s July 4 parade, which doubles as a water gun battle between floats and bystanders. 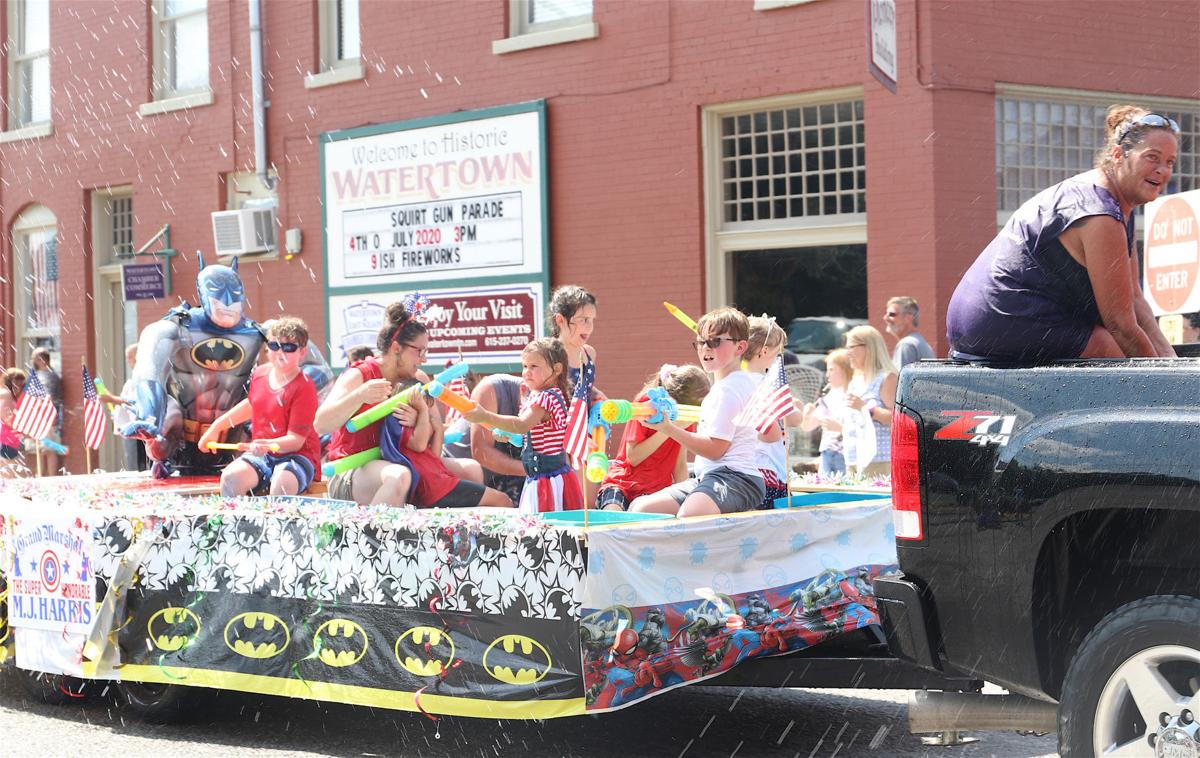 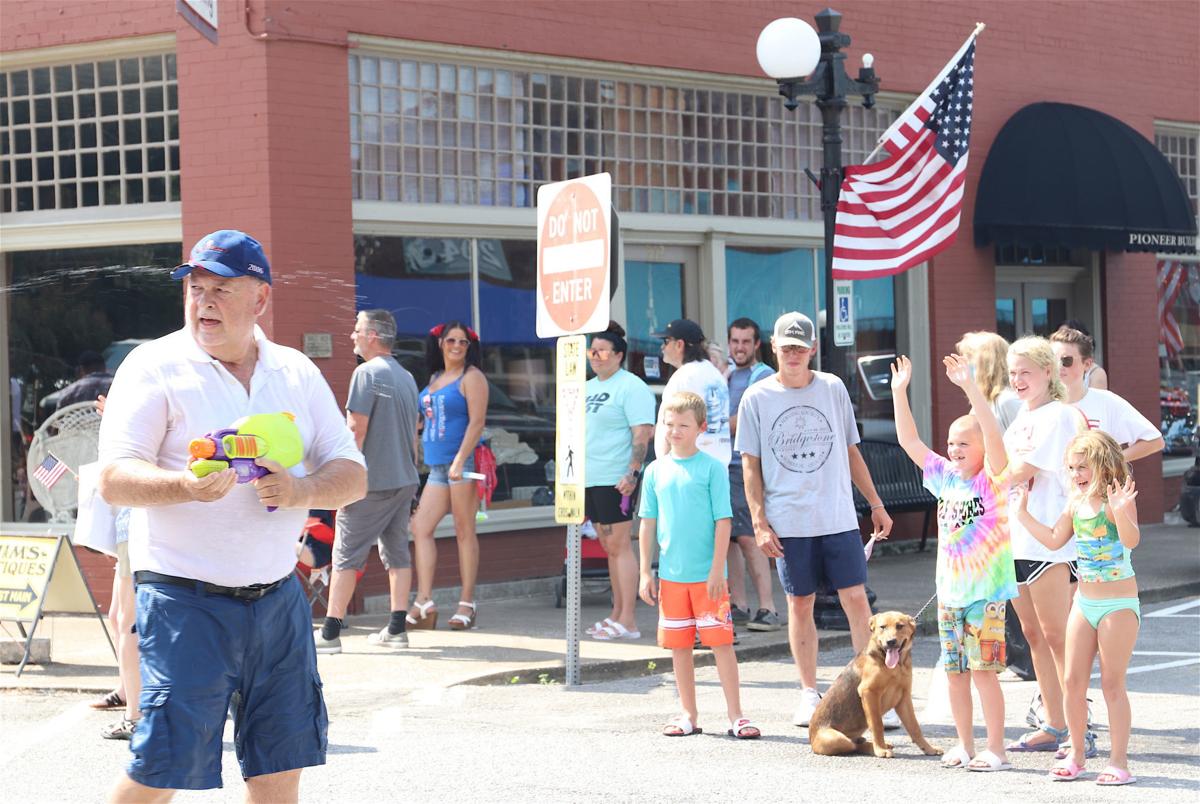 Watertown Mayor Mike Jennings wades into the city's squirt gun battle and trades shots with children on the square.

The Watertown Police Department takes some friendly fire during the city’s July 4 parade, which doubles as a water gun battle between floats and bystanders.

Watertown Mayor Mike Jennings wades into the city's squirt gun battle and trades shots with children on the square.

Watertown’s city square transformed into a squirt gun battleground for children and adults alike during its July 4 parade, as float riders headed down Main Street trading shots with bystanders.

The scene is part of a longstanding community tradition that continued this year despite initial concerns about COVID-19.

“We’ve all been under the wire with COVID,” organizer Deena Dowd said. “This event was open air, and people could stay in their yards or with people they’re already in contact with daily. We had at least and t 20 floats, so this year was small compared to the one before, but I expected it to be a lot smaller.”

Dowd had originally planned to take the year off from planning the event, but she decided to stay involved because of civil unrest in communities like Nashville related to George Floyd’s death.

“The riots have really bothered me, so my protest against the riots was to have the parade,” she said. “We met with the Chamber of Commerce and the city and decided to have it lead into the city’s fireworks show, and the city of Watertown and the Chamber split the cost of the fireworks.”

Local preschool student M.J. Harris headed up the parade as grand marshal, which helped him have a fun weekend with family before his surgery to remove a brain tumor on Wednesday. His group traveled the route in a superhero-themed float with some help from Batman.

“M.J. loved it, even though he did get a little scared once we got to the square with the water coming from both sides,” M.J.’s mother Lacee Harris said. “We all had a great time, and having the parade during a time like this shows everybody can still come together and have fun with everything going on in the world right now.”

City officials, local businesses and student groups also joined in, and dozens lined the parade route with water guns and buckets at the ready.

“We’ve done this every year going back at least five years,” Vickie Vaughn of General Sign Services said. “We’ve attended for over 10 years, but we used to be on the sidelines. We mix up our float a little bit each year, and we like to make it fun by waiting 15 minutes before we leave and filling our iceboxes with water.”

Vaughn’s husband Toby said attendance varies from year to year, but the two make a point to attend and engage the community.

“This parade is the most fun you can have because everyone is on an equal playing field,” Vickie Vaughn said. “It doesn’t matter if you’re 7 or 70 years old, everybody gets to play around and shoot at each other like little kids.”

The Vaughns worked to decorate their truck in elaborate red, white and blue to mark the holiday, and they could be seen adding the finishing touches during the parade lineup at Round Lick Baptist Church.

Watertown High School’s cheer team also had a unique float that incorporated a kiddie pool. The group has been a regular presence at the parade for years, and many of its students come out to take part.

“We like the company,” Sabrina Ford said. “It’s always a fun event, and it’s just good vibes all around.”

“It’s more like a fight between the people in the parade and the people on the side of the road,” she said. “We love getting to put together a float and be a part of it.”

Dowd said the community at large shared the team’s enthusiasm for the parade and helped make this year’s event a success.

“Everybody had a great time,” she said. “Some of these people haven’t seen each other in months because of COVID-19, so there’s a sense of happiness to get out and get back to normal in Watertown.”