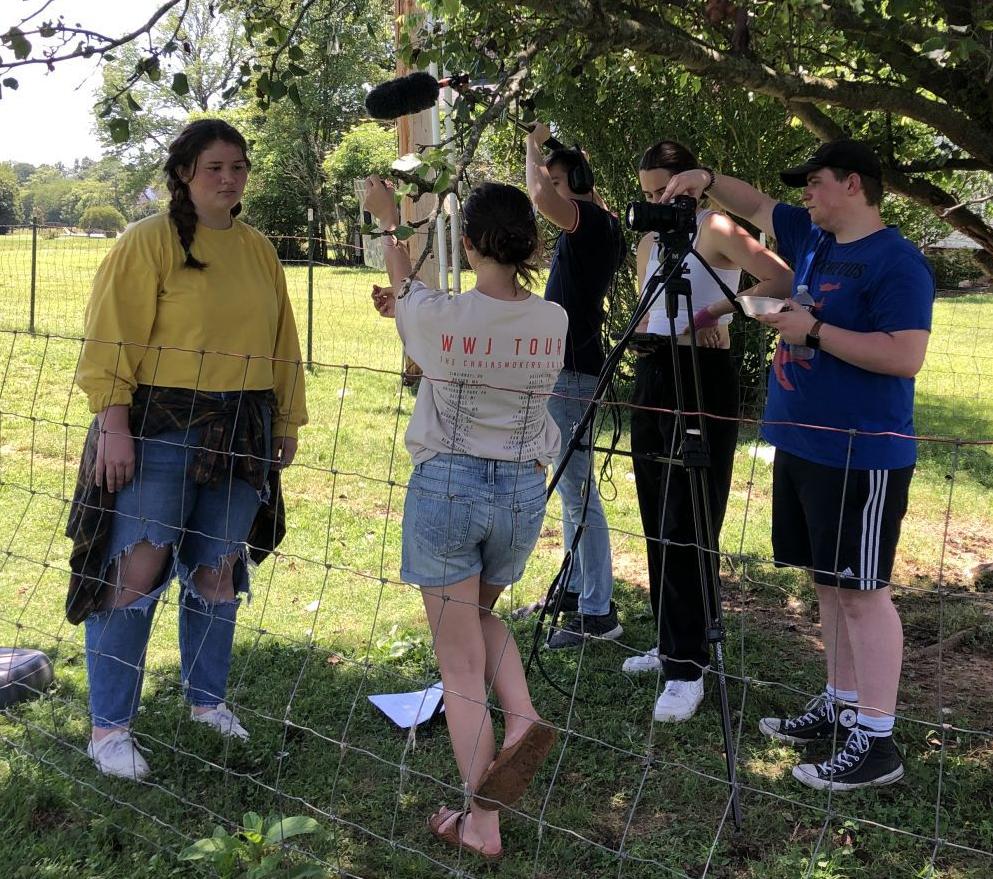 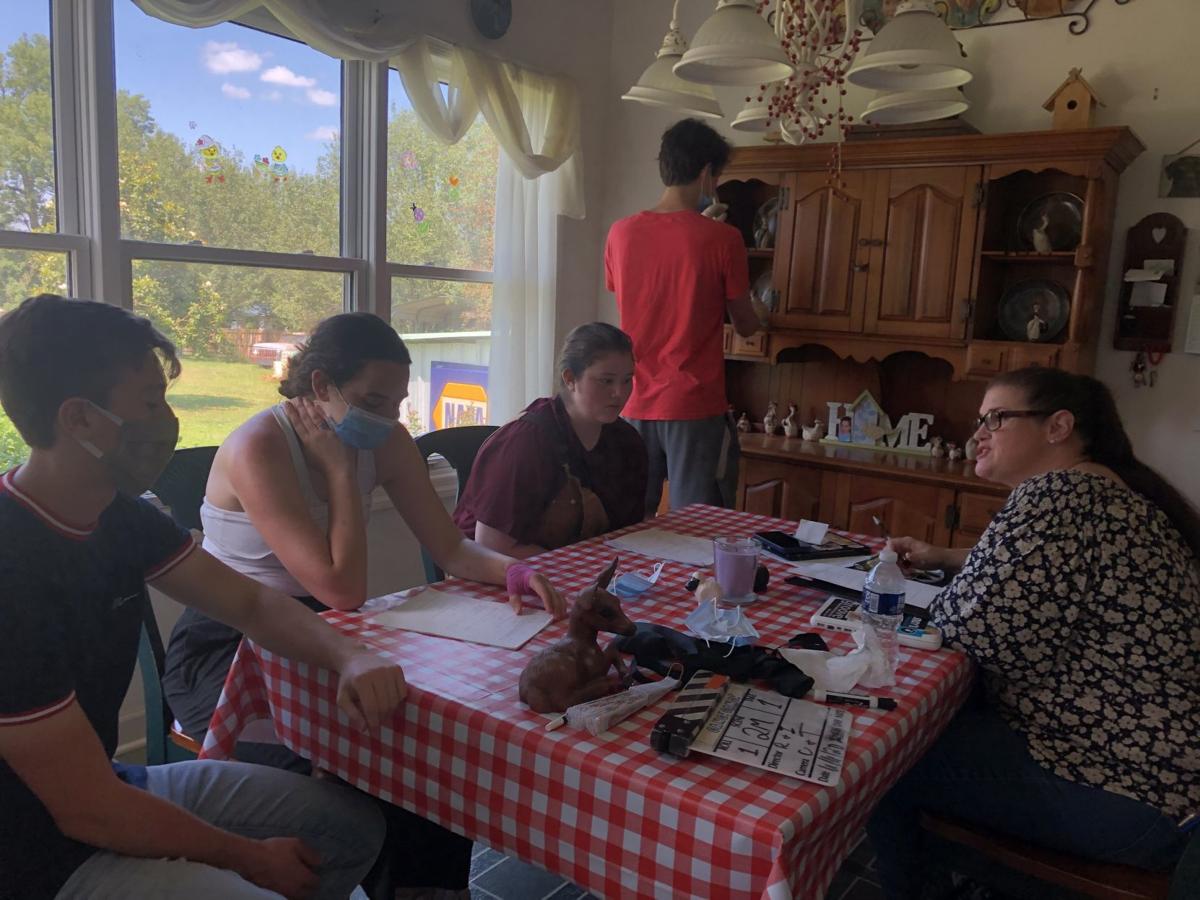 Forty-eight hours may not seem like enough time to shoot a movie, let alone write and edit it, but Wilson Central High School student Isabelle Leonard led her team to do just that for the 48 Hour Global Film Challenge.

“MAR-E 01” is a coming-of-age science fiction short film about a girl and her mother’s conflicting personalities — set against the backdrop of her friendship with a robotic sheep. The project won the U.S. finals and is currently competing internationally for a spot at the Cannes Film Festival.

“I think it’s really awesome that we made a film with story, subtext and symbolism that had a quirky look,” Leonard, who co-directed, produced and edited the project, said. “I don’t know how we did it in 48 hours, but it was so much fun, and I loved working with everyone.”

Leonard met most of her crew members while attending the Tennessee Governor’s School for the Arts at MTSU last year and brought in WCHS classmates Ellie Cagle and Lane Stanley to round out the team.

“We all share a passion for filmmaking, and we wanted to come together and take this on,” director of photography and associate producer Cason Smith said. “It’s been incredibly humbling and awe-inspiring, and it brings so much joy to my heart. I’m 18, and I’m pretty sure I’m the oldest person on my team. It shows that a group of teenagers can create something that goes toe-to-toe with film professionals if they put in the effort.”

Part of that effort involved being able to adapt. Organizers gave the team two genres to pick from, and they had to work one specific prop, line and character each into their script.

“We were given a choice between mystery and sci-fi, and for a lot of us that was difficult,” Stanley, who handled sound mixing and key grip, said. “We originally wanted to do something action-heavy, but our two directors felt like something more drama based.”

After a rapid-fire pitching session, the team came up with the unlikely idea to pair a girl and a robotic sheep.

“I live on a farm, and we knew we wanted to film in that setting for a unique production quality,” she said. “As high schoolers we had access to a lot of teen actors, and one of our sheep, Mary, a family had her as a pet before we got her. She likes being with people more than the other sheep, so I knew it would be easier to work with her.”

Some of the team had concerns about bringing an animal on board for a two-day project, but Mary proved a capable actor.

“We were sitting there like, ‘what are you doing?’ ” Smith recalled. “One of the biggest rules in filmmaking is that you don’t work with children and don’t work with animals, because it’s a death sentence for a production. But it was Izzy’s sheep so she knew how to work with it, and the tone and everything all just clicked eventually.”

The crew had to figure out ways to coax Mary with treats without viewers being able to notice, and one shot featuring a group of sheep involved some covert herding.

“There’s one part where the sheep have to chase the main character,” Stanley said. “They wouldn’t do that normally, so I was actually chasing the sheep just outside the shot. We had to do so many takes.”

The team also brought on WCHS theater instructor Katharine Boettcher to play Tanya Baddington, whose conversations with her daughter Birdie — played by LeAnne Marsh — make up the film’s emotional core.

“Katharine is my theater teacher, so we already had a good relationship going into filming,” Marsh said. “It was a lot of fun, and it was actually my first time doing film acting … I think now that I’ve done film, I like it better than being on a stage. You have to be big in theater productions so the people in the back row can feel it. I’m more of a small emotion kind of person, where you can communicate with facial expressions or tone.”

Cagle and team member Justice Skinner penned the script with a focus on Birdie and Tanya’s contrasting characters.

“It was challenging at first to find our main conflict,” Cagle, who also worked as an assistant director, said. “We knew we wanted to go the route on a relationship between a mother and daughter. I have a close relationship with my mother, and Justice was open to hearing my real life experiences — the good, the bad and the ugly.”

Ultimately, they decided to focus the story on the friction between analytical loner Birdie and the more outgoing former athlete Tanya, whose relationship eventually deepens as a result.

“The actors did great, and it was fun coming up with this character of Birdie because she’s more scientific and introverted,” Cagle said. “You can tell she wants to connect with people, but there’s an emotional barrier. The mother appreciates her daughter being unique in that way, but she wants her to have memories beyond being by herself.”

After entering the film for review on June 7, the crew got together for a watch party. Smith said he spent enough time with each shot in the editing room to watch the group’s reactions instead.

“That was the biggest joy for me,” he said. “For some of them it was their first time watching any of the footage and seeing how happy they all were was a really cool encapsulation of why we do this.”

With nearly 400 other teams in contention, Leonard and the others thought that screening would be the end of their journey. Then they won the city-level competition in Nashville.

“We first found out we won the Nashville competition maybe a week or two after we submitted,” Cagle said. “We were stunned because we competed against professional filmmakers and we had little to no budget, and it was even more stunning when we beat Los Angeles later on because that’s the place to go for films.”

The Nashville round was decided by judges, but the others were determined by voters. Wilson County continued to support the team as they moved through the U.S. rounds, and they won the national finals after beating teams from Los Angeles and New Haven, Connecticut.

“We did this for fun, and none of us were expecting to win anything,” Leonard said. “When we won Best Film and Best Editing in Nashville, I jumped up and down, I screamed, I called everybody. It feels awesome to know we did this independently as teenagers and beat people who have been doing 48-hour film competitions for years.”

Leonard said the community also played an important role, from supplying some of the equipment used in the shoot to voting for “MAR-E 01” each round.

“This really goes to show that people still want to make films even with everything going on in the world right now,” she said. “It’s exciting and extraordinary, and without the support from our community we wouldn’t be where we are right now.”

Where to watch and where to vote

Wilson Central High School student Isabelle Leonard and her team are currently competing in the final stages of the 48 Hour Global Film Challenge. After winning the U.S. finals, their sci-fi short film 'MAR-E 01' became one of 16 international projects vying for a spot at the Cannes Film Festival.

Those interested in watching or voting for their film can visit https://cinema48.com/voting. Free registration is required to vote, and the current round runs through July 2.