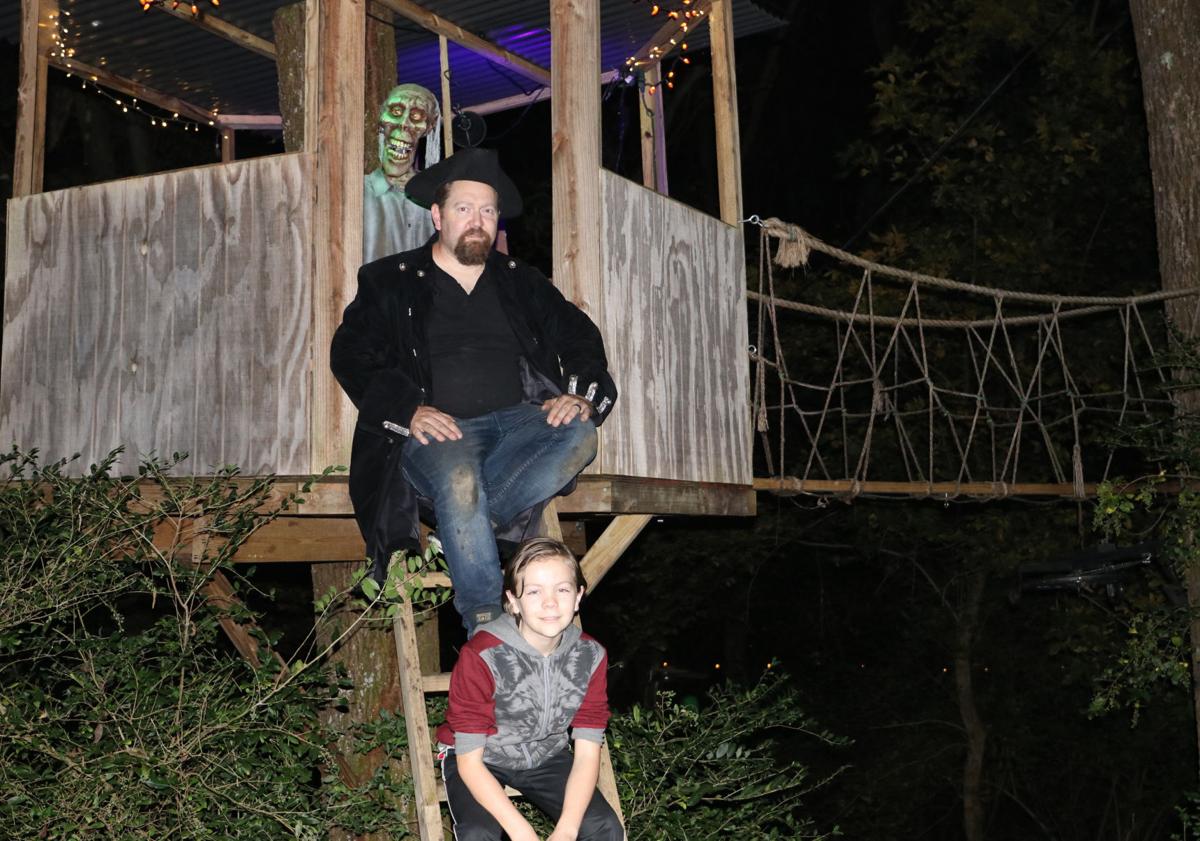 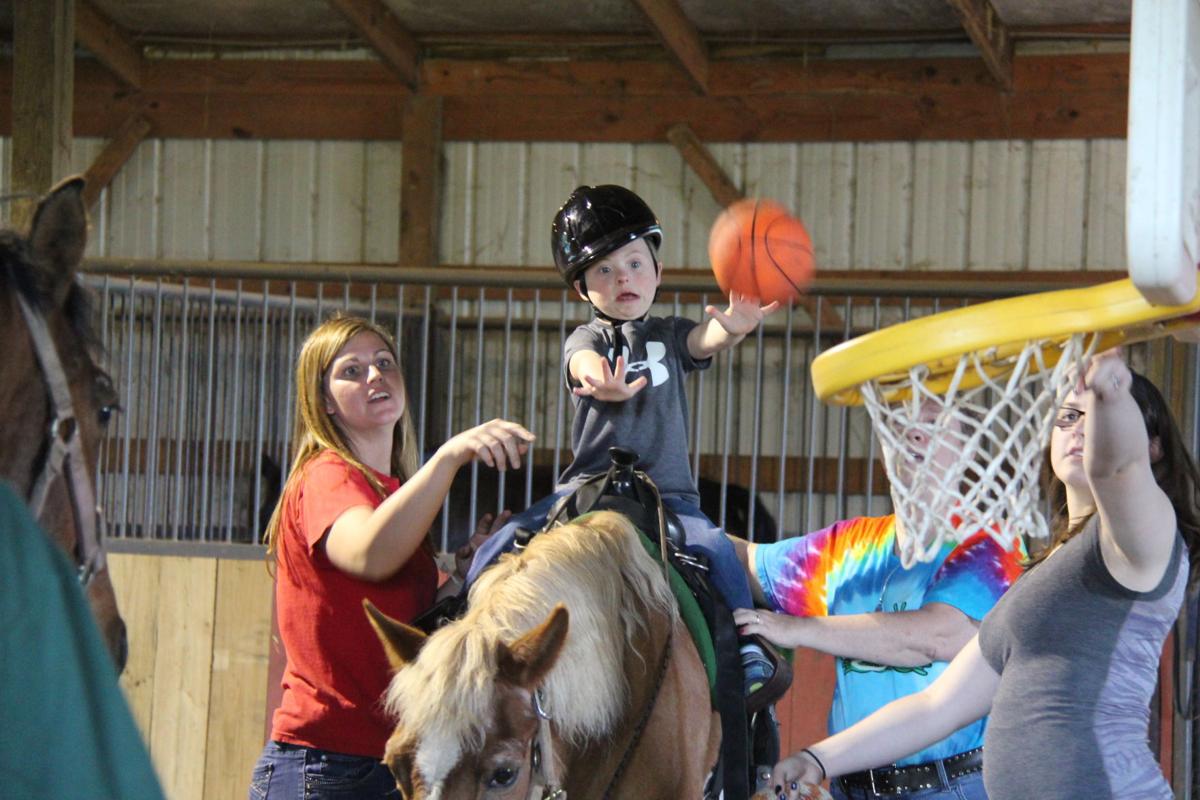 Liam McCall plays basketball during a therapeutic horse riding class at the nonprofit Southern Starrs, Inc., which is hosting a Trick ‘R’ Treat Trailride on Saturday. Children ages 3-12 will be able to ride the program’s therapy horses along a 15-minute trail as a safe alternative to trick-or-treating. 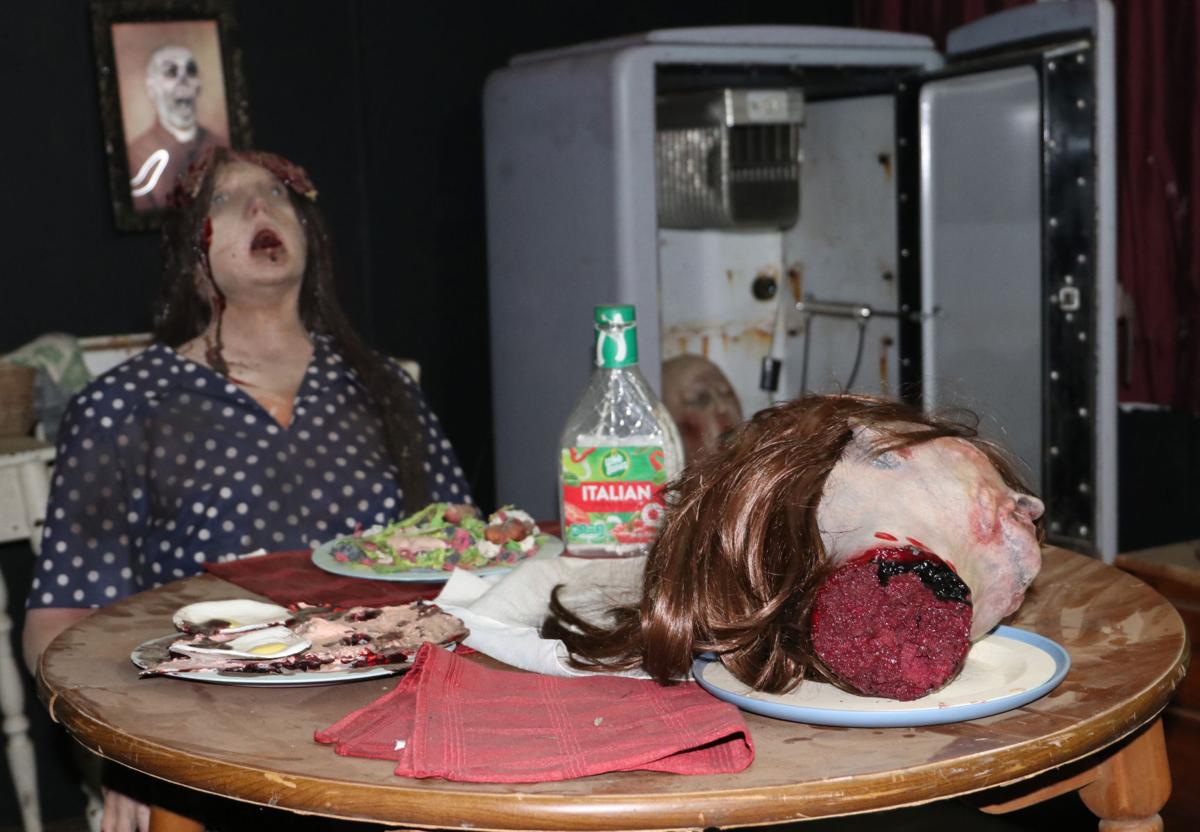 This chilling scene is the first thing people will see before entering Dead Land Scream Park’s newest attraction, which is themed around famous serial killers. Employees recommend not bringing children under the age of 9 into the attractions to avoid frightening them.

Liam McCall plays basketball during a therapeutic horse riding class at the nonprofit Southern Starrs, Inc., which is hosting a Trick ‘R’ Treat Trailride on Saturday. Children ages 3-12 will be able to ride the program’s therapy horses along a 15-minute trail as a safe alternative to trick-or-treating.

This chilling scene is the first thing people will see before entering Dead Land Scream Park’s newest attraction, which is themed around famous serial killers. Employees recommend not bringing children under the age of 9 into the attractions to avoid frightening them.

Halloween is right around the corner, and Wilson County has plenty of holiday haunts for families to visit. Here are some of the events happening around town on Saturday:

Children ages 3-12 can pick up this year’s Halloween candy while on a horseback trail ride at Southern Starrs, Inc.

The nonprofit works throughout the year to provide therapeutic horseback rides for children with special needs, and this marks their first local benefit trail.

“With COVID coming in and a lot of Hallloween events being cancelled, we decided it was time to try it out,” co-founder Saranne Winfield said. “We kind of started off small this year, so our only sponsor for candy is Edward’s Feed. My husband and I and our volunteers are decorating the trail and pasture and doing some clearing with the tractor.”

Any optional donations collected will be used for expenses such as caring for horses and providing assistance scholarships. Parents can also browse a selection of vendors while their children ride the trail.

“There’s a limited number of spots for vendors in the barn,” Winfield said. “We did that to give parents something to do while their kids are out on the trail. Ferguson Farms will be there … and several homemade craft vendors.”

The Lebanon Wilson Chamber of Commerce, the city of Lebanon and First Baptist Church are teaming up for drive-through trick-or-treating and costumed fun.

More than a dozen vendors will be handing out candy in the church parking lot, with the Lebanon Police Department and Public Safety Department handling traffic. Those familiar with the city’s traditional Halloween on the Square event will feel right at home.

“We typically go down to the square and set up a booth, but with everything going on right now it just wasn’t going to happen,” First Baptist Church Family Pastor Deric Spurgeon said. “The Chamber contacted us about using our property for an event, and we started thinking of ways to have a drive-through.”

“What we also wanted to do was something for costumes,” Lebanon Wilson Chamber of Commerce Executive Director Melanie Minter said. “We didn’t want to take that away from the children and adults who participate every year, so we decided to have a virtual costume contest.”

That means that instead of competing at Halloween Off the Square, community members can send their Halloween photos to marketing@lebanonwilsonchamber.com from Oct. 31 through Nov. 2 for a chance to win prizes.

The Chamber will announce the top three winners in each age group — along with the overall “Ghoul of the Night” winner — via Facebook on Nov. 7.

“While we’re looking to minimize the scale, we want to give children in the community the same experience,” Minter said. “A lot of churches have been handing out candy this week and we wanted to be part of that.”

Another of the city’s Halloween traditions, Dead Land Scream Park will end its run this season on Saturday.

Attendees can brave three themed attractions, including one that made its debut this year. Ticket prices are $15 for a single attraction and $30 for all three.

“The Portal is a new attraction and it’s all serial killers,” owner Dana Chapman said. “This is also the last year for the Curse, which we’ve had since 2009. I’ll be replacing it with something, but that’s to be announced.”

Halloween night will also include a costume competition at 8 p.m. and a DJ set. Staffers have implemented CDC safety guidelines to prevent the spread of COVID-19, and the attractions are largely outdoors.

“All the lines are 6 feet apart, and you’re only put in with your group,” Chapman said. “So even if that’s two people, you’ll only go in with two.”

Those interested can purchase tickets online at https://www.deadland woods.com/tickets/. Dead Land Scream Park is not recommended for children under the age of 9.

MJ4Hope’s Halloween 5K is set to be its largest yet, with more than 100 people registered online as of Tuesday.

Registration opens at 7:30, with breakfast provided by Houston’s Meat Market. The 5K will begin at 9 a.m., followed by a mile-long Parkinson’s Fun Walk at 9:15 a.m.

“The 5K is going to benefit Ricky Davis.,” MJ4Hope Executive Director Amy Breedlove said. “He’s a Mt. Juliet alumni who sadly passed away on Friday, and it will be in his memory. The proceeds will be used to help the family with funeral expenses.”

Additional funding from the 5K will be directed toward the city’s ongoing tornado relief efforts, while the fun walk’s proceeds will benefit the Peterson Foundation for Parkinson’s.

“Sponsors will also be giving out candy, and children 12 and under are encouraged to wear costumes,” Breedlove said. We’ll be having a costume contest.”

Registration fees are $30 through Friday, $35 on race day and $10 for children 12 and under. Online registration is available at mj4hope.org.

Mt. Juliet’s newest haunted woods attraction was actually built over the course of a decade by local artist Tim Davis and started as a backdrop for Halloween parties.

Last year, Davis and his son Ansel more than doubled the scope of their backyard haunt and decided to let the public join in the fun throughout October.

Raven’s Hollow and the Whispering Woods aims to be a family-friendly setting focused more on atmosphere than scares. Many of its set pieces were inspired by theme park rides like Walt Disney World’s Haunted Mansion.

“My company is called DaVinci Works, and I’m a muralist,” Davis said. “I’ve done a lot of work downtown, and I also did a lot of effects work for the House of Cards restaurant in Nashville.”

Davis specializes in animatronics, props, special effects and more — all on full display along the wooded path,

Families interested in traveling through can do so for free, since the attraction is part of a residence. The Davis family also has hand sanitizer at the entrance and encourages attendees to follow health and safety guidelines.

“We’re outside, so we’re distancing,” he said. “And as long as people are close together they’re asked to wear masks.”

With the success of this year’s run, Davis plans to continue hosting Raven’s Hollow as a public attraction, building onto the haunt and possibly expanding into a dedicated location.

Children and families can enjoy a variety of outdoor activities during the Community Church at Greenvale’s Fall Festival, and leave with Halloween candy in hand.

“It’s going to be a trunk-or-treat, there’s an obstacle course they’re building and a lot of other activities,” Elder Tyler Williams said. “Kids can wear their costumes, and I think it’s a great way for the community to come together.”

A relatively new church in the community, Greenvale has hosted fall festivals for the past few years and built its presence. Williams said the church wants to continue doing so while keeping the public healthy.

“Everything’s going to be outdoors because of the COVID situation,” he said. “It’s been going pretty good holding these. We’re a new church with a smaller group of people but it’s great to be able to serve the community and provide a safe environment.”