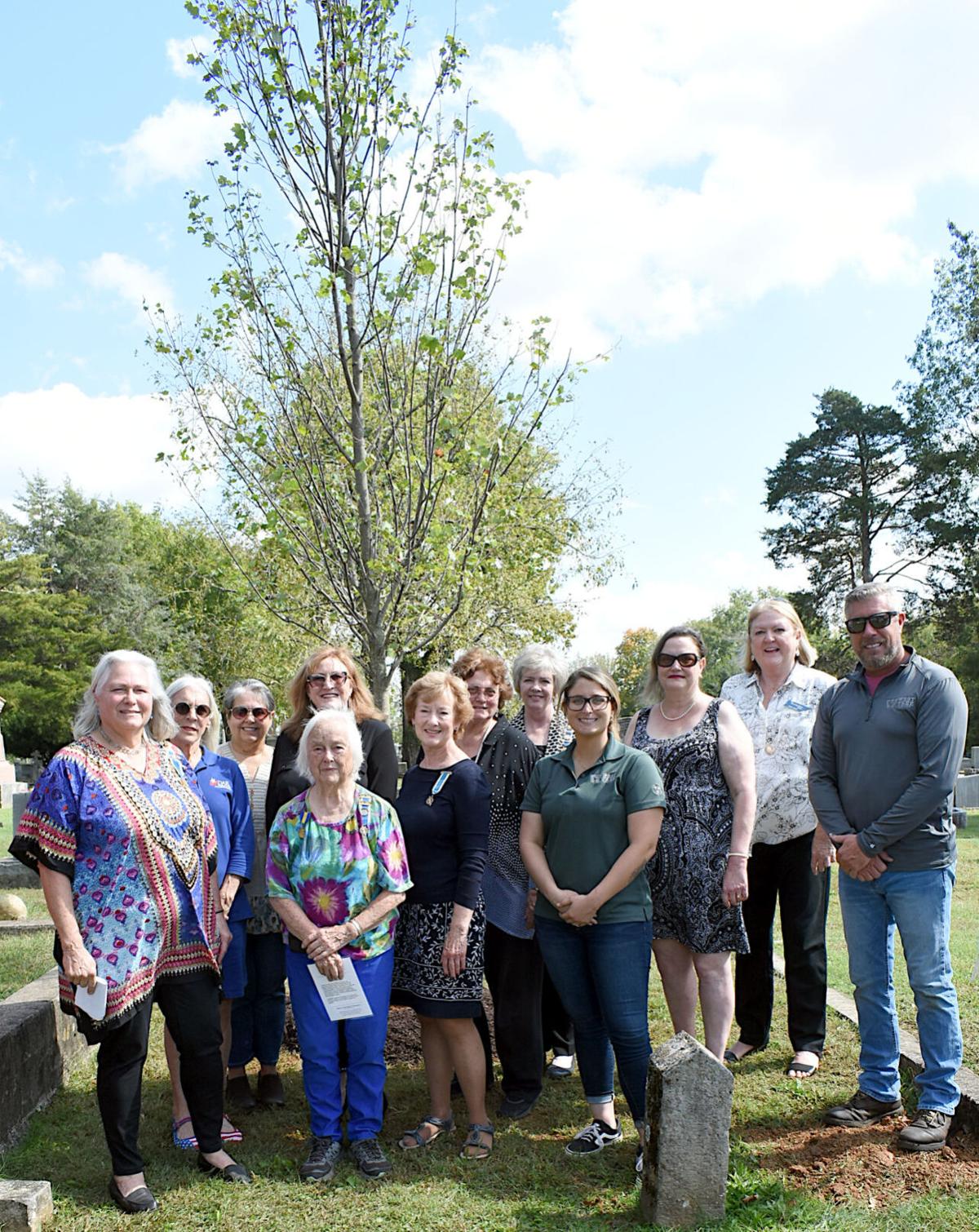 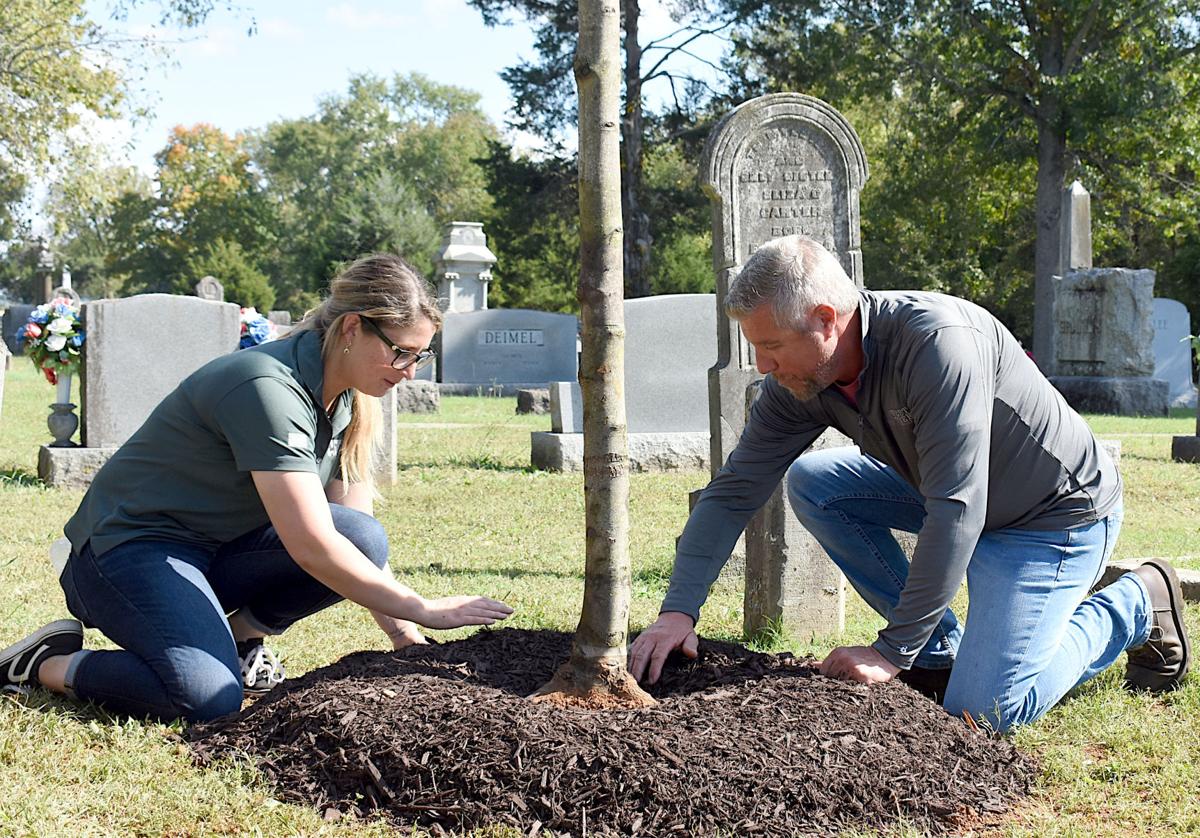 West Tree Service’s Jessica Mallory (at left) and Darrell West arrange mulch around a maple tree that they planted in Cedar Grove Cemetery on Tuesday morning. 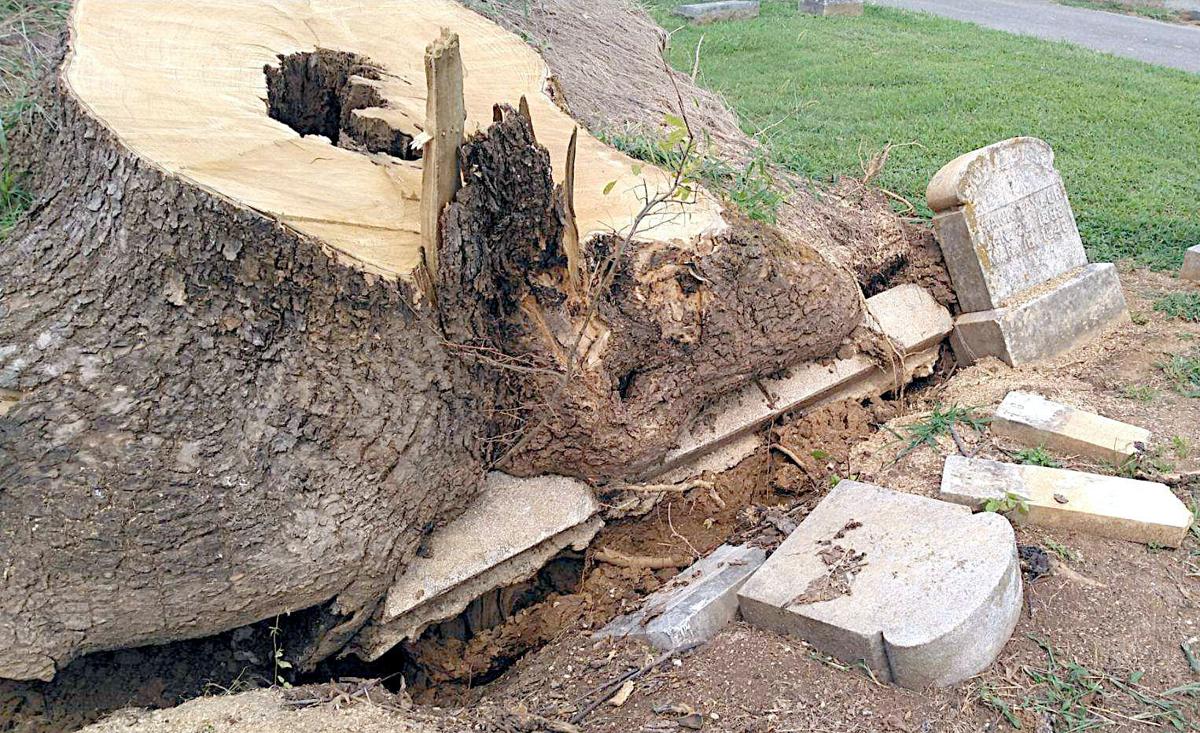 Almost 40 trees in Lebanon’s Cedar Grove Cemetery were lost and monuments were damaged due to a tornado that moved through the area in March of 2020.

West Tree Service’s Jessica Mallory (at left) and Darrell West arrange mulch around a maple tree that they planted in Cedar Grove Cemetery on Tuesday morning.

Almost 40 trees in Lebanon’s Cedar Grove Cemetery were lost and monuments were damaged due to a tornado that moved through the area in March of 2020.

A past life was honored while new life began on Tuesday afternoon at Lebanon’s Cedar Grove Cemetery.

The area Campbell Chapter of the Daughters of the American Revolution (DAR) honored the life of Margaret Hamilton Campbell Pilcher with the planting of a tree near the grave in which Pilcher is buried.

“It’s so exciting,” Judy Sullivan — who is the regent of Lebanon’s Margaret Gaston Chapter — said following the ceremony. “The DAR is all about history and legacy. Trees are so important to history.”

Each DAR chapter in Tennessee is in the midst of planting at least one tree each year for a three-year period.

“Each one is fulfilling that goal, and some are planting much more,” Sullivan said. “To honor Margaret Campbell Pilcher, to honor her with a tree is to honor her for years to come, because it will grow into a beautiful tree.”

The 20-foot maple tree is planted a few feet away from Pilcher’s grave.

Pilcher was accepted in September of 1891 as the first member of the DAR in Tennessee, and she also became a charter member of the Cumberland Chapter in 1894, which was the second chapter to be organized in Tennessee.

Pilcher was the daughter of William B. Campbell, who was the governor of Tennessee from 1851-53. As a young girl, Pilcher — who died in 1921 — lived in Lebanon for a period of time, and the Campbell family home is located off of Coles Ferry Pike in Lebanon.

The maple tree was planted on Tuesday morning by Lebanon’s West Tree Service. The owner of the company, Darrell West, donated the maple tree.

“Sam (Crutcher, the city of Lebanon’s cemetery manager) called me and said something about what they (the DAR) wanted to do,” West said. “I told him that I’d rather donate it. We’ve been blessed with work, so I wanted to do that. They were tickled to death.

“This has been the most gratifying job that I can remember. This tree meant more to me than me getting paid double. It means something to me.”

Cedar Grove Cemetery suffered significant damage when a tornado swept through the area on March 3 of last year, with those winds uprooting trees and causing damage to monuments.

“It was extensive,” Crutcher — who also manages four other city cemeteries (Greenwood, Johnson, Perkins and Rest Hill) — said of the damage. “As I recall, after it was said and done, the tornado uprooted or damaged about 38 trees. Some, it snapped over. Some, it pushed them over and exposed the root balls. There were large markers that were tipped over. There were some of the small obelisks that were tipped over.

“It has taken a while to get that (clean-up) done.”

Crutcher and West point to the work performed by volunteers to help in the clean-up efforts following the tornado.

“I heard that there was so many volunteers here that it was very impressive,” West said. “They did a lot. You couldn’t even drive through here.”

Crutcher added, “A big thank you goes to the public in general. The day after the tornado, there were people here with trucks, equipment and chain saws … anything to help clean up. It looked like a war zone. The public stayed here and worked diligently to repair the cemetery.”

Crutcher indicated that Interstate Restoration Company — which is based out of Fort Worth, Texas — was instrumental in the clean-up.

Though many of the volunteers helped with removing canopies from the damaged trees, West Tree Service — which specializes in tree pruning and tree removal, in addition to planting trees — was hired in July to help with the tree removal, handling the disposal of the tree trunks.

“We finished up what the volunteers couldn’t do,” West said. “Initially, we were brought in for the trees.”

In removing the trees, West Tree Service repaired some of the smaller monuments that were damaged as the ground around them — where the trees were uprooted — was disrupted.

“I wanted to do it properly,” West said. “I didn’t want to cause any further damage.”

West estimates that his company has repaired 18 of the larger monuments in the cemetery as well and still has a few remaining, which he hopes to have completed within the coming weeks.

The company also repaired some damage to monuments in Greenwood Cemetery.

However, West is quick to point out that the work — which has spanned the past 15 months — has resulted in considerable reward.

“We did a lot of work, and through that, we met a lot of people,” West said. “I listened to every person’s story. It’s important to me.

“I can’t explain how this place has made me feel in the last year and a half.”