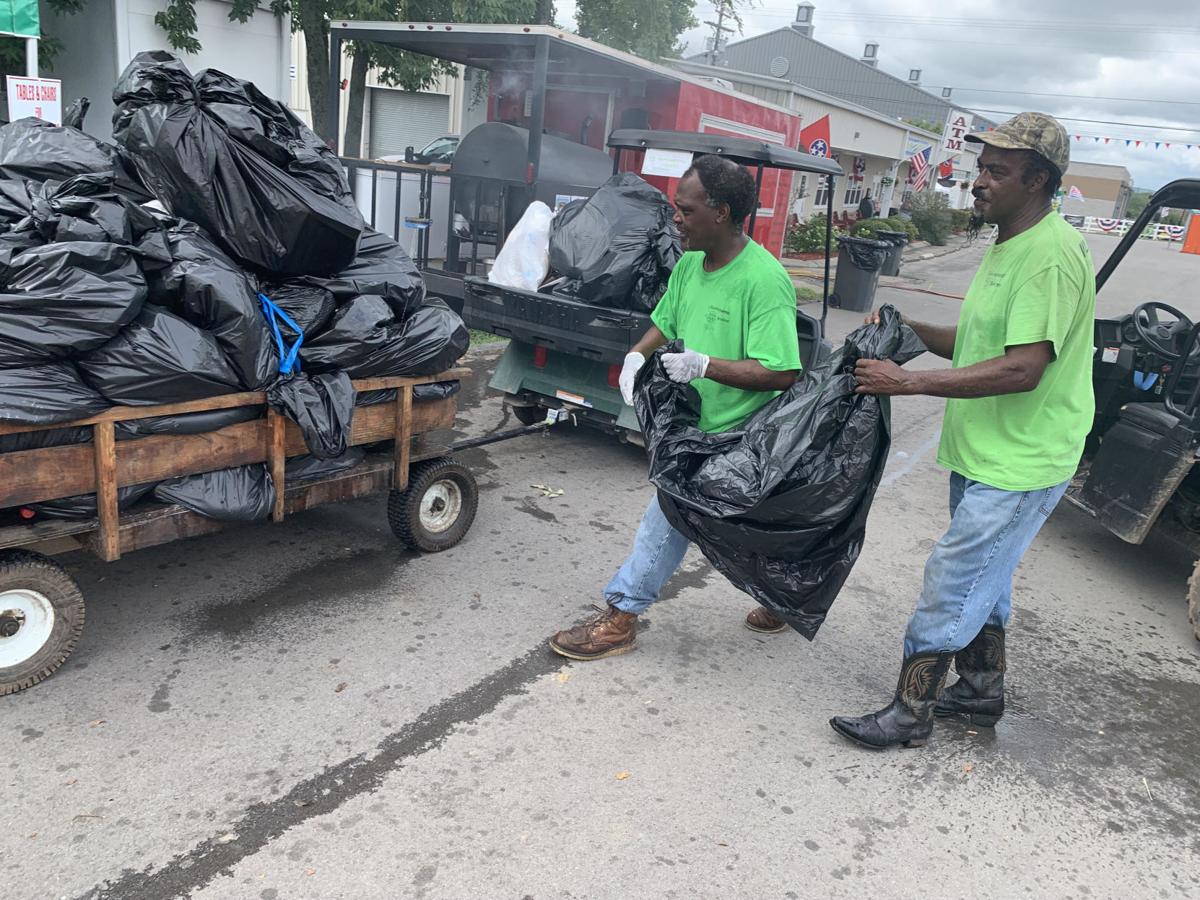 Volunteers Calvin Word, left, of Lebanon, and Myron Dobson of Mt. Juliet load a bag of trash onto a trailer Thursday in preparation for the Wilson County Fair — Tennessee State Fair to open later that day. 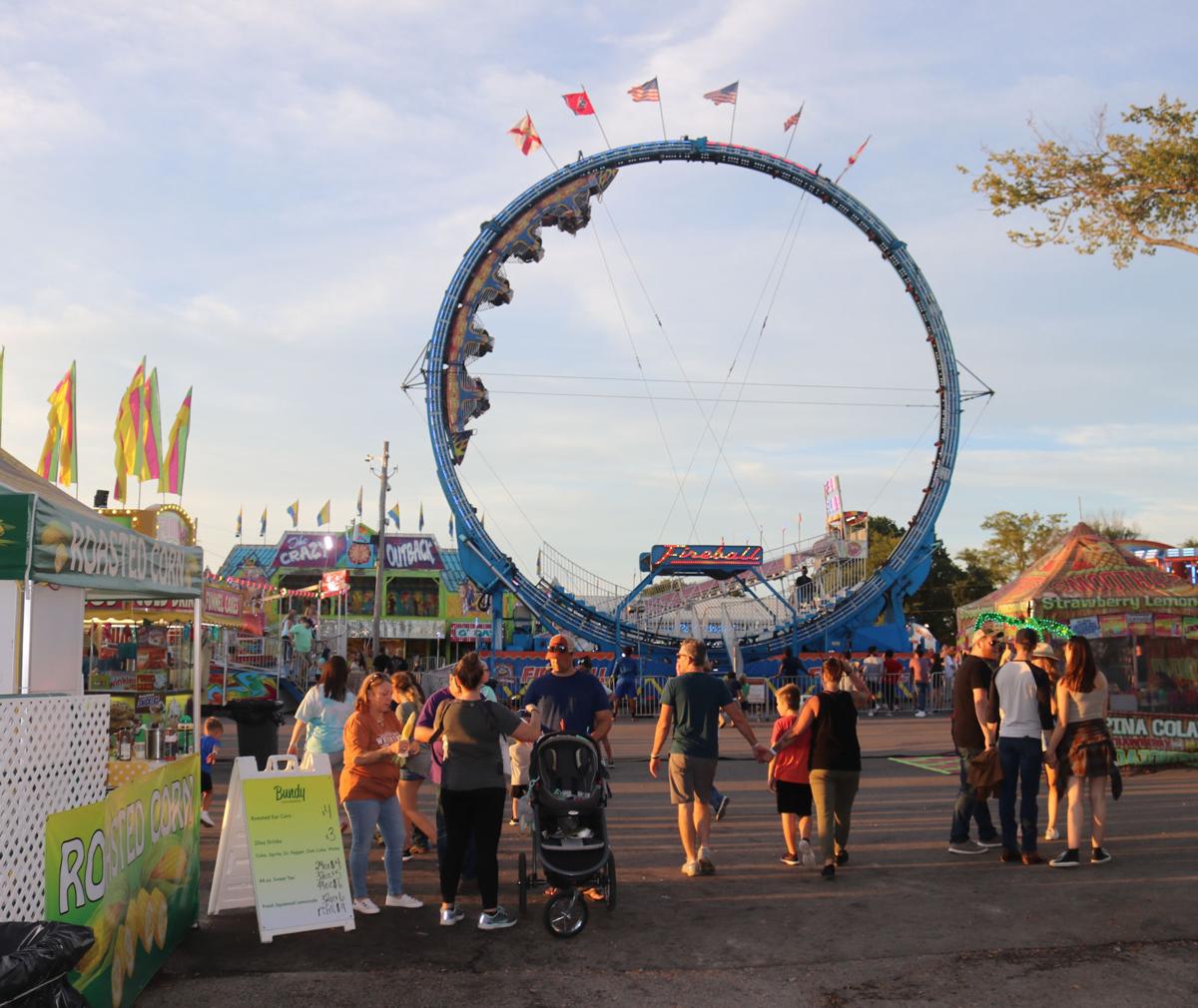 This year’s Wilson County Fair — Tennessee State Fair has been dogged by rainy weather, with scenes like Tuesday’s sunset over the carnival midway rare. The fair ends its 2021 run tonight. Exhibits close at 10 p.m. and the rides at midnight. Visit www.wilsoncountyfair.net for more information.

Volunteers Calvin Word, left, of Lebanon, and Myron Dobson of Mt. Juliet load a bag of trash onto a trailer Thursday in preparation for the Wilson County Fair — Tennessee State Fair to open later that day.

This year’s Wilson County Fair — Tennessee State Fair has been dogged by rainy weather, with scenes like Tuesday’s sunset over the carnival midway rare. The fair ends its 2021 run tonight. Exhibits close at 10 p.m. and the rides at midnight. Visit www.wilsoncountyfair.net for more information.

They don’t call it the Volunteer State for nothing, and the Wilson County Fair — Tennessee State Fair is no exception.

Helen McPeak is the executive director for Wilson County Promotions, the nonprofit organization responsible for putting on the fair each year, and she said it simply could not happen without the tireless effort of the fair’s 1,600 volunteers.

Joe Holbrook is one such volunteer. He’s actually been associated with the fair even longer than Wilson County Promotions.

Holbrook oversees the motorsports arena on the fairgrounds and all the events that take place on the dirt course, such as the demolition derby and the various tractor pulls.

On Friday, Holbrook said, “It’s not like coming in and just setting up a tent. We have a different event out here every night.”

After each event, Holbrook said the arena has to be repaired for the event scheduled to take place the next day. “With all the rain, it can sometimes be a problem, but we’ve been able to have most of the events we scheduled.”

While certain volunteers are assigned to different committees around the grounds, Holbrook said everyone assists where they can. “If someone isn’t busy, they’ll come over and ask how they can help out.”

“To make this happen and happen on time, it takes everyone working together. It’s an effort between everyone on the ground.”

Holbrook’s time with the fair dates back over 40 years, and it’s a love he has passed down to his sons, Michael and Greg. The transplant from Smith County has lived in Wilson County since 1969 and said that he’s glad he can bond with his sons over something they’re all passionate about.

The most rewarding part for him is “seeing everything come together.”

“People around me are dedicated to making things happen,” he said.

“Whatever your hobby is or whatever you’re interested in, whether it’s art or crops or what have you, we try to provide a place for them to display or view that interest. That’s what makes the fair such a success.”

While Holbrook’s role largely centers on one area of the park, another volunteer, Lynette Taylor’s responsibilities encircle the entire grounds. The 25-year fair veteran is in charge of supervising volunteers handling the entrances and admissions.

“We like to have at least a minimum of five volunteers working per entrance,” she said Friday, which works out to about 45 volunteers per day for all the different gates.

For a 10-day fair, manning all those entrances every day is no easy task. “It takes a very large committee of individuals.”

Taylor said the most important task she and her committee of volunteers face is streamlining the entrance process for guests, something made easier by an electronic ticketing system that she said she is thankful for, “especially this year, since it allows guests contactless entry.”

It’s not just entering the fair either, as guests are welcome to come and go. Managing that kind of volume in a timely manner isn’t easy, but Taylor recognizes the importance of making it seamless. “Most people’s first impression is a lasting impression. We want to make sure to get them in and into the fun.”

Her work hardly starts when the fair opens though, as she and her committee start planning months in advance to develop things they see as a need or interest.

“A lot of different factors go into the discounts we offer, but it allows us to have a reasonable cost of admission to offer families,” she said.

Attracting volunteers to help put on the fair has never presented much of a problem, but Taylor said they still like to incentivize those who do donate their time to the organization. For every volunteer who commits 20 hours and officially becomes a committee member, they also get a season pass for their family members to come and enjoy the fair.

“We want it to be family friendly for everyone, including our volunteers.”

Taylor said that assigning volunteers to specific roles and responsibilities is usually based upon their interests.

“We want them to express their interest, and we do our best to put them where they want to be.”

She commended the volunteers for their loyalty and all their hard work. “It’s a living group. You have to be flexible and take things on a day to day basis as needs arise.”

It’s all worth it in the end though according to Taylor. “We just want our guests to come enjoy what we have to offer whether it’s the entertainment, food or the rides.”

Today is the last day, too, so don’t miss a chance to see Tennessee’s largest fair for yourself. Go to www.wilsoncountyfair.net for more information.