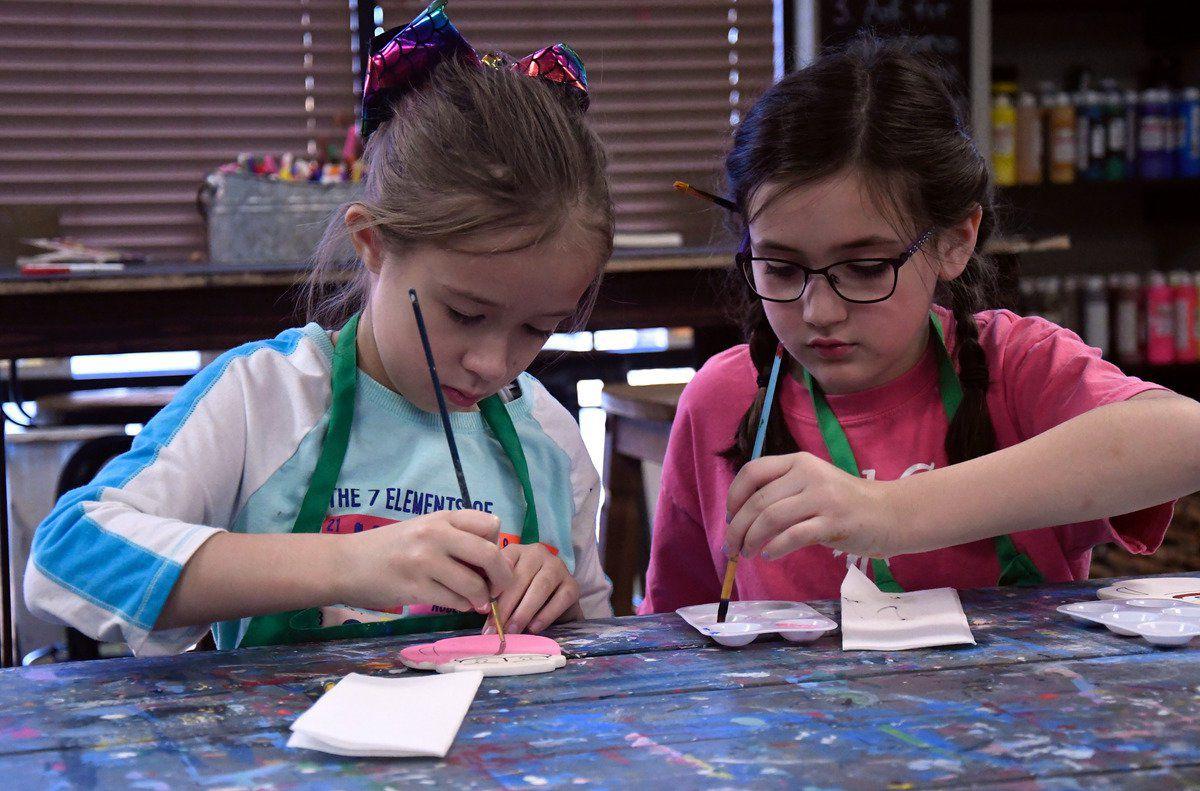 Elizabeth Roth, at left, and Adelynn Junkin paint homemade Christmas ornaments during a three-day art camp at Imagine That! Art Studios, which was held Monday through Wednesday. 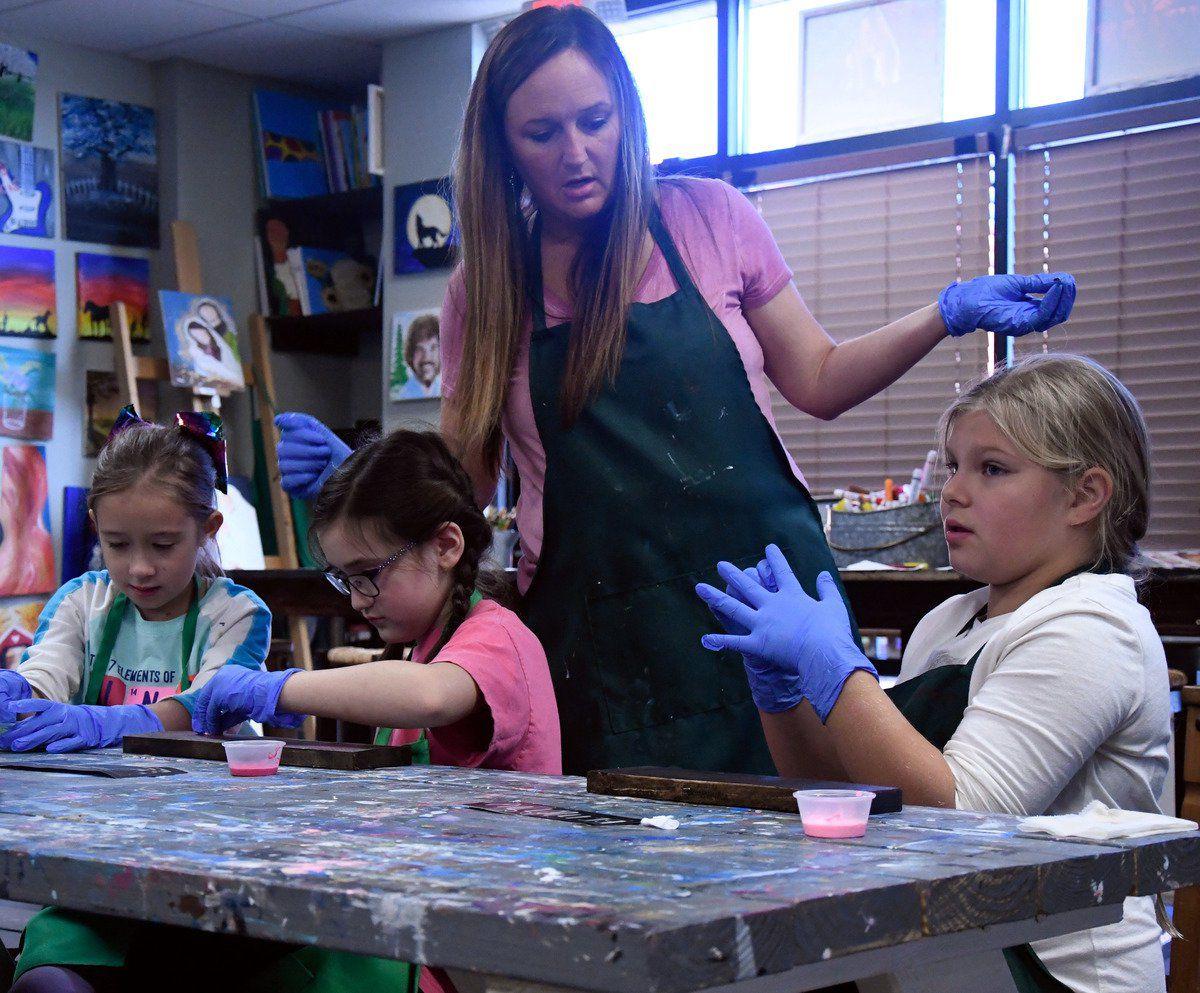 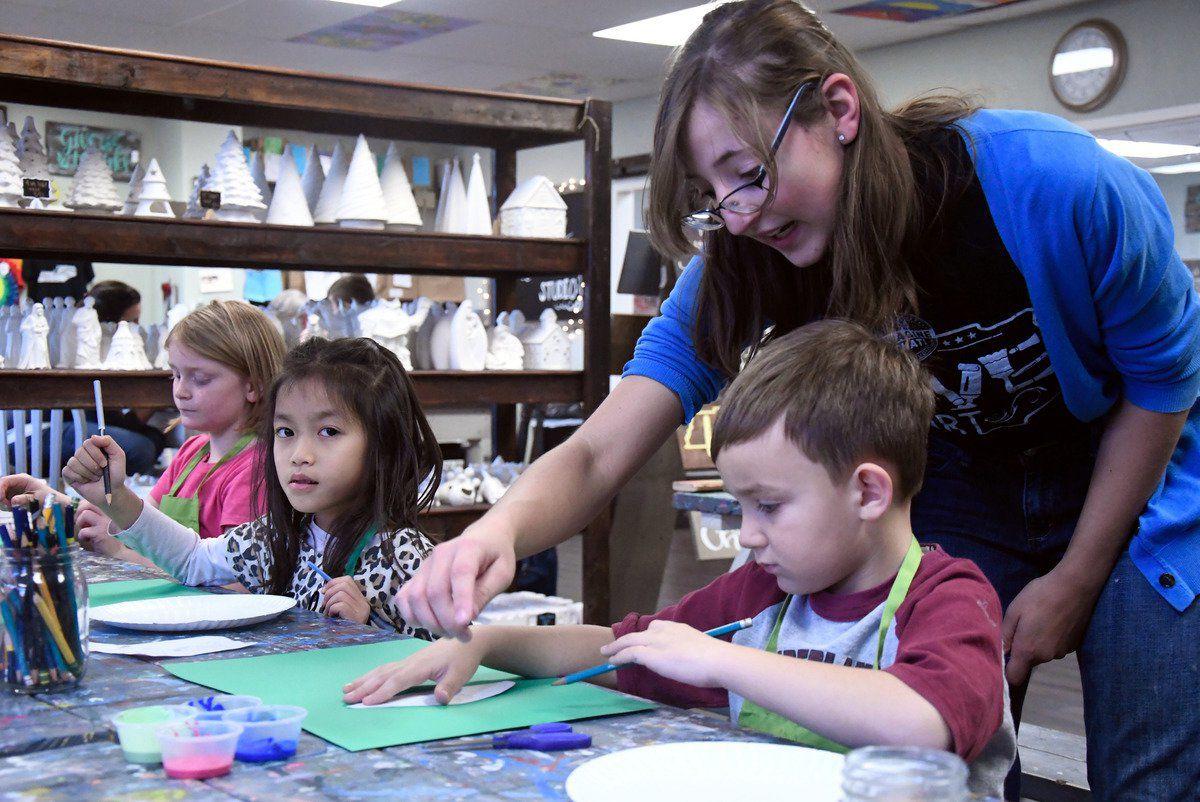 Michea Supinger, at right, shows Owen Bumbalough how to cut out leaf shapes from a stencil as part of a wreath project. Also pictured, from left, are Julianna Daley and Lydia Rattanavong.

Elizabeth Roth, at left, and Adelynn Junkin paint homemade Christmas ornaments during a three-day art camp at Imagine That! Art Studios, which was held Monday through Wednesday.

Michea Supinger, at right, shows Owen Bumbalough how to cut out leaf shapes from a stencil as part of a wreath project. Also pictured, from left, are Julianna Daley and Lydia Rattanavong.

Thanksgiving break doubled as a chance for one group of area students to express their creativity and bring some crafts home for the holidays.

Imagine That! Art Studio hosted a three-day camp Monday through Wednesday, where each child tried their hand at different styles from ceramics to wood.

"We frequently do camps for kids, sometimes more than one at a time to accommodate different age groups," owner Heather Junkin said. "Any time school is out we try to schedule one, and for this week we focused on art projects that relate to Thanksgiving and being grateful for what you have."

Four studio employees worked with the group during the week on a series of projects, including watercolor paintings and windchimes. Sessions lasted from 9 a.m. to 3 p.m. each day.

"I like to think I'm good with kids, and I like to share the art experience with them and give them that opportunity to be expressive," employee Michea Supinger said. "I get to see their creativity come out, because as they're working they pull out their own personality when they decide how to do a project."

While working on the projects, the children could be spotted helping each other and deciding which family members would like which pieces as presents, something they will have another chance to do with the studio's next camp.

"We do have a different type we're offering four times between now and Christmas that focuses on making Christmas gifts," Junkin said, noting that the first one is scheduled to coincide with Lebanon's Small Business Saturday. "Kids can make crafts for the people on their lists during the day while the parents are out doing their own shopping."

Since opening in November 2017, the studio has become a regular spot for many children and families in the area.

"We had a smaller group this time, so everyone got more attention while we got to know them better," Junkin said. "We had a couple new faces, but we're beginning to see lots of repeats because the kids love us and keep coming back. It's always fun to work with them, because it's interesting and sometimes hilarious. They have a lot of personality."