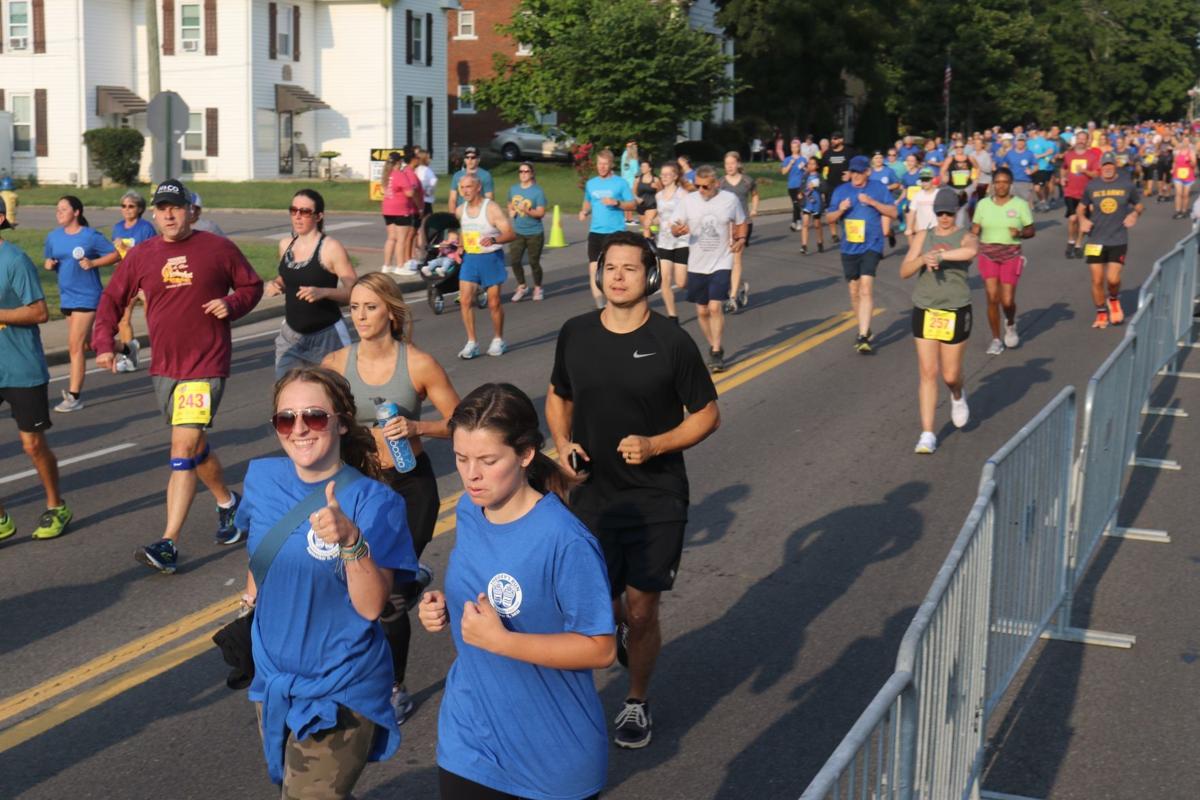 Runners make their way through the first leg of the Sherry’s Run 5K Run/Walk event in Lebanon on Saturday. The race looped down Main Street to Greenwood before connecting with West Baddour Parkway and North Castle Heights. Thanks to 2,500 participants, the event raised over $300,000. 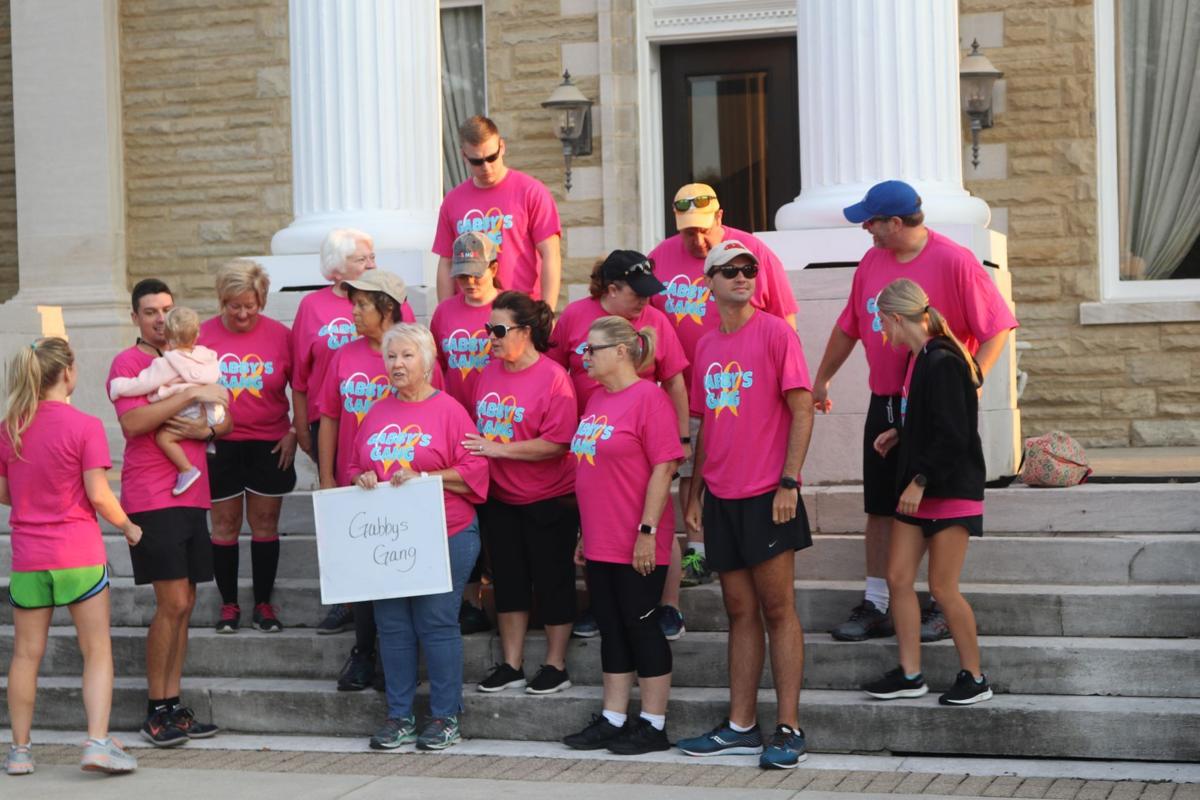 Members of “Gabby’s Gang” prep for a pre-race team photo on the steps of the Mitchell House on Castle Heights Ave. in Lebanon on Saturday morning. Holding the sign is Jody Aulds, grandmother of Gabby Aulds, an honoree of this year’s event.

Runners make their way through the first leg of the Sherry’s Run 5K Run/Walk event in Lebanon on Saturday. The race looped down Main Street to Greenwood before connecting with West Baddour Parkway and North Castle Heights. Thanks to 2,500 participants, the event raised over $300,000.

Members of “Gabby’s Gang” prep for a pre-race team photo on the steps of the Mitchell House on Castle Heights Ave. in Lebanon on Saturday morning. Holding the sign is Jody Aulds, grandmother of Gabby Aulds, an honoree of this year’s event.

Over 2,500 runners and walkers beat the sun up over the weekend to participate in the 18th annual Sherry’s Run 5K Run/Walk, and it seemed like everyone had something in common — they were running to honor a friend or family member.

Adorned with custom T-shirts signifying who they were participating as tribute to, runners rocked team names like “Al’s Army,” “Miles for Martha,” and “Gabby’s Gang,” across their chests.

The winner, Nathan Mangrum, completed his 5K in just over 16 minutes. After the race, the runner from Freed-Hardeman University and Lebanon local said, “I grew up going to Sherry’s Run.”

He was running for one of the title honorees of this year’s event, Cathy Carey, who went to church with Mangrum at the Maple Hills Church of Christ. Mangrum was quite excited as this was his first time winning.

The greatest success from the weekend was the amount of money raised now available to go to the nonprofit’s mission of assisting those going through treatment and recovery. According to Katie Henson, marketing director at Sherry’s Hope, the event raised over $300,000.

An upbeat and funky rock band, the Blues Brokers, set the stage for the event which kicked off from the Mitchell House lawn in Lebanon. Prior to the race’s start, a moment of silence was held for the victims of cancer who had been lost.

Many runners and walkers dedicated their participation to a loved one. Kesia Ashworth-Lawrence’s cousin, Al Ashworth, was one of the names this year’s event was commemorating. Ashworth-Lawrence said, “I came out today because Sherry’s Run was something that Al really took time to help.”

Championing Al’s legacy along with Ashworth-Lawrence were “friends, family and co-workers, really a little bit of everything in Al’s Army,” his cousin quipped.

One participant, Wanda Schoen, was representing the group called “Miles for Martha.” According to Schoen, Martha was a coworker at Vanderbilt Wilson County Hospital and passed away in the last year.

“She was a great person. Fun loving, outgoing and always kept us laughing,” Schoen said.

Schoen is an administrative assistant at the hospital, but many of the people who were running in her group were fellow nurses who knew Martha well from work and wanted to honor her memory in the 5K.

Not everyone was running for a specific person, but rather the cause at large. Ryan Wolfenbarger, executive pastor at Crossroads Fellowship in Tuckers Crossroads, was warming up with his “Crossroad Crusaders.”

“This is our run club. We get together throughout the week to run and spend time together in fellowship,” the pastor said.

Wolfenbarger added that this was his fourth or fifth time competing in the event. Of the crowd in attendance Saturday, he said, “It’s a great crowd, back to how it was before COVID. It’s very exciting.”

Other participants like Robert McGuire of Watertown, were walking in celebration of personal victory. He turned 50 years old this year and a physical revealed prostate cancer in April. The surgery to have it removed was in June, and he said Saturday that so far everything was going good.

His group, the Watertown Warriors was made up of his mom, his wife, daughter and some friends. They all worship together at the Watertown Church of Christ.

Some came out to support coworkers who had family members suffer from cancer. Marquis and Sydney Shipley were representing Gabby’s Gang, another of the 2021 honorees. Sydney Shipley works at Rochelle, McCulloch & Aulds in Lebanon. Jody Aulds is one of the partners at the firm and Gabby was her daughter. For Sydney Shipley this was a way of showing support for a friend and colleague.

While it was the first time participating in the event, Marquis Shipley said that his father also had cancer and that in a way he felt like he was walking for him too on Saturday.

These kinds of events rely on the help of volunteers, especially since Sherry’s Hope, the nonprofit, only has three paid employees. Some of those volunteers were Drew East, Marcus White and Corey Jones, three members of the Lebanon High School basketball team.

On Saturday, they were helping direct traffic and parking. Each acknowledged that they were happy to be able to be a part of an event with so much impact around the community. East even shared a story of his grandfather, who passed away from cancer while East’s father was still in high school, so for him, this battle against cancer is personal.