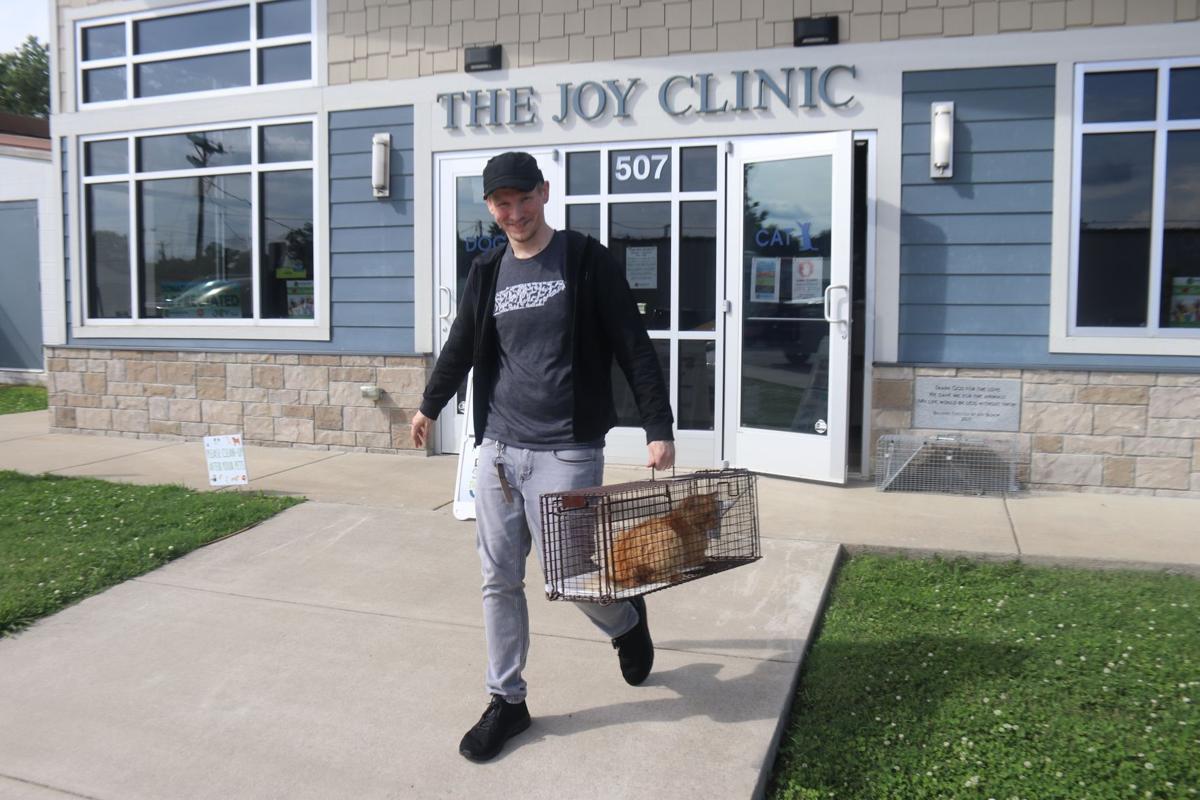 Richard Kowalski, a crew member at the JOY Clinic in Lebanon, delivers a trapped feral cat to the person picking it up following the surgery to have it neutered on Tuesday. 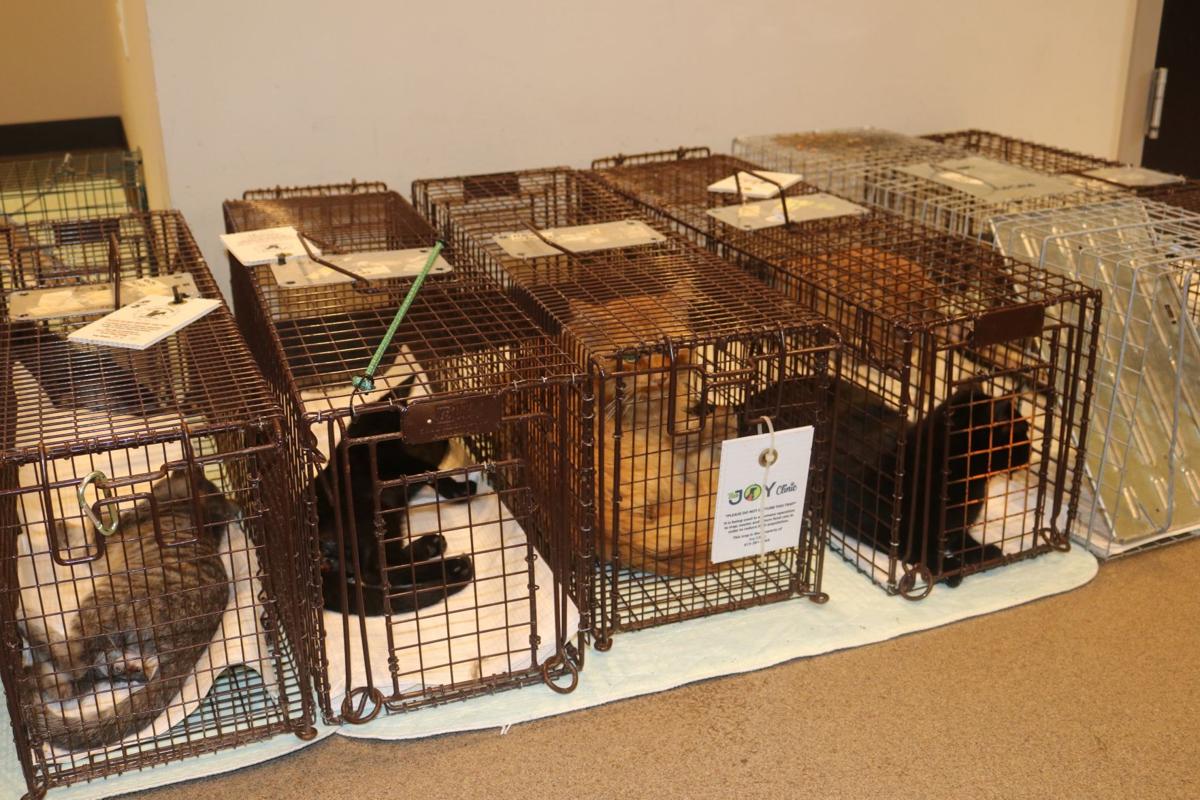 Trapped feral cats begin to stir from the anesthesia after their neuter/spay surgeries were complete on Tuesday at the JOY Clinic in Lebanon. Each of these cats were captured and will be returned to the colony where they were found but will now be unable to contribute to population spikes.

Richard Kowalski, a crew member at the JOY Clinic in Lebanon, delivers a trapped feral cat to the person picking it up following the surgery to have it neutered on Tuesday.

Trapped feral cats begin to stir from the anesthesia after their neuter/spay surgeries were complete on Tuesday at the JOY Clinic in Lebanon. Each of these cats were captured and will be returned to the colony where they were found but will now be unable to contribute to population spikes.

There’s an old saying that an ounce of prevention is worth a pound of cure. Some local animal conservationists are applying that logic to the area’s feral cat problem in hopes of thwarting growth before it gets out of hand.

Angela Chapman, director of New Leash on Life, said it’s not a problem that will ever completely go away, but without the mitigating factors like the assisted trapping and spay/neuter programs her clinic offers, things could be a lot worse.

What New Leash on Life does through its JOY Clinic is offer spay and neuter services for all outdoor cats, even if they aren’t feral.

Chapman said that in a given year, they fix anywhere from 2,500-3,500 cats. Those cats are brought in by volunteers and residents alike, some of which are more experienced trappers and others who are just concerned for the cats.

Since the clinic only offers the service Monday through Wednesday, it encourages trappings to take place in a comparable time table. Chapman said this is why they don’t set out traps on Thursdays or Fridays, because they don’t want the cats trapped that long, it will cause distress.

If a resident realizes a feral colony is populating near their home, they can request to borrow a trap from the JOY Clinic and attempt to trap the cats themselves. However, if a person doesn’t feel comfortable trapping the cats alone, there are volunteers with more experience who are willing to go out and assist. One of those volunteers is Donna Russell.

Russell had an extensive background in the medical field, but has rededicated her life to helping these animals. She said she uses the knowledge from her previous work to optimize her results with the feral cats. “I want an assessment with everything I do,” Russell said.

For her, anything short of effective number control, is a waste of time. “These can re-litter in just a couple of months, so if you only spay/neuter three to five cats, their population can be right back at problematic levels, very quickly.”

For her, it’s a formulaic race against the clock, and while it’s challenging, it’s her passion.

Russell doesn’t live in Wilson County, but she does come here to help with trappings often. She’s been doing some work in Watertown lately, although she didn’t want to disclose where.

“When people find out about feral colonies, some will actually just drop off strays. It’s horrible,” she said, especially since New Leash on Life and the JOY Clinic have the services available that they do to assist with these cats.

Russell is hardly the only out-of-towner participating in the program. At the pick-up hour on Tuesday, when the cats’ surgeries were complete and the trappers returned for them, several of those picking up animals were from places outside Wilson County.

Pamela Dies of Carthage said they first heard of the program when they adopted two cats from the adoption center. “Then we brought in cats that had been abandoned.”

Zach Turner of Old Hickory said that their neighbor left a cat after they moved that kept going into heat, so they borrowed a trap from the JOY Clinic. A volunteer came and set it up for them and they were able to trap a cat and bring it in to be neutered.

Turner said he was happy to help out, and that while the cat didn’t like the trap, it worked well. He added that it was important for him to help keep the cat out of the feral cat system, and so he was happy there is a program like the one at the JOY Clinic.

Chapman said this isn’t just a problem in Wilson County, and since cats don’t care about county lines, stopping overpopulation in one can help prevent bleedover to the next.

According to the New Leash on Life website, over 12 million dogs and cats are euthanized at shelters across the country. That equates to roughly 12,000 per hour. Neutering animals prevents carrying capacity breaches that lead to these high euthanization numbers. It also ensures the cats have better lives. And as for the kittens who can still be acclimated to human company, a foster program is in place to find them a new home.

New Leash on Life’s website dispels a myth about neutering inhibiting the quality of the animal’s life. “Pet’s urge to reproduce is an instinct. They don’t have a sexual identity as humans do so they won’t suffer an identity crisis or emotional trauma.”

Additional benefits for the neutered cats is that once a feral colony is stable, there isn’t an issue. They can solve rodent problems and largely stay away from humans, so a lot of people don’t mind having them, they just don’t want them to cause problems.

For more information, or to find out how to get involved, visit https://www.newleashonline.org, or call the JOY Clinic at 615-281-0664.