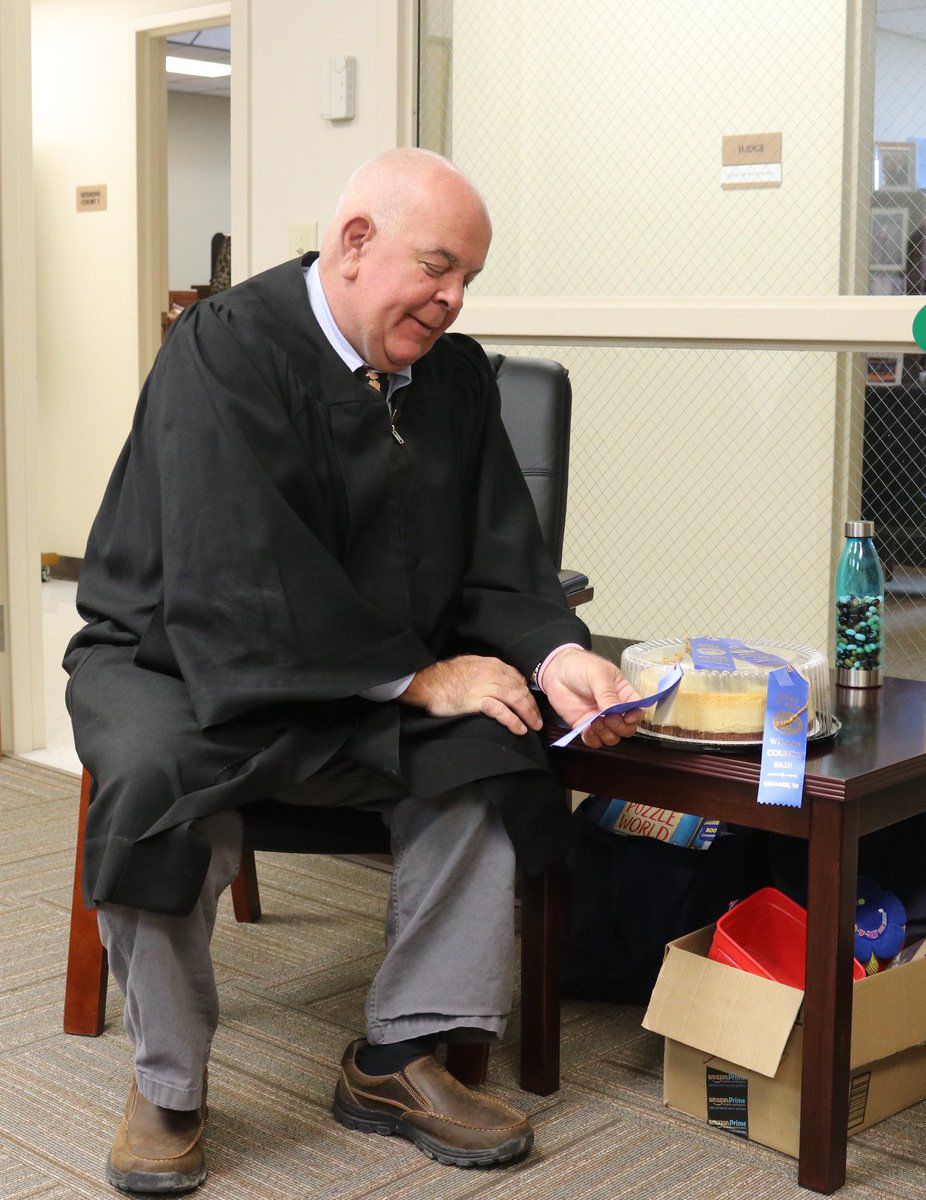 Wilson County Judge, Barry Tatum, discusses the blue ribbons he has received for his cheesecakes Monday in his office at the Wilson County Courthouse 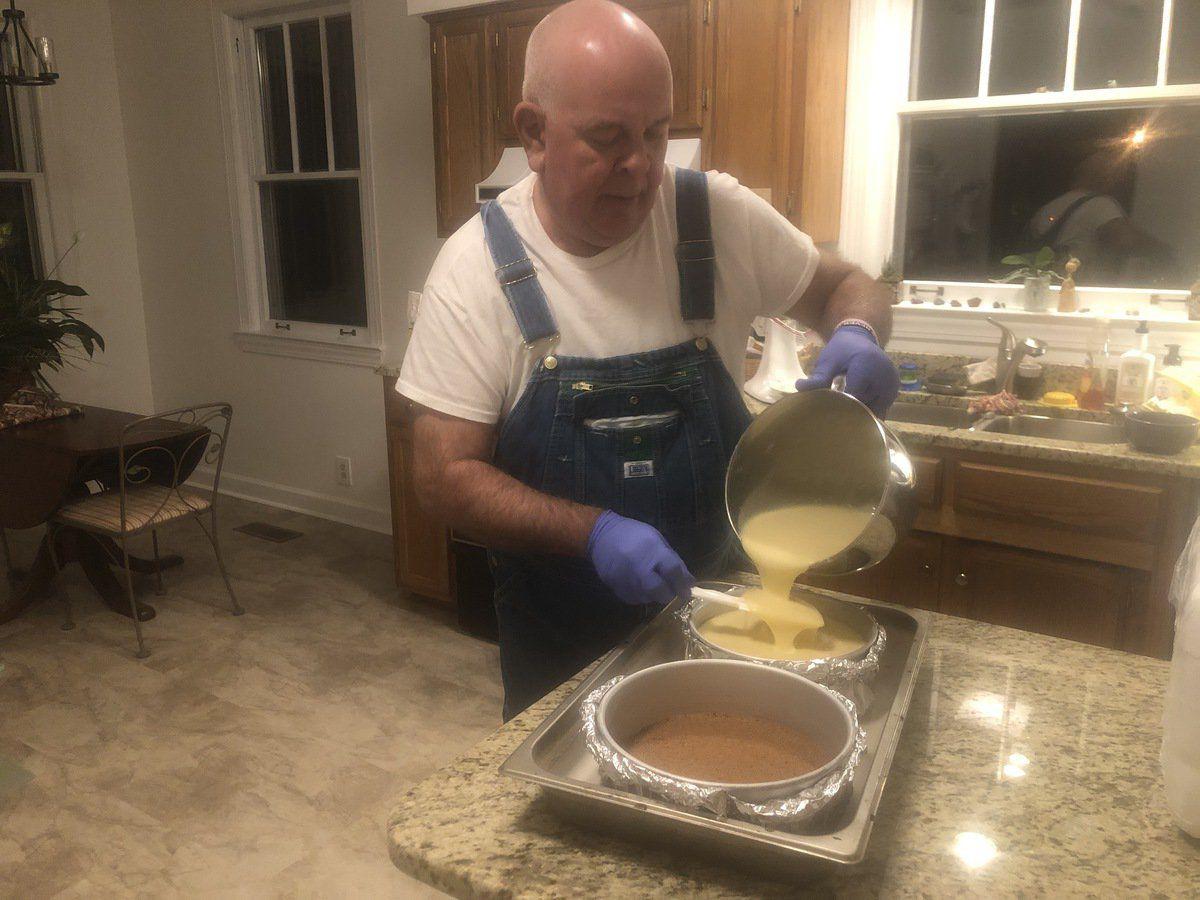 Wilson County Judge Barry Tatum, making a cheesecake in his kitchen, says he is in his best element when creating one of his cakes 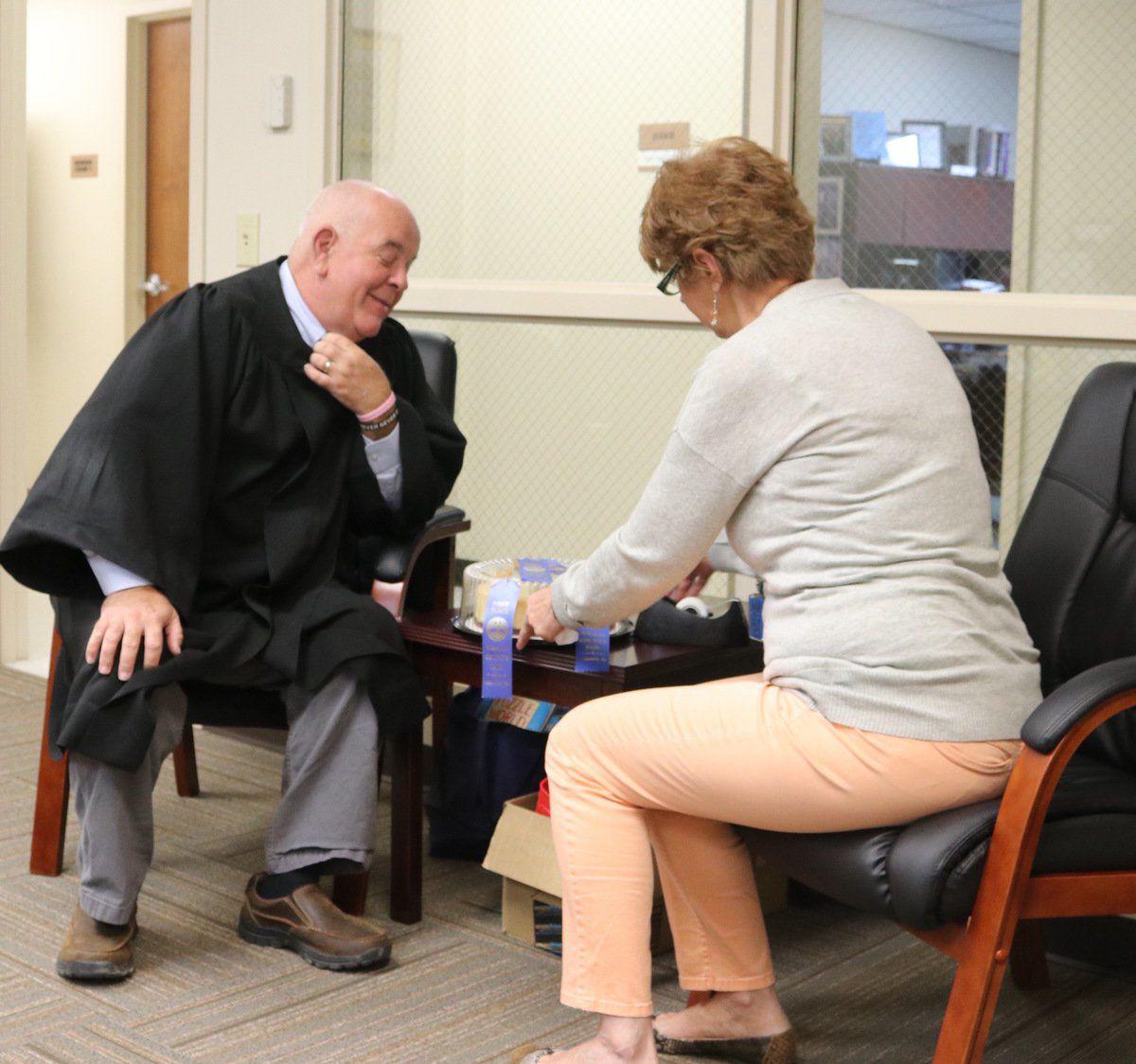 Minnie Wong, right, helps Judge Barry Tatum lay his blue ribbons for best cheesecake out to display Monday in his office at the Wilson County Court House. Tatum is known in the Wilson County fundraising world for bringing high dollar amounts in for his cheesecakes.

Wilson County Judge, Barry Tatum, discusses the blue ribbons he has received for his cheesecakes Monday in his office at the Wilson County Courthouse

Wilson County Judge Barry Tatum, making a cheesecake in his kitchen, says he is in his best element when creating one of his cakes

Minnie Wong, right, helps Judge Barry Tatum lay his blue ribbons for best cheesecake out to display Monday in his office at the Wilson County Court House. Tatum is known in the Wilson County fundraising world for bringing high dollar amounts in for his cheesecakes.

In the courtroom, he demands respect and, according to coworkers, usually gets it. Being a juvenile court judge can be stressful, which is why Wilson County Judge Barry Tatum has found a way to de-stress and enjoy life. He has discovered his love for baking.

Leaning back in his chair with one leg folded over the other, Tatum described how he first decided to start baking, specifically baking cheesecakes.

"My first wife and I were cleaning out the house of one of her aunts who had moved into an assisted living facility," said Tatum. "I came across this funny looking pan and asked my wife what it was."

Tatum said his wife explained to him that it was a springform pan. He learned soon after, the pan was specifically designed to make cheesecakes.

"I asked her family if I could keep it and they said yes," said Tatum. "I got a cheesecake recipe off the side of a package of Philadelphia cream cheese. Up until then, the only cheesecake I had ever eaten was a no-bake cheesecake from a kit."

After some time Tatum said he finally attempted to make his first cheesecake. He said it was OK, but he decided to tweak all future cakes in an attempt to make them the best.

"Over the years, I started tinkering with the recipe," said

Tatum. "I got more proficient. I put cinnamon in the gram cracker crust, it gives it a distinctive flavor."

Tatum said he does not mind disclosing the fact about the cinnamon in the crust because everyone knows it. His other baking secrets, however, he is keeping those close to the vest. For instance, he said he researched and asked questions from older bakers on how to keep his cheesecake from cracking when it comes out of the oven and begins the cooling down process. Tatum would not disclose what his secret is to keep the cakes from cracking.

"Anyone who makes cheesecakes knows they will crack oftentimes as they cool down," said Tatum. "After researching how to keep them from cracking, I might have one out of a hundred that will crack now."

Tatum's executive assistant, Minnie Wong, said she loves all of his cakes but his basic New York style is her favorite.

"He brought one in one time that was a Hawaiian cheesecake," said Wong. "It was so fresh and fruity. I just loved it."

Kim Stewart, a clerk for Tatum, said he brought in an orange-flavored cheesecake that he had created from the juice drink Tang. While Tatum and Wong said they did not care for that one as much, Stewart said she would gladly have another piece of it.

"I like tart food though," said Stewart. "I really loved that one."

Tatum's cheesecakes have become a legend in the fundraising world. Wilson County Help Center Director Ben Spicer said his cheesecake reputation is famous in Lebanon leading him and his board to try to acquire one for a fundraiser they had last month.

"Somebody on the board knew about his cheesecakes," said Spicer. "One of us approached him. Anyone who knows what Judge Tatum does knows he is the best at it."

While Tatum could not recall the highest amount one of his cheesecakes have brought in at a fundraiser, he agreed it could be safe to say it is in the hundreds of dollars.

"I remember one time I was curious about the amount a cake had brought in that I had given to a particular fundraiser," said Tatum. "The director of the fundraiser reluctantly told me it only brought in $12 or $13. It was all about supporting the cause though."

Tatum made a point to say he enjoys making his cakes mainly to wind down after a stressful day. He said many men cook and smoke meat for enjoyment, and his love of baking is no different from that.

"There are some days you leave work and you are emotionally exhausted and have nothing to show what you have done," said Tatum. "Making a cheesecake is like a craft, trying to improve on it and tinker with it. I have something to show for it at the end of the day."