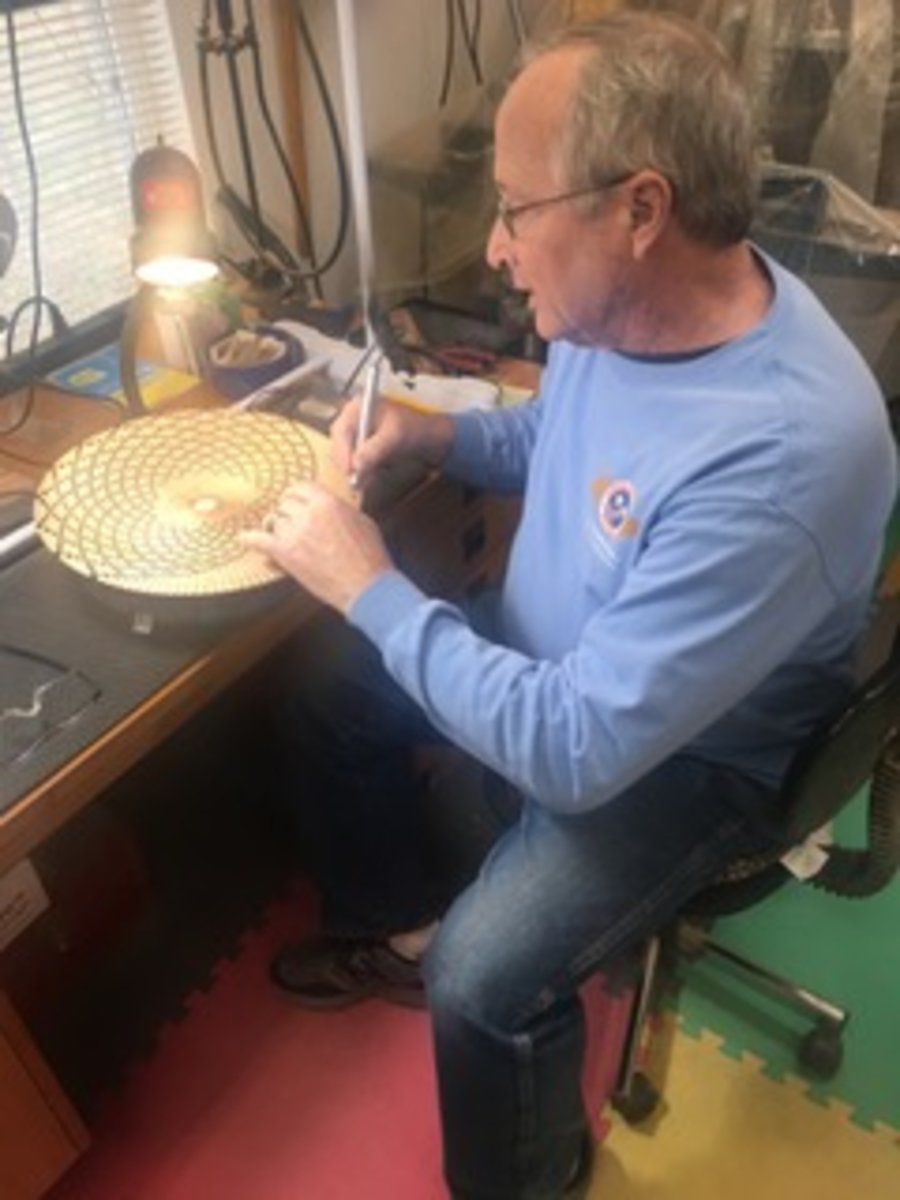 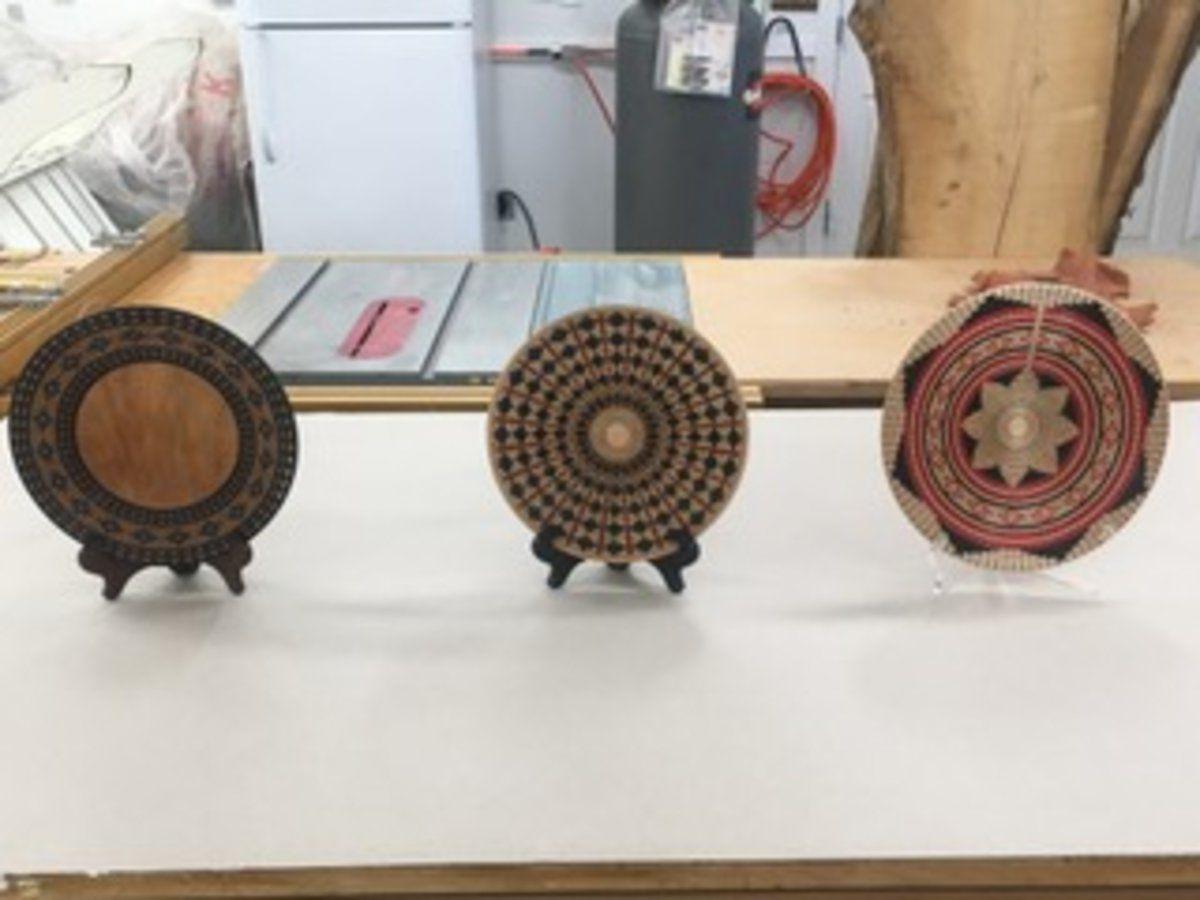 Brockett's work was selected by a jury of artists for display at the airport.

Brockett's work was selected by a jury of artists for display at the airport.

Woodturning artist Jeff Brockett spent decades becoming an expert on his craft, and his latest milestone positions 13 of his basket illusions on display at the Flying Solo Artist exhibit in the Nashville International Airport.

Beyond the security checkpoints but on the way to baggage claim, some of those leaving but especially those arriving in Nashville last month, this month or next month will notice an array of what might appear from a distance to be shallow bowls or plates embellished with eye-catching designs. These are, in fact, wooden pieces of art, deceptively turned on a lathe and burned with painstakingly precise designs.

Since 1996, the airport has held a quarterly, juried exhibition series in the most visible part of its secure terminal for some of Tennessee's most captivating art, dubbing it the Flying Solo Exhibition Series. Brockett's platters are the latest pieces to showcase in the series after having been judged against many other works by a panel of arbiters who opted to draw from Tennessee's uniquely deep pool of woodturning artists.

The juried exhibit requires all artists to formally apply in order for their works to be considered, and the panel picks a single artist for the exhibit. For Brockett, a minimum of 10 pieces were needed to fill the exhibit, and he contributed 13 in total, about eight of which are for sale -- the other five having already been sold prior to display. The price of a piece depends on size and design complexity, ranging anywhere from $100 to $800.

Brockett's pieces have been seen at the TEDx Studio, also called Studio 208, in downtown Nashville as well as several other juried exhibits whose processes were similar to the Flying Solo Exhibition Series. Among them were the Custom House's Best of Tennessee Exhibit in Clarksville for which he won the Merit Award and Centennial Arts's Best in Middle Tennessee Exhibit.

Brockett's concentration as a woodturner is on basket illusions, a specific design pattern that woodturners sometimes employ to illustrate seemingly impossibly intricate designs. It's based on Native American basket weaving, which involved exceptionally creative patterns. Lincoln Seltzer was the first known woodturner to imitate that creative process on wooden platters, so the history of these kinds of designs dates back hundreds of years even through Portuguese colonization.

The expertise of woodturning art is discerned based on the quality of the woodwork, the thematic imagery implied by the colors applied and how the platter feels in one's hands. Mastery of the craft is also partly measured by the lack of errant marks and smudges, too, but Brockett further distinguishes his work a bit by deliberately endeavoring to make it as impossible as he can for even an astute observer to figure out how he the piece in question was lathed.

"I like to really look at the back of pieces," Brockett said. "I want the person that picks that piece up to look at it and say, 'How in the world did he put that on the lathe and turn it?' I've gone from a satin finish to a gloss finish because I think gloss looks better on these pieces because they're more art than functional."

Woodturning is a craft that produces functional pieces with purpose like doorknobs or tool handles or lamps, but the art form associated with it is widely popular the world over. In the U.S., the American Association of Woodturners boasts of multiple chapters in each state. In Tennessee alone, there are 12 official chapters, including the Tennessee Association of Woodturners and Duck River Woodturners, located in Brentwood and Columbia respectively. Brockett is member to both of them among other local woodturning organizations.

"There's three or four of the top woodturners in the world that live within 15 minutes of here," Brockett said, referring to his home in northern Mt. Juliet. "You've got John Jordan who lives down in Cane Ridge. If you're going to say who's the top 10 people in the world, he's one of them. Then, Pat Matranga lives in Mt. Juliet not too far from here. John Lucas lives over in Baxter."

For Brockett, woodturning art is a retirement hobby. He worked for Target most of his adult life, managing and even launching stores, and through woodturning, he channeled a natural affinity for art shared by his wife and daughter. His wife is a stained-glass artist, and his daughter teaches art at the collegiate level in Texas.