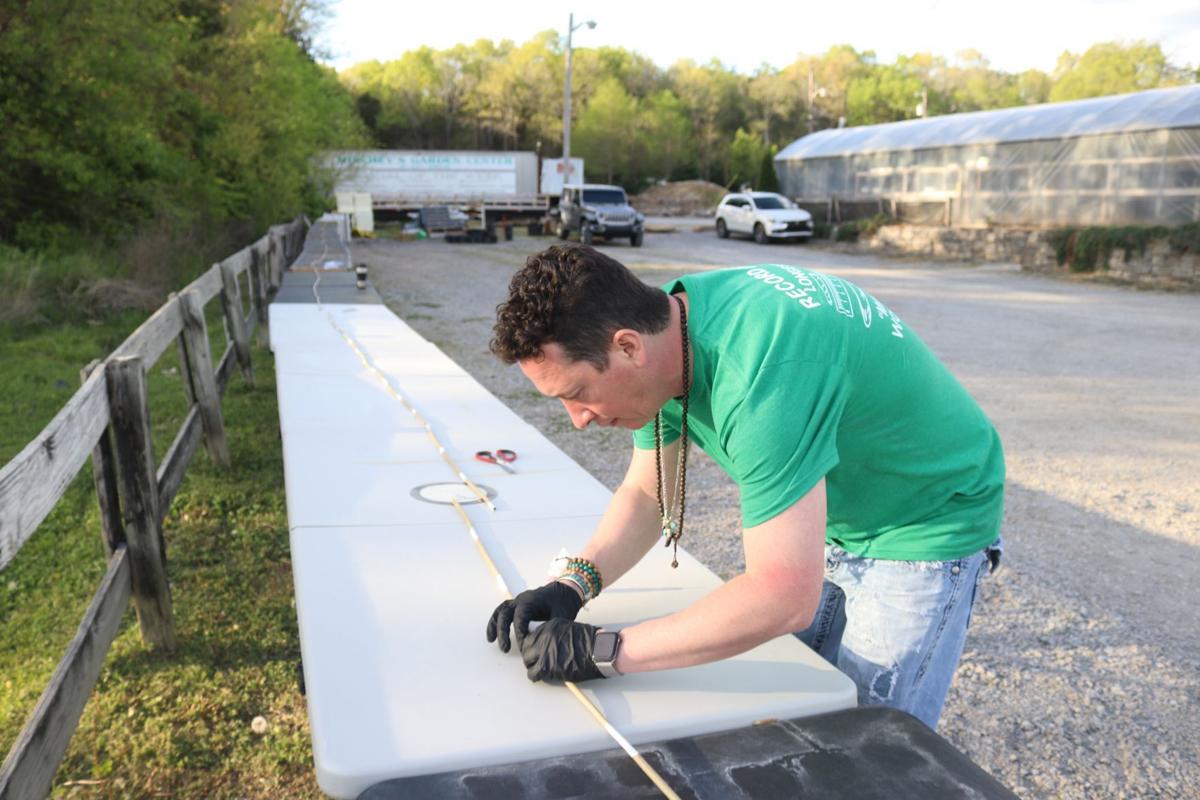 Heath Scott, owner of 7 Point Apothecary in Mt. Juliet, meticulously connects sections of his 150-foot hemp joint on Tuesday at his farm on Lebanon Road. Scott rolled the joint to celebrate 4/20 and promote cannabis legalization in Tennessee. 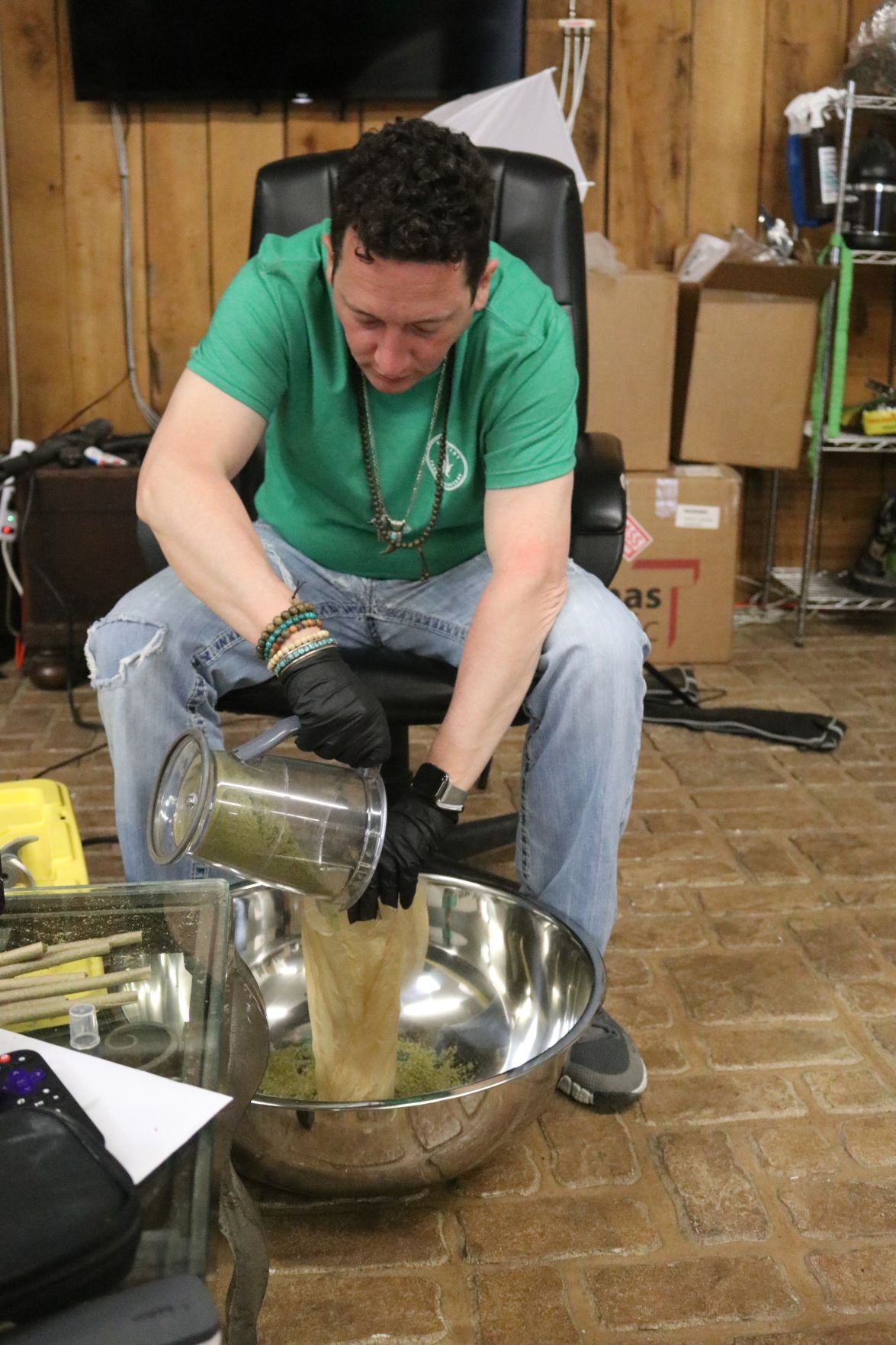 Scott uses a blender to turn the hemp into something rollable.

Heath Scott, owner of 7 Point Apothecary in Mt. Juliet, meticulously connects sections of his 150-foot hemp joint on Tuesday at his farm on Lebanon Road. Scott rolled the joint to celebrate 4/20 and promote cannabis legalization in Tennessee.

Scott uses a blender to turn the hemp into something rollable.

For one man in Mt. Juliet, Tuesday was a day to celebrate, as he marked 4/20 in true southern style, by rolling the world’s longest joint.

Heath Scott runs 7 Point Farm and Apothecary, a hemp farm and retailer in Mt. Juliet. He set out to roll the 150-foot joint last week, dividing the work in 12-foot increments.

The joint contained hemp strains of T1, Lifter and Suver Haze. Strain refers to genetic variance. While each strain possesses different characteristics and attributes, they are all the same species.

Although the record will not be recorded in Guinness, Leafly, a prominent cannabis publication, collects data on records like these. According to Leafly, the world record for the longest joint was 106 feet. Scott blew past this length earlier in the day Tuesday, but remained determined to hit the 150-foot mark, “if it took him till nightfall.”

Inspiration for the event has been brewing inside Scott, who said he’s been interested in the hemp plant since a young age.

“It started when I was prescribed medication for pain and found out that a plant did better for me than the medicine from the doctor,” Scott said.

Scott said he then started self-medicating. The hemp farmer suffers from tachycardia, but says that the cannabidiol, or CBD, helps offset the anxiety which causes his conditions to worsen.

While Scott said that he wanted to use the occasion as a means to bring awareness to what he says is the need for marijuana legalization in Tennessee and the country as a whole.

Scott describes himself as a “sample guy,” and said that he farms hemp because he wants to help people.

“You come to me and tell me what’s wrong.” he said. “I’m going to send you out with a few different products so that you can find out what works best for you.”

Scott isn’t the only hemp purveyor in Wilson County. Philip Donnell runs an operation in Lebanon called Healing Hemp Farms. Scott and his mother, Sandy Donnell, are both involved. He said that he’s happy he can use his farm to grow something that helps people and was delighted to be part of the celebration at 7 Point Apothecary on Tuesday.

Hemp differs from its cannabis cousin, marijuana, in that it contains 0.35 or less THC, the psychoactive component that causes the “high” associated with smoking. This distinction is important for defining legal thresholds in states around the country, where CBD is legal but THC is not.

April 20 or 4/20 is considered a holiday for many users of cannabis. The original of the holiday is hazy, but the generally accepted story is that five high school students in San Rafael, California discovered a treasure map they believe led to an abandoned cannabis crop. Everyday the students would gather around the Louis Pasteur statue on their school’s campus at 4:20 p.m.

The first mention of 4/20 as a holiday appeared in May of 1991 in an edition of High Times. Steven Hager, the journalist who covered the story, attributed the popularity of the phrase to Grateful Dead culture. One of the San Rafael students became a roadie for the band and would regularly call smoke sessions at 4:20 p.m.

As of 2021, 17 states and the District of Columbia have legalized recreational cannabis use for adults. Several other states have decriminalized possession.

The few remaining holdouts are largely concentrated in the Southeast with Kentucky, Tennessee, North and South Carolina, Georgia and Alabama all having no current programs for legal THC use.