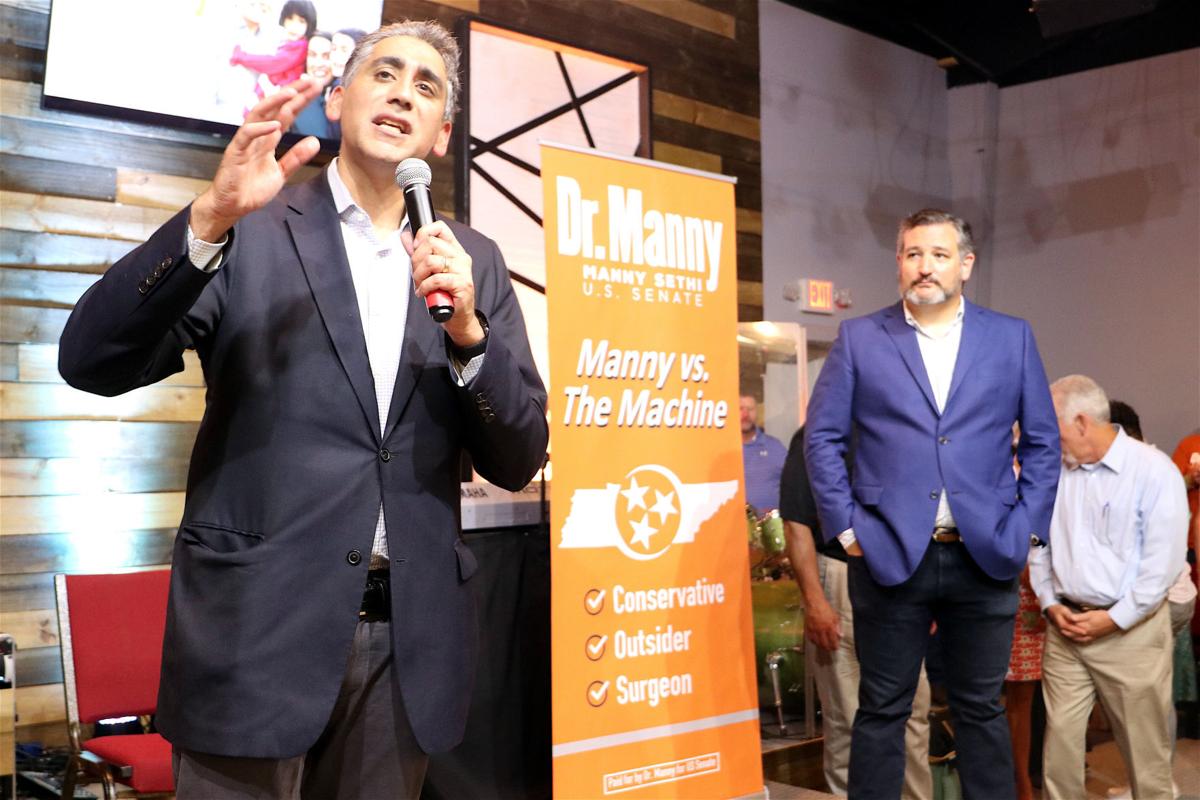 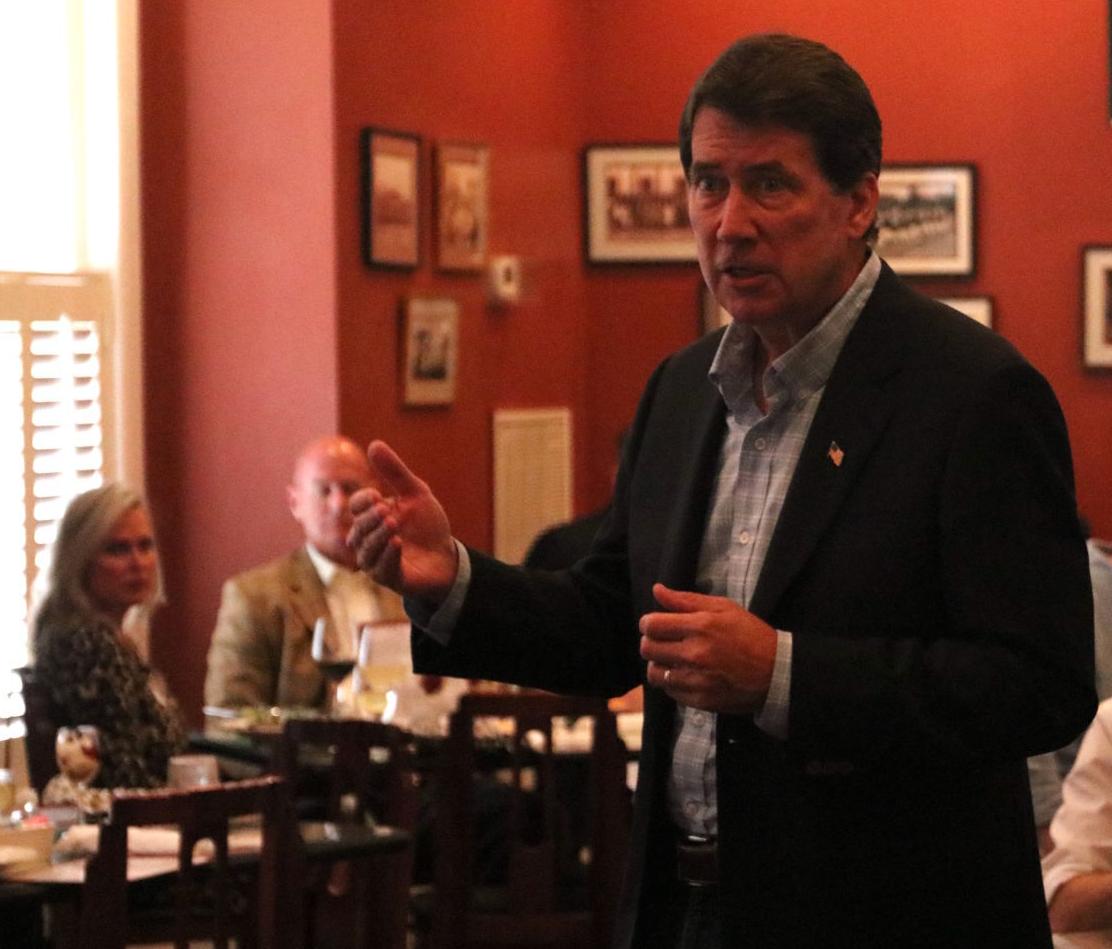 U.S. Senate candidate Bill Hagerty addresses supporters during a dinner at Sammy B’s Restaurant and Catering in Lebanon on Saturday.

U.S. Senate candidate Bill Hagerty addresses supporters during a dinner at Sammy B’s Restaurant and Catering in Lebanon on Saturday.

What many expected to be a runaway Republican Senate primary could come down to the wire, with former U.S. Ambassador to Japan Bill Hagerty and orthopedic trauma surgeon Manny Sethi both gaining momentum in Wilson County.

Both candidates traveled to Wilson County over the weekend to make another pitch to voters ahead of the Aug. 6 election. Sethi and Cruz held a town hall in Mt. Juliet on Friday, while Hagerty met with supporters over dinner in Lebanon on Saturday.

“I’ve been watching this campaign for some time,” Cruz said of his decision to endorse Sethi. “I’ve seen people that I like and respect get engaged … I started looking at this race, I started looking at what Dr. Manny was saying and you know, you can tell a lot … the Washington swamp, they tell you who they’re afraid of. You look at all the money pouring into Tennessee just coming after him hard, and that’s a real indication they don’t want someone who will rock the boat.”

Sethi’s position as a political outsider and Hagerty’s experience in the Trump White House have come to define the race, as the two candidates share largely similar platforms. Building a wall at the Mexican border, confirming originalist judges and repealing the Affordable Care Act are among their positions.

“I’d say the greatest concern of all is that they have a senator that’s going to stand with President Trump,” Hagerty said. “They’re sick and tired of seeing weak-kneed Republicans who turn on President Trump and don’t stand for our conservative values … Tennesseans are extremely concerned about jobs and the economy. They want to see us get back to work. I’m a business person, I understand how our economy works. That’s the reason President Trump has already put me back to work on the Economic Recovery Task Force, to help America and help Tennessee get back to work.”

Sethi said he has heard similar concerns from voters on the campaign trail about longtime politicians, along with their thoughts on health care and the economy.

“The challenges I hear are, look, we need to get government out of our way, we need to deregulate,” he said. “In rural Tennessee, I hear so repeatedly, and this is where we’ve had this coronavirus pandemic and kids aren’t going to school, they don’t have rural broadband. That’s a major issue. This opioid crisis continues to be an issue, where we have a one size fits all federal solution that we need to take on.”

COVID-19 is likely to remain at the forefront of the national conversation in November, and Cruz said he wants to see steps taken to prevent it from spreading without further shutdowns.

“We can’t just shut down our economy and destroy every small business in America in perpetuity,” he said. ”When you have 40 million people unemployed, that has real public health consequences too. That has more mental health challenges, more depression, more suicides, more substance abuse, more alcohol abuse. We’ve got to do both, which is keep people safe and protect against this virus, but also allow small businesses to reopen and to hire people. Because the people of Tennessee, they want to work, they want to provide for their families.”

Cruz said Sethi is qualified to address the COVID-19 pandemic because of his medical career, emphasizing a focus on scientific data.

“Dr. Manny is a world-renowned surgeon,” he said. “He believes in science, he believes in data and he wants to keep people safe. But at the same time, he’s not going to give in to this partisan political agenda of shut everything down forever and destroy people’s lives and livelihoods. There’s got to be a reasonable balance, and I think that’s where most Americans are.”

Sethi said his events offer face coverings and hand sanitizer to attendees while encouraging social distancing, but Music City Baptist Church saw an overflow in capacity during his town hall. Many attendees at both candidates’ events opted not to wear masks.

“It’s an individual choice, and I think that’s important to recognize in this,” Sethi said. “I don’t think government should be mandating masks for anything, and at our events we try to encourage that … I think it’s safe.”

According to Hagerty, there are also 97 potential vaccines for COVID-19 going through the FDA approval process, with the goal of making the first effective treatment widely available.

“We have streamlined the approval process dramatically,” he said. “At the same time, we’ve built manufacturing capacity so we’re going to be ready to produce millions of doses of the first vaccine that gets through the FDA approval process.”

Hagerty’s backers say his involvement in groups ranging from the Recovery Task Force to his investment firm gives him experience in several areas. State Rep. Clark Boyd, who endorsed Hagerty on July 9, said he made his decision after taking the candidate on a tour of the county.

“He talked to the CEO of the hospital here locally and the CEO from Nashville that came out here,” he said. “As he was talking about health care, he truly understood the health care system in this country … he had a very detailed knowledge of that. When we went to talk to the sheriff, he wasn’t just saying ‘I’m tough on crime.’ When he was the ambassador to Japan, he had a Drug Enforcement Administration task force underneath him and he understood that Chinese fentanyl was being shipped out of the country and shipped to America.”

Both candidates are hoping support from figures like Boyd will help them over the finish line, with the primary election set for Aug. 6.

The race has also entered national focus, with Sens. Marsha Blackburn and Tom Cotton recently backing Hagerty. Cruz is the second sitting senator to endorse Sethi after Sen. Ron Paul threw his support behind the candidate in June.

Early voting in Wilson County will continue through Saturday, and the winner of the Republican primary will face the Democratic Party’s nominee in the Nov. 3 general election. Iraq War veteran and attorney James Mackler is currently the leading Democratic candidate.