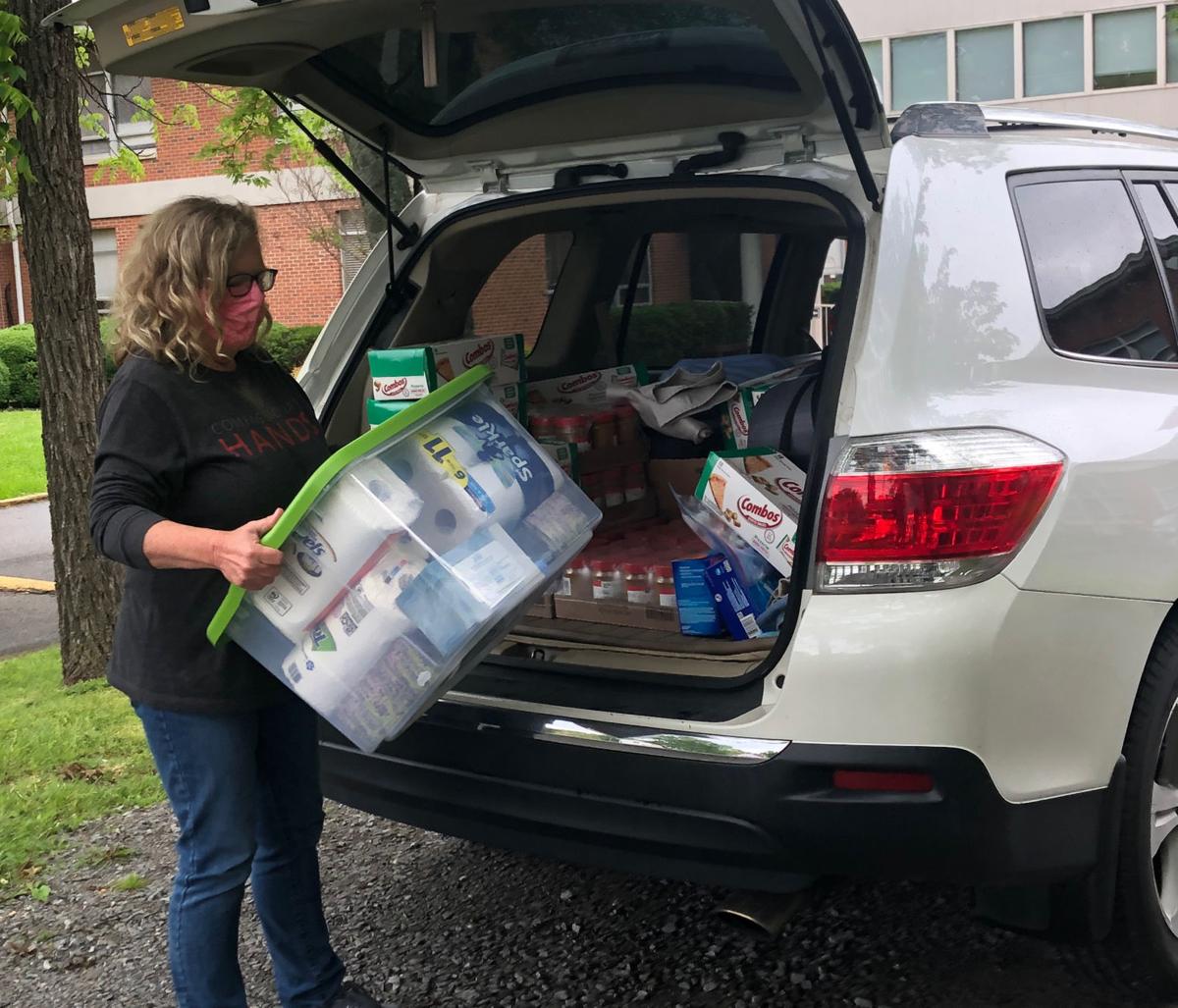 Shelia Weathers, ministry development director for Compassionate Hands, stores a selection of donated items from Cross Point Church of Mt. Juliet as part of a coordinated relief effort for COVID-19. 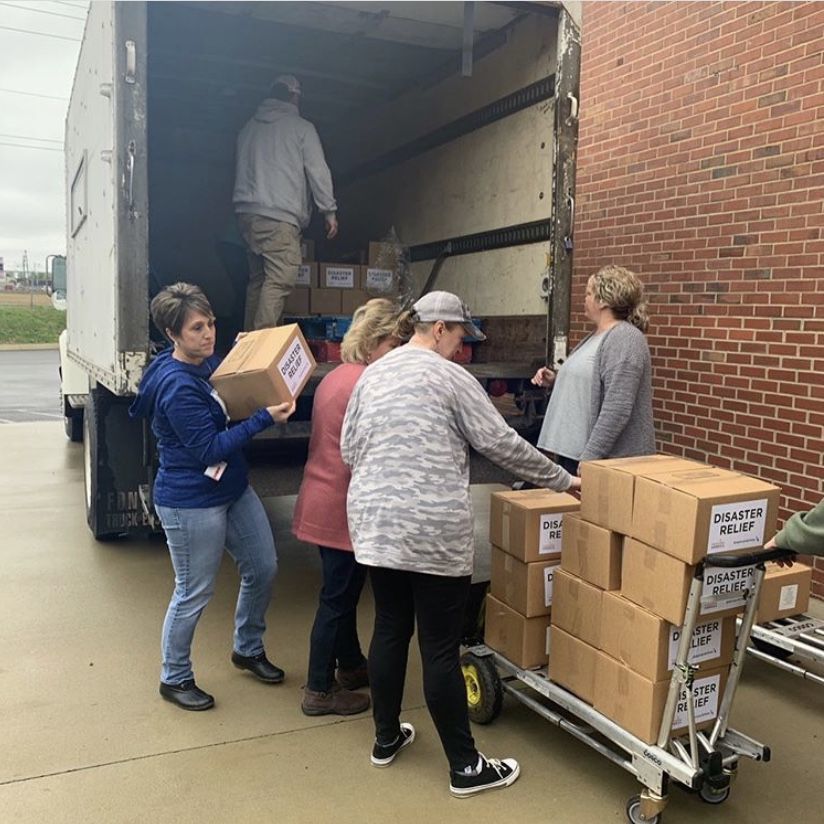 Volunteers collect and store items for Wilson County Schools’ food distribution efforts, which began after the March 3 tornado and have continued into May through the Family Resource Center’s food assistance services.

Shelia Weathers, ministry development director for Compassionate Hands, stores a selection of donated items from Cross Point Church of Mt. Juliet as part of a coordinated relief effort for COVID-19.

Volunteers collect and store items for Wilson County Schools’ food distribution efforts, which began after the March 3 tornado and have continued into May through the Family Resource Center’s food assistance services.

Wilson County’s homeless and low-income populations continue struggling with the impact of COVID-19, but area nonprofits, churches and schools are coming together to help.

Compassionate Hands has been accepting donations from several of those groups, and is providing weekly meals for homeless people from 5:30-6:30 p.m. on Fridays at the Spain House.

“We’re finding more people are coming now, and the main thing is that some of them had jobs and could afford a motel room but now they can’t,” Ministry Development Director Shelia Weathers said. “The other thing we’ve been finding is that a lot of our friends live out around 231 where they could go into Burger King and sit for about an hour, or buy a biscuit when they could afford it. But a lot of dining areas still haven’t opened and they aren’t being allowed to come up to the drive-through on foot.”

Weathers said the meal distributions can feed about 25 people per week, and volunteers bring leftover food to those in need. The organization is also offering clothing, tents, tarps and more to go with the meals.

“I think there’s been more need for tents and sleeping bags, just the things they need to live outdoors, because they can’t afford a motel room,” she said. “We’ve given out a lot of shoes too, because when shoes get wet they get really wet. Bicycles are another one, and we’ve given out four or five.”

Another issue Weathers identified was the public library closures, which have prevented people from going online to access resources or check on stimulus funds.

“We have a mailbox at the Spain House so we can help people collect their stimulus checks,” she said. “We have one lady and guy that live in their car, and when I met them with the check she had tears in her eyes … she said, ‘I’m going to pay my car payment before they pick it up,’ and she was so excited you would have thought she won the lottery.”

Routine payments like that have become more difficult for families affected by the virus, and the Mt. Juliet Help Center is working with many of them on covering utilities.

“In March and April, we had a huge increase in first-time clients,” Director Carolyn Smith said. “In April, our payment amount for utilities almost doubled from March.”

Smith said the organization also provides food assistance, but that they have not seen an increase in families seeking that service.

“I think the stimulus checks have affected the requests for food help,” she said. “But since a lot of people got them recently and they’re still coming in, I don’t think they had much impact on utility payments through April.”

Wilson County Schools is also helping children and families with food through its Family Resource Center, which has continued to connect with those in need and provide donated items.

“You’ve got your food, toiletries and laundry detergent — those are the three most popular items through our facility,” Wilson County Schools Public Information Officer Bart Barker said. “For some families, these kinds of things can be costly, and those are the type of items we see the most need for.”

Barker said the facility has seen a slight increase in families served since the pandemic, but has generally continued to work with those already identified as low-income.

“The main pipeline that helps us determine what people’s needs are comes from school counselors and administrators,” he said. “They work closely with the Family Resource Center to let them know what families are in dire need, and that continues throughout the year.”

As the school system heads into the summer, officials are also finalizing a schedule for Wilson on Wheels, a food bus that travels through the county to conduct distributions.

The Salvation of Army of Wilson County is on the road as well, going from neighborhood to neighborhood delivering a variety of supplies each week in partnership with the Lebanon Special School District.

“We’ve been trying to see what the other needs are besides food, because many people in need right now are being given more in food stamps than they were before,” Marie Wulfing, the Salvation Army of Wilson County’s COVID-19 response coordinator, said. “Our goal is to find the neediest people who have not been able to access unemployment benefits.”

Wulfing said the Salvation Army has identified small business owners as a particularly important group to reach, because their self-employment prevents them from filing for benefits.

“The other need I see when we’re going door-to-door is delivery or buying food for some of the elderly,” she said. “A lot of them are shut in their homes right now because they’re at risk for the virus, and we’d love to find people willing to shop for someone and bring them food.”

Salvation Army volunteers are also planning to distribute Kroger food cards next month, along with expanding the organization’s after-school program.

“We’re adding in a complete tutoring section so these kids are getting math and English skills, and not losing them as they head into next school year,” Wulfing said. “We also take kids to the park and other activities like that … they say they’ve run out of bicycles at most stores because parents don’t know what to do with their kids, and we want to be able to help the kids with academics and socialization while supporting the parents emotionally.”

Nonprofits, churches and school initiatives across the county continue to accept donations for those in need. Those interested in helping are asked to call ahead and arrange a delivery due to COVID-19 concerns.

“What I really want to pinpoint is how everybody is coming together,” Weathers said. “It’s not just Compassionate Hands, we have all these churches and other outreach programs working to help the people in need. It’s Wilson County Strong, is what it is.”