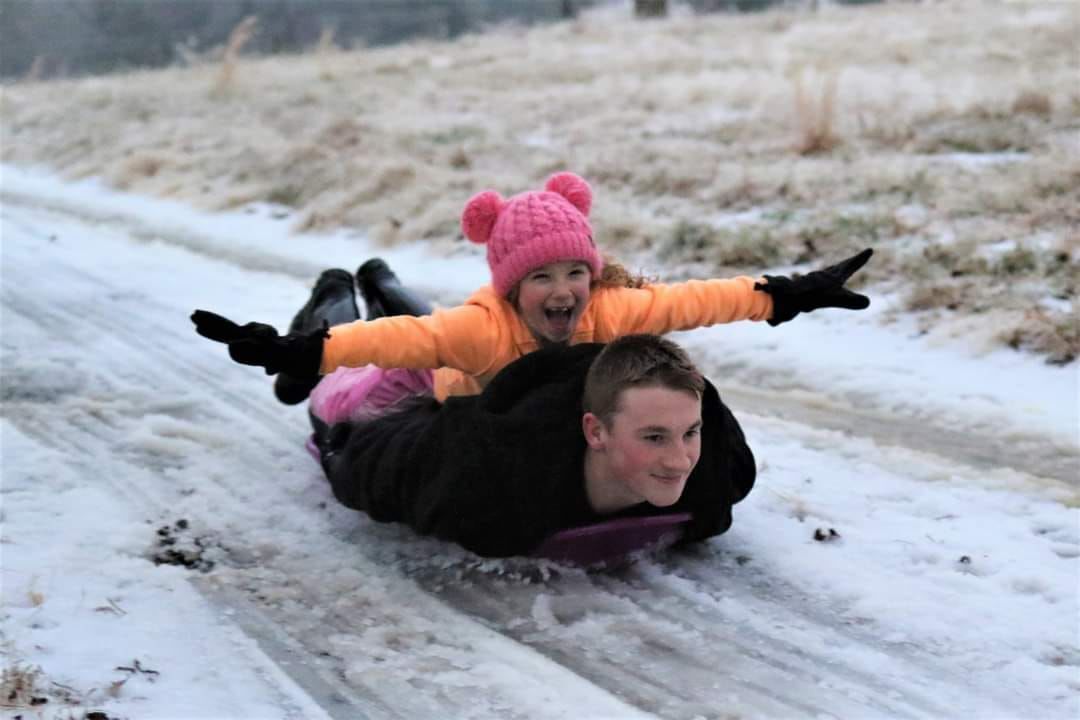 Tucker Vaughn, 16, and his sister Shayna, 8, sled down their neighbor’s driveway in Watertown on Wednesday. Vickie Vaughn took this photo of her children and posted it on the Lebanon Democrat’s Facebook page, where dozens of other submitted photos can be seen. 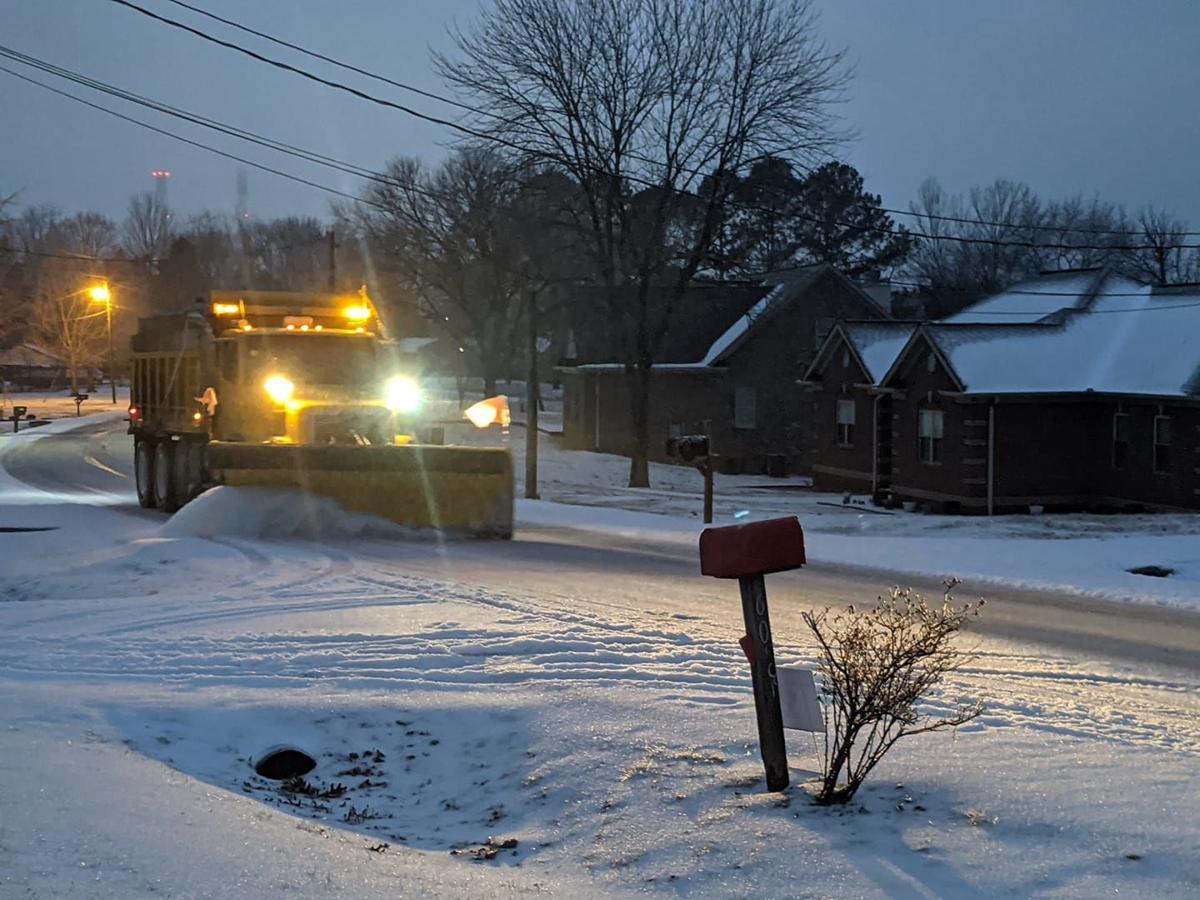 Jonathan Binion took this photo of a plow on Bluewater Drive in Lebanon on Monday evening. 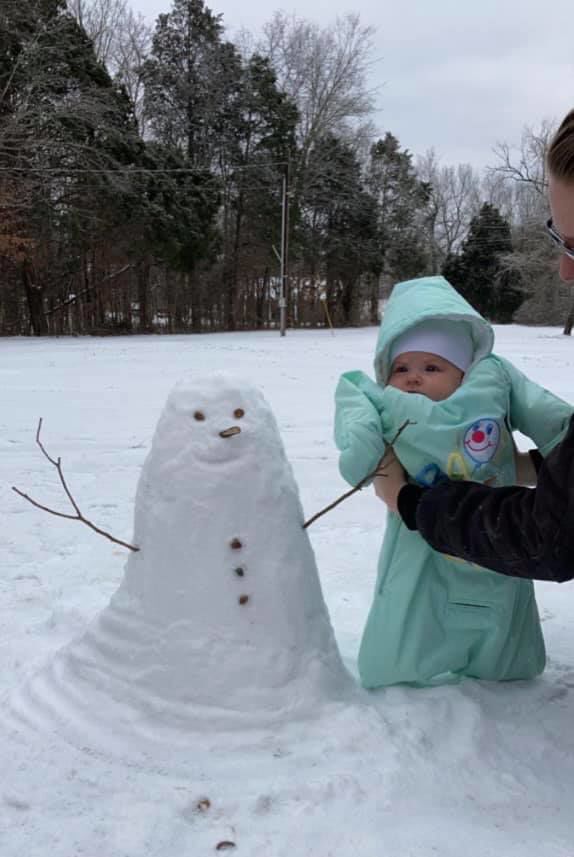 Sloane Buck, just 3 months old, gets her first look at snow in Mt. Juliet on Wednesday in this photo posted to the Lebanon Democrat’s Facebook page by Elizabeth Buck.

Tucker Vaughn, 16, and his sister Shayna, 8, sled down their neighbor’s driveway in Watertown on Wednesday. Vickie Vaughn took this photo of her children and posted it on the Lebanon Democrat’s Facebook page, where dozens of other submitted photos can be seen.

Jonathan Binion took this photo of a plow on Bluewater Drive in Lebanon on Monday evening.

Sloane Buck, just 3 months old, gets her first look at snow in Mt. Juliet on Wednesday in this photo posted to the Lebanon Democrat’s Facebook page by Elizabeth Buck.

Most of Wilson County continued to hunker down this week, with temperatures remaining below freezing, school canceled, businesses closed, and many secondary roads hazardous to drive on. Then, more snow was predicted into this evening.

According to Sgt. PJ Hardy with Lebanon Police Department, “there were no major crashes or injuries. There were lots of motorist assists, but no major damage to structures reported.”

Hardy warned everyone to stay safe and get ready for “Round 3,” as weather forecasts for Wednesday looked grim.

Cumberland University opted to remain virtual for the rest of the week, keeping the campus dining hall opened on a limited basis. Local schools remained closed through the end of the week.

Lebanon city offices were also closed, although many employees were still working. Mayor Rick Bell said, “I want to thank the city employees who have been out there working to keep the roads clear and us safe, specifically the street, police and fire departments.”

The city’s sanitation collection routes were temporarily suspended. In a meeting with department heads Wednesday, the mayor decided to resume collection Thursday/keep collection suspended at least another day.

Nationally, much of the country was still in the grip of the series of storms. Utility crews raced Wednesday to restore power to nearly 3.4 million customers around the U.S. without electricity. even as another blast of ice and snow threatened to sow more chaos.

The latest storm front was expected to bring more hardship to states that are unaccustomed to such frigid weather — parts of Texas, Arkansas and the Lower Mississippi Valley — before moving into the Northeast today.

“There’s really no letup to some of the misery people are feeling across that area,” said Bob Oravec, lead forecaster with the National Weather Service, referring to Texas.

More than 100 million people live in areas covered by some type of winter weather warning, watch or advisory, the weather service said.

More than two dozen people have died in the extreme weather this week, some while struggling to find warmth inside their homes. In the Houston area, one family succumbed to carbon monoxide from car exhaust in their garage. Another perished as they used a fireplace to keep warm.

Record low temperatures were reported in city after city. Scientists say the polar vortex, a weather pattern that usually keeps to the Arctic, is increasingly spilling into lower latitudes and sticking around longer, and global warming caused by humans is partly responsible.

Utilities from Minnesota to Texas and Mississippi have implemented rolling blackouts to ease the burden on power grids straining to meet extreme demand for heat and electricity.

More than 3 million customers remained without power in Texas, Louisiana and Mississippi, more than 200,000 more in four Appalachian states, and nearly that many in the Pacific Northwest, according to poweroutage.us, which tracks utility outage reports.

The Tennessee Valley Authority, which serves Wilson County through Middle Tennesse Electric, said Wednesday that its customers were not a risk of losing power.

Aaron Melda, senior vice president for transmission and power supply at the utility, said, We’ve been able to maintain 100% reliability” and that there was a “very, very low probability” of any blackouts.

Speaking to reporters on a video conference, Melda said systemwide demand has peaked at 28,500 megawatts this week, well below TVA’s capacity of about 36,000 megawatts. In contrast, the entity that controls Texas’ power grid, saw peak demand above its capacity, which is a contributing factor to that state’s continuing blackouts.

TVA also has a more diversified supply, including coal, natural gas, nuclear, hydro and renewables, and it has the capability to bring more power online should it be needed, can cut power to some big industrial users, and can draw on neighboring power grids, Melda said.

The worst U.S. power outages by far have been in Texas, where officials requested 60 generators from the Federal Emergency Management Agency and planned to prioritize hospitals and nursing homes. The state opened 35 shelters to more than 1,000 occupants, the agency said.

Texas’ power grid manager, the Electric Reliability Council of Texas, said electricity said about 3 million homes and businesses remained without power as of midday Wednesday. Officials did not know when power would be restored, but ERCOT President Bill Magness said he hoped many customers would see at least partial service restored by later Wednesday or Thursday.

Dashawn Walker, 33, was thrilled to find the power back on in his Dallas apartment Wednesday. He stayed at a suburban hotel Tuesday night after being without power since Sunday, but said he was charged $474 for one night.

“It’s crazy,” Walker said. “I mean why would y’all go up on the hotels in the middle of a crisis?”

Oklahoma’s largest electric utility reported no outages Wednesday, a day after rolling blackouts in and around Oklahoma City stopped electric-powered space heaters, furnaces and lights in minus-8 degree weather. But Oklahoma Gas & Electric warned customers of the potential for more short-term service interruptions due to the extreme cold and high demand for natural gas.

Nebraska also avoided another round of rolling power outages as subzero temperatures started to ease.

Entergy imposed rolling blackouts Tuesday night in Arkansas, Louisiana, Mississippi and Southeast Texas at the direction of its grid manager, the Midcontinent Independent System Operator, “as a last resort and in order to prevent more extensive, prolonged power outages,” according to a statement from the New Orleans-based utility.

The Southwest Power Pool, a group of utilities covering 14 states, said the blackouts were “a last resort to preserve the reliability of the electric system as a whole.”

The weather also caused major disruptions to water systems in the Texas cities of Houston, Fort Worth, Galveston, Corpus Christi and in Memphis, Tennessee, and Shreveport, Louisiana, where city fire trucks delivered water to several hospitals aand bottled water was being brought in for patients and staff, KSLA News reported. In Houston, residents were told to boil their water — if they had power to do so — because of a major drop in water pressure linked to the weather.

In Abilene, Texas, firefighters were hampered by low water pressure as they tried to extinguish a house fire this week, the Abilene Reporter News reported.

“They had to watch that house burn,” City Manager Robert Hanna said Tuesday at a news conference.

Travel remains ill-advised in much of the United States, with roadways treacherous and thousands of flights canceled. Many school systems delayed or canceled face-to-face classes.

But even staying home can be hazardous in places without power.

Authorities said a fire that killed three young children and their grandmother in the Houston area likely was caused by the fireplace they were using to keep warm. In Oregon, authorities confirmed Tuesday that four people died in the Portland area of carbon monoxide poisoning.

At least 13 children were treated for carbon monoxide poisoning at Cook Children’s Medical Center in Fort Worth and one parent died of the toxic fumes, hospital officials said.

Stories of kindness emerged from the crisis.

In Clinton, Mississippi, Army veteran Evelyn Fletcher has been cooking and delivering meals to sidelined truck drivers, travelers and people staying at hotels after losing power at home.

On Monday, Fletcher made 85 meals. On Tuesday, she made 30 plates, while a local restaurant, T’Beaux’s Crawfish and Catering, cooked 75 plates of shrimp and gumbo that she and other volunteers delivered. And on Wednesday, Fletcher was cooking a pot of turkey noodle soup, hoping to deliver another 70 meals.

“People are worried about more snow,” she said. “We are going to keep people fed and keep them feeling hopeful.”