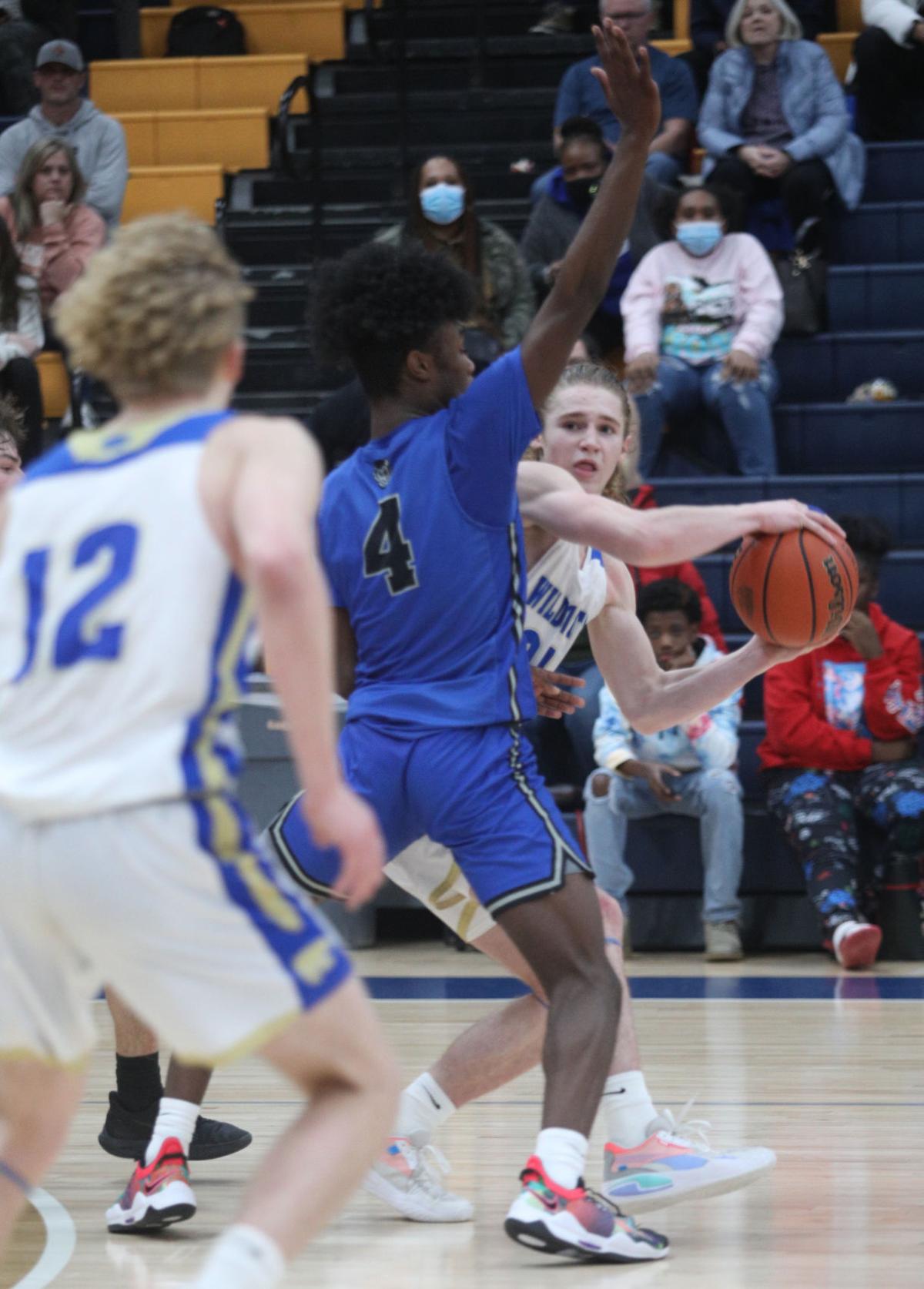 Wilson Central’s Adler Kerr passes around Lebanon’s Jaylen Abston (4) to Ethan Thomas (12), who took the ball and drove to the basket where he was fouled so hard he had to come out for a replacement to shoot his free throws. The second miss was rebounded and put back in by Damion Fayne for a Wildcat win. 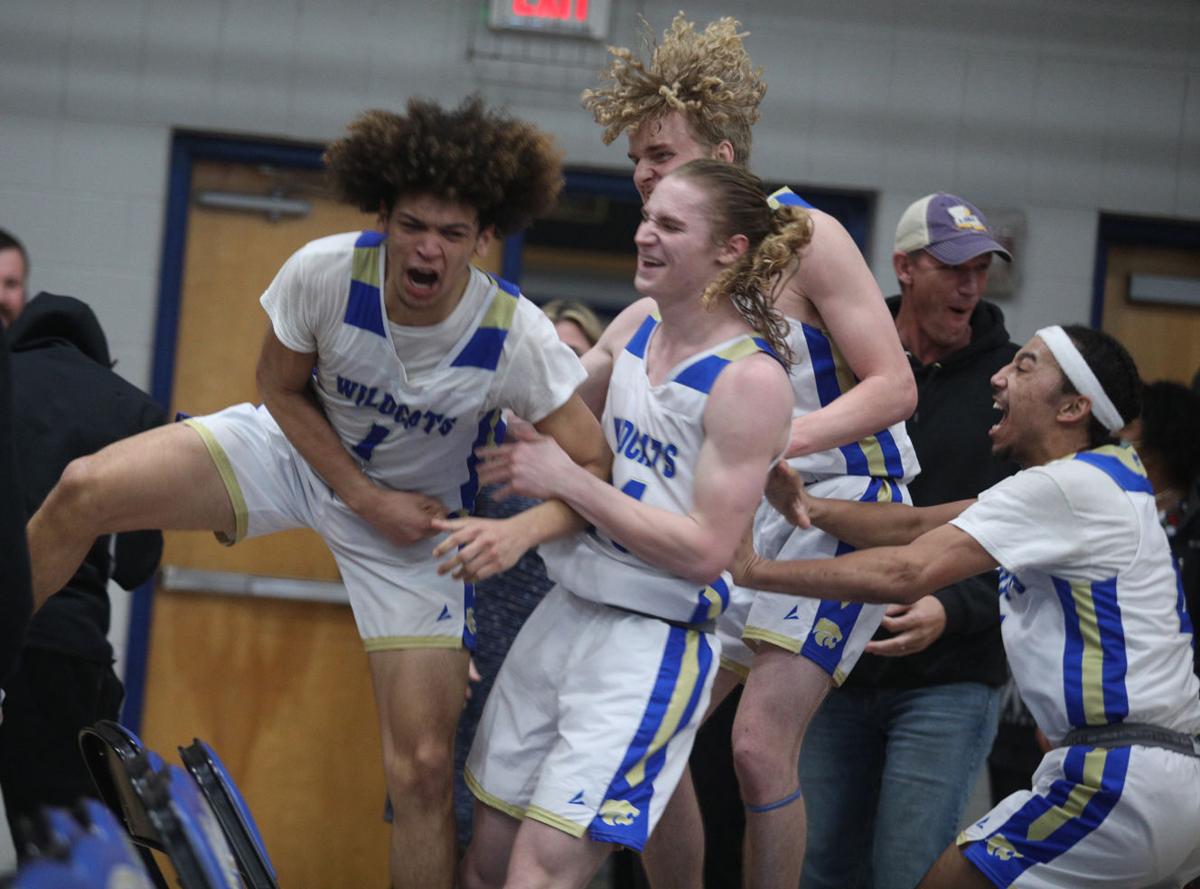 Wilson Central’s Adler Kerr passes around Lebanon’s Jaylen Abston (4) to Ethan Thomas (12), who took the ball and drove to the basket where he was fouled so hard he had to come out for a replacement to shoot his free throws. The second miss was rebounded and put back in by Damion Fayne for a Wildcat win.

GLADEVILLE — One week after missed free throws led to a buzzer-beating loss, Wilson Central’s boys rebounded their miss from the line and Damian Fayne one-handed the putback to stun visiting Lebanon 41-40 in the inaugural District 9-4A game for both teams.

Following a back-and-forth first few minutes, the Wildcats broke a 7-7 tie with a 15-1 run to go up 22-8. The Blue Devils battled back and took a brief lead in the fourth quarter.

A jumper from the elbow by Yarin Alexander put Lebanon back in front 40-39 with 31 seconds to play.

Following a Wilson Central timeout, the Wildcats’ Ethan Thomas was fouled hard by Alexander on a drive to the basket. The personal was Alexander’s fifth while Thomas was unable to shoot his free throws. Coach Michael Teeter inserted Josh Anderson, who started but hadn’t played the whole fourth quarter, to shoot the foul shots with 6.6 seconds left. He missed both, but Fayne got into the lane to grab the rebound and one-handed the putback into the basket to cap his six-point fourth-quarter and 10-point second half.

Lebanon coach Jim McDowell was unable to get the officials’ attention for a timeout as Adler Kerr stole the inbounds pass, allowing the final seconds to tick off on the Blue Devils’ third straight loss while the Wildcats, playing for the first time since missed free throws in the closing seconds left the door open for Gallatin to score a winning layup at the buzzer, celebrated as though they won the district tournament, not the first game in the new league’s history.

“We’re the team inside of our district that has five losses within four points,” Teeter said after his Wildcats climbed to 7-10 for the season. “You can look at that a lot of different ways. The record doesn’t look great. But when you look at these kind of situations, our guys have been in more battles at this particular moment time. Losing to Gallatin…makes guys a little more hungry.”

Lebanon, which opened the Associated Press prep poll season No. 6, has struggled offensively during its losing streak. This game was kind of a microcosm.

“Central had a lot more to do with that than anything,” Lebanon coach Jim McDowell said. “For whatever reason, I didn’t do a good job getting our guys ready to play. Mike’s kids play their guts out everytime, especially coming over here. They play really well at home. We let Kerr get loose a few times in the first half (14 of his game-high 16 came before halftime) and he hit some big shots.

Kerr’s 16 included a pair of 3-pointers, one of which staked Central to a 12-7 lead at the first-quarter break. Fayne finished with 12 while Thomas added eight, Evan Riggan a 3 and Austin Alexander two.

Alexander helped key Lebanon’s comeback with six of his 13 during the second quarter. But he picked up his fourth foul late in the third quarter and had to sit for an extended period. Rolando Dowell dropped a pair of 3s as he and Wyatt Bowling each added eight while Jaylen Abston scored six of his seven during the third period. Corey Jones and Brice Njezic each notched two.

Lebanon closed the first half with a 6-3 run to trim the margin to 25-14. Abston keyed the third quarter as the Blue Devils drew to within 33-29. LHS finally caught the ‘Cats at 33-33 with 5:36 to play on Jones’ pullup jumper. The teams battled tooth and nail the rest of the way.

“Lebanon’s way too talented not to go on a run,” Teeter said. “They’ve just got too many weapons. Coach McDowell does too good a job not to find ways to score.

“It comes down to those last little bit of plays. Our guys just fought until there was no time on the clock.”

The clock will start anew Friday night for both teams — Lebanon at Cookeville and Wilson Central at Mt. Juliet. Jarred Hall will return to the Blue Devils’ lineup after serving a two-game suspension which came on the heels of an illness which sidelined him for two previous contests.

“That should help,” McDowell said of Hall’s return. “But we’ve got a lot of other things we’ve got to get better at.”

SMITHVILLE — DeKalb County roared from behind in the fourth quarter Tuesday night to win the Battle of Sparta Pike 64-57 over Watertown.

The visiting Purple Tigers led 43-38 going into the fourth before DeKalb controlled the final eight minutes 26-14 behind nine points (including 5-of-6 from the free-throw line) by Elishah Ramos, who led the victors with 17 points, including a pair of first-half 3-pointers.

DeKalb County also got off to a fast start, leading 18-5 eight minutes in before Watertown’s J.J. Goodall scored nine of his 19 to fuel the Purple Tigers’ 22-9 second to forge a 27-27 halftime tie. Trent Spradlin scored eight of his 22 during the third period as WHS took the five-point lead going into the fourth.

Connor Vance fired in three triples on his way to 15 points for DeKalb County while Stetson Agee’s 10 included a pair of 3s as the host Tigers torched the nets with 12 treys.

Goodall swished half of Watertown’s six triples. Brady Raines racked up two from downtown for his six while Ian Fryer and Chase McConnell each collected three and Kier Priest and Jackson Thomas tossed in two apiece.

Watertown is scheduled to host Cannon County, coached by former Purple Tiger assistant Jason Knowles, in what will be the Tigers’ inaugural District 6-AA game on Friday night. Their originally scheduled league opener — last Friday’s snowout at Westmoreland — has been re-set for Monday with the girls tipping off at 5 p.m.

Turner’s basket lifts No. 5 Friendship past No. 4 Davidson

A week after knocking off defending state champion Goodpasture with a last-second 3-pointer on the road, Friendship Christian again used late-game heroics to post a win over a ranked team.

Friendship got off to a fast start with an 18-5 first-quarter lead. But the Bears battled to within 23-21 by halftime and 38-33 going into the fourth.

Davidson was leading late in the game until Colby Jones’ two free throws pulled Friendship into a tie with 51 seconds to play.

Turner keyed the fast start with seven of his 17 points during the first quarter while Max Duckwiler, the hero of the win over Goodpasture (which is No. 1 in the poll despite the loss), dropped in 13 as both hit three 3-pointers. Jones, Colby Jones and Riggs Rowe each finished with four points and a foul-plagued Hayden Potts and Charley Carpenter two apiece as the Commanders climbed to 12-4 for the season.

Lorenzo McMillian led Davidson with 14 points as the Bears slipped to 11-3.

Friendship is scheduled to go to Mt. Juliet Christian tonight with the girls tipping off at 6 p.m.

COOKEVILLE — Green Hill broke a two-game losing streak as the No. 10 Hawks broke into the new District 9-AAAA with a 54-40 win over Cookeville on Tuesday night.

Josh Heard hit a pair of first-half 3s as he led Cookeville with 16 points while D.J. Potts-Heard had eight of his 11 in the fourth, including two of his three triples.

Green Hill will step out of district Friday night when the Hawks travel to Siegel while Cookeville entertains league-rival Lebanon.