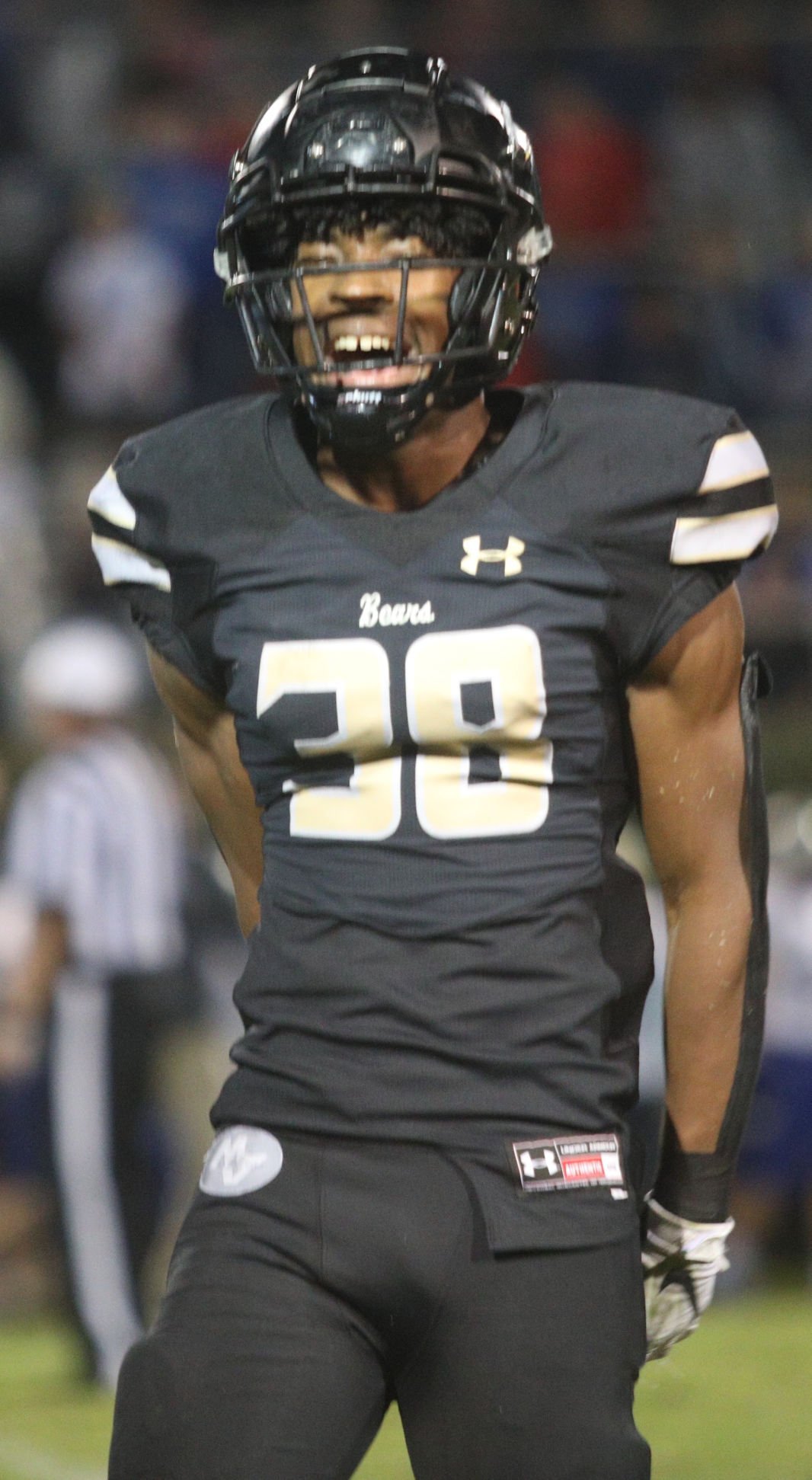 Amarion Workings is all smiles at the end of a game in which he scored both Mt. Juliet touchdowns in a 14-7 Golden Bear victory over rival Wilson Central. 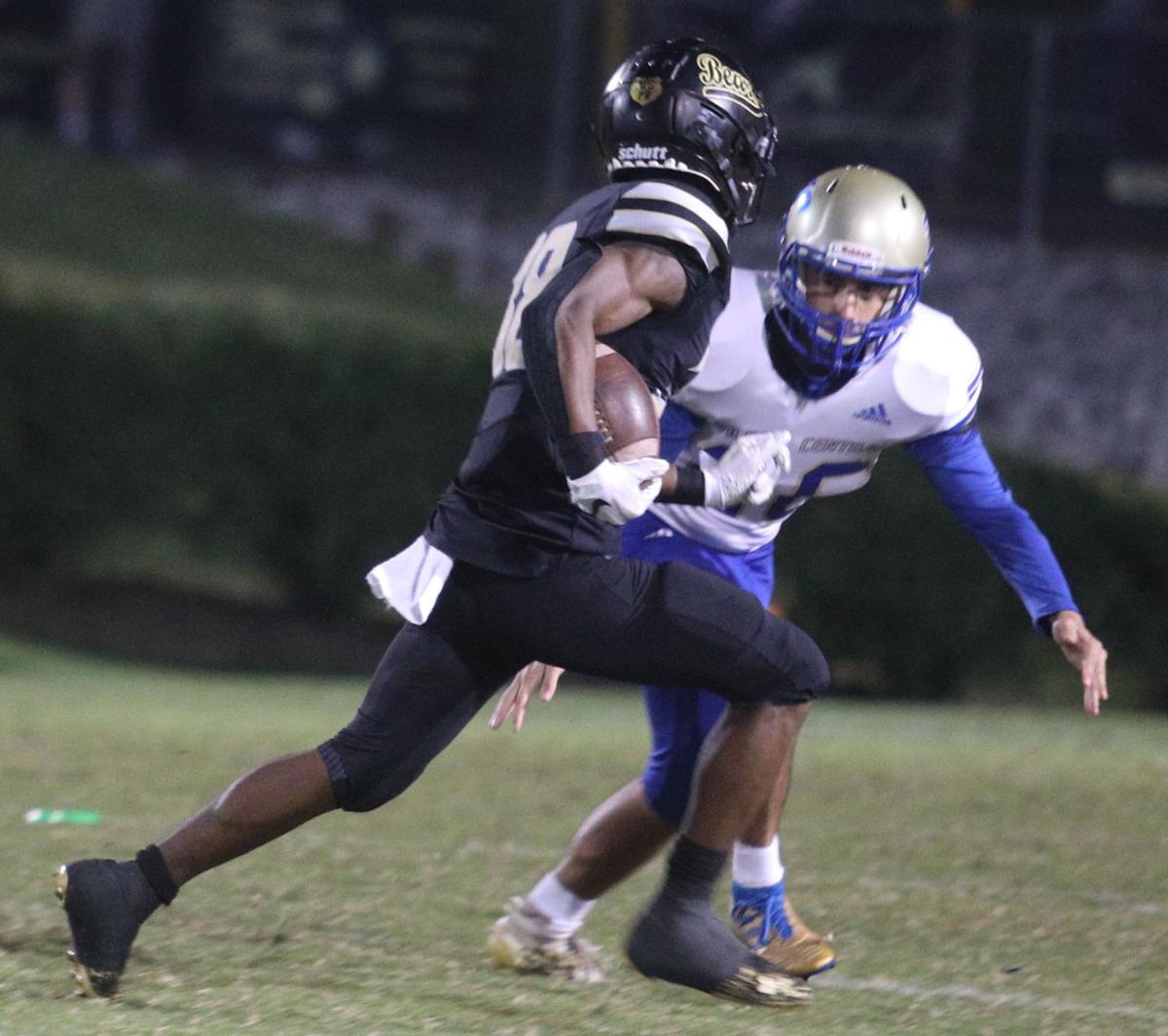 The last line of defense, Wilson Central kicker Esteban Hurtado tries to stop Mt. Juliet returner Amarion Workings to no avail as Workings has clear sailing the rest of the way on his tie-breaking 98-yard return in the third quarter. 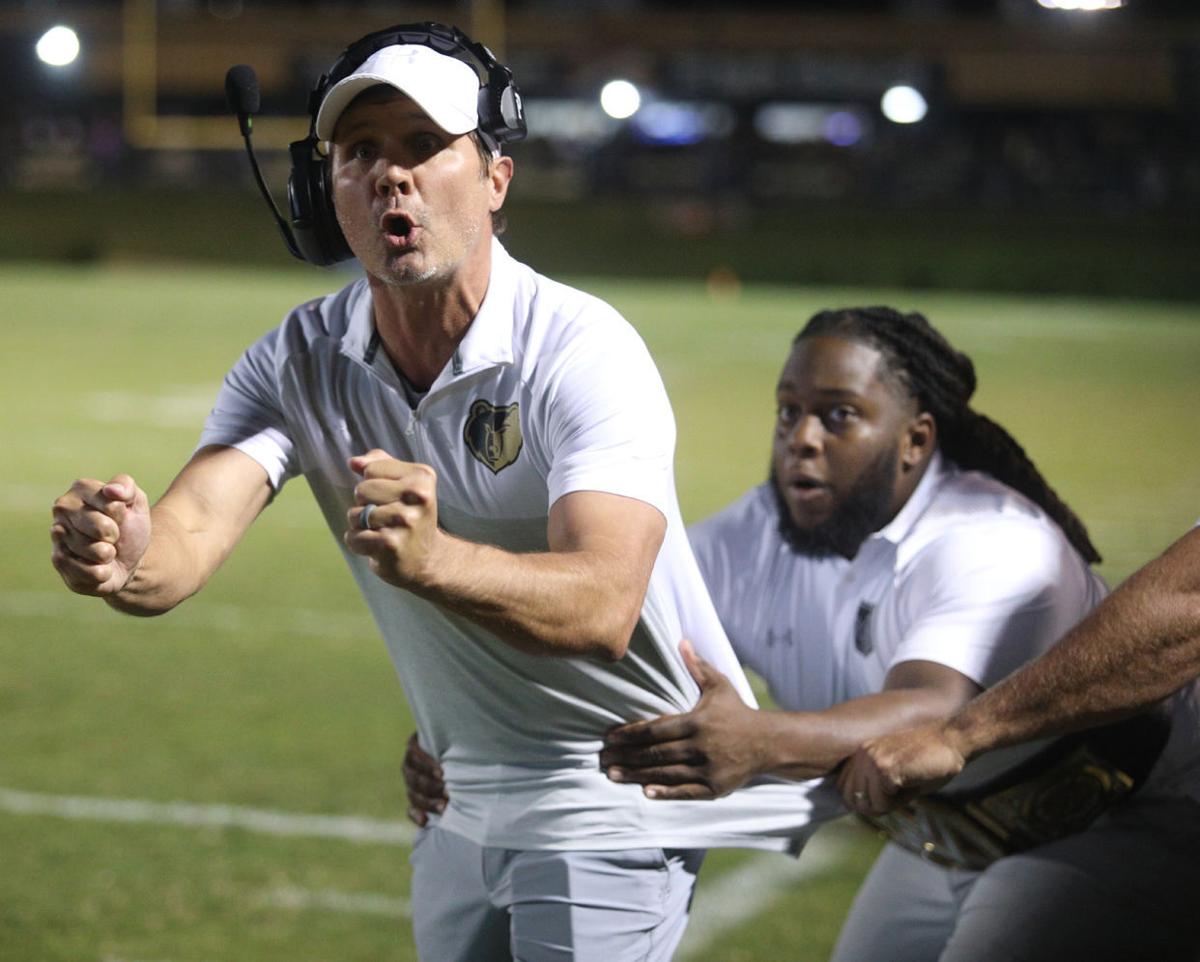 Mt. Juliet coach Trey Perry tries to get an official’s attention as assistant coach Aaron White pulls him back into the team bench area during the second half.

Amarion Workings is all smiles at the end of a game in which he scored both Mt. Juliet touchdowns in a 14-7 Golden Bear victory over rival Wilson Central.

The last line of defense, Wilson Central kicker Esteban Hurtado tries to stop Mt. Juliet returner Amarion Workings to no avail as Workings has clear sailing the rest of the way on his tie-breaking 98-yard return in the third quarter.

Mt. Juliet coach Trey Perry tries to get an official’s attention as assistant coach Aaron White pulls him back into the team bench area during the second half.

MT. JULIET — Wilson Central had just put together a 12-play drive to tie Mt. Juliet in the third quarter with visions of ending a 13-year dry spell to the Golden Bears when Amarion Workings struck like lightning.

Workings took the ensuing kickoff at his 2-yard line and 14 seconds and 98 yards later Mt. Juliet had the lead again and held on to a 14-7 win in a game in which both teams were without a key player.

Mt. Juliet quarterback/receiver Griffin Throneberry was serving a one-game suspension after he was ejected from the game at White County a week before. Wilson Central fullback/linebacker Blake Hobbs came out for the coin toss wearing sweats instead of pads after injuring his neck against Hunters Lane seven nights earlier.

But this rivalry isn’t about star players. It’s about players who grew up in the same subdivisions, attend the same churches, run into each other at stores and other hangouts and may even have once attended the same schools battling for bragging rights like siblings often do.

“It doesn’t matter who’s in the football game,” Wildcats coach Brad Dedman said. “Would it have made a difference? I don’t know, maybe a little. I don’t think so.

The stat sheet might show Workings to be the star who stepped up. He caught a Stephen Swoner pass on a crossing route over the middle and took it to the end zone for a 40-yard touchdown late in the first quarter.

But this game was about two defenses which wouldn’t give an inch, special teams play and tough running as Mt. Juliet, ranked No. 2 in the Class 5A Associated Press poll, avoided a head-turning upset loss to a team which had surprised many with a 4-1 start despite a roster smaller than many schools its size.

Both Mt. Juliet scores either came on or were set up by special teams play.

Wilson Central, with Hayden Shults, last year’s backup, having taken over at quarterback the previous week after returning from an ankle injury sustained during spring practice, moved the ball to the Mt. Juliet 20-yard line before 10-yards in negative plays prompted Dedman to bring out Esteban Hurtado for a 47-yard field-goal try.

Wilson Greenwood blocked the kick and Walter Bowers IV recovered for Mt. Juliet at its 45. Five plays and a 15-yard unsportsmanlike conduct penalty later, the Bears were on the board via the Swoner-to-Workings hookup.

“Wilson Greenwood is almost a block specialist,” Mt. Juliet coach Trey Perry said. “He plays defense but he’s on the field if there’s a field goal or an extra point. I think it’s his second or third block this year. Again, a senior making a big play in a big moment.”

Perry then surprised the ‘Cats with an onside kick recovered by the Bears’ Cayson Walz at the MJ 34.

But Wilson Central’s defense was stout from this point forward as the teams began exchanging punts. Hurtado boomed a punt over the Mt. Juliet returner and got extra yards on the roll until the count reached 55. The Bears’ Mark Shenouda, a former Wildcat countered with a 46-yard boomer which WCHS’ Mario Marshall made a fair catch on while falling over backward.

Mt. Juliet made a late-first half bid to add to the lead. But linebacker Seaton Hapner intercepted Swoner with 22 seconds to play and Shults took a knee to send the teams into halftime.

Wilson Central took the second-half kickoff and went 69 yards in those 12 plays with Shults running the ball straight ahead on sneaks under center and from the pistol. Tavin Hardin, getting eight carries in Hobbs’ absence, muscled across the goal line from 6 yards out for a 7-7 tie with almost half of the third quarter gone.

“Coach (Traye) Aric (Wilson Central’s offensive coordinator) and his staff did a good job with who they have as far as having an identity,” Perry said. “Misdirection’s the name of the game. Sixteen (Shults) did a good job tonight, even in the throw game, trying to keep us off balance.

“We’ve got nine new guys over there due to injury and all the other things. Even though it’s Week 6, sometimes we have to step back and say we’re watching them grow up before our eyes.”

Wildcat Nation was just starting to savor the end of a 13-year nightmare when Workings put them back to sleep. Like a radio disc jockey who can make the sound on your radio come from one speaker or the other, Workings cut off the speakers in the Wilson Central bleachers and turned it full volume on the Mt. Juliet side.

“They got an excellent kicker who’s put a lot of them in the end zone,” Perry said of Hurtado. “We saw an opportunity on film… Workings hit it. But I also feel like the blocking was really good on that and we talked about that all week long. Curtis Grah does a great job on kickoff return. It was the difference in the ballgame, the momentum play we needed.”

Wilson Central spent the rest of the night trying to get that score back and the Wildcats continued to put a big scare in Bear Nation. A 15-yard roughing-the-punter penalty kept the next drive alive. But a false-start penalty on the ‘Cats and Wade Savage’s tackle of Jase Nueble on third down prompted Dedman to bring in Hurtado for a 52-yard try, which fell short.

By this point, it was the fourth quarter and Mt. Juliet offensive coordinator Zach White, who once held the same title for Wilson Central, hadn’t called a play since Swoner’s interception in the second quarter. He called for a pass on the third series and Swoner threw his second straight pick, this one to Marshall, who returned it to the Golden Bear 21.

But Shults fumbled the ball on the second play and Savage recovered at the 9-yard line.

Wilson Central’s defense made one more stop and Marshall fielded a Shenouda punt, recovering his fumble on the play, at the 15 with 4:33 to play.

A 15-yard Shults pass to Alex Atwell gave Central a first down. But Shults was sacked on second down by Grennwood and Jeffery Pillows. He threw the ball but was called for intentional grounding, tacking another 5 yards in losses and putting the Wildcats in a situation the wing-T isn’t designed to overcome. A fourth-down fumble was recovered and advanced by offensive tackle Bryce Booth 6 yards, 9 short of the first down, and the Bears went into victory formation.

Mt. Juliet moved to 6-0 for the season and 3-0 in Region 5-5A going into a short week with a trip to much-improved Station Camp at 7 p.m. Thursday.

“These four-quarter games, this is what the playoffs are, this is what they’re going to be,” Perry said. “It gives you more situational opportunities to say ‘we’ve been here before, we’ve seen this before, don’t panic, make the next play’. Games like tonight give you that opportunity.”

Wilson Central, which slipped to 4-2, 1-2, will fight to stay in the region race at 7 p.m. this coming Friday when the Wildcats make their first trip to new league rival White County. Whether Hobbs will be in full gear and back in action remains to be seen.

“It’s kind of week to week and we’ll see how he goes this next week,” said Dedman, who added hopes were held out until Thursday afternoon Hobbs could play at MJ. “We hope to get him back, but we don’t know.

“He really wanted to go tonight, and he just couldn’t go. We’ll put a player’s health over any football game.”