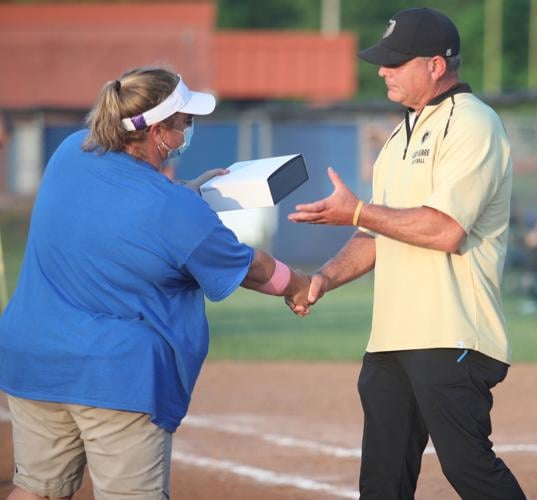 Wilson Central's Kacey Pedigo (left) hands the award to her fellow District 9-4A co-Coach of the Year Kevin Costley of Mt. Juliet. 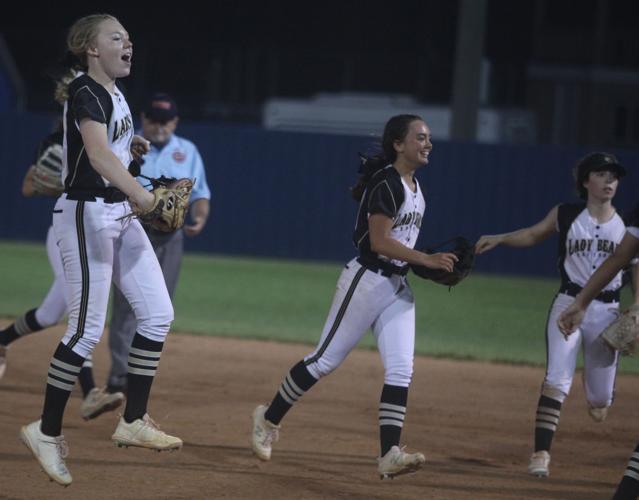 Mt. Juliet pitcher Taylor Haymans (left) skips off the field with her teammates after getting the double play for the final outs of the inaugural District 9-4A softball final.

Wilson Central's Kacey Pedigo (left) hands the award to her fellow District 9-4A co-Coach of the Year Kevin Costley of Mt. Juliet.

Mt. Juliet pitcher Taylor Haymans (left) skips off the field with her teammates after getting the double play for the final outs of the inaugural District 9-4A softball final.

GLADEVILLE — Wilson Central didn’t lose a District 9-4A softball game until late in the season. But it’s Mt. Juliet which is continuously finding ways to win during tournament time.

The Lady Bears built a big early lead in Wednesday’s district final before holding off a late-inning charge from top-seed/host Wilson Central in a 5-4 win.

Mt. Juliet batted around to take a 4-0 lead in the bottom of the first inning with Brylee Sayer and Hailey Stewart each singling in one run sandwiched around Cali Hughes’ two-run triple as the Lady Bears chased Wilson Central starter Kenzie Miller.

Kyleigh Pitzer, who had just pitched four innings in Central’s 3-1 win over Green Hill in the loser’s bracket final, kept the Lady Bears in check through the fifth inning, allowing just one run in the fourth on Karah Hood’s single.

Central put a scare in Mt. Juliet in the seventh on Taelor Chang’s three-run homer, her 19th rocket of the season, and Maddison Stowell’s RBI single.

But Taylor Haymans survived, getting a line drive double play to second to end the game, and was named tournament most valuable player. The left-hander allowed 10 hits and no walks while striking out four.

“We got hot at the right time,” said coach Kevin Costley, who’s been with the Lady Bears as an assistant or head coach since around 2010. “Of course, they played hard all season long. We’ve actually played great all season long with very few hiccups here and there. This is a young ballclub. We’re a year ahead of where we should be. They’re the hardest-working team I’ve ever coached.

“They never quit, worked hard the entire time. They never doubted themselves even when I was doubting them.”

Sayer and Annalise Mecklenburg had two hits each for the Lady Bears, who improved to 27-10-1.

Madison Carey collected three hits and Stowell and Kristen Smith two each for the Lady Wildcats. Smith and Alli Johnson each had a double.

But Wilson Central’s big win was earlier in the day. Thus, Central will go to Station Camp on Monday for the Region 5-4A opener while Mt. Juliet will host Beech at the Mel Brown Athletic Complex at 7 p.m.

“I asked these girls to give me all they had today,” Lady Wildcats coach Kacey Pedigo said. “I said to show up and show out. And they did it. The scoreboard said we fell short. But really, we came out winners today.”

All-district awards were named between games. Central’s Chang was named Most Valuable Player and Pitzer Pitcher of the year.

Costley and Pedigo are co-Coaches of the Year.

Three-run fourth liftS Lady Wildcats to district finalGLADEVILLE — Wilson Central scored all its runs in the fourth inning of Wednesday’s District 9-4A loser’s bracket final and four innings of relief pitching by Kyleigh Pitzer kept Green Hill at bay in a 3-1 win, sending the Lady Wildcats to the finals and the Region 5-4A tournament.

Reese Serbin’s two-run double put Central ahead after Cassidy Goddard’s RBI single tied the game in the fourth against Sophia Waters, who surrendered five hits and two walks while striking out six. Maliyah Wilkins, who doubled among her two hits, drove in Cadence Jarrett to give the Lady Hawks a 1-0 lead in the third against Central starter Kenzie Miller, who surrendered five hits and a walk while striking out four in three innings.

Pitzer came on in the fourth and held the Lady Hawks to two hits and no walks while striking out six.

Lady Purple Tigers finish as runner-upWESTMORELAND — Top-seeded Westmoreland scored four runs in the first inning of a 6-2 win over Watertown in the District 6-2A final Thursday night.

The Lady Purple Tigers cut the margin in half with both their runs in the fifth, with one coming home on Abby Hall’s RBI.

Danielle Pryor pitched all six innings for Watertown, striking out two and walking one. Four of the runs were earned.

Watertown will take a 10-14 record to Bledsoe County in Pikeville for the Region 3-A opener at 6 p.m. Monday while Westmoreland hosts Monterey.

Watertown reaches 6-2A final, regionalWESTMORELAND — Watertown stayed alive and advanced to the District 6-2A tournament championship round, qualifying for the Region 3-2A tourney in the process, with an 8-4 win over Smith County in the loser’s bracket final Wednesday.

The Lady Owls jumped to a 3-0 lead in the third inning and led 4-0 before Watertown wiped out the deficit with six scores in the sixth and two in the seventh.

Freshman Presley Clark doubled as she and Ali Tunks each drove in two runs on two hits. Lauren Franklin also had two RBIs on one hit from the No. 9 spot in the lineup. Rachel Cromer cracked a double.

Gabby Burton pitched 2 1/3 shutout innings in relief of starter Danielle Pryor to pick up the win, allowing just one hit after Smith County had six hits off Pryor.