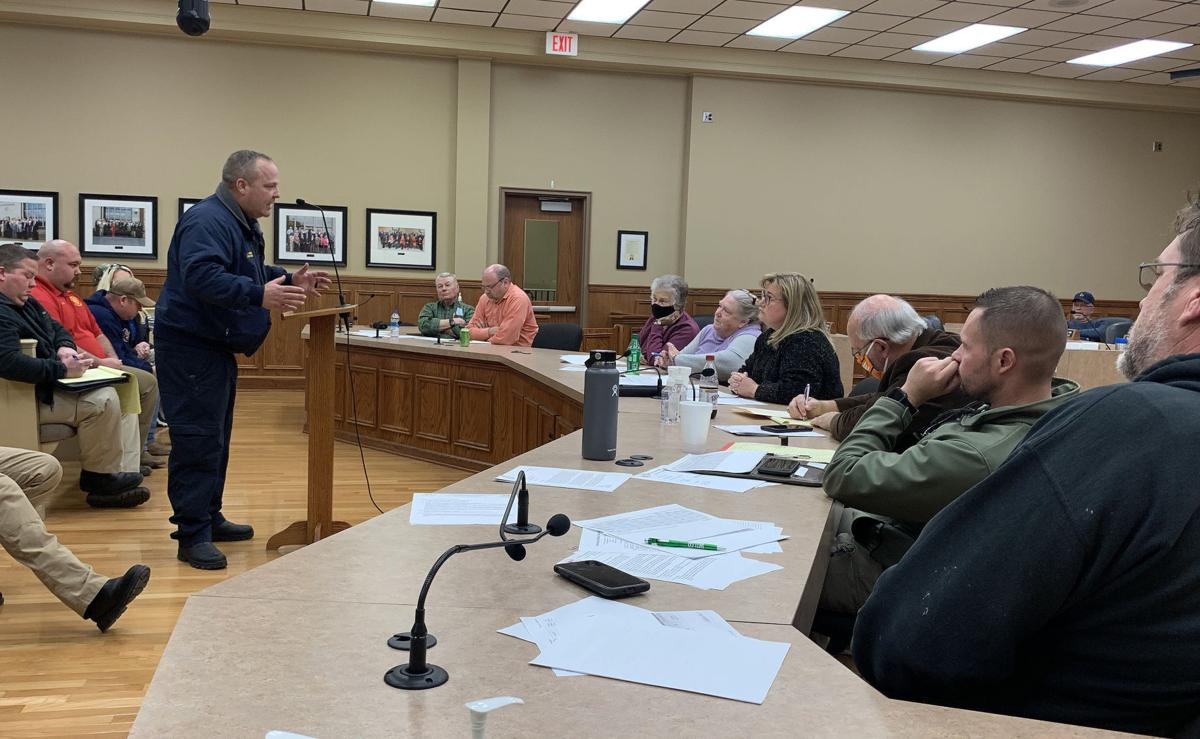 Wilson County Emergency Management Agency Deputy Director and Fire Chief Jeremy Hobbs addresses the county’s EMA committee at the Wilson County Courthouse on Tuesday evening. Hobbs said that the committee has a history of hanging the director out to dry. 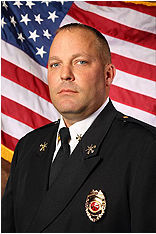 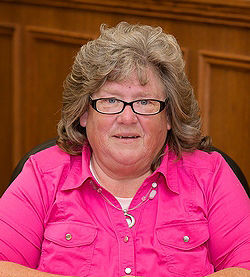 Sparks flew during a meeting at the Wilson County Courthouse between the county’s emergency management administration and the committee tasked with financing it.

Tensions have been high between the Wilson County Emergency Management Agency committee and the agency for a couple months, as the former explores remedies for staffing shortages plaguing the latter.

Short-term options appear limited, and the county is waiting for a pay study to be returned to know where departing personnel’s wages need to be to remain competitive with nearby counties.

More than 20 WEMA personnel, mostly paramedics and advanced emergency medical technicians, have vacated positions over the past year.

As a result of the shortages, WEMA administration has had to get creative to improvise coverage in the county’s emergency stations. At times, that has led to some stations being closed as resources are consolidated in an attempt to meet the demands on the county.

An impassioned plea from a rural county resident set the stage for the meeting that would soon follow. Michelle Pitts of Rock Springs Road near Statesville called the situation “frightening.”

Her son was born with adrenal insufficiency, which is a disruption of the body’s normal release of cortisol. It can result in a life-threatening condition characterized by low blood pressure. Symptoms tend to be non-specific and include fatigue, nausea, darkening of the skin, and dizziness upon standing.

“My child could die waiting on (first responders from) Watertown to get to me,” Pitts said. “I can inject my child, but I can not defibrillate him if he is having cardiac arrest.

“It’s petrifying as a parent and as a neighbor of someone who suffers from strokes.”

“I just feel like our side of the county gets left out of the equation,” Pitts said. “I know it’s based on population and call numbers, but is one life more valuable than another?

“If you have to raise taxes to do this, do it.”

Although stations in Statesville and Norene were closed on Tuesday, WEMA Deputy Director and Fire Chief Jeremy Hobbs told the committee, “Not one time has your area not been covered. There might not be people in that station, but I make a phone call and (get someone in place to back us up).”

Hobbs’ main criticism levied against the committee is an overt lack of support for the agency director.

“Commissioners (Sara) Patton and (William) Glover have not supported him (Joey Cooper) at all,” Hobbs said.

Hobbs said that the lack of support is nothing new but rather a recurring theme in the agency, one that he’s noticed during his 23 years of working there.

“How many times have I heard from Commissioner Glover as long as he’s been the chairman,” asked Hobbs. Using his hand, he answered by gesturing zero.

Glover is the committee chair but was not in attendance for the meeting on Tuesday due to quarantining restrictions from a close contact COVID-19 case.

Hobbs subsequently told Patton that some station supervisors were “playing her like a fiddle.”

“Don’t be sneaking around the stations behind our back and talking to the guys who got disgruntled.”

The commissioner took objection to that, responding in kind to the director, “Mr. Cooper, anything you have asked for since I have been on this EMA committee, have you not gotten it? Have I not always supported it? We can go back through the votes and see through the minutes.”

The director replied back, “You have voted for them, yes.”

Patton added, “And most of the time I made the motion to do it, because I have always been behind EMA, always, now and forever.”

In response to Hobbs’ suggestion that Patton was going behind their backs, she said, “I have firefighters and EMTs who are residents of my district who I can talk to any time. All I ask people when I go to these stations is what they need.”

Hobbs replied, “You can be offended. I’ve been offended for 25 years.”

Cooper said that the agency’s problem right now is with AEMTs and paramedics. That’s where the positions are being lost. He said to extend this pay increase to any other positions outside of those two job descriptions would be discrimination unless every personnel gets a similar pay bump.

Right now, according to Cooper, the agency’s issue comes from a hiring standpoint, but he warned the committee that “the longer it goes, it will change from a hiring issue to a retention issue.”

Commissioner Lauren Breeze said, “The intent tonight was to figure out how to help WEMA stop the bleeding. Where we are stuck is that we have to have recurring revenue. All we have in our pocket at this time is a stop-gap solution. I want to respect what you (Cooper) want to do. But I also want to make sure that residents in my district get ambulance service.”

When the agency presented the committee with a pay study it had conducted earlier independently, it informed committee members that it would cost $4.2 million to get in line with other counties.

The budget adjustment recently recommended by the committee was for significantly less, about $500,000 to fund overtime requests.

Ultimately, the committee remains where it was upon entering the meeting. Until the results of the pay study comes back and can be applied to every department, no real moves can be made in any one direction.

Wilson County Human Resources Director Quiana Scruggs reminded everyone during the meeting that although the pay plan proposal had an original deadline of Jan. 15 that that estimate was made in September. However, the window to begin the study didn’t open until the county commission formally approved the budget item transfer to fund it at the October meeting.

“We owe Burris, Thompson and Associates, (the hired firm) that six-week timeframe,” Scruggs told the committee.

The pay study is costing the county $18,000. It was approved by the county commission during a regular-scheduled October meeting.

Patton said, “With the dire situation we are in, do we have to wait for (the pay study) to compile the information from all the departments?”

Commissioner Justin Smith has been vocal about getting the first responders a pay raise, but he said any quick fix would be a band-aid.

“We paid for this study to get a professional opinion,” Smith said. “We want to make sure this is done correctly and efficiently.”

Smith assured the agency director and his administrators present, “Help is on the way.”

Vice president of the local firefighters’ union, Colton Young, told the committee that he heard a quote from one county official saying some of the personnel are chasing the dollar.

“Chasing the dollar is not what people in this field are doing,” Young said. “If you give this field a boost, and show them their loyalty, they will not go. As a representative of over 50 personnel, I can confirm that. They are looking at you to make a job that pays what they need to live here and to help them buy groceries.