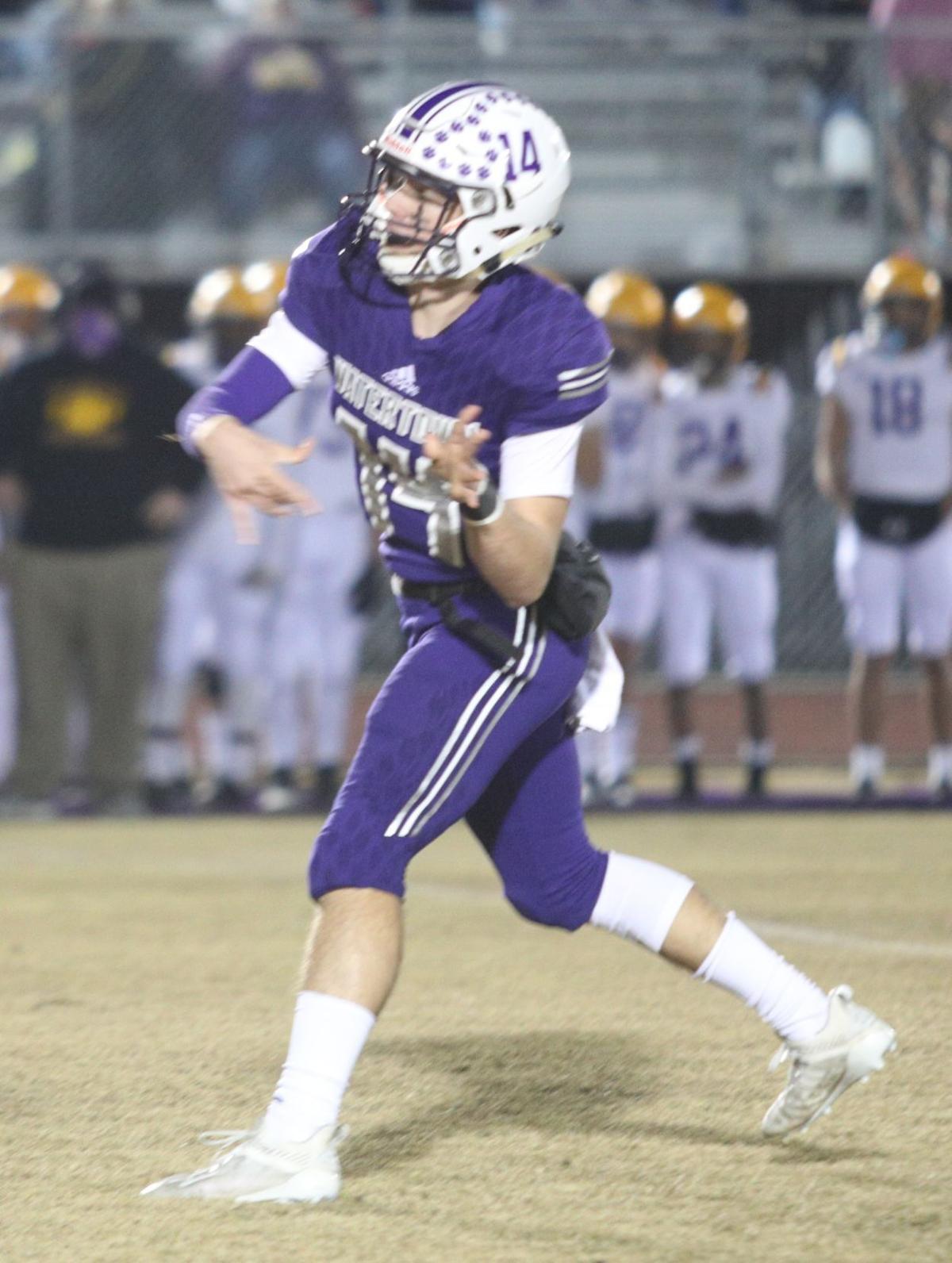 Watertown quarterback Brayden Cousino follows through on his 21-yard touchdown pass to Quanterrius Hughes-Malone on fourth down for a 7-0 Purple Tiger lead in the first quarter. 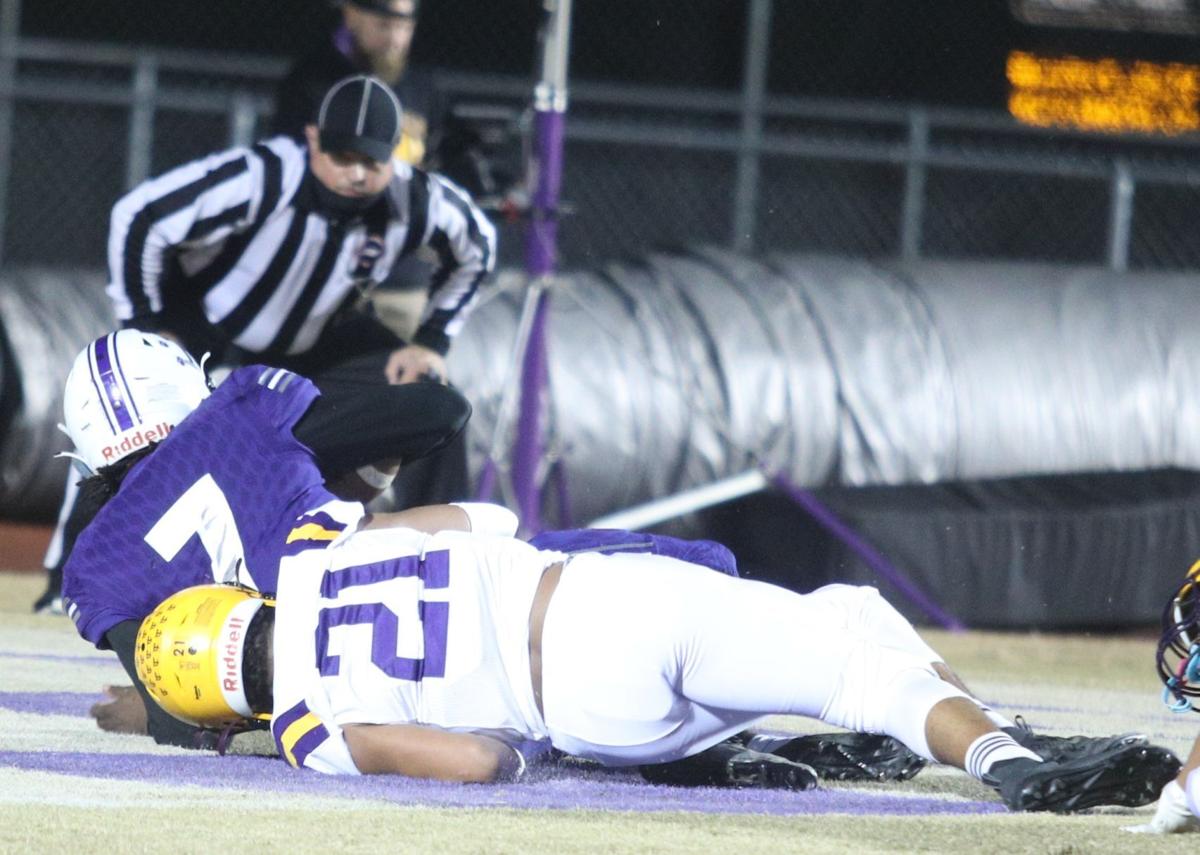 Trousdale County’s Keenan Burnley (21) tackles Watertown’s Quanterrius Hughes-Malone, but in the end zone to complete a 21-yard pass on fourth down to give the Purple Tigers an early 7-0 lead.

Watertown quarterback Brayden Cousino follows through on his 21-yard touchdown pass to Quanterrius Hughes-Malone on fourth down for a 7-0 Purple Tiger lead in the first quarter.

Trousdale County’s Keenan Burnley (21) tackles Watertown’s Quanterrius Hughes-Malone, but in the end zone to complete a 21-yard pass on fourth down to give the Purple Tigers an early 7-0 lead.

WATERTOWN — The third time was not the charm for Watertown last night sa Trousdale County won a Class 2A state quarterfinal game for the third year in a row at Robinson Stadium via a 21-13 verdict over the Purple Tigers.

Trousdale back Cameron Rankins was a battering ram on all three Yellow Jacket touchdowns. He also turned back the Tigers’ final offensive chance with an interception in the end zone.

Watertown’s 10-game winning streak was snapped as the Tigers ended a 11-2 season.

The Yellow Jackets, who haven’t lost since a Week 3 setback to Watertown in Hartsville, picked up its 10th straight triumph and improved to 11-2.

Trousdale County will host undefeated Meigs County, which improved to 13-0 vis a 42-14 win over South Greene, at 7 p.m. next Friday at John Kerr Field (The Creekbank).

After Watertown’s first drive stalled on downs and a Trousdale County punt, the Purple Tigers moved 66 yards to Brayden Cousino’s 21-yard fourth-down touchdown strike to Quanterrius Hughes-Malone for a 7-0 lead.

After an exchange of punts and a Watertown drive which was short-circuited by damaging back-to-back penalties, Trousdale again used its punishing ground attack to burrow 72 yards to Rankins’ go-ahead 2-yard dive 30 seconds before halftime for a 14-7 Yellow Jackets lead.

The pattern continued in the second half as Trousdale County took the kickoff and marched 65 yards — 46 came on a Rankins run on third-and-10 — to Rankins’ third score of the night, a 9-yarder untouched around the left side for a 21-7 lead.

Watertown finally finished an offensive series in the end zone as Hughes-Malone took a short Cousino flip in the left flat 26 yards to the end zone. A missed extra point left the Tigers trailing 21-13 with five minutes left in the third quarter.

The Tigers’ defense also stepped up and forced a pair of punts before making a bid to tie the game, driving to the Trousdale 8 before Rankins intercepted Cousino in the end zone on fourth down with 7:25 to play.

Trousdale County, without throwing a single pass all night, went back to its bread-and-butter. Rankins rammed it over on fourth-and 1 and later converted a third down with a 12-yard run. He capped the night with a 2-yard quarterback sneak on third down with just over a minute to play before taking a couple of knees to run out the clock on the Tigers’ season.