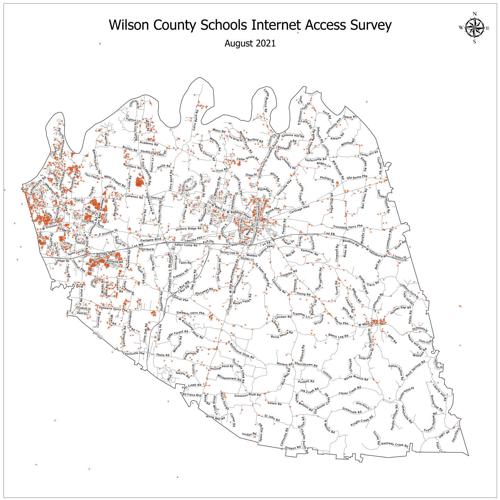 Wilson County Schools requested information from students on access to the internet. The red dots on the map indicate residences where there was no internet access in the home. 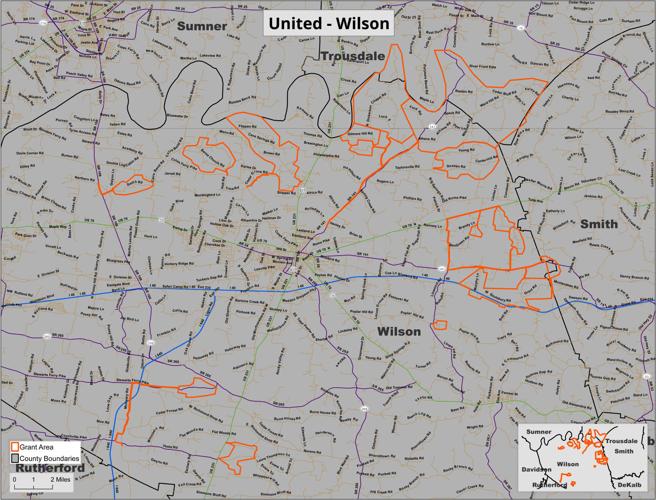 The red outlined areas are the proposed places where United Communications would aim to expand broadband services in Wilson County.

Wilson County Schools requested information from students on access to the internet. The red dots on the map indicate residences where there was no internet access in the home.

The red outlined areas are the proposed places where United Communications would aim to expand broadband services in Wilson County.

Despite being one of the wealthiest counties in the state, there are still hundreds of residents in Wilson County without broadband access.

Thankfully though, there may be a solution on the horizon.

There is approximately $400 million available for grants through the American Rescue Plan Act that are designated for this purpose. The Tennessee Department of Economic and Community Development has been taking grant applications from counties around the state for proposed projects in this area. However, with 95 counties all aiming for a piece of the pie, grant applications are requesting more than $1 billion, so there is not enough to go the whole way around.

The way the match works is that the state uses those federal dollars to fund 70% of a project. Then, the company that will be doing the work puts up 20%, leaving individual counties on the hook for 10%.

“Broadband is probably the most integral medium in its use for distance learning, telecommuting for work and telemedicine practices,” said Dan Walker, Wilson County commissioner and chair of the cable/TV committee. “The recent pandemic has fine tuned all of these approaches to daily life, and made this electronic superhighway of communication a more vital link for all aspects of society.”

When Wilson County opened its window for companies to submit proposals, it received three from United Communications, DeKalb Telephone Cooperative and Comcast. Each application followed the match parameters.

For example, United Communications, the cable company acquired by Middle Tennessee Electric, has a proposed broadband expansion project with an estimated $7.5-million price tag. As a breakdown, the county would have been responsible for paying $.75 million, while United would have forked over $1.5 million, with the remainder coming from the state’s pool of federal relief funds.

While the grant recipients won’t be announced until the summer, there is currently a citizen comment section on the TDECD website for the projects that have been proposed.

The comment section will allow Tennesseans to express support for broadband as well as allowing providers the chance to cross reference proposals with current service maps to eliminate the possibility of unnecessary overlap.

“They want to prevent funds from going into areas that already have service, in case some maps are out of date,” said William Bradford, United Communications’ chief executive officer. “It’s a last gut check.”

His company’s primary goal is to bring service to all the residents that lack access.

“We used a combo of federal maps and research from the field to compile our data,” Bradford said. “We pulled out every tool in our toolbox.”

According to the Tennessee Economic and Community Development website, the broadband accessibility grant program is a “critical part” of the state’s plan to address broadband gaps. The program is designed to offset the capital expenses in the deployment of broadband in unserved areas. The goal of this program is to facilitate broadband access to all Tennesseans while promoting practices that increase deployment and encourage adoption. Funds will be targeted to areas that are unlikely to receive broadband service without grant funding.

Bradford explained that the funds will allow his company to physically install the fiber cables to premises in the underserved communities, which have largely been left out in the cold as a business decision. The general thinking is that if it was profitable to provide access to these areas, there would already be a company providing the service.

As imperative as internet access is to completing school work and professional development, Walker said that it cannot be left up to businesses to fill that need, because market forces might prevent services from reaching everyone.

“Barriers to entry in these markets are very expensive,” Walker said. “There are usually one or two players in a market. Now, you are starting to see a third player step up, like United and DTC.”

With expanded access the cornerstone of the grant program, Walker remains optimistic that the underserved communities will finally get to plug in.

Cutting the cordThe fact that so many homes remain without access to broadband is part of a larger issue that is not isolated to Wilson County or even Tennessee. It’s called cutting the cord, referring to more people turning to unconventional methods of internet access like streaming, without having a physical line to connect through.

Stephen Shao, an associate professor of business in Cumberland University’s Labry School of Science and Technology, explained that the issue is predicated on convenience and cost.

“Wifi connection is more convenient to residents and businesses, especially small businesses,” Shao said. “You can get a hotspot at most fast-food restaurants or retail stores or a freebie service offered by commercial organizations.”

With fiber, Shao said that users will get that easily, compared to more dated equipment made of copper, such as coaxial cables. While many residents are turning to Wi-Fi counterparts for access, Shao indicated that topography in Tennessee, like it’s rolling hills, is inherently disruptive to frequency transmission.

“Today, we are in a rainy mode here ... all those things can collectively cause your transmission speed to be spotty or not be continuous,” Shao said. “5G is on a different wavelength and frequency, so it’s supposed to be a lot faster.”

Shao mentioned that the transition to more advanced systems of transmission is a direct result of nearing capacity.

“They went from analog to digital for capacity,” Shao said. “They were filling up their first-generation cell towers. They said, ‘How do we get more simultaneous users?’ ”

Similarly, Shao expected the capacity to propel innovation in the field and continue to bring in more customers through projects like these grants and other initiatives.