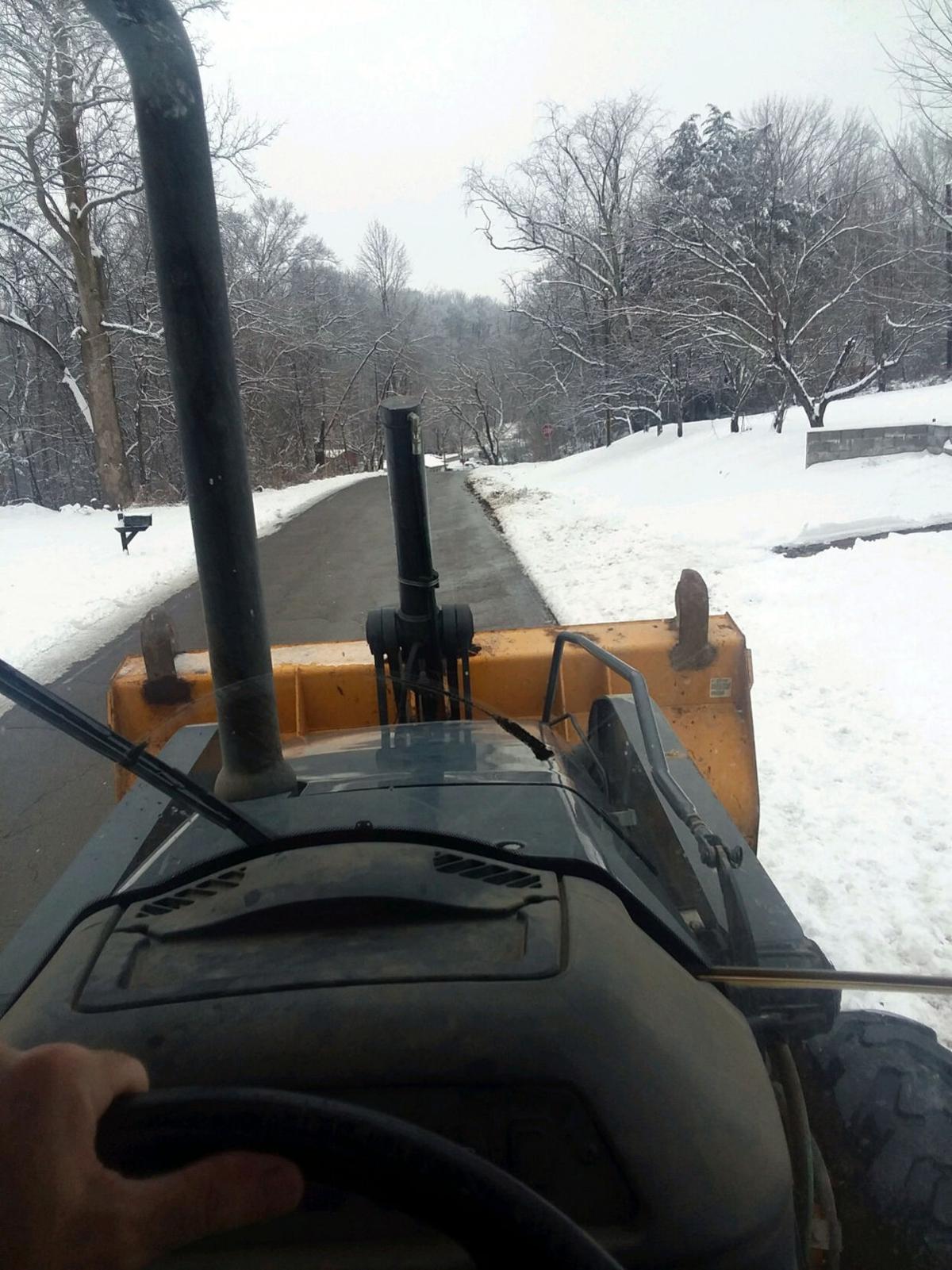 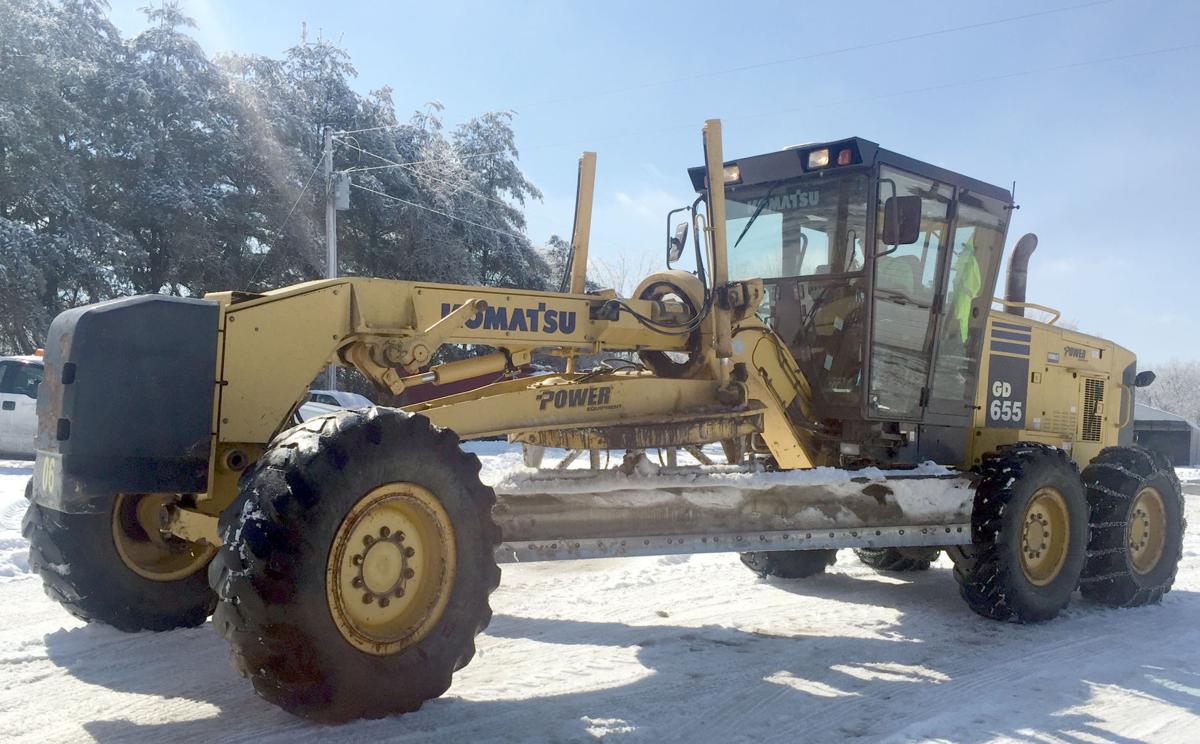 The Macon County Highway Department — which worked throughout last week to treat streets that had winter precipitation — is responsible for 620 miles of roadways in the county. 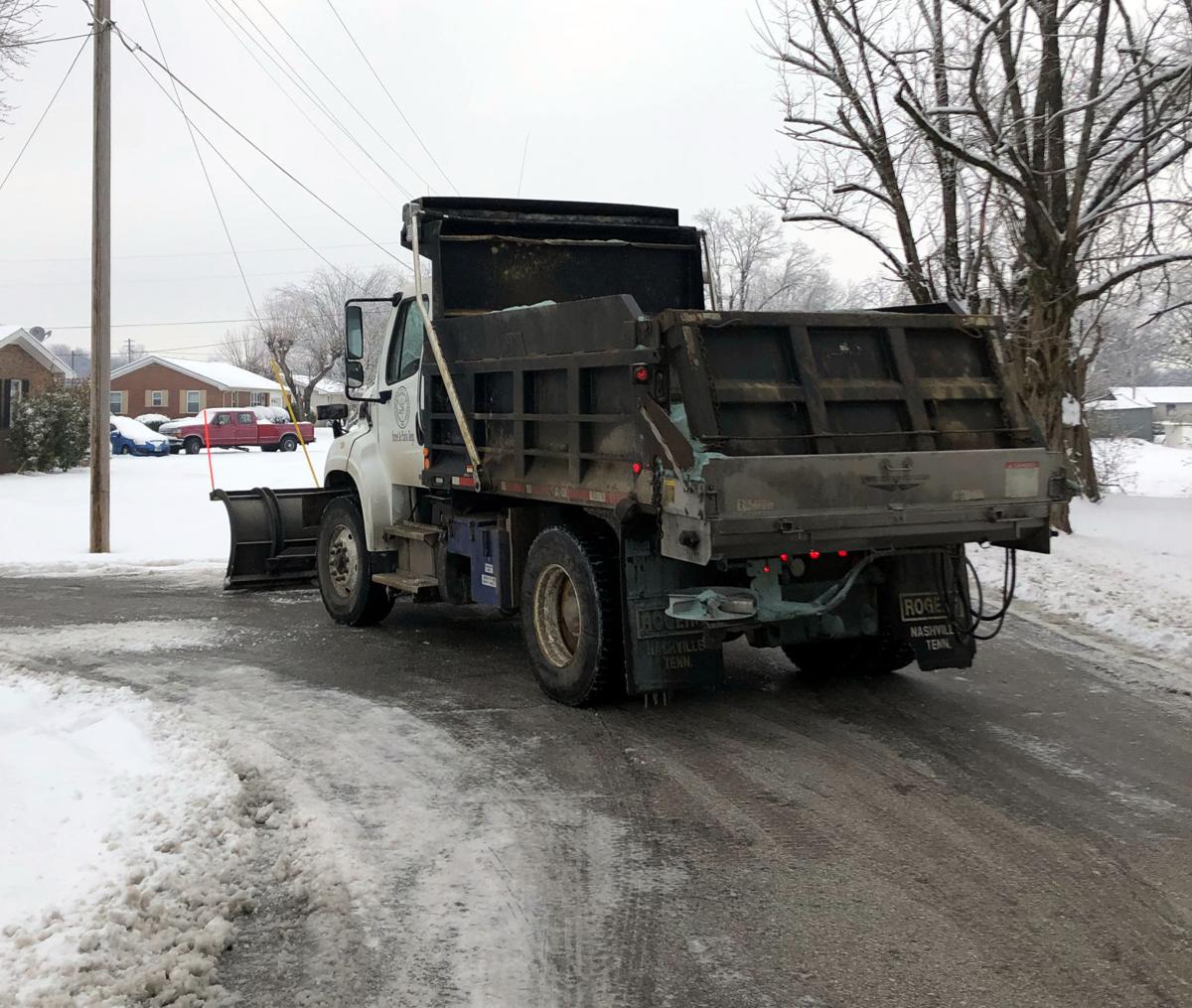 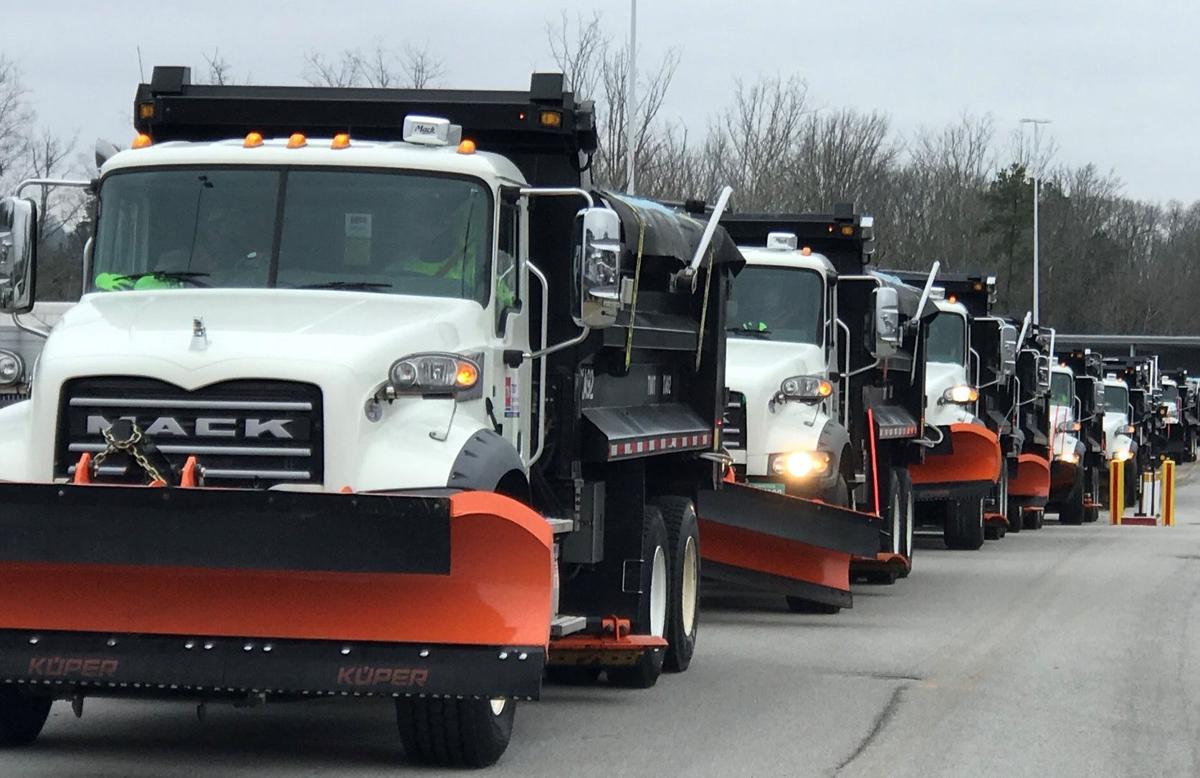 The Tennessee Department of Transportation maintenance shop in Lafayette maintains 99 miles of state highways in the county. 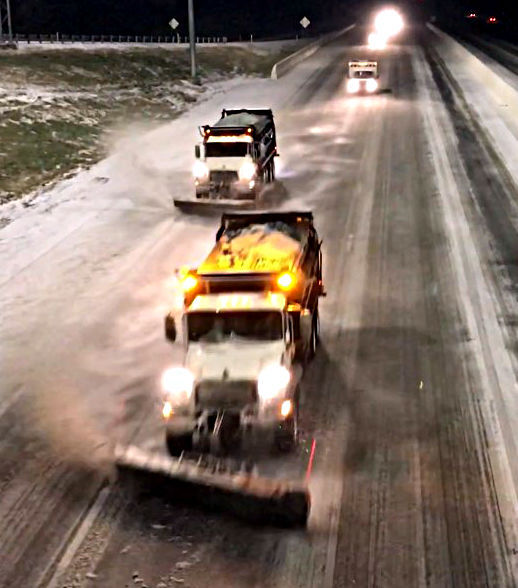 From the evening of Feb. 14 through the morning of Feb. 19, the Tennessee Department of Transportation used approximately 27,500 tons of salt and logged more than 170,000 miles in clearing and treating roadways across 26 counties in Middle Tennessee.

The Macon County Highway Department — which worked throughout last week to treat streets that had winter precipitation — is responsible for 620 miles of roadways in the county.

The Tennessee Department of Transportation maintenance shop in Lafayette maintains 99 miles of state highways in the county.

From the evening of Feb. 14 through the morning of Feb. 19, the Tennessee Department of Transportation used approximately 27,500 tons of salt and logged more than 170,000 miles in clearing and treating roadways across 26 counties in Middle Tennessee.

It left many in Macon County working throughout the week to clear — and then reclear — roadways.

Each city is responsible for the roadways inside the city limits, though the Tennessee Department of Transportation maintenance shop in Lafayette deals with the 99 miles of state highways in the county (with Highway 52 and Highway 10 being the two highest-priority routes for TDOT in winter-weather situations).

“We try to work with the city and state too,” Macon County Road Superintendent Audie Cook said. “We all help each other out. If I’m traveling one of their’s (roads) to get to one of mine, I’ll go ahead and scrape it on the way … and they’ll do the same.”

A significant amount of precipitation — resulting a layer of ice on roadways in addition to a layer of sleet — fell on Sunday evening (Feb. 14), and sub-freezing temperatures persisted until last Saturday.

“We’re just salting and grading with what we’ve got,” Cook said. “It’s been so cold.”

The Macon County Highway Department began working before the first round of precipitation arrived.

“We started a day ahead of time,” Cook said. “We put some (treatment) on the bottom to help us, but this time, it got so cold. So, it wasn’t much help.”

“It’s been very intense over the last week,” TDOT community relations officer for Region 3 Kathryn Schulte said. “We began having freezing fog issues on the morning of Feb. 12, and our crews had to respond to those issues throughout the weekend even before the shift work started on Sunday night.”

Macon County’s TDOT maintenance shop is led by Kevin Wooten, who is in his 13th year as the supervisor there. The five-man department utilizes five salt trucks with snow plows that attach to the front of their trucks.

TDOT employees alternated shifts to allow for treatment of roadways 24 hours a day beginning on Feb. 14.

From the evening of Feb. 14 through the morning of Feb. 19, TDOT has used approximately 27,500 tons of salt and logged more than 170,000 miles in clearing and treating roadways across 26 counties in Middle Tennessee.

“Since most of our state roads are clear, right now (beginning last weekend), we are trying to send as many folks home as possible to get rest,” Schulte said. “But unfortunately potholes always follow after snow and ice, so we are also having to prepare to get potholes patched.”

Lafayette alternated stages of plowing and scraping roads along with utilizing salt and brine (which is a high concentration of salt in water) to treat the streets.

“We salted and scraped all day (last Wednesday),” Wilmore said. “When we left here (on Wednesday), it was perfect. Then, we started back (Thursday) morning.”

The second round of precipitation — which was primarily snowfall — arrived during the late-afternoon hours on Wednesday and intermittently continued throughout the night.

“I was well-pleased with where we were at,” Cook said. “This (second) one comes in, and you have to start all over. It was like you haven’t done anything.”

The abnormally-low temperatures that persisted last week made treating the roadways additionally challenging.

“This is the most probably we’ve had in seven or eight years,” Cook said. “I’ve been here 12 years (as the road supervisor), and this is the first one we’ve had where it stayed this cold.

“When it gets below 20 (degrees), the salt just does very little good. We had days where it didn’t get above 12.”

Schulte added, “The temperatures really hurt us. When temperatures dip into the single digits and low teens, they really limit the effectiveness of salt/calcium chloride treatments. Even though we had a lot of snow come down Wednesday night, temperatures were a bit warmer, so the salt helped keep roadways slushy, making removal easier for plow operators. When we get a hard layer of ice on the roadways like we had earlier in the week, it becomes very difficult to remove.”

Cook pointed out that oil and chip roads and gravel roads cannot be treated with salt due the adverse effect it has on those surfaces.

“We really don’t have the equipment to move this much snow,” Cook said. “I tell the public … all we have is four-wheel drive trucks. We don’t have any super trucks.”

Cook has $5,000 budgeted each year for salt, with the cost of that salt currently at $89 per ton.

“The last three years, we haven’t much winter (weather),” Cook said. “So, I had some saved up. If not, we’d already be out.”

The Lafayette city workers operate with two salt trucks that have a snow plow attached, another truck with a plow on it and four backhoes.

“They’ve been running constantly (on Wednesday and Thursday),” Wilmore said. “We got every road clean that we know about in town (by Thursday evening).”

“We cycle how we’re needed,” Brown said. “We’ve been taking shifts. A couple of nights, we haven’t gotten home until 4 or 5 o’clock in the morning. We want to make sure the people can get out. We’re doing the best we can.

“I can’t say enough about the guys the past couple of nights … and they’re wanting to do it.”

The 24 Macon County Highway Department employees who were out in the elements worked approximately 10-hour shifts throughout the week, but for the most part, they stopped working at sundown due to limited visibility.

“We’re rotating some,” Cook said. “We work as long as we can see.

“They get worn down. It’s been rough on them. Thank goodness we have a bunch of good employees.”

Red Boiling Springs has one salt truck with a directional snow plow on it, and it also utilizes a backhoe.

“We picked it up on Monday morning, and I don’t think we’ve had a break since then,” Brown said last Thursday afternoon. “Last night (Wednesday) was probably the worst, because the snow got heavier as it went on.

“We circled every neighborhood multiple times. That’s all of us. The state guys don’t just pass by your house once. They go by multiple times. We have them (the streets) in good shape.”

Despite the limited resources and limited number of employees, Brown said that the city employees worked well together.

“We work with the police department too,” Brown said. “They’re kind of our eyes and ears. We’re doing the same exact thing as other utilities. We’re all doing it together. The mayor of Red Boiling Springs (Kenneth Hollis) has been extremely supportive. He’s watching it like a hawk. He’s been very involved in this, wanting to make sure everybody is taken care of.”

Brown said that the employees kept a willingness to do whatever it takes to better the conditions for area residents.

“If somebody is stuck, you try to pull them out and get them on their way,” Brown said. “It’s just whatever needs to be done here. That’s the beauty of a small city. You get experience in all facets.”

Cook added, “We do the best we can. Sometimes, it gets so slick, we have to walk and put it out by hand.”

Those slick conditions aren’t just dangerous for motorists but also for the highway department employees.

“I tell them to watch and be careful,” Cook said. “When you’re on slick roads … we’ve lost two salt trucks over the years. We’ve had a (road) grader slide off the road.

“We’ve been pretty lucky this year. We’ve had a grader stuck a time or two.”

The respective crews were benefitted significantly by the sunshine that appeared on Friday and Saturday and the consistently rising temperatures.

“If the sun shines, it will help you with the roads,” Cook said.

Despite the intense work load for the city employees, Wilmore sees the positive aspect of the snowfall.

“Here’s the way I look at it … we’ve got kids in this town who have never seen a snow like we had last (Wednesday),” Wilmore said. “I’m kind of glad it fell like it did for the kids.”