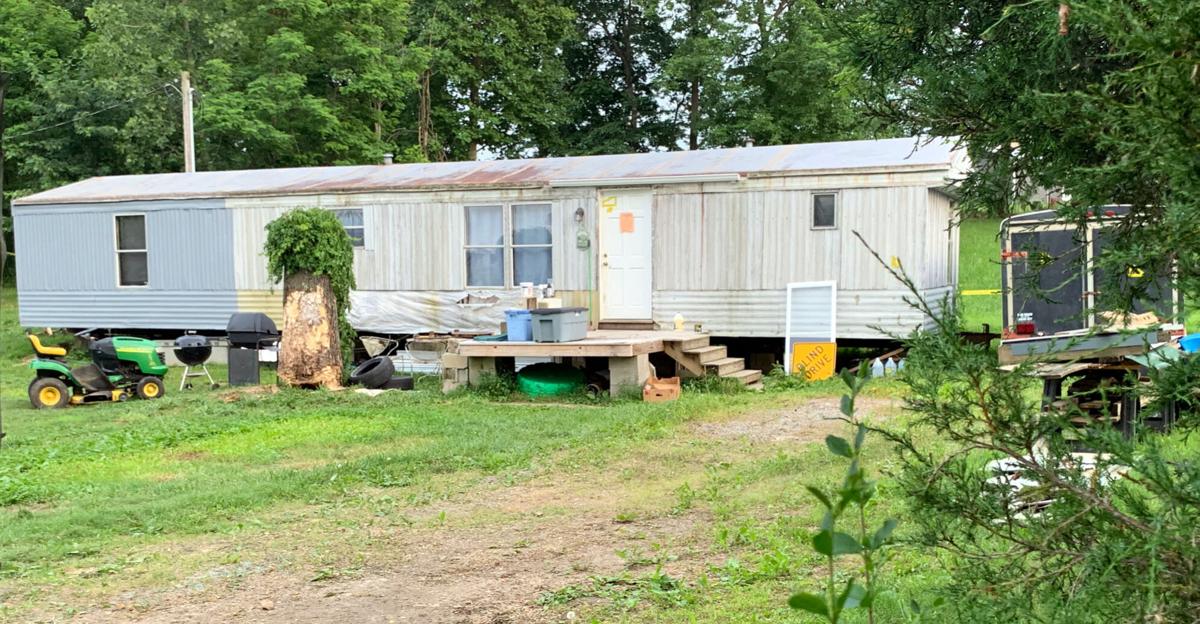 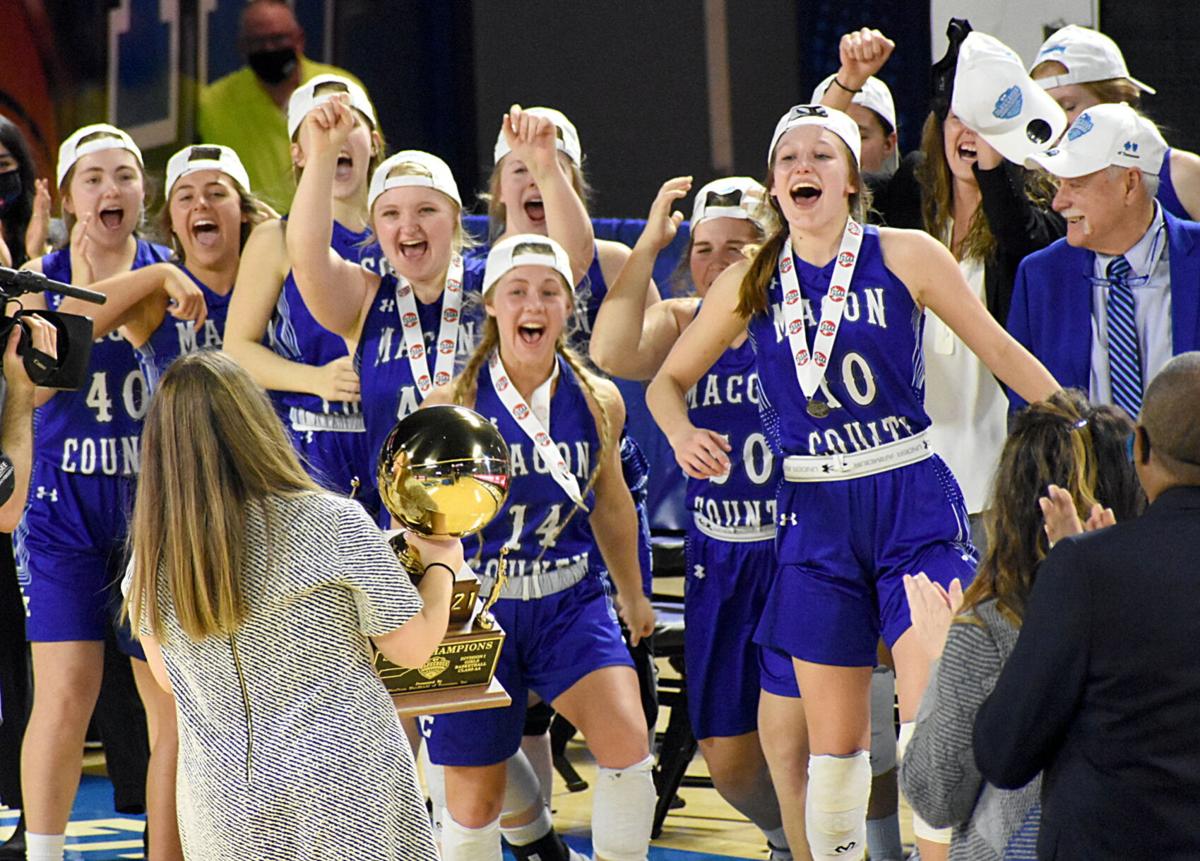 The Macon County High School girls basketball players celebrate as senior manager Allye Morgan brings the state championship trophy back to the bench after the Tigerettes won the Class AA state title with a 51-40 win over Grainger on Saturday afternoon. 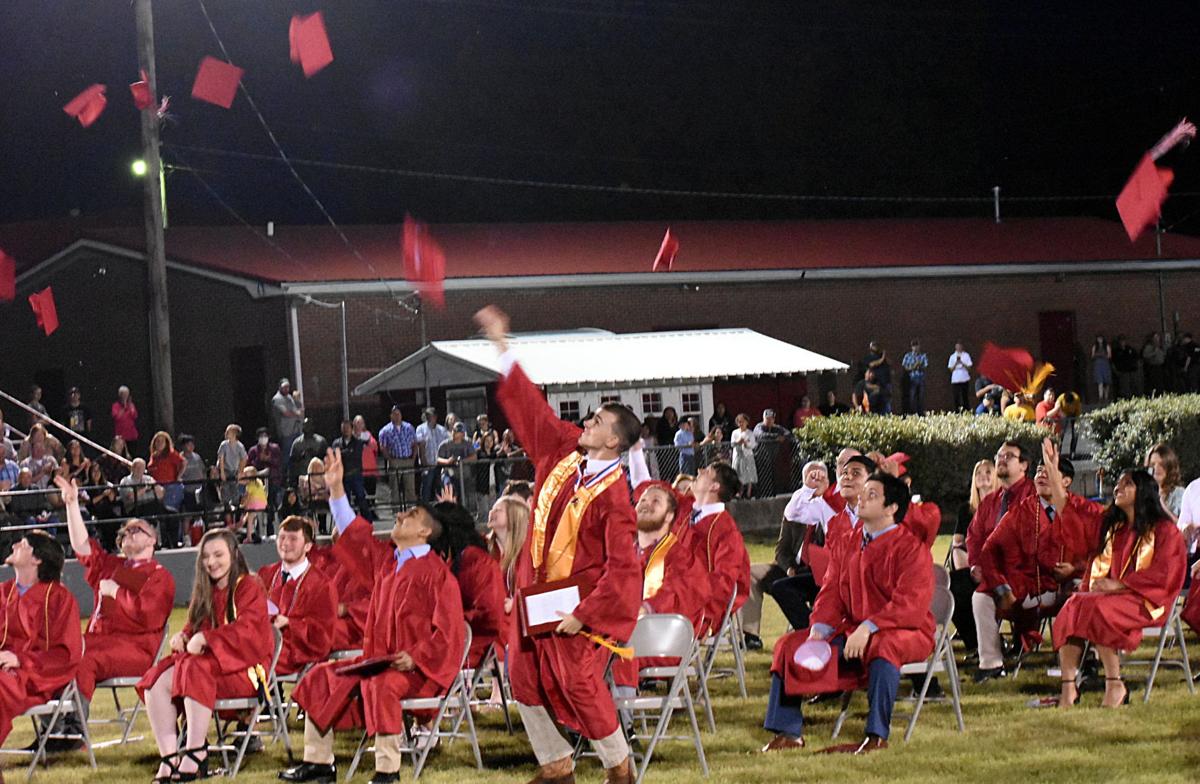 The seniors toss their caps into the air at the conclusion of last Thursday evening’s Red Boiling Springs High School graduation ceremony, which was held on the school’s football field. 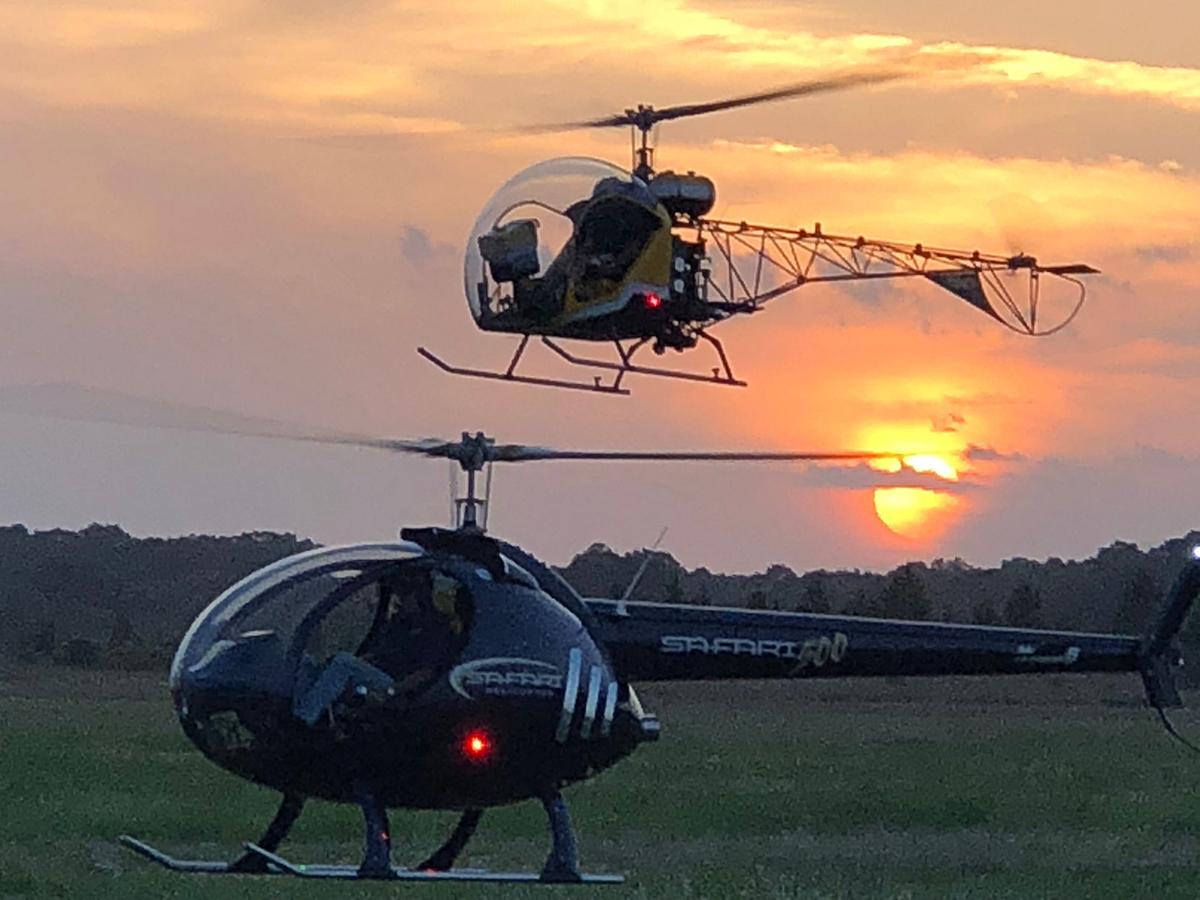 Safari Helicopter announced in 2021 that is was already in the process of moving its company to Macon County, which will be located at Lafayette Municipal Airport.

The Macon County High School girls basketball players celebrate as senior manager Allye Morgan brings the state championship trophy back to the bench after the Tigerettes won the Class AA state title with a 51-40 win over Grainger on Saturday afternoon.

The seniors toss their caps into the air at the conclusion of last Thursday evening’s Red Boiling Springs High School graduation ceremony, which was held on the school’s football field.

Safari Helicopter announced in 2021 that is was already in the process of moving its company to Macon County, which will be located at Lafayette Municipal Airport.

In 2021, there were plenty of events, plans and accomplishments throughout Macon County. Plenty of newsworthy events took place throughout the county — from the on-going Covid-19 battle to the Macon County Tigerettes finally winning a state basketball championship to plans moving forward to build a new elementary school in Lafayette, and that was only the first half of the year. In this week’s edition of The Times, we take a look back at some of the most notable events of the first half of 2021 from January through June. Next week, we will examine the major news items in the community from July through December.

January• With the Covid-19 pandemic raging at the start of the new year and with the vaccines being newly developed, the Macon County Health Department announced that it had received 200 doses of the vaccine around Christmas and a second shipment of 100 doses arrived early in January.

• Browning’s Livestock celebrated its 20th year in business with a celebration that included the Macon County Cattlemen’s Association and cattle producers from surrounding counties.

• A Lafayette woman faced arson and drug charges after authorities came to a fire at here Kirbytown Road residence and found a rug with several burned matches around it. Stacey Danyail Satterfield, 43, was charged in the Jan. 6 blaze.

• Macon County High School girls basketball coach Larry White was recognized for his 700th coaching win before the start of a home game vs. DeKalb County. White, who coached many years at Red Boiling Springs, before coming to Macon County, got win No. 700 in a Christmas classic in Murfreesboro against Blackman in late December.

• The Macon County School Board discussed a proposed new elementary school and working with the Macon County Commission to get them to help approve funding for a project that has been on the drawing board for five years following a sales tax hike that was voted on to help fund the construction of the school.

• Two people were hospitalized as a result of a four-car crash on Highway 52 near the intersection of Old 52 early in the morning around 6 a.m.

• In a couple of basketball milestones, Macon County’s Abby Shoulders and Red Boiling Springs’ Liz Anderson both scored their 1,000th points of their respective high school careers. Anderson did it on Jan. 2 against Clarkrange, and Shoulders did so on Jan. 26.

February• Three lives were lost in a house fire in Red Boiling Springs on Feb. 2 as the father, Austin Reid, stated that his five-year-old daughter woke him up allowing him and his son to make it out of the fire. However, when he went back to the house to try and rescue his daughter, wife and other son, he was unable to as they perished in the blaze.

• The Macon County School Board discussed the later proceeded to take out an option on just over 100 acres of land near Macon County Junior High as a possible site for the proposed new elementary school.

• Jalynn Gregory scored her 2,000th career point for the Macon County Tigerettes and was named a finalist for Miss Basketball in Class AA.

• Two Smithville men were arrested following a situation that spanned more than six hours overnight where they exchanged gunfire with Macon County Sheriff’s deputies in the incident..

Jere Raymond Green, 22, and Chad Reynolds, 46, faces a series of charges following the incident, which took place in Lafayette.

According to information provided by the Macon County Sheriff’s Department, law enforcement became involved when a 911 call was received shortly before 1 a.m., and Reynolds was finally taken into custody at approximately 7:30 a.m., concluding the search.

March• The Macon County Tigerettes, denied a chance to win the Class AA state basketball championship the year before due to Covid-19 canceling the state tournament, finally got another shot and brought home a state title to Lafayette. Coach Larry White’s squad defeated Covington and Northview Academy in the tournament before downing Grainger in the title game to win the championship.

• Newly elected councilman Bryan Nichols had to resign his seat when he moved outside the city limits into a different portion of the county.

• The school board delayed the land purchase of the new elementary school when the owner of the property had some issues with capital gains taxes.

• The mother of a four-month-old child was arrested after she allegedly left her child in the vehicle after she had a wreck as her vehicle landed in a creek. Savanna Rice, 23, of Scottsville, Kentucky, was hit with a series of charges following the incident that took place on Green Valley Road. The child was rescued from the vehicle. Officers found a gun was found in the child’s diaper bag and meth was found in the vehicle, and Rice appeared to be under the influence.

April• County Mayor Steve Jones announced that a traffic light at the intersection of Highway 52 and Ellington Drive in Lafayette would be installed and operational by late spring to early summer.

• A Westmoreland woman, Carol Watkins, was unable to escape from the Hicks Hollow Road residence and died in a house fire on April 1.

• The Macon County Commission revealed plans at the April 5 meeting to pursue the possibility of purchasing the Rite-Aid Building on Highway 52 as a possible place to relocate county offices.

• The Macon County School Board voted to approve an option to buy agreement for the new elementary school. The option to buy included updated figures on the total price of the 101.84 acres. The total price the board approved was $2,444,160 at $24,000 per acre. Macon County Director of Schools Tony Boles told the board that this was an increase of $254,600. He also told the board that, as of January, $2,286,116.89 had been collected in sales tax to go toward the new school.

• A manager at the Red Boiling Springs Dollar General store was arrested following an investigation regarding missing money.

Martha Patterson, 35, was charged with theft after more than $11,000 was reported missing. According to the arrest report, there was missing money from the daily deposits, which the district manager discovered.

• Five Macon County residents were arrested and charged attempted murder and kidnapping by the Tennessee Bureau of Investigation.

• Macon County and Lafayette city officials hoped to use the Covid-19 relief funding for a variety of projects with the money recently-enacted American Rescue Plan of 2021.

The $1.9-trillion bill that Congress enacted last month contains $362 billion in relief funds for state and local governments across the nation. The funds are designed to be allocated based on the number of unemployed citizens in each state at the end of 2020. Macon County received $4.7 million, while Lafayette received $1.4 million.

The funds — which must be used for non-recurring expenses — can be used on street projects, upgrades to water and sewer infrastructure, information technology upgrades and for public-safety concerns (which includes law enforcement and fire and emergency response matters).

• The Macon County Commission named Dale Hix to serve on the Macon County School Board at its meeting that was held on April 19. Hix resides in the area of Macon County that includes districts 9 and 10. Bryan Nichols ran unopposed in last August’s election, earning him a second four-year term, but had to give the seat up when he moved to a new district.

• With the proposed new elementary school property purchased, the Macon County School Board decided at its May 10 meeting that the new school would house students from pre-k through fifth grade.

• Safari Helicopter Co. announced plans to move its operations to Lafayette, and will operate out of a facility on the grounds of the Lafayette Municipal Airport. The company will bring with it 85 new jobs to Macon County.

• Seniors from the Class of 2021 graduated at both Macon County High School and Red Boiling Springs High School. RBS graduated on May 20, MCHS the following day.

• A Lafayette man was taken into custody last Wednesday after allegedly violating a woman while she was sleeping. Rocky Allen Jent, 34, is charged with rape following the incident. According to the arrest report, the incident actually occurred on May 14 at a Coolidge Road residence.

• Cindy Ford of Westside Elementary School was chosen as the Macon County Teacher of the Year.

• Macon County High School principal Ben Johnson announced his resignation from his position at the end of the school year. Johnson was only on the job as MCHS principal for 10 months after he succeeded B.J. West, who had resigned and eventually took a job with the Trousdale County School System.

• Macon County’s Abby Shoulders was selected as Miss Softball, one of 11 players to receive that honor statewide, for her play for the Tigerettes softball team.

• Macon EMS director Randy Carter spoke about the unit getting back to being fully staffed after being short-handed for much of 2020 due to layoffs related to the Covid-19 pandemic.

• Two people, including 15-year-old Lorena Orduna Martinez, drowned tragically in an incident at the Shiloh swimming hole on June 11. Lopez Gomez Gaudencio, 32, also died in the drowning that took place on Clifty Road in Macon County.

• A Westmoreland man, 48-year-old Nathaniel Damien Raabe was killed, and Macon County Sheriff’s Department Sgt. Kyle Petty suffered two gunshot wounds in a shooting June 15 on West Stinson Road in the western part of the county. Macon County Sheriff’s Department deputies were dispatched to 1747 West Stinson Road in Westmoreland, which is in Macon County, due to reports of Raabe walking down the road with a gun and causing a disturbance. Raabe had a gun pointed to his head, and then reversed it, and fired shot, hitting Petty in the leg and back. Petty was life-flighted to Skyline Medical Center and treated for his injuries. Raabe was shot, went back inside the house, and was later found deceased in the home.

• The annual Hillbilly Days Celebration was held in Key Park in Lafayette.