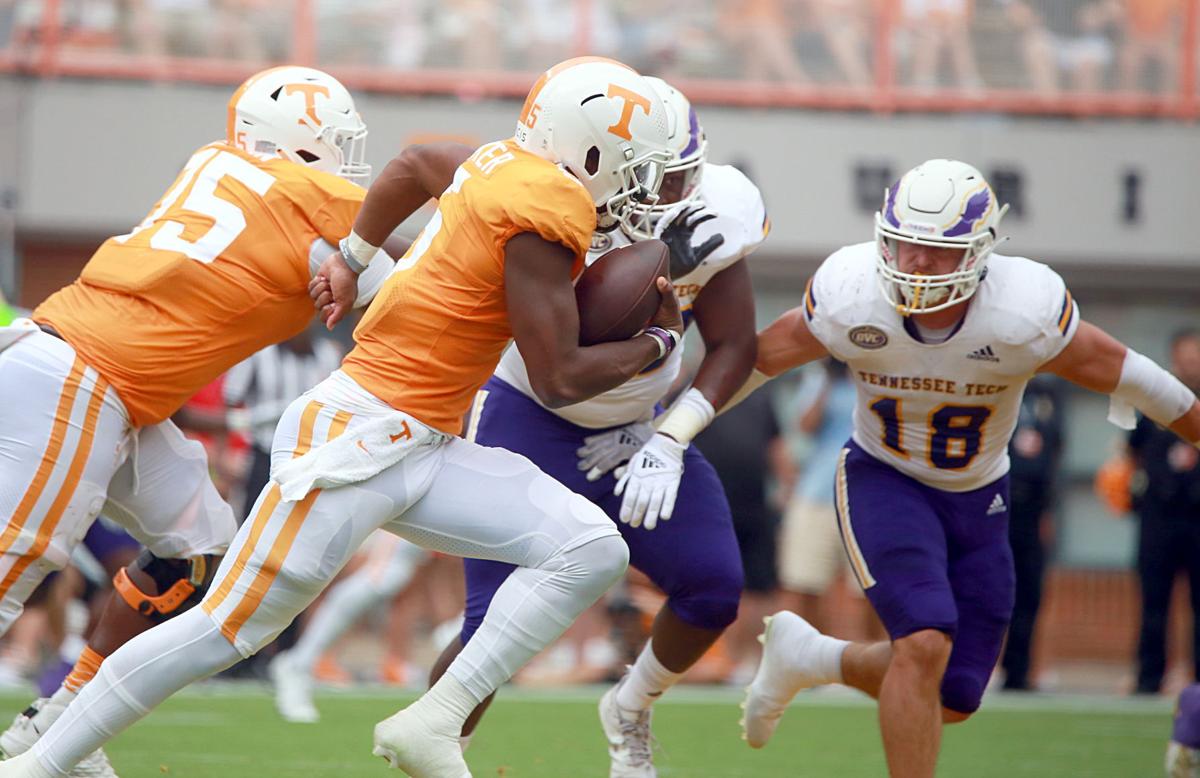 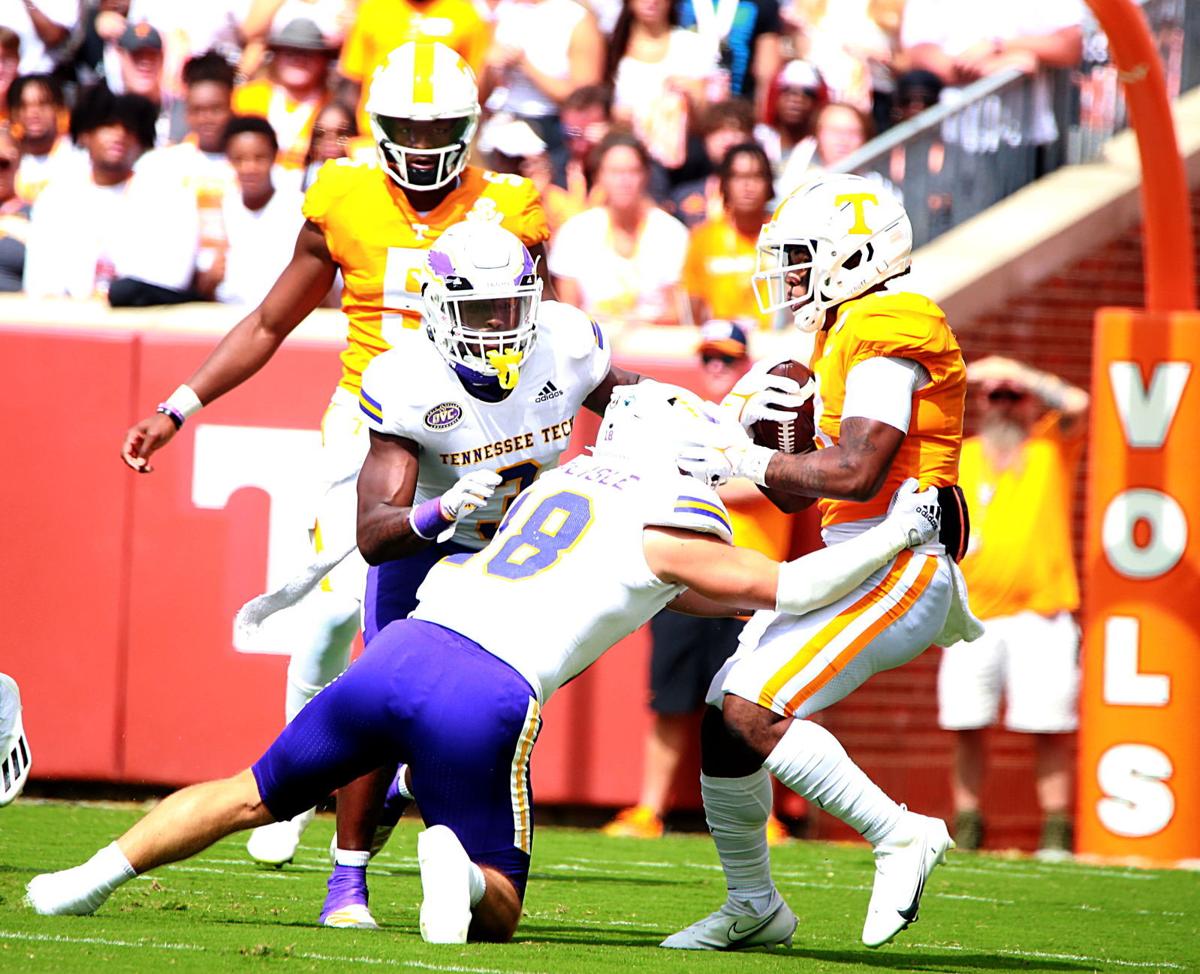 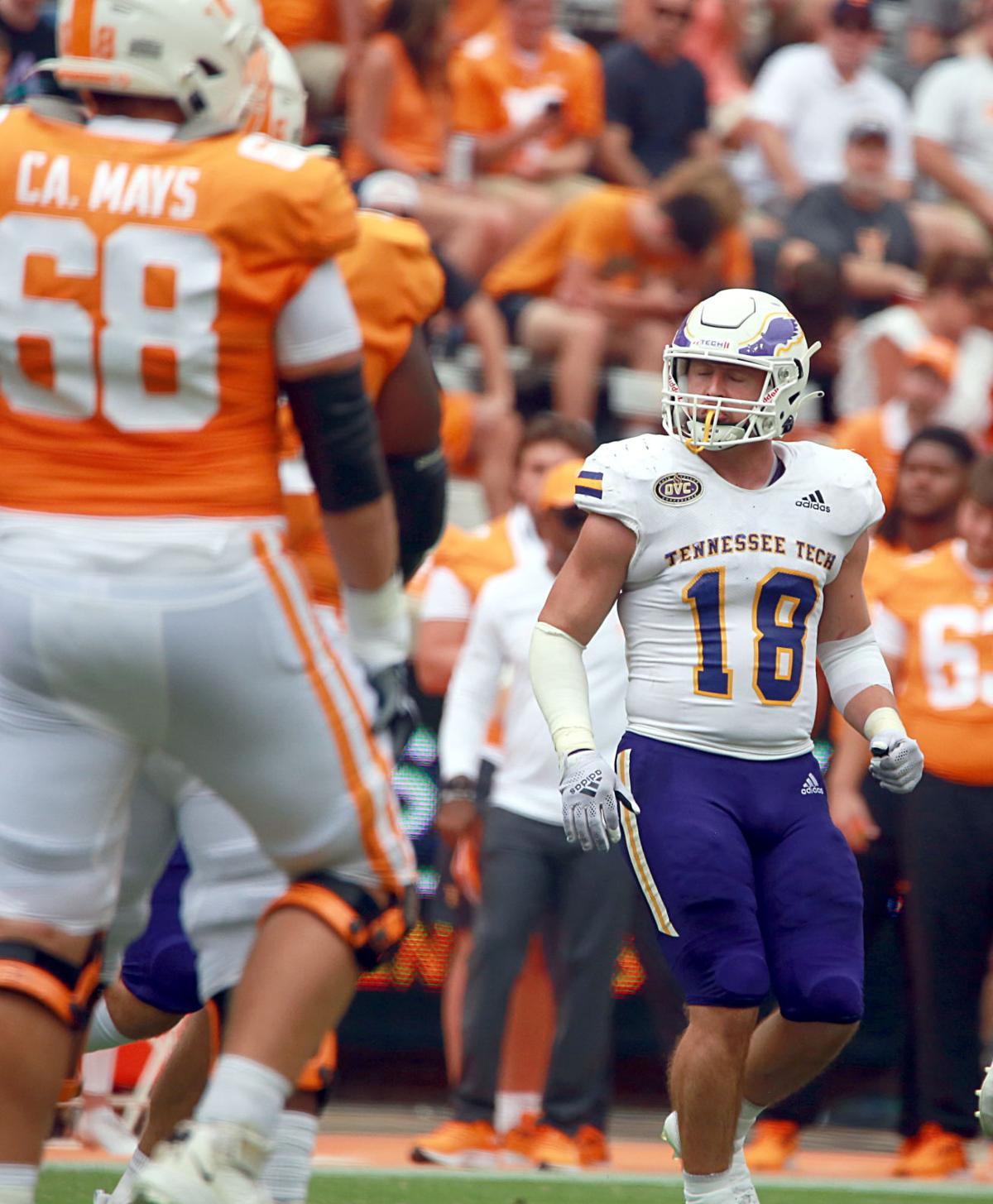 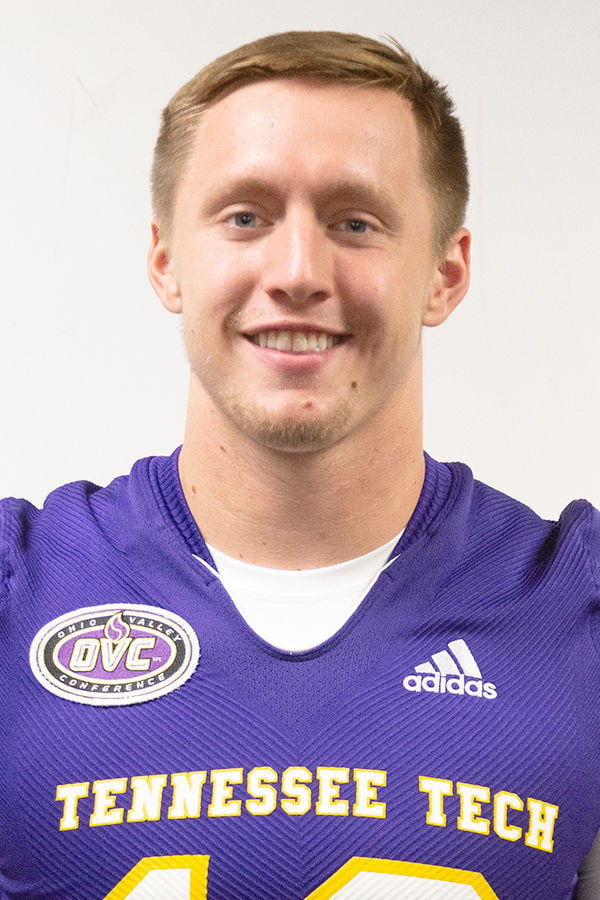 Seth Carlisle doesn’t have priceless memories of being in Neyland Stadium as a kid.

However, he does remember occasionally being among the 100,000 fans encircling Shields-Watkins Field to watch the University of Tennessee football team.

“I didn’t get to make it to just a ton of games,” Carlisle said. “I got to come a few times as a kid. It was a really neat experience. I got to come with one of my best friends in high school. His family always had season tickets.

“I can’t really speak as much as probably Jack (Warwick, an Alcoa High School product who is Carlisle’s fellow linebacker at Tennessee Tech University) or other guys who lived close could, but it was definitely a neat experience.”

Carlisle was back in Neyland Stadium on Saturday morning with the best seat in the house this time … with the former Macon County High standout serving as a starting linebacker for the Golden Eagles, who suffered a 56-0 loss to the Volunteers.

“It was definitely a cool trip, just being from Tennessee,” Carlisle said. “I was never a fan of just one school, but I got to come to a few games as a kid just to experience the atmosphere.

“The whole team, any time you get an opportunity like this, all of our guys were really excited. I feel like that showed, especially at the beginning of ballgame. We come out and make some plays, but, as coach (Dewayne Alexander) alluded to, we had to make the big ones and keep them from making the big ones.”

“It was a good experience,” Carlisle said. “There’s a lot we can learn from this. Obviously, it’s not what we came here to do and not the outcome we wanted, but there’s definitely a lot we can take and grow from this season to get it done in the OVC (Ohio Valley Conference). That’s what we’re going to do.”

Carlisle is in his fourth season as a Golden Eagle and third as a starter.

He entered the program at same time as did Alexander, a former Cumberland University head coach who then spent one season as the offensive line coach at East Tennessee State University before arriving in Cookeville.

“Seth was a tremendous quarterback in high school,” Alexander said. “I had recruited Seth whenever I was an assistant coach at East Tennessee State University and brought him up to a camp there. When I got the head coach job at Tennessee Tech, he was one of the first guys I went to see and recruit.”

However, in addition to that production, Alexander remembers Carlisle as a high-school “kid,” though he indicates that there was nothing childlike about his behavior.

“The thing that stood out about Seth … and the reason why he is such a good football player is that he is always a leader and a young man of character,” Alexander said. “He was a leader at his school. You go to his school, and you visit with his coach (former Tiger head coach Nathan Wilson), and you visit with all the people there in the faculty, and they go, ‘Hey, are you here to talk with Seth Carlisle? He is one of the best young men we’ve ever had to come to school here’ … and that’s what he’s done at Tennessee Tech. That’s the biggest reason he has progressed.

“He works so hard. He’s so coachable. He’s just a first-class young man … on the field … off the field. He does community service. Academically, he’s a 3.7 (grade-point-average) student. He’s all of those things. He works hard. He represents Tennessee Tech in what Tennessee Tech is all about as good as anybody we could ask for.”

That progress that Alexander speaks of began as he made 27 tackles as a freshman before recording the second-most tackles (88) on the team as a sophomore, to go along with three interceptions.

Then, though his junior season was moved from last fall to this spring due to the COVID-19 pandemic, he led the team over that seven-game span with 50 tackles. As a result, Carlisle received what is considered to be the highest honor for a Tennessee Tech football player at the conclusion of the team’s spring season, being given the Robert Hill Johnson Award.

Through three games this fall, Carlisle — who was also selected to represent the conference on the National Collegiate Athletic Association (NCAA) Division I Football Oversight Committee — ranks second on the team with 23 tackles, four fewer than redshirt junior defensive back Josh Reliford.

“It’s definitely different going from being a freshman just trying to get on the field any way you could to now being the guy — as an older guy — that people look to for that motivation,” Carlisle said. “I’ve never been a big rah-rah guy or a big speech guy, so really, all I look to do every day in practice or at camp and in the weight room is to carry myself in a way that lets other people know how to do things the right way. I know that other guys are looking, and some guys are still trying to figure out how everything works. I just try to carry myself every day in a way to let people know how things are supposed to be done. That keeps me held accountable as well, in knowing that I have to do that every day if I expect them to progress and be the best they can be.”

In opening the season with losses to Samford (Alabama) University, Furman (South Carolina) University and Tennessee, the Golden Eagles have been outscored by a combined margin of 134-14.

Now, Tennessee Tech will shift its focus to conference play as six of its final eight games will be against OVC foes, beginning with Saturday’s conference opener against visiting Eastern Illinois University.

“It’s the same as we do every week,” Carlisle said. “They (the Vols) are a good football team. Not to take anything away from them, but it was really just — and it’s the way it’s been these first three games — it’s stuff we’re doing to ourselves.

“Speaking from the defense’s side of the ball, we have to make tackles. We can’t have missed tackles, and we have to limit the big plays. Today, we were able to get a turnover and create a big play on defense (a fumble recovery and 35-yard return by sophomore defensive back Cameron Hudson), but at the end of the day, if we’re not making tackles and executing the game plan … that’s how you get it done. That’s things we have to do better. It’s small things, but at the same time, those small things add up. We’re so close. We have good game plans. We just have to execute them better as players. It’s really that simple. It’s stuff we have to get done. It’s stuff we learned on day one of (fall) camp. We just have to be more consistent in doing that.”

Though he’s on target to graduate in December with his bachelor’s degree, Carlisle will be eligible to play a fifth season next fall due to the extra season of eligibility that college athletes are granted due to the COVID-19 pandemic.

So, those who have witnessed Carlisle’s progression since he was a kid — and also during his career at Tennessee Tech — may get some additional opportunities to watch him play.

Carlisle could make a few more memories as well.

“I had a lot of people texting me yesterday and the first thing this morning just wishing me good luck, people from back home and people from Cookeville,” Carlisle — who recorded six tackles (two solo) on Saturday — said. “Obviously, my family got to come (to Knoxville for the game). It was great to have them here. I wish we could have put on a better show for them, but I think we went out and played with energy. We just didn’t get the job done at the end of the day.”