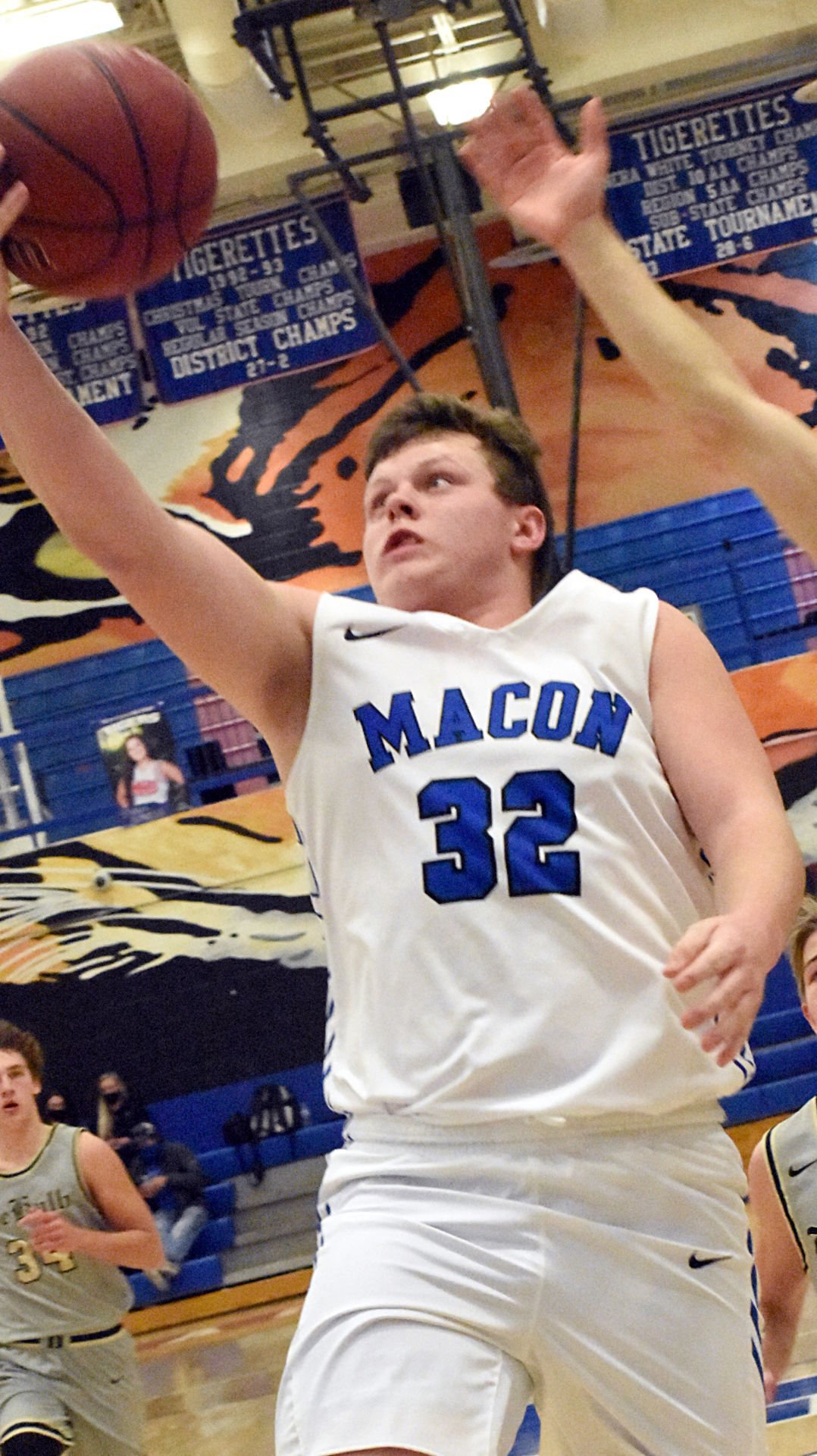 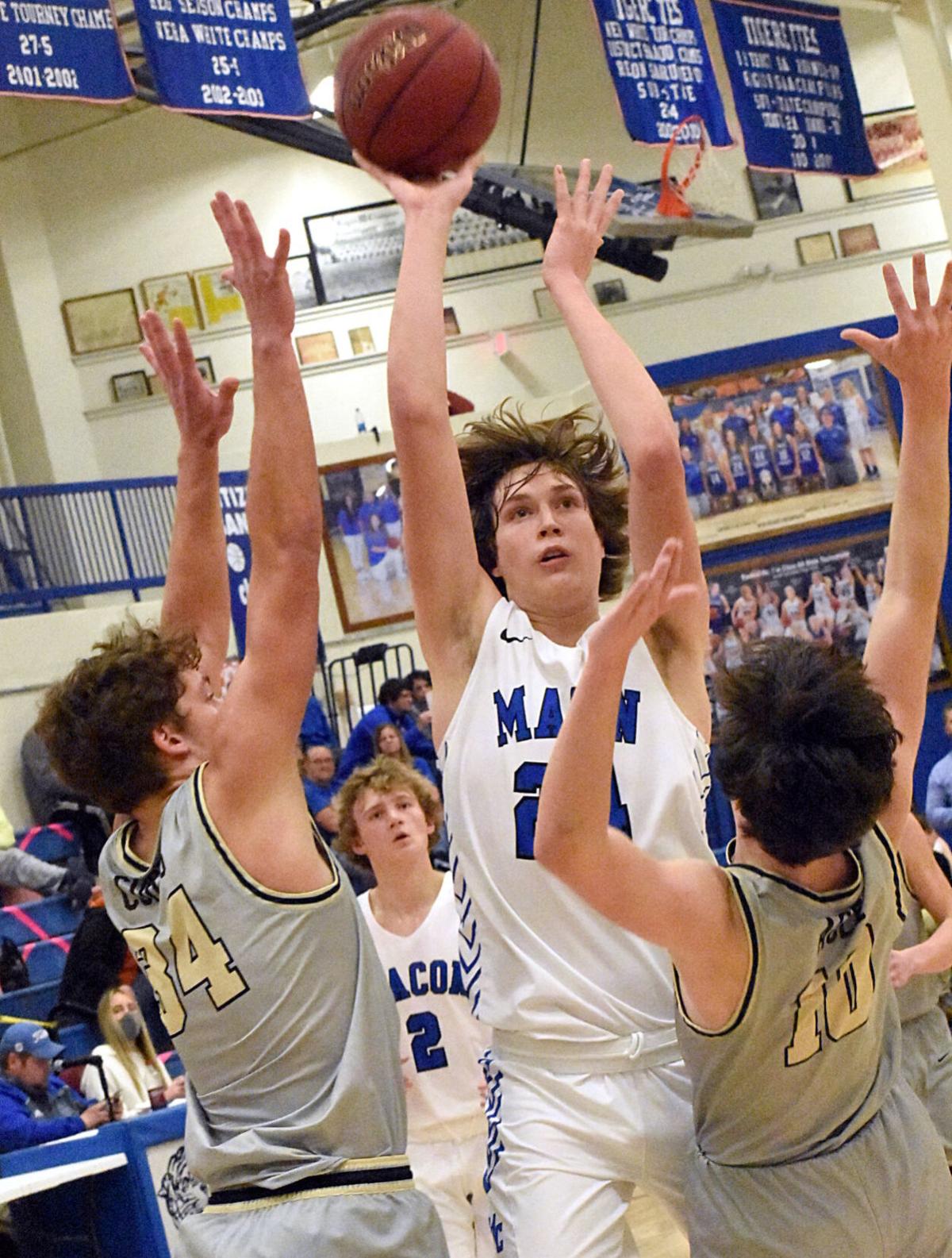 “We battled super hard,” Macon County head coach Adam Bandy said. “We haven’t gotten over the hump. We just haven’t figured out how to win games. We just have to go get them … make plays late. We made some great plays … we just fell a little short.”

Macon County (2-9 overall, 0-5 in District 8-AA) missed two front ends of bonus situations at the free-throw line over the last 2:15 of regulation.

However, DeKalb County (5-7, 2-4) returned the favor in the final minute of regulation, missing the second of a pair of free throws and then misfiring on the front end of a bonus situation with 24.7 seconds showing.

Ten seconds later, Macon County junior Braydee Brooks drained a 24-footer from the top of the key to tie the contest and force overtime.

Jones scored 15 of his game-high 28 points in the first half.

“It’s tough,” Bandy said of the match-up problem that Jones presented. “We all tried to help in and root him out as far as we could. The biggest thing is his offensive rebounding. He does a great job of getting inside position.

“Jones is going to play offensive tackle for Tech next year. He plays his role well. We did a better job of rotating in on him in the second half.”

Then, Brooks pulled up in transition and made a 16-foot jump shot to give his squad a 62-61 lead.

However, following a timeout, Jenkins was open from the left wing for a wide-open 3-pointer and converted with 16 seconds remaining.

Macon County senior Connor Johnson released a 3-pointer with five seconds remaining that came up short, and although DeKalb County’s Stetson Agee missed two free throws with 3.2 seconds showing, the rebound ricocheted off to Agee to allow time to expire.

“We got a great look at the end,” Bandy said.

Macon County led throughout the first quarter as Brooks scored seven points in the period.

“He’s done it the last two or three games,” Bandy said of Wix’s play. “He and (freshman forward Dalton) Hudson have been playing well.

“Wix played well tonight. He’s my energy guy and athletic guard who can defend a little bit and make plays.”

DeKalb County surged in front on one of Agee’s five 3-pointers midway through the second stanza and extended it to six points (36-30) by halftime.

Jones converted a three-point play late in the third quarter to create a seven-point margin (48-41).

However, three-point plays early in the final period from Brooks and Hudson and a 3-pointer from Johnson helped Macon County tie the contest at 50 with six minutes remaining.

“Dawson (Shrum) found out this afternoon that he may be done for the season (due to an injury). That changes the rotation, but (sophomore guard) Rawley Ritchie came in and had some good minutes for us.”

“We were a different team after we beat White House the other night (a 58-55, road win on Jan. 5),” Bandy said. “Our practices are good. We battled with York and had it close the whole game. It was a five-point game with a minute and a half left. We battled.

Brooks and Johnson combined for 12 points in the first quarter to help Macon County out to an 18-9 lead, and Brooks poured in 13 points in the second stanza as the Tigers led 35-30 at halftime.

However, Jon Heddings produced 11 points in the third quarter as the Dragons surged out to a 45-39 advantage entering the final period.

Then, Heddings, Bryson Bilbrey and Nic Smith combined for scored all of York Institute’s points in the fourth quarter.

The Dragons made 6 of 8 free-throw attempts over the final eight minutes.

The Tigers attempted just four free throws in the contest, connecting on all four.

The rest of the Tiger scoring is as follows: Johnson 8 points, Cody Cothron 4, Hudson 2, Shrum 2 and Kenny Wilder 2.

Heddings finished with a team-high 21 points, and Bilbrey and Smith provided 15 and 14 points, respectively.