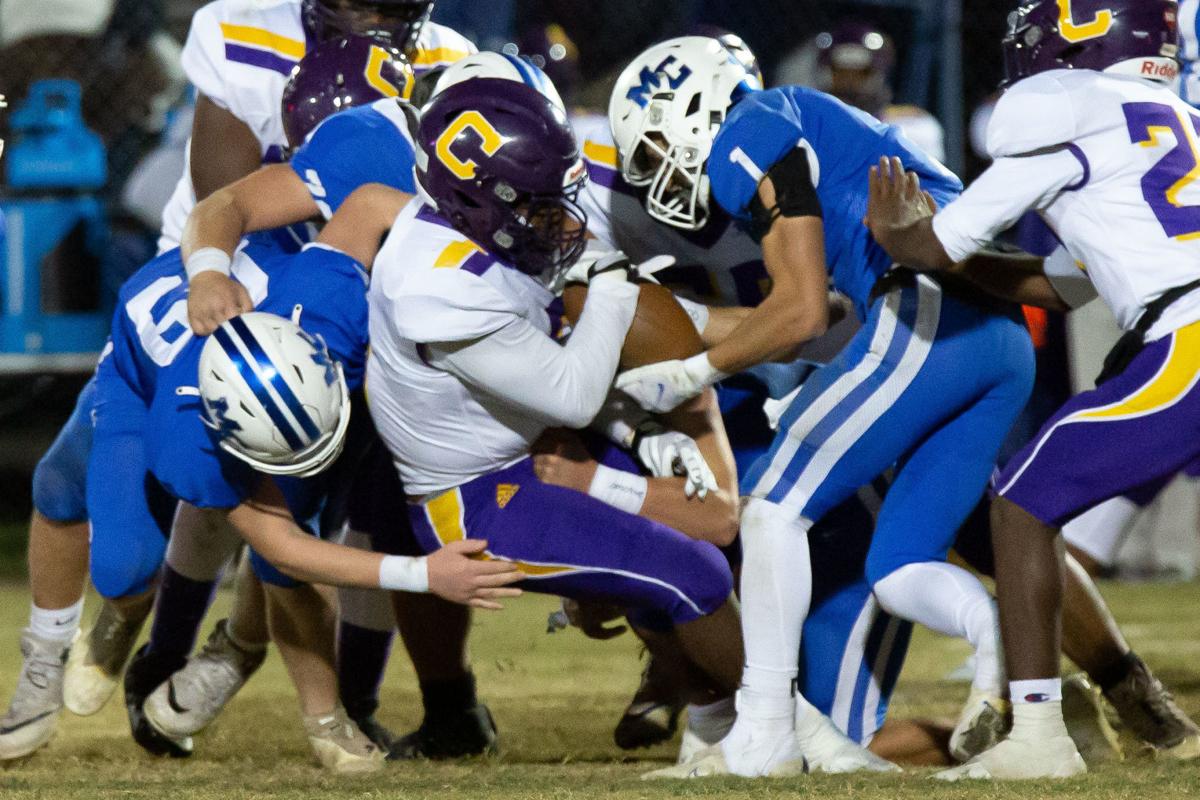 Left: Landon Colter rips a ball out for the Tigers against Chattanooga Central in Macon County’s playoff win Friday night. 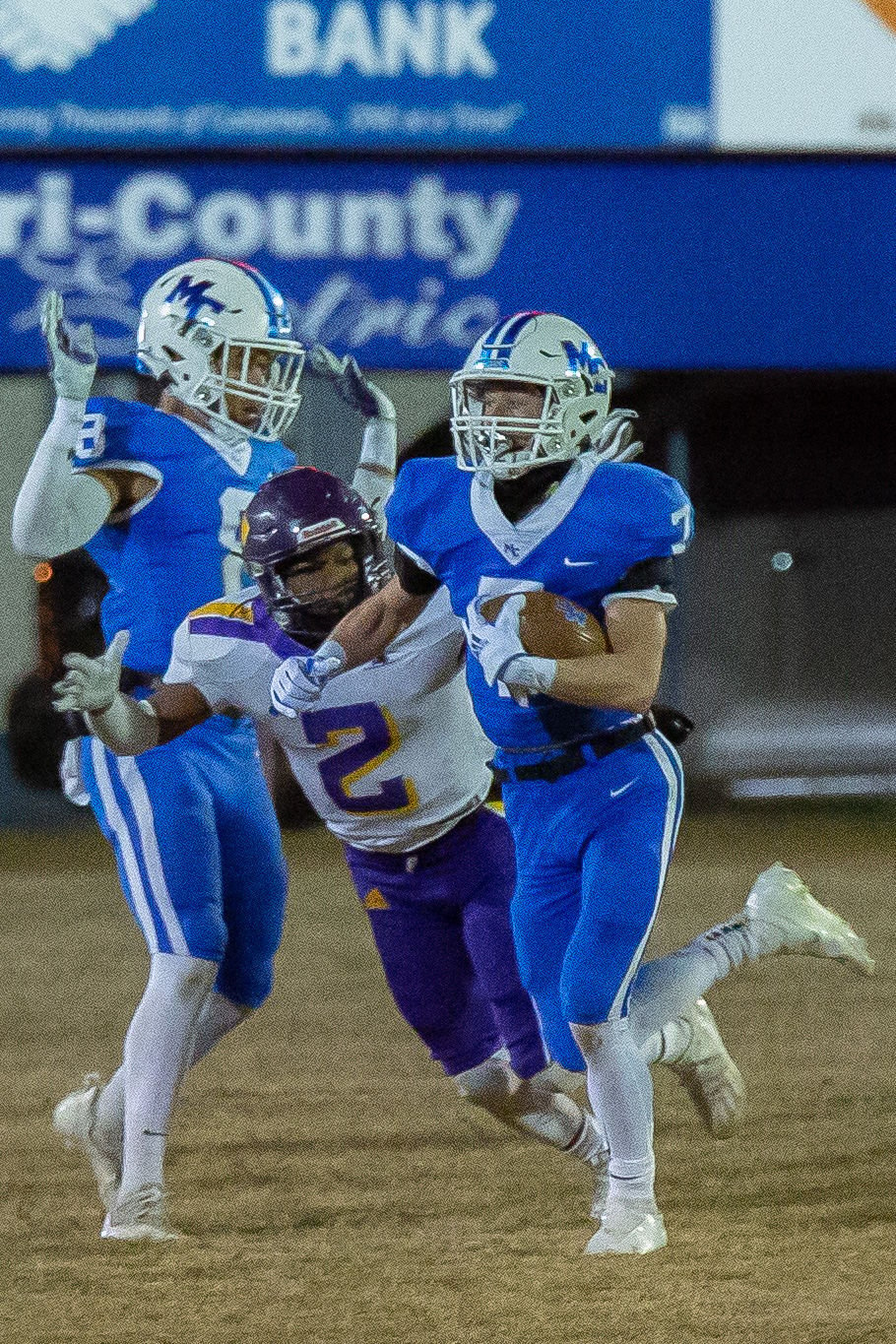 Gabe Borders heads for a TD for Macon County against Chattanooga Central. 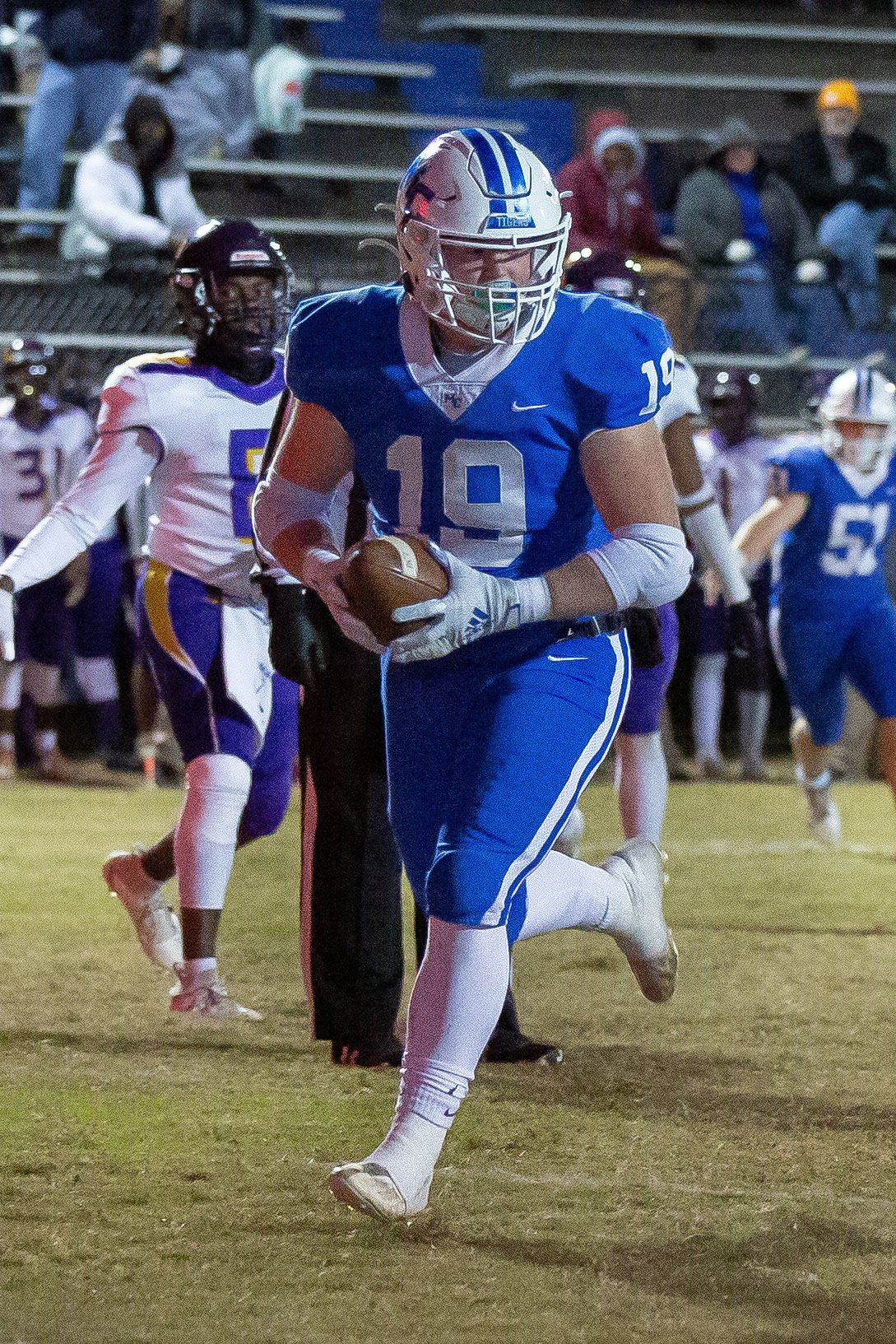 Above: Brody Clariday scores for the Tigers against Chattanooga Central.

Left: Landon Colter rips a ball out for the Tigers against Chattanooga Central in Macon County’s playoff win Friday night.

Gabe Borders heads for a TD for Macon County against Chattanooga Central.

Above: Brody Clariday scores for the Tigers against Chattanooga Central.

Macon County High head football coach Kyle Shoulders picked up his first playoff win as a head coach after a 21-point third quarter propelled the Tigers to a 28-26 come-from-behind victory at home.

“I am super proud of my guys,” said Shoulders. “Most teams when down by two scores at the half would just accept that their season is over, but not this group. They are a special group.”

The first-round playoff game at Pat Parker Memorial Field started out slow for the Tigers when a pass interference penalty and a Pounder fourth-down conversion set up the first points of the game. A bad snap on the PAT left the score 6-0.

The Tigers started their opening possession at their own 35, but the drive ended in a punt and rolled out at the 4-yard line. But Chattanooga Central scored in five plays as quarterback Ronye Watson found teammate Donovan Smith for a 65 yard touchdown. The Pounders got the two-point conversion from running back Noah Collins to go up 14-0 with 6:33 left in the half.

The Tigers battled back and cut their deficit in half after a nine-play, 55-yard drive ended with a 22-yard touchdown pass from senior quarterback Braydee Brooks to junior teammate Nate Green. Bryson Higgins’ PAT cut the lead 14-7 with 2:43 remaining.

Chattanooga Central made the best of what little time they had left, scoring with 15.2 seconds left to push the lead to 20-7 at the half.

The Tigers set up their first possession of the second half at their own 39 yard line. A 21-yard connection from Brooks to senior running back Landon Colter on their second play of the half got the Tigers going. Following a holding penalty and incomplete pass, the Tigers faced third and 22. Freshman Gabe Borders took a pitch from Brooks looking to get around the edge, but instead he set up and fired a deep shot finding Tiger receiver Cameron Houston for the 52 yard touchdown making it a one score game. Higgins PAT makes it 20-14 with 10:07 left in the third quarter.

Central battled back and scored from 39 yards out, but the conversion attempt was no good, leaving the Pounders with a 26-14 lead.

Macon County came back, scoring on a six-play, 57-yard march when Brooks found senior teammate Brody Clariday on a 15-yard touchdown to cap the march. Higgins’ point after cut the lead to 26-21.

“My defense stepped up huge in the second half,” said Shoulders.

The Tigers took their first lead of the game with 48.2 seconds left in the third quarter, as Brooks found Green again from 44 yards out. Macon County led, 28-26.

“I have been preaching the importance of special teams since I got here four years ago, and it made the difference tonight.”

A perfect 4-for-4 performance from Tiger kicker Bryson Higgins and the failed extra point and two-point conversion attempts from the Pounders ultimately made the difference.

On the next Pounder possession, the Tigers defense came up huge again forcing a three-and-out and stuffing another fake punt attempt. The Tigers’ ensuing drive ended at the 1 yard line where Brooks is held out on a quarterback sneak attempt on fourth down ending in a turnover on downs giving the Pounders possession on inside their own 1.

Central managed to move the ball to their own 38, but then were forced to punt.

On the ensuing possession, the Tigers picked up a first down on an encroachment penalty on fourth down, but three plays later were forced to punt. The punt was blocked, setting up Chattanooga Central at the Macon County 29-yard line with 3:16 to play.

But the Tigers defense came up huge again. The Pounders first play was a trick play that backfired, resulting in a 10-yard loss.

After an 11-yard gain, the Tigers got stops from Hayden Wix on third down and Braylon Flowers on fourth down to turn the ball over on downs with 1:54 remaining.

The Tigers sealed the game by picking up a first down. It was Macon County’s first playoff win in five years.

The Tigers will Travel to Red Bank on Friday to take on Region 3-4A’s top seeded Lions in the second round of the TSSAA state playoffs.