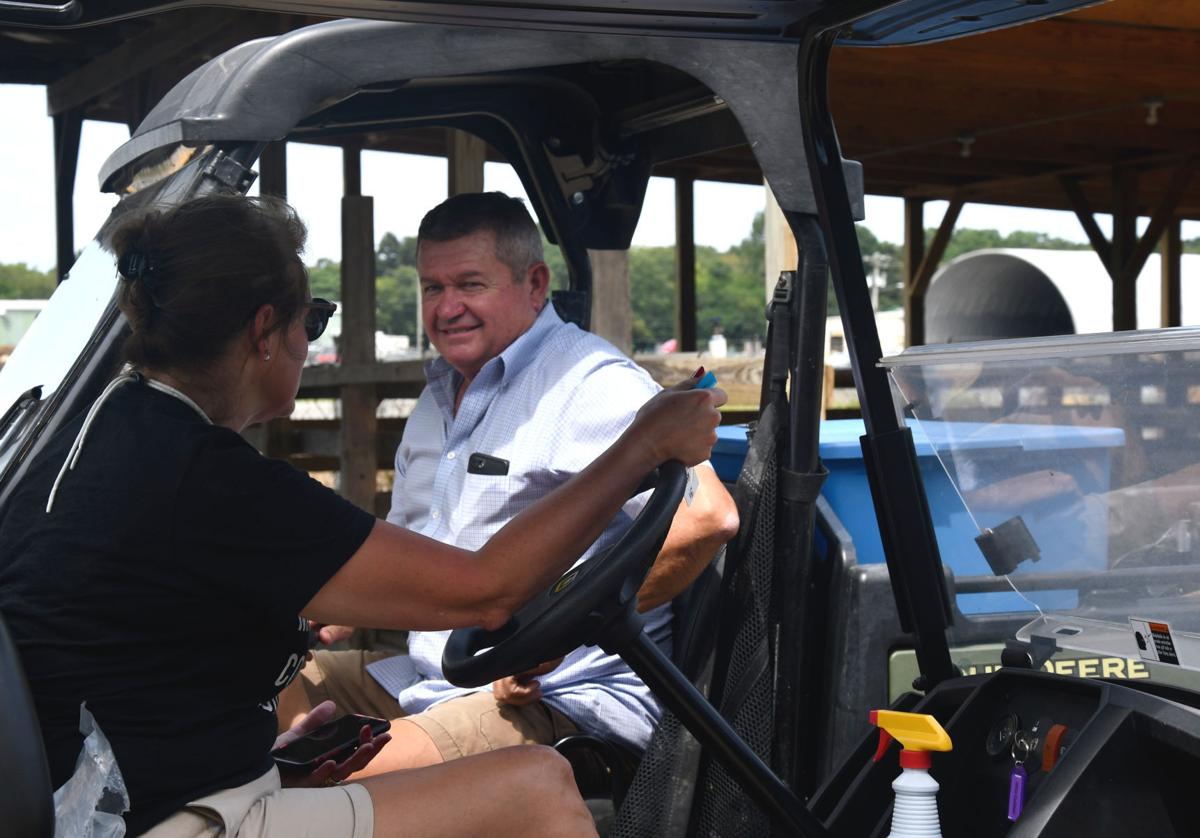 Wilson County Fair livestock shows superintendent Terry McPeak, right, talks with fair sponsorship coordinator Shari Bazydola on Tuesday at the fairgrounds. It was all hands on deck this week to get ready for the event. 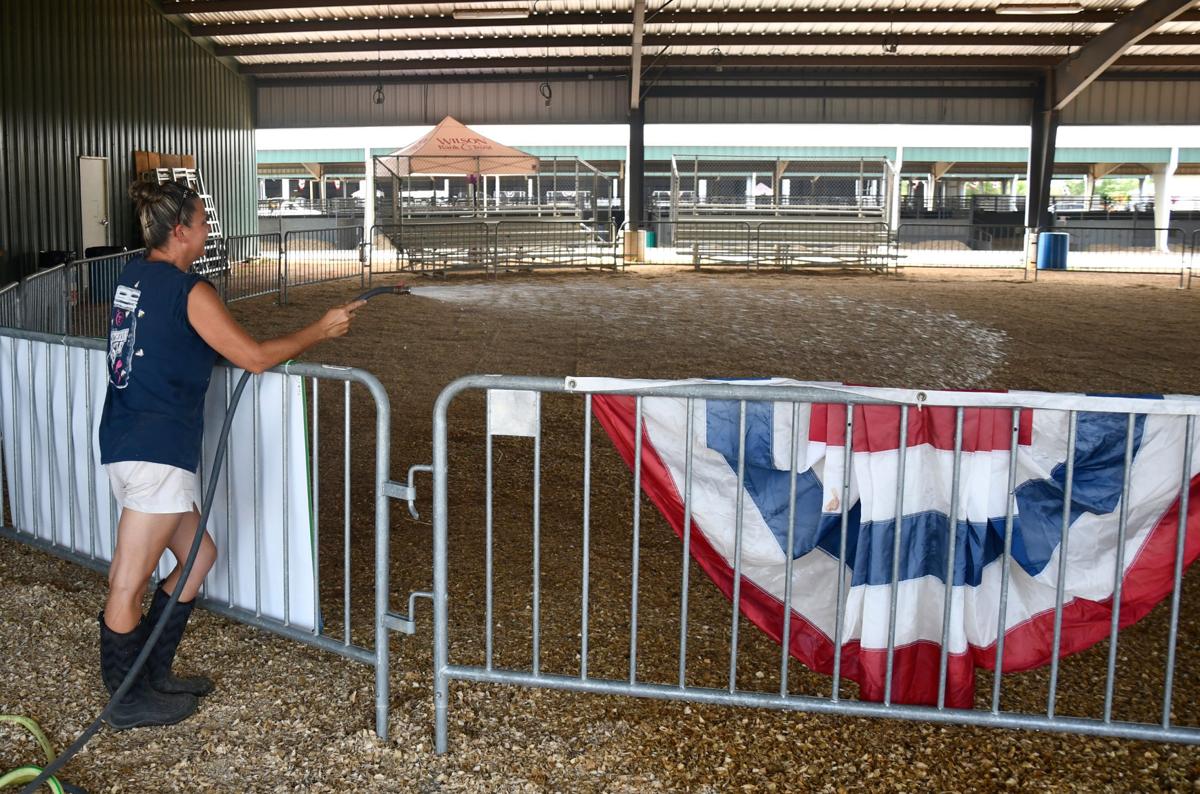 Top Right: Wilson County employee Kendra Stanford wets down a cattle arena Tuesday at the Wilson County fairgrounds in preparation for the livestock shows. The county owns the grounds. 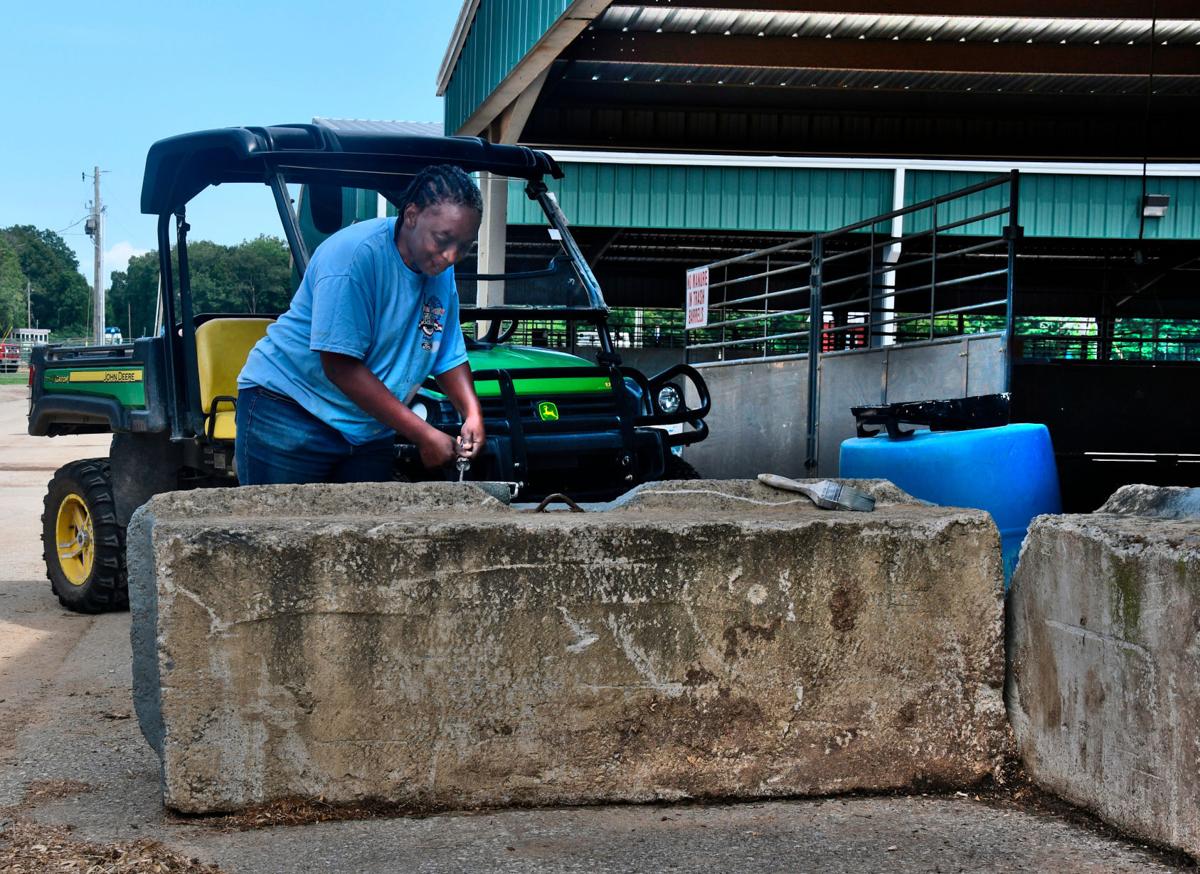 Wilson County Fair livestock shows superintendent Terry McPeak, right, talks with fair sponsorship coordinator Shari Bazydola on Tuesday at the fairgrounds. It was all hands on deck this week to get ready for the event.

Top Right: Wilson County employee Kendra Stanford wets down a cattle arena Tuesday at the Wilson County fairgrounds in preparation for the livestock shows. The county owns the grounds.

The Wilson County Fairgrounds is busy this week with much anticipated livestock shows.

Unlike years past, there won’t be hundreds of thousands of people wandering the grounds in east Lebanon. COVID-19 took care of that, forcing the cancellation of the Wilson County Fair. But, largely to benefit the youths of the region, organizers have gone ahead with the livestock portion of the fair.

Terry McPeak, a member of the fair’s executive board and superintendent of the livestock shows, said last week that plenty of steps are being taken to make sure the mere thousands of participants will be safe.

Traffic into and out of the livestock area, which is adjacent to Tennessee Boulevard, will be one way. There will be plenty of hand sanitizing stations available. Youth participants will be required to wear masks and masks will be available to be given out. Judges and staff will have their temperatures checked every day. Bleachers have been set up to encourage social distancing. And even the animal pens and arenas have been rearranged so people will not be crowded together.

McPeak said staff took guidance from the state Department of Agriculture and Department of Health and used their own judgment to come up with a safe environment.

And that environment could see a record number of participants, both human and animal.

“It’s looking real good,” McPeak said. “Last time I looked, we had close to 400 dairy goats registered, which may be a record this year.”

McPeak said many livestock events have been canceled, not only in the state but in the region, this year because of the pandemic that he expects more registrants than usual. Already, there have been entries from Georgia, Alabama, Kentucky and Indiana.

More than 50 youth livestock shows will be judged through Aug. 23, along with 20 state, regional and national qualifying events featuring beef and dairy cattle, pigs, sheep and goats. State 4-H livestock judging competitions will also be held.

In addition, one of the recent highlights of the fair, the birthing barn, will return with the livestock shows.

Jennifer Apala, of Edwards Feeds in Lebanon, which sponsors the barn, said she and Tim Edwards decided to go ahead because of the importance of having people understand the critical role agriculture plays in everyday life.

“We just wanted to keep agriculture education going, even with COVID,” she said. “Farmers still have to grow their crops and tend their animals even in a pandemic.”

Among the animals scheduled to give birth over the next week or so are beef and dairy cows, pigs, goats and alpacas. A Tennessee Walker horse, bred with a donkey, has already had her mule, and they will be at the barn.

Apala said fundraising for the Agriculture Learning Center, which she and Edwards are spearheading, is on track. About $1 million has been raised to date, with the total cost estimated at $4 million. She said they hope to break ground in December. Donations will be accepted during this year’s show, and they may also be made online at www.birthingbarn.org. The birthing barn’s YouTube channel is also active. Go to YouTube and search for “the birthing barn.”

McPeak said he expects the livestock shows to draw a decent number of spectators, simply for the fact that opportunities for recreational and educational activities have been limited by the pandemic. There will be food and drink tents set up, with some traditional fair food, such as funnel cakes, available, as well as more substantial fare. There is no admission charge for the shows.

Helen McPeak, Terry McPeak’s spouse and executive director of the fair, said, “We are just tickled to death to be able to have this show for the youth.”

Terry McPeak thanked the many community sponsors who contributed the more than $100,000 it is taking to put on the shows.